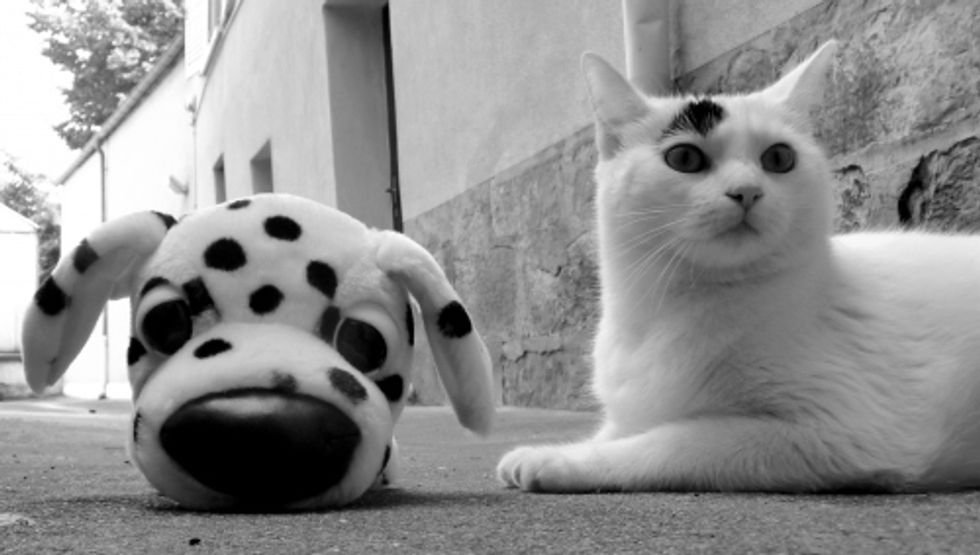 Mimo, the Cat with a Black Spot

Mimo, an almost white cat with a black spot on his forehead is now 2 years old. When he was a little kitten, he was found abandoned in a garden in France. OoPsy learned about Mimo through a friend who rescued him and decided to bring the little one home with her. Mimo's black smudge has become his signature and makes him a real eye-candy.

"It was a great surprise to see a white kitten with a black smudge on the forehead," said OoPsy.

Like many other cats, Mimo is obsessed with boxes. He loves to chase after flies and sleep for hours and hours each day, but Mimo has a natural talent that makes him stand out.

Mimo is a natural in front of the camera. He gives different poses and often surprises his mommy what he is capable of. OoPsy even started a blog for Mimo and YouTube channel to document his everyday life. "It is always a pleasure to see that people like his pictures too."

"I love Mimo even though sometimes he bites and scratches me a little, he is a cool cat and always keeps me entertained and happy."

"Mimo's favorite toy is nothing that I bought from the pet store. He loves an aluminum foil ball. He can spend hours playing it. I often end up finding many aluminum foil balls scattered around the apartment."

"The best moment with Mimo is when he comes to wake me up in the morning, petting my neck with his paws and licking me on my face. It is the most beautiful thing to me."

Check out this video of Mimo when he was a little kitten.