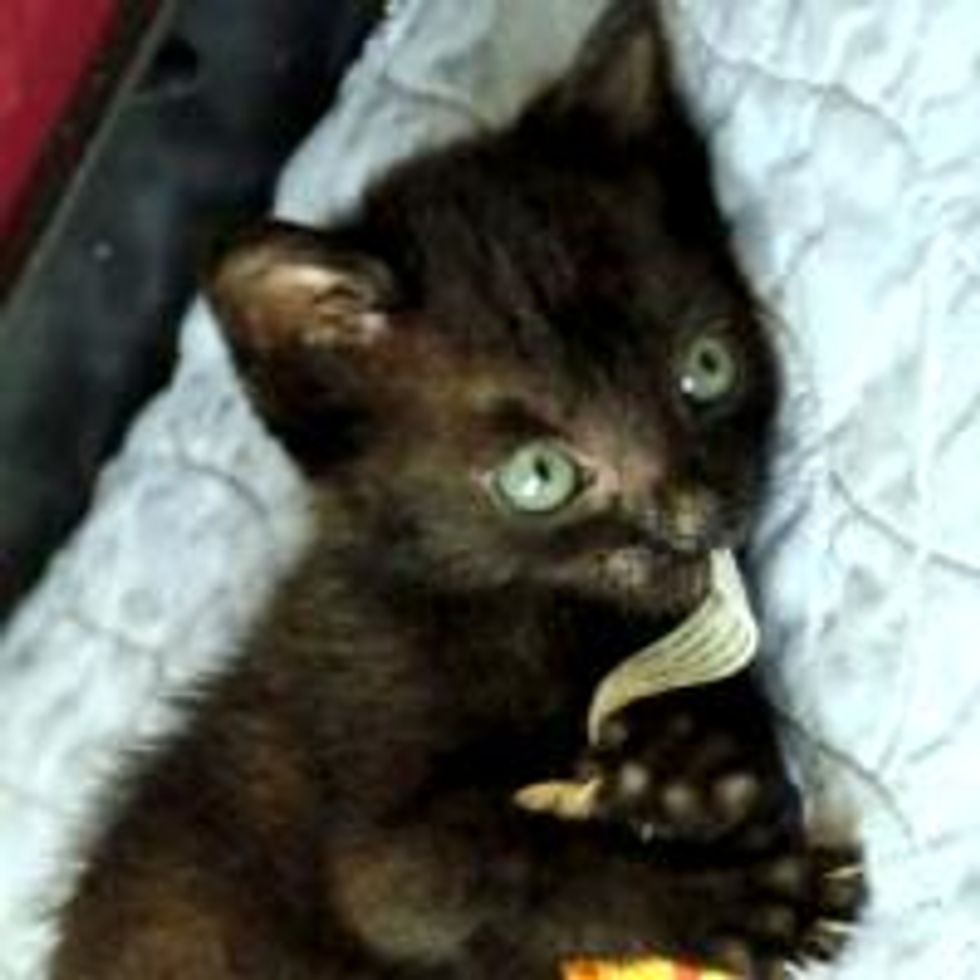 Tony the Runt of a Rescue Litter Perseveres

After rescuing four small stray kittens without their mother, a fifth, much smaller kitten was found. "On Auguest 8th, 2012, he came to join his siblings. He had a very rough start, but persevered, and is currently doing well," said Robyn Anderson.

They named him Tony (Rocky Horror) "He is teeny tiny, the runt of the litter." He went through some ups and downs. One time "We truly thought he had passed away. Fred picked him up, and then Tony’s mouth opened. I wrapped him in a warm blanket, and brought him downstairs, where I sat on the couch with him. He was so cold and still and barely breathing, that we both believed it was only going to be a matter of time. We discussed what to do and decided to try to get some fluids into him. I didn’t think it would do any good, but it was certainly worth a try. So I syringed some Pediasorb into his mouth, which he swallowed. And then I syringed some more in, and he swallowed it. I held him on a warming pad on my lap, and at one point he cried out and arched his back and I didn’t think it would be long. I think it was about an hour and a half after we found him that all of a sudden he rolled onto his stomach and looked up at me and said 'What?'," wrote Robyn on her blog.

"When we found him Friday morning, I would have said there was no chance that he was going to make it.... Not only has he started eating like it’s going out of style, but yesterday he started PLAYING, and I only wish I had taken the camera upstairs with me when I went up to offer them some wet food at noon. After he ate (and ate and ate and ate), Tony (Rocky Horror) Pickle walked around and batted at toys, and then he play-fought with Polly and with Joe, and in both cases the bigger kittens were fairly gentle with him, but when he thought they were getting the better of him, he growled and yowled, and Polly and Joe backed right off. Oh, he is going to be a force to be reckoned with."

"He’s up over a pound now.... He’s playful, he loves snuggling up with (and beating up on) his siblings, he’s using the litter box faithfully, and last night? Perfect poop. He earned the Gold, Silver AND Bronze medals. From half-dead to the poopin’ champ of the world in 10 short days! Now that, my friends, is a success story," Robyn added on her blog.

Tony had a rough start, but persevered and now thriving!

Eating with his siblings. He's the runt of the litter.

They were rescued by Challenger’s House in Toney, Alabama. More updates at Love and Hisses.