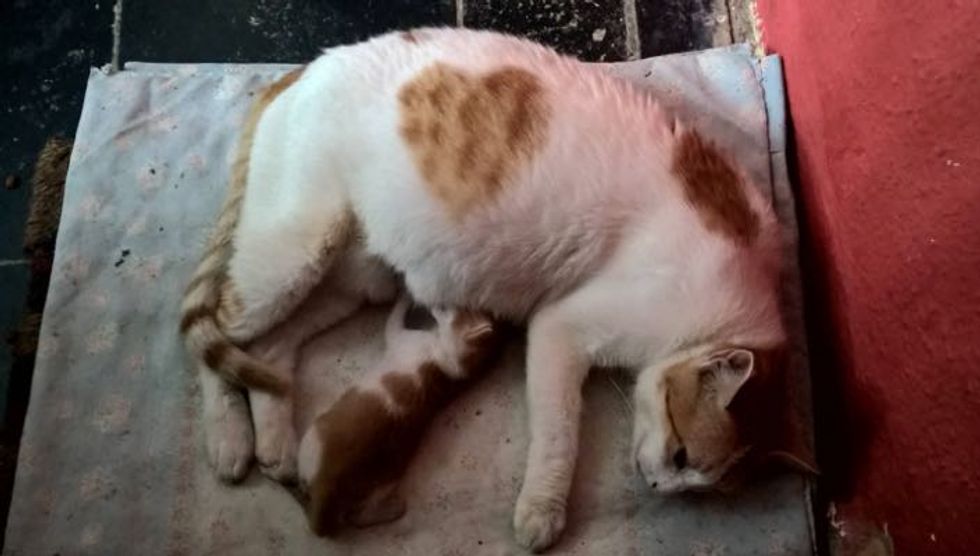 Cat Mom with Sign of Love Brought Her Kitten into Man's Heart!

A young man looks after a stray cat and her little one. The mom cat has a very special mark on her coat. "It's shown very clearly by her love for her little one and the love I have for the two of them."

Sid Balakrishnan shares the story with Love Meow: "This cat and I have a strange history - I saved her from being killed by stray dogs and gave her to the security guards at our apartment complex to look after, because my job was in a bad place and I didn't know if I would be staying long enough to take on keeping her as a pet.

Things eventually worked out in the long run and most mornings I'd wake up to find her on my doormat, fast asleep or rummaging through my trash. She disappeared for a time and suddenly made a return about two months ago, heavily pregnant.

She had a litter of four kittens, of which three didn't make it, leaving this one as the lone survivor."

"I've been going through a rather emotional period and the sudden and dramatic entry of these two into my life almost seems like a sign from the universe - these were the thoughts that hit me first when I noticed the heart on her belly. It's shown very clearly by her love for her little one and the love I have for the two of them.

These two give me some stability and something to look forward to when I come home."

"When the little was just born, she used to bring her down from the terrace just so I could see her. She would then gently place her on the doormat (which I covered with an old pillowcase to make it softer) and choose to sleep on the floor."

Sid is planning to have the mother and her kitten spayed when they are ready. "I don't think that I adopted them as much as they chose to love me in particular... I'll be trying to make them a part of my family as soon as we can establish some strong bonds of trust, because she's still somewhat feral in her behaviour, though her young one doesn't have to grow up that way."

"These two have been the greatest thing to become a part of my life and it's amazing how endearing they've become by their dependence on me."

He bought the kitten a mouse toy and hours later found her like this...