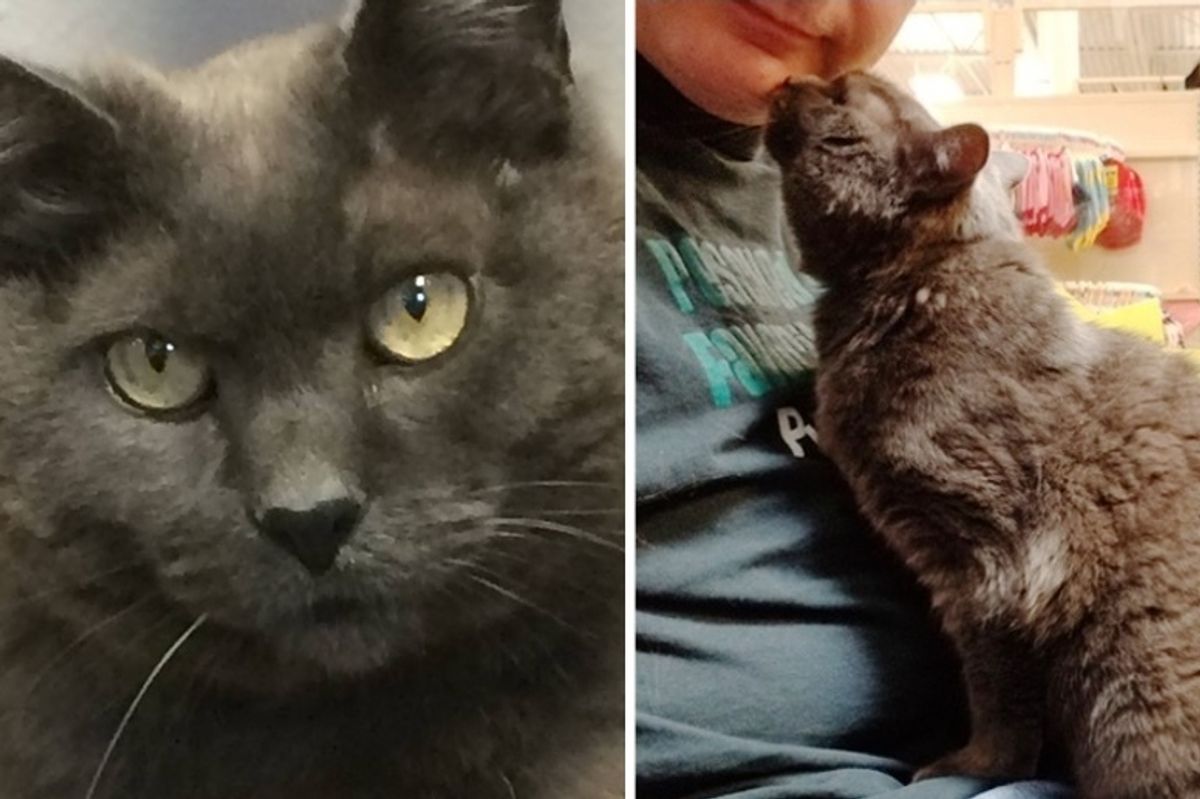 A 12-year-old cat named Roxanne had a rough life before she was rescued. She was very unhappy and shut down until a man came to visit her. 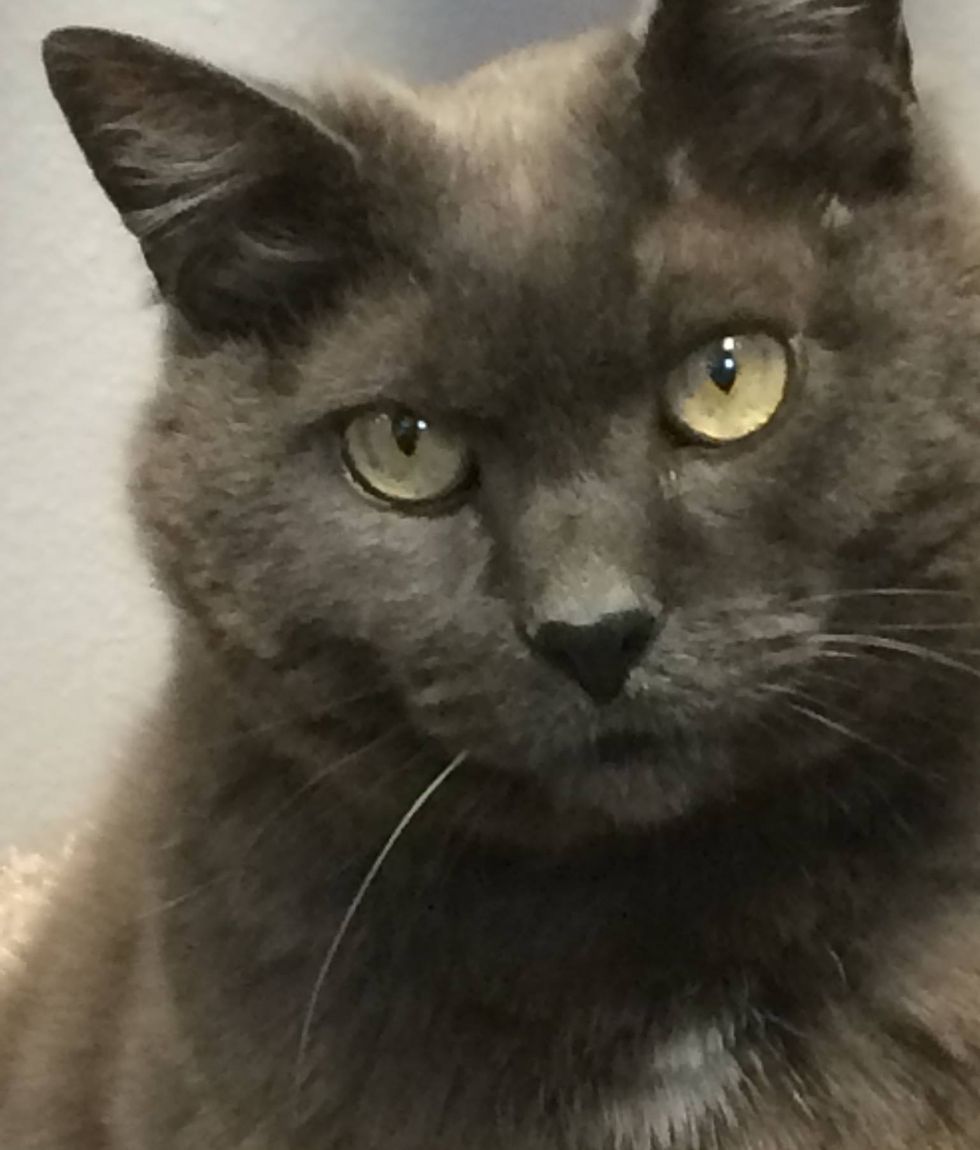 Roxanne was found as a stray in distress and taken to a public shelter, where they discovered that she had ingested a rock and needed life-saving surgery to remove the foreign object from her stomach.

"After she was recovered and had been there a few months, they made the decision to transfer Roxanne to Purrfect Pals (in Arlington, Washington), where she would have all the time she needs to find a new, forever home," Purrfect Pals shared with Love Meow.

When Roxanne arrived, she was very shy and not fond of others cats. She kept herself alone, away from everyone. "This poor girl just hates being in the adoption room with other cats, so she has been a hissy, swatty, unhappy kitty most of the time she's been with us." 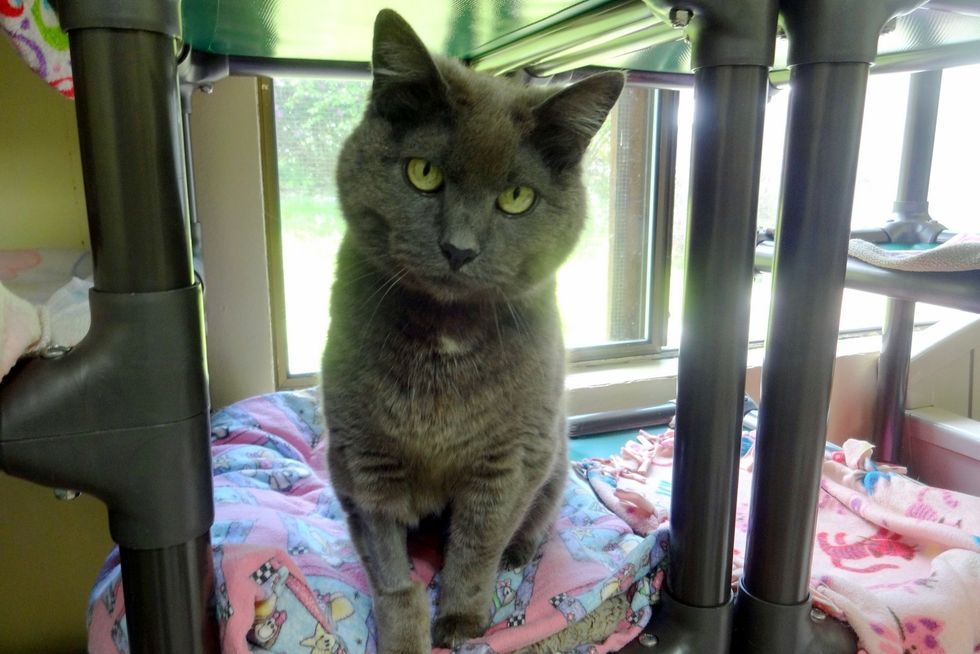 While other cats went to their new homes, one by one, Roxanne found herself overlooked as no one got to see her true colors.

A few weeks ago, John, who fosters for Purrfect Pals, came to visit Roxanne. He sat down next to her. After a minute of adrenaline fueled fight-or-flight time, Roxanne decided to stay as she realized that he meant no harm. 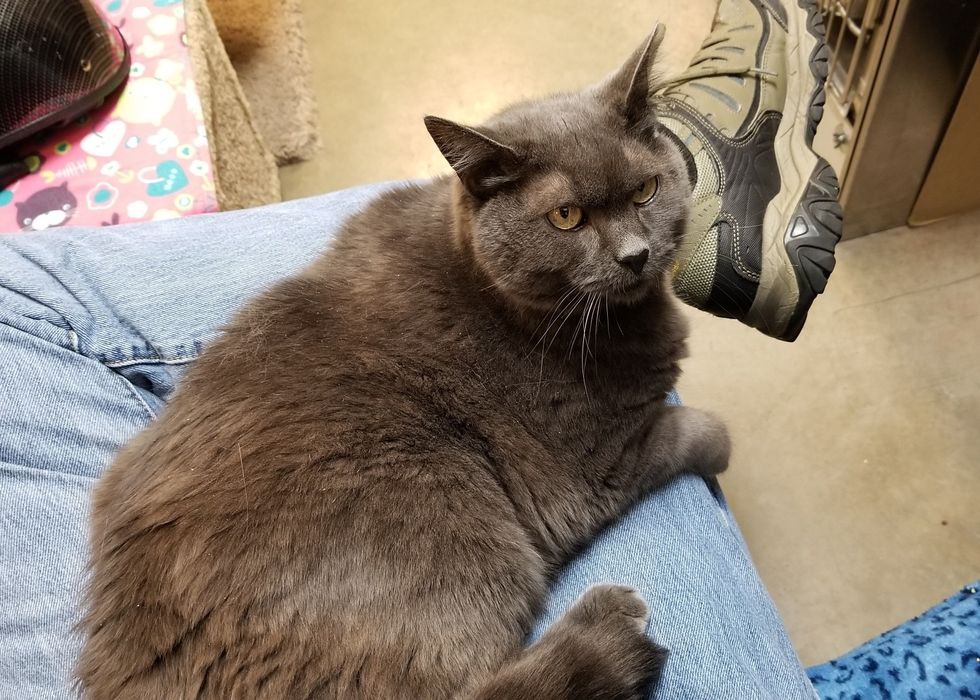 Once she was calm, John began to pet her and was instantly met with the loudest purrs. Roxanne the grumpy cat turned into a love-bug in a matter of seconds. She even went in for more cheek scritches and didn't want it to stop.

"Roxanne is pretty shut down when left alone but if you go slowly, you can scritch her cheek and she'll melt like butter," John said.

The sweet girl crawled into his lap and purred up a storm. 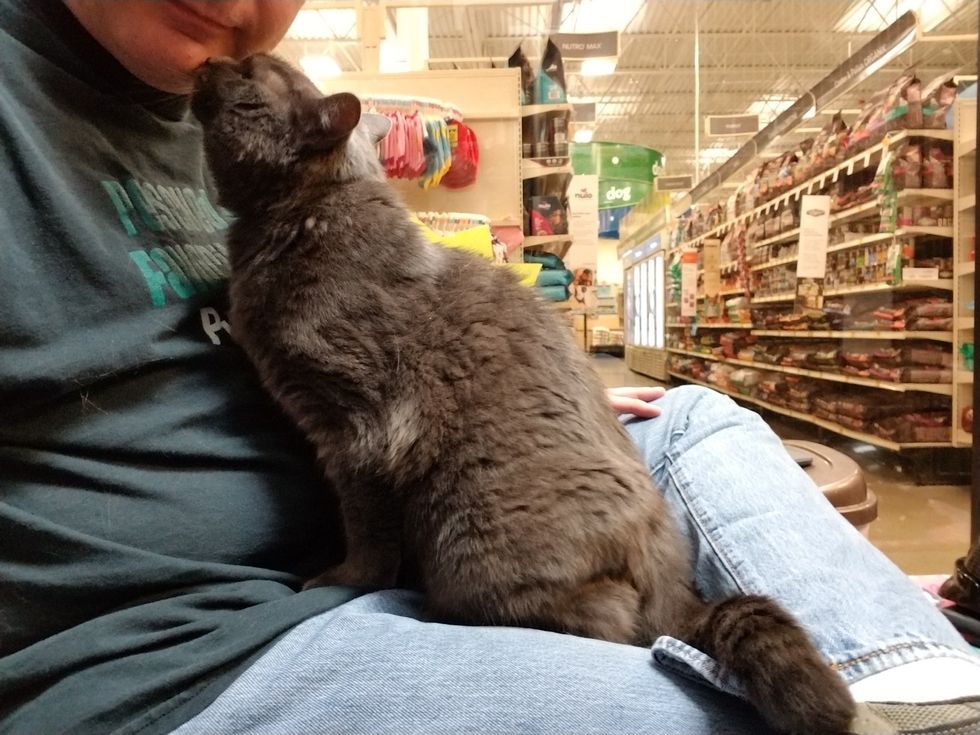 Roxanne spent a lot of time with her new friend that day and was the happiest she had been in a while. "We got to see her true colors when she cuddled up with John and declared life was good," Purrfect Pals added.

Knowing that Roxanne thrives in a household where she can be the only cat, John (who has several cats at home) hopes someone special can give this sweet girl a home of her own. 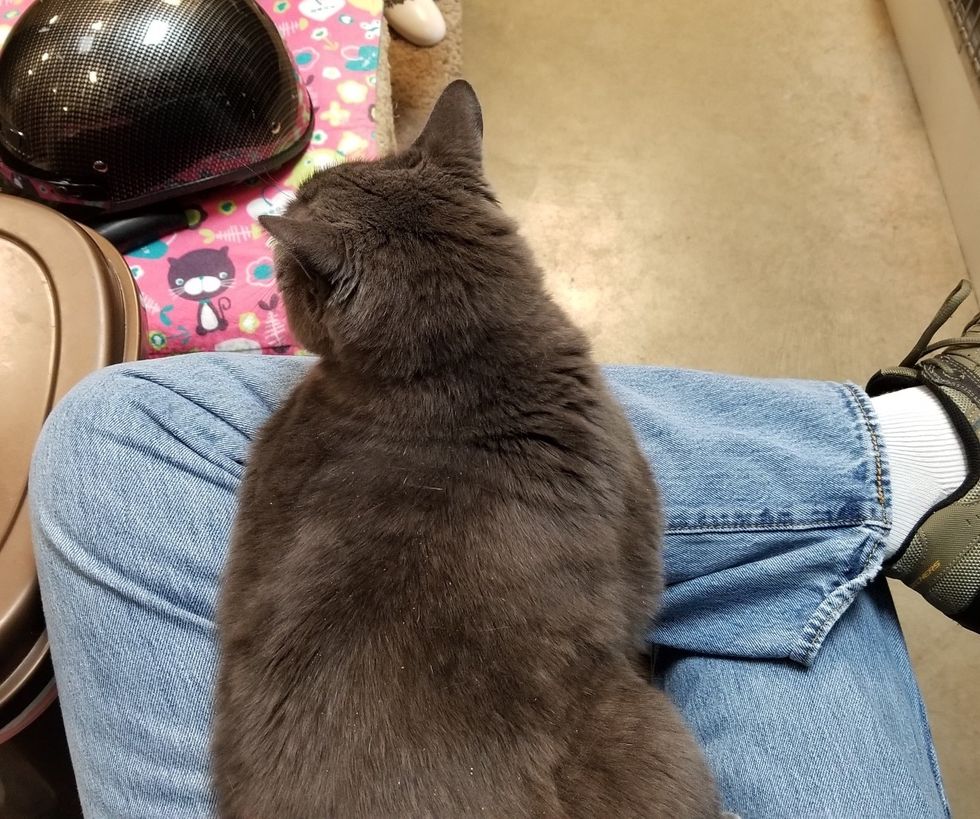 "This slate-gray 12 year-old girl with the tiny 'charm' of white fur on her chest is hesitant with new people and situations but once she feels safe, she loves your attention," Purrfect Pals said.

"She enjoys it when you coo or baby talk to her and she likes being brushed. Roxanne is a darling older lady seeking a safe harbor with someone to love and cherish her." 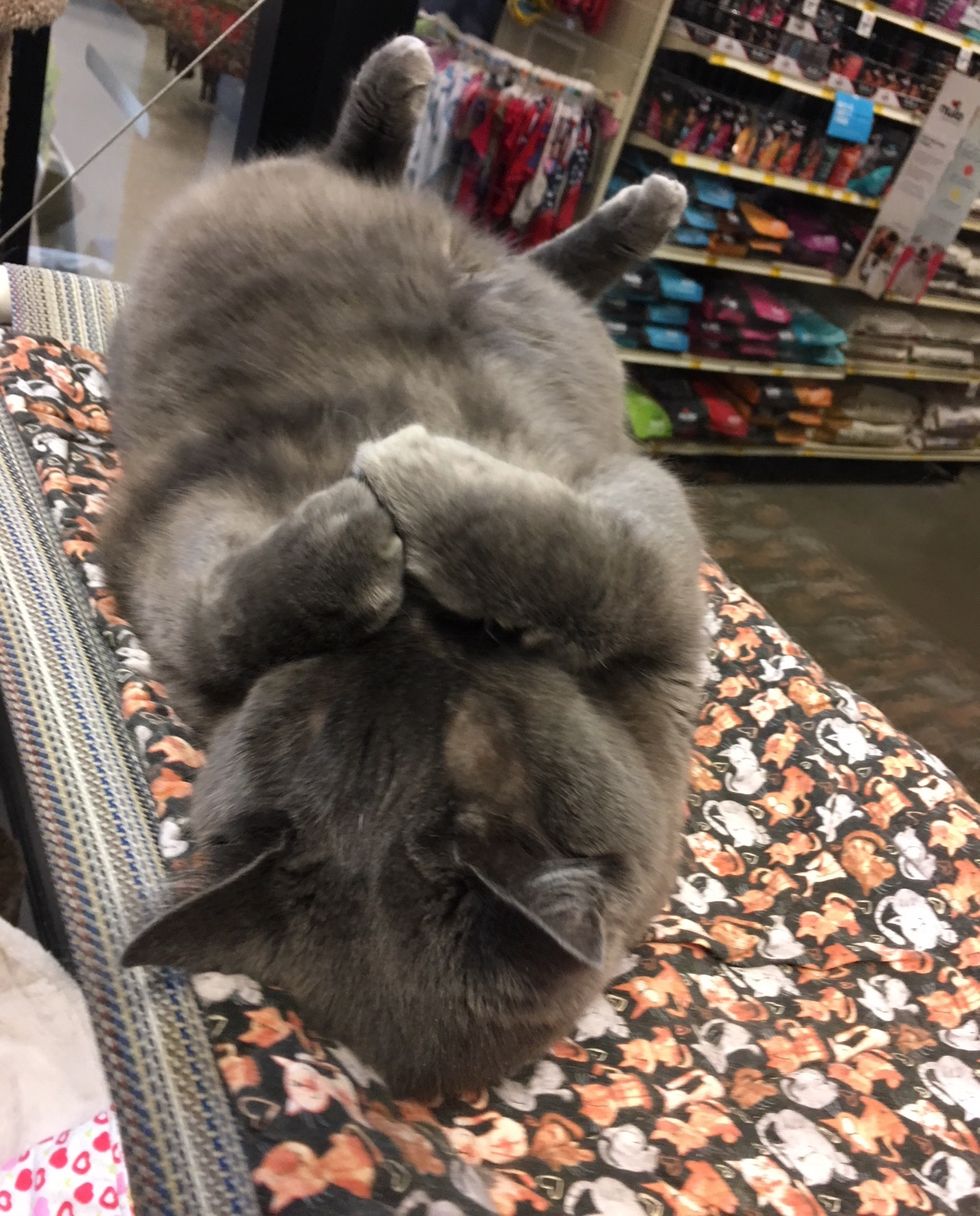 After more than a decade, Roxanne is now safe and healthy, waiting for the right person to take her home and spend her golden years with. 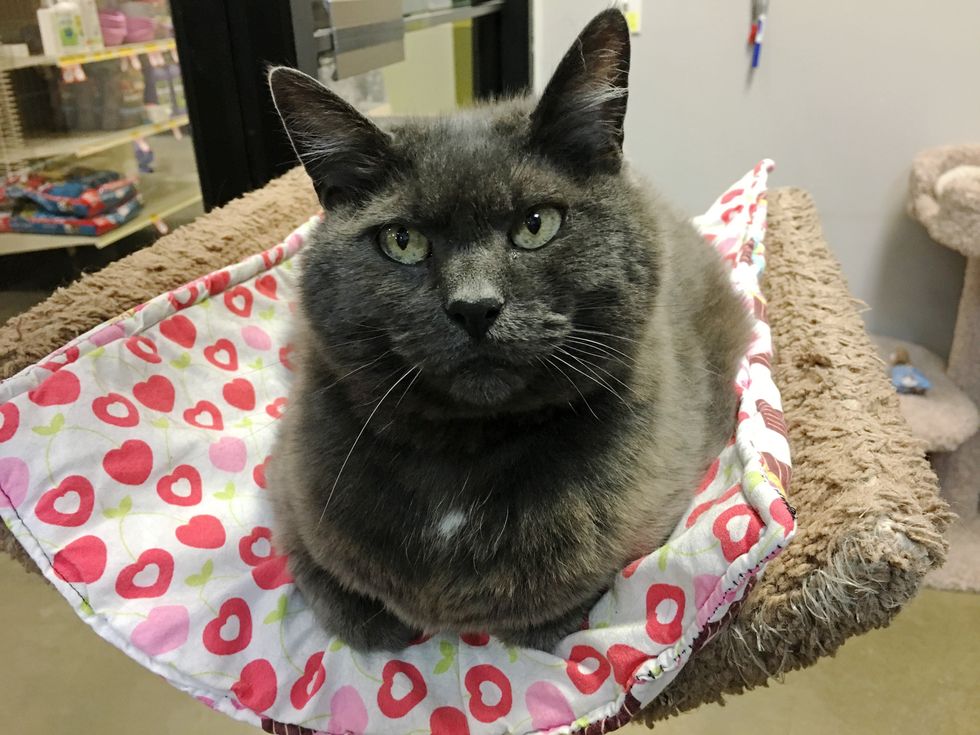