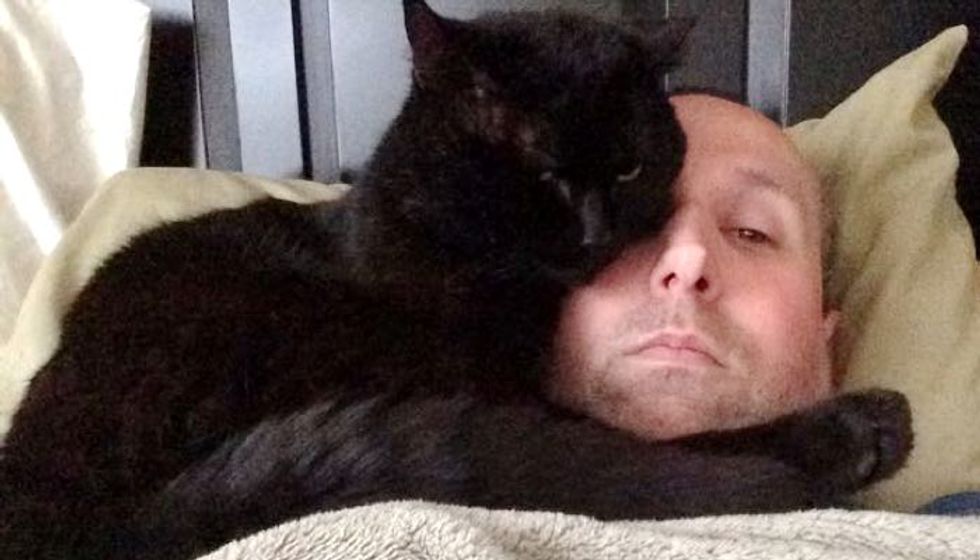 This cat spent most of his life as a stray until he came into a man's life and everything began to change.

"Joe (formerly Hobo Joe) showed up maybe 3 years ago. He would hang out in the yard, sleeping on the porch at night, and sit with us when we would go outside to visit (which was often)," he said.

Sometimes Joe would disappear for days then showed up again, following them out on a walk or spending time visiting other houses.

"Most mornings he would walk with me and the kids to the school bus stop, waiting with us, than following me back home. When it got cold outside we put a shelter on the porch for him. I'd warm towels in the dryer and put them in his house before going to sleep but he became very congested and winter grew colder so we let him stay overnight inside. Soon the time between his roaming and returning home got longer."

"One day he left and after a week we grew really concerned. I'd walk around the neighborhood calling for him and for weeks I would go outside and call him but still no Joe. We thought the worst. It seems like he had been missing forever but I kept calling for him often.

He finally showed up, running to me one afternoon after calling for him. We were very happy but he looked like he had been in a fight, soaked, covered in mud, and was looking really rough. We had already took him to the vet earlier in the year, they loved him, and he healed up from his final outside adventure quite quickly."

That marked the end of his stray life. It was time for Joe to settle into a home.

"He was tough as nails years ago, as a stray... I hated that such a good cat had such a rough life and always worried. There was no way we were going to put him back out. He seemed fearless but age was catching up to him and he needed to settle into a home."

Now Joe is strictly an indoor cat, neutered and happy. "Joe is the best and I think he likes us."

It's been a couple wonderful years since Joe moved into his forever home. There's nowhere else he'd rather be.

Share this story and help a kitty in your area find their forever home!