A kitten with large eyes and a big voice is determined to thrive after she was found on top of a garden wall. 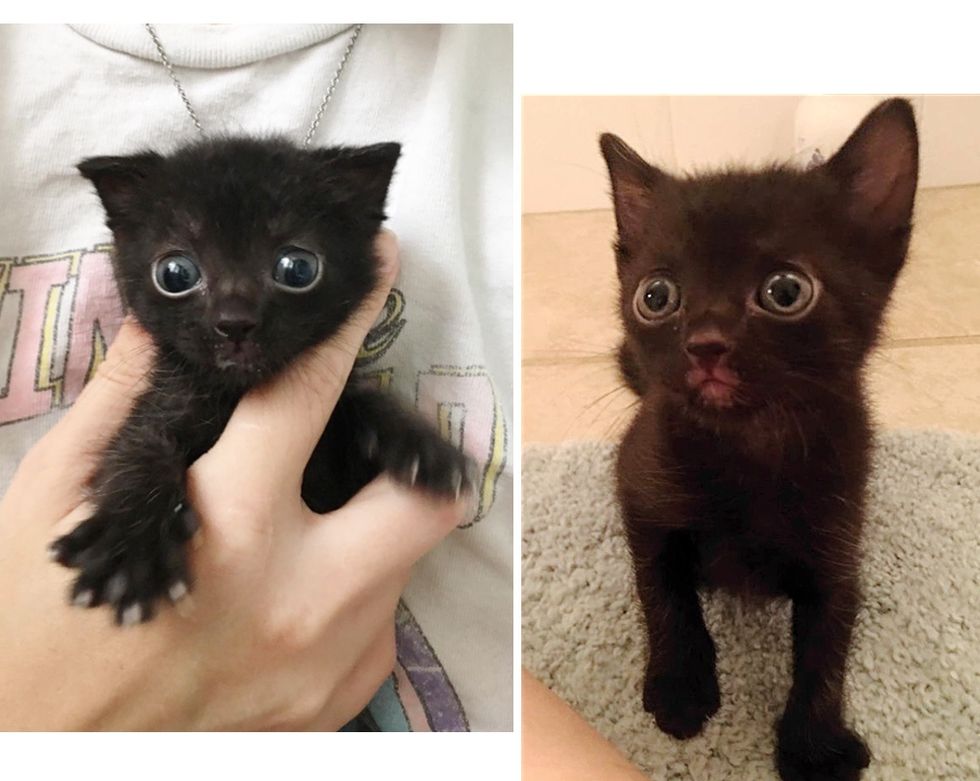 A tiny kitten's loud cries saved her life when a Good Samaritan was alerted by her screams and found her on top of a garden wall. They reached out to Wrenn Rescues, a volunteer-run rescue group in Southern California, when the kitten's mother never came back for her.

The kitten was very hungry, meowing at the top of her lungs for food. The tiny ball of fur showed incredible resolve and strength at just a few days old. She had a strong voice that kept her going.

Ashley Kelley, an experienced fosterer of Wrenn Rescue, didn't hesitate to help. "She'd been screaming all night (before she was rescued). She was very hungry. I was happy to take her in," Ashley shared. 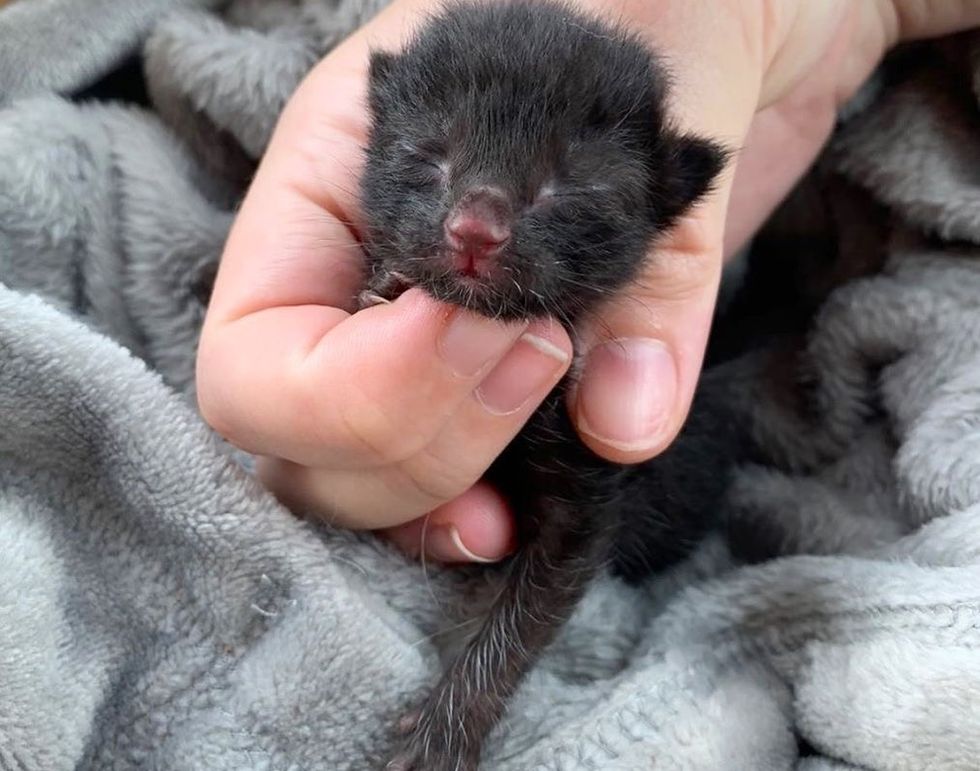 The kitten named Beatrice latched onto her bottle like a champ and scarfed down the food as if there was no tomorrow. After getting a full belly, she was tucked into her safe nest inside an incubator and fell fast asleep.

The little panther kitty made it her mission to grow big and strong. Over the next few days, she ate to her heart's content at every feeding and wouldn't let a single drop of food go to waste. "She ate so much and was growing like a weed," Ashley said. 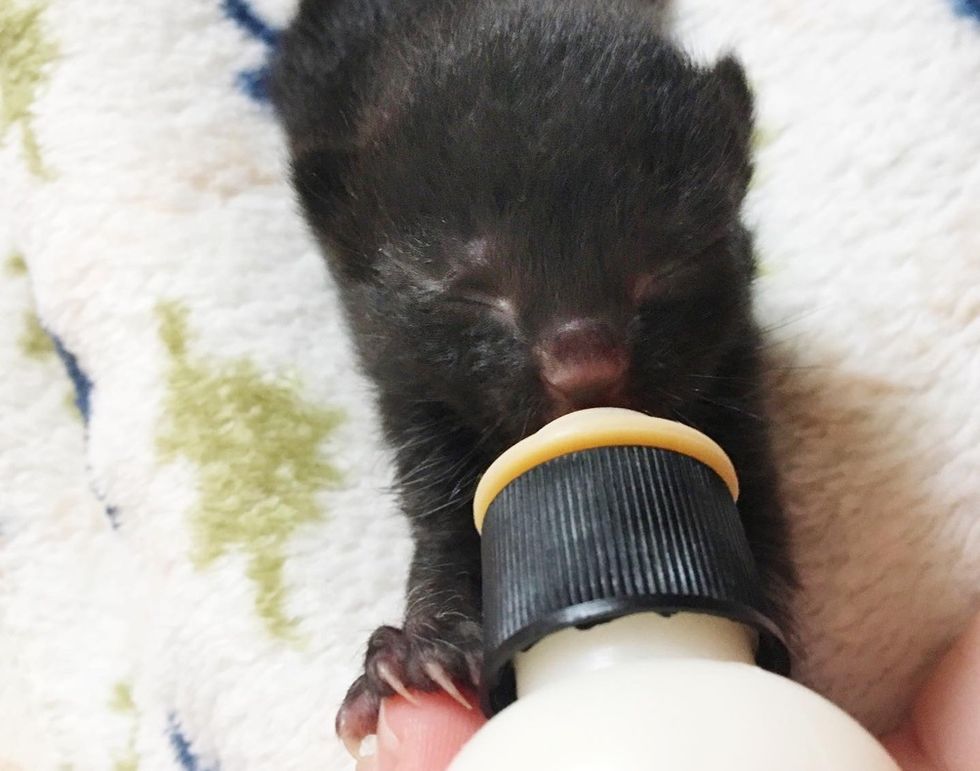 Her eyes finally cracked open a few days later. They were big and wide and full of wonder.

"Miss Beatrice's eyes somehow got bigger every day. When she looked up and really saw me for the first time, it was one of my favorite, most rewarding moments." 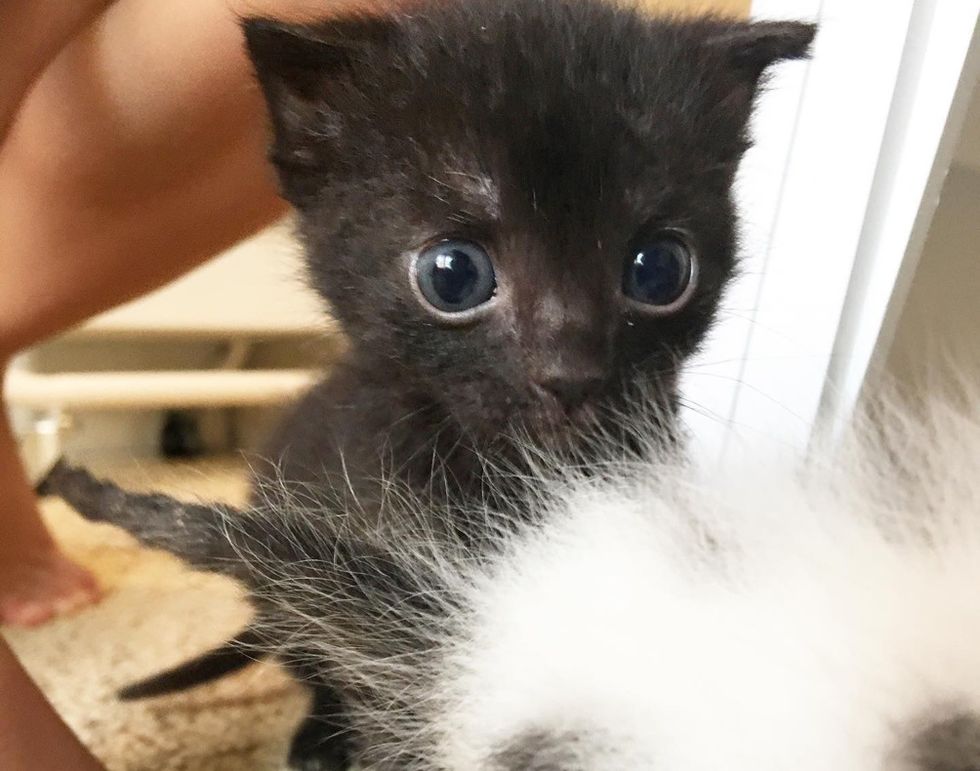 The little panther kitty quickly outgrew other foster kittens in the house, despite being younger. She was never shy of making her voice heard when she wanted attention or demanded her trusty bottle.

"She has one of the loudest voices I've ever heard," Ashley shared. 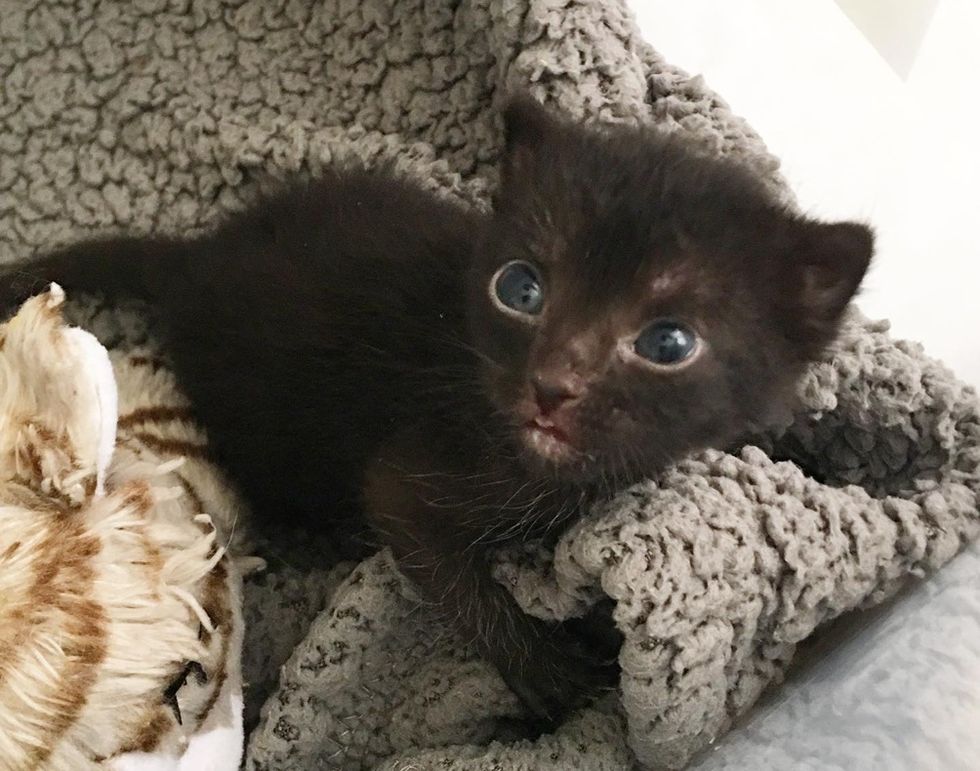 Beatrice had her foster mom wrapped around her finger. She'd stare at her human with those big doe eyes whenever she wanted extra attention or a second breakfast.

As her vision and hearing continued to develop, the kitten discovered her micro claws and inner sass. 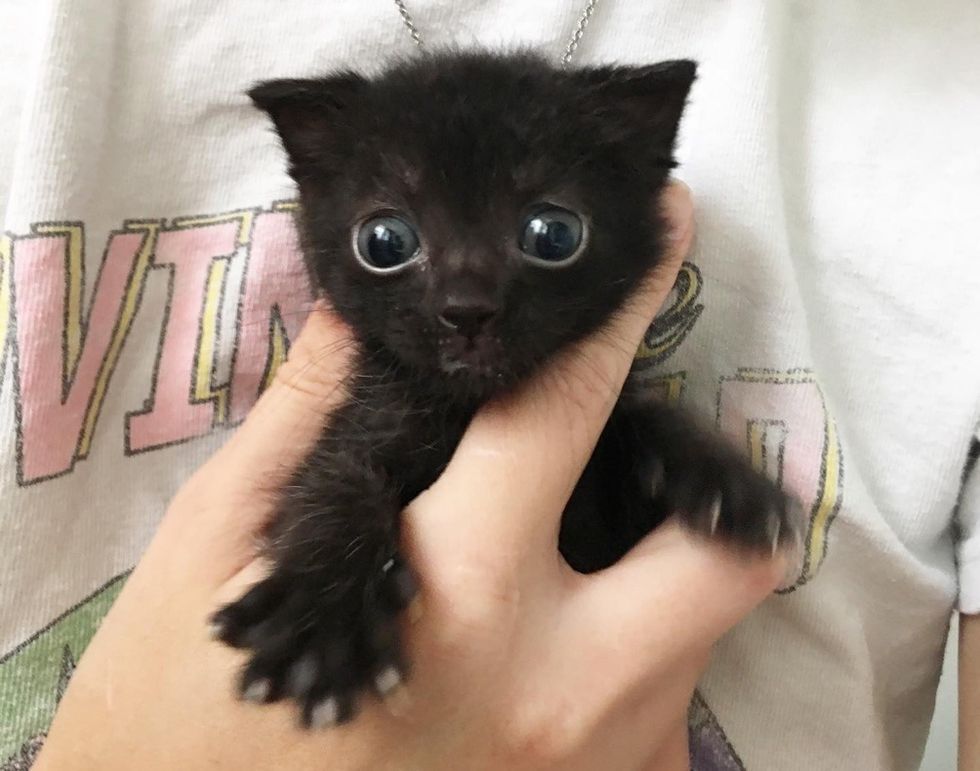 At five weeks old, she was still mostly eyeballs and shaping up to have a very adorable, quirky personality.

This wide-eyed wonder is a natural entertainer, a mischief-maker. 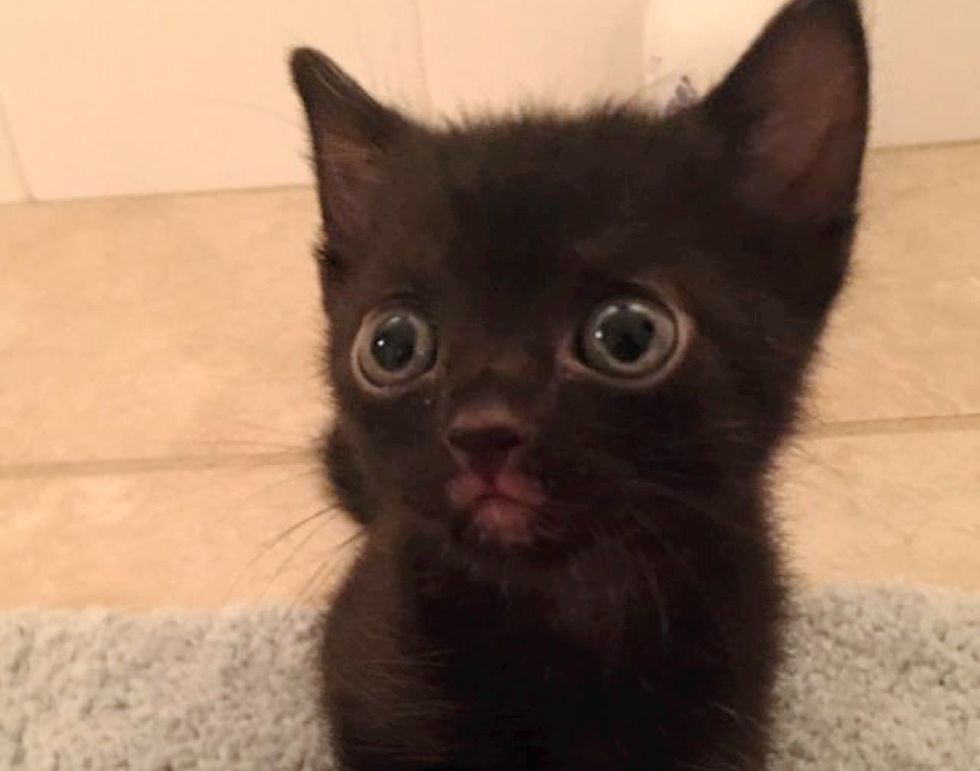 She's grown so much bigger than her foster friends and is turning into a playful and rambunctious little rascal.

To help Beatrice continue to hone her feline skills, they introduced her to a kitten her size -- another singleton named Sweet Potato. 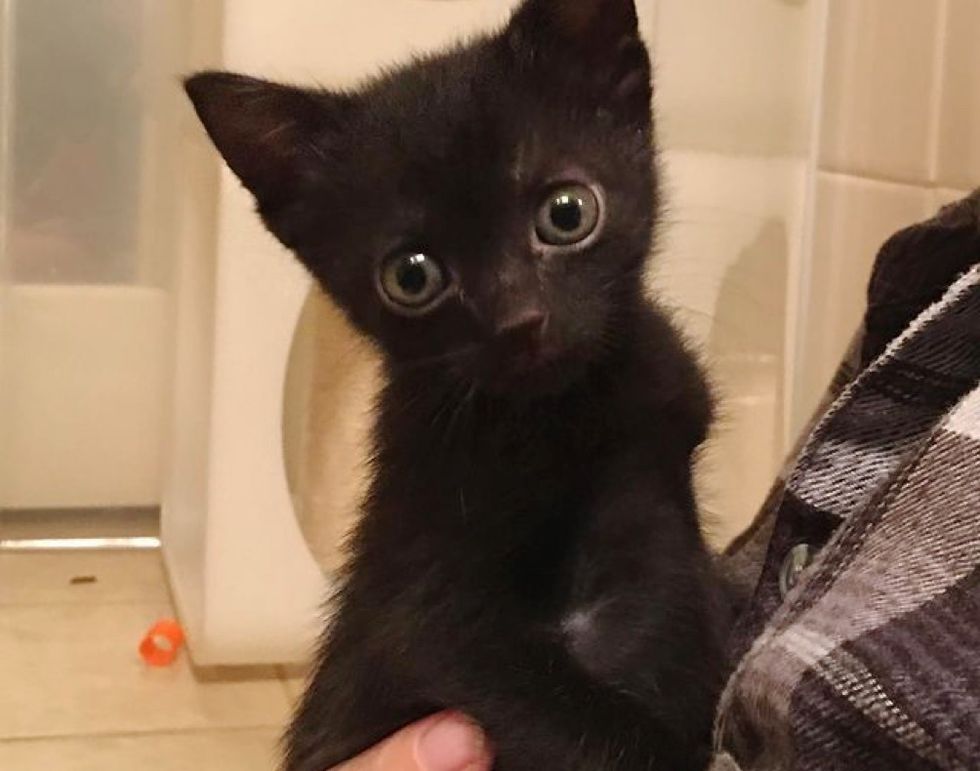 Just like Beatrice, Sweet Potato was rescued by himself and in need of a feline companion.

Soon after they met, they just hit it off and started cuddling. The two instantly connected and began their adventures together, creating antics around the house as the perfect duo. 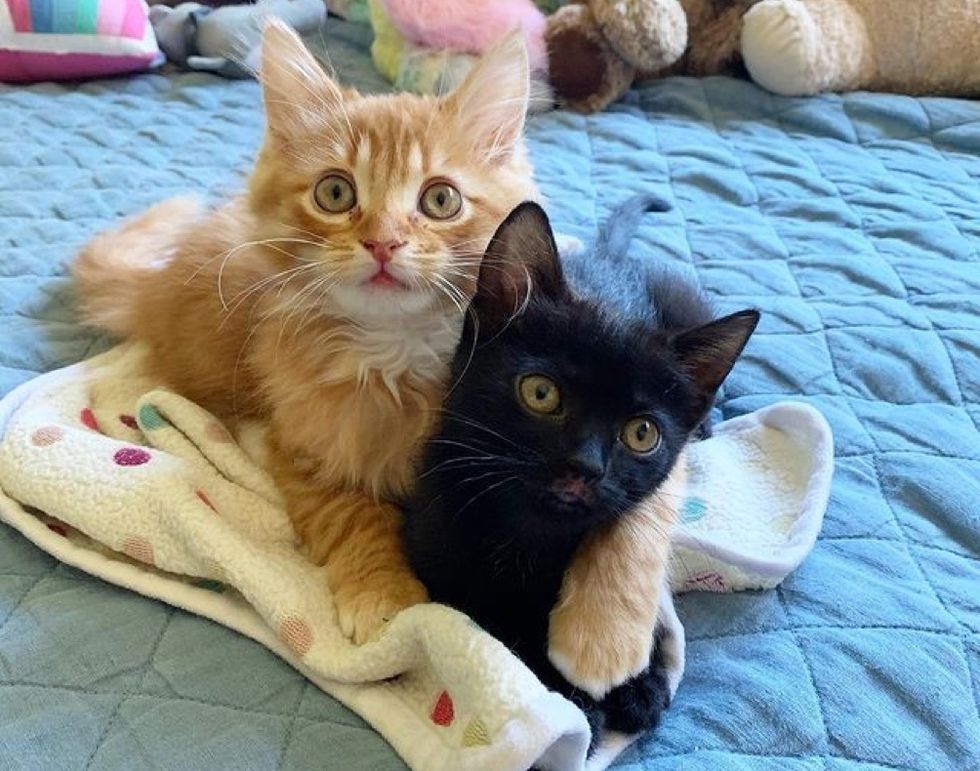 "Sweet Potato and Beatrice really love playing the 'Find the Kitten' game with me," said Alissa Smith, their new foster mom. "They are getting better and better at it. And they will totally stay still til I find them and then I get pounced on."

Beatrice and her partner in mischief are thriving in foster care. They enjoy playing amongst all the snuggle toys and running around the room with their unbridled energy. 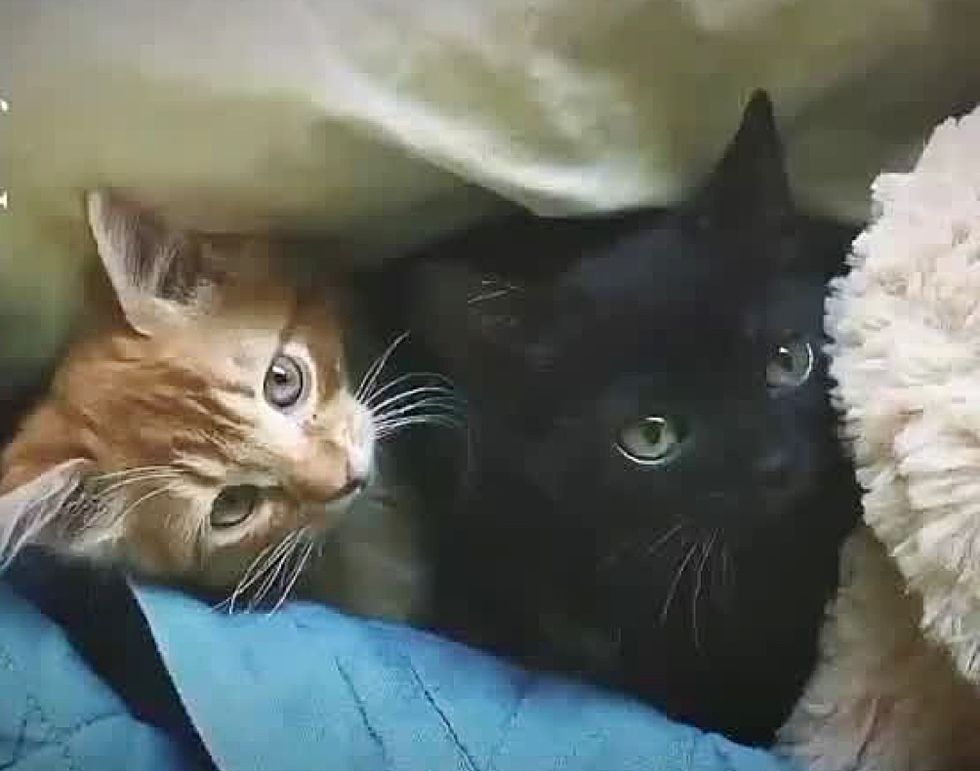 "She is having so much fun with him now! We are going to be looking for a home for them together in a few weeks," Ashley added.

"I'm so happy that Beatrice has a buddy her size and energy level." 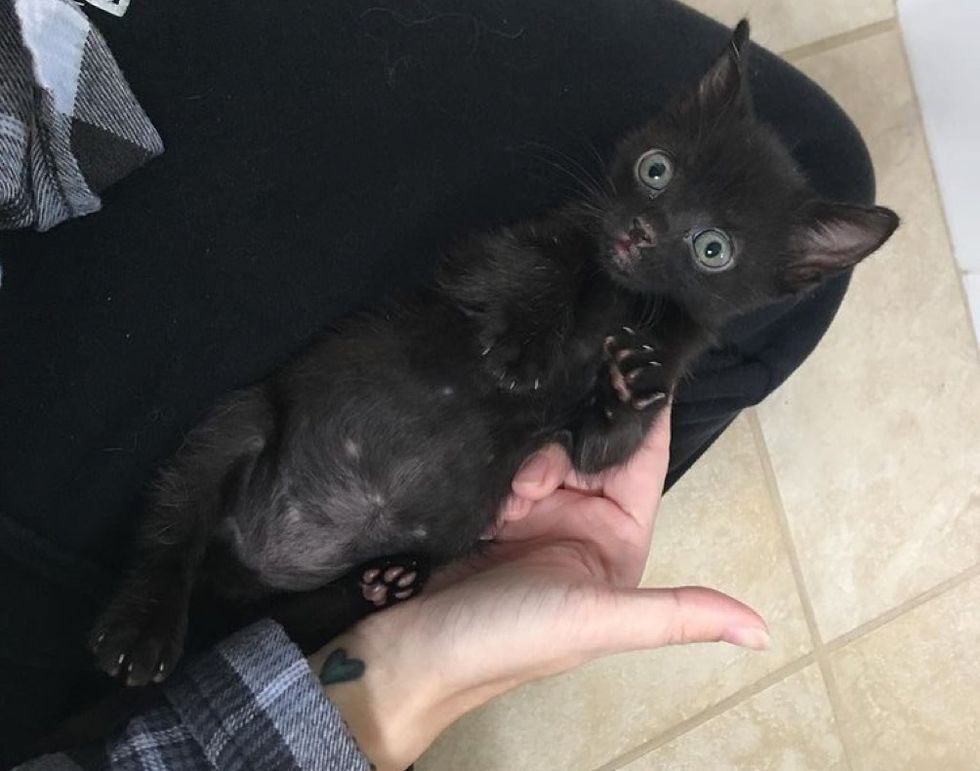