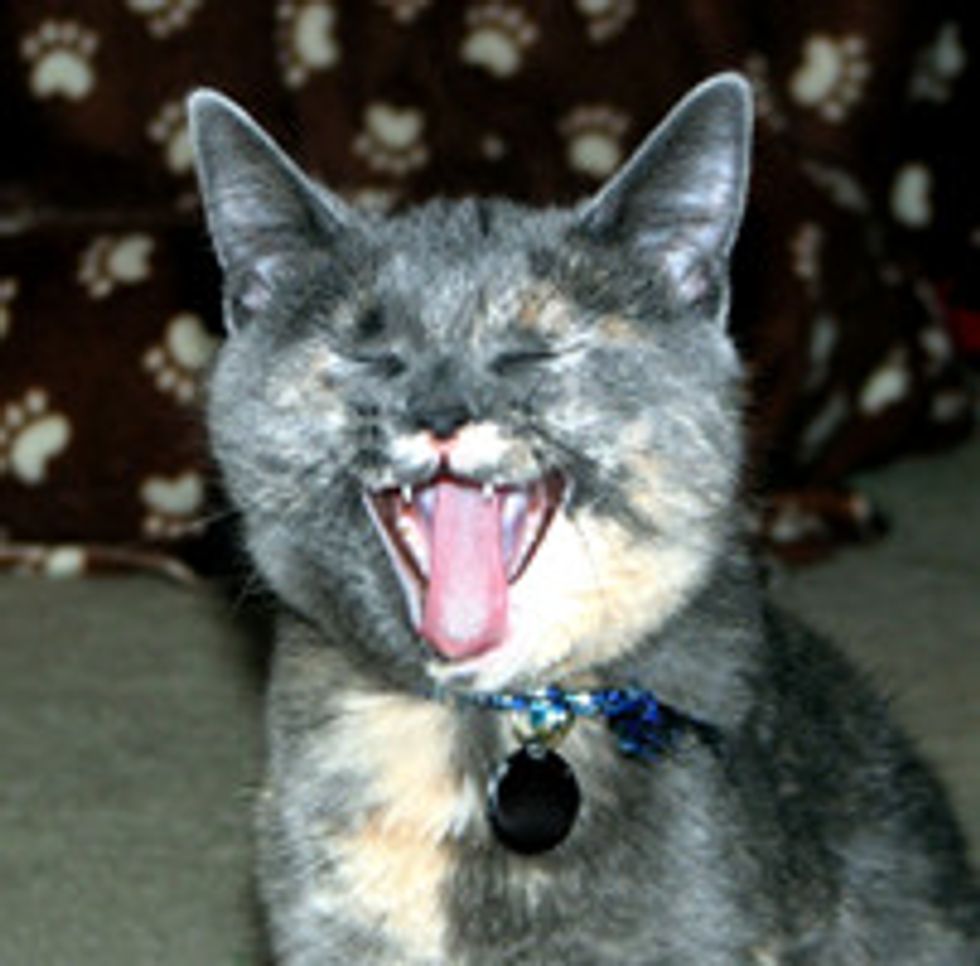 Meet Refurb the three legged cat who accidentally raised nearly $1000 for charity. This is her story.

Refurb was rescued by a kind person from the Animal Humane Society in Minnesota. She was injured by a horse when she was only a month old and lost her back right leg from the accident. “The Humane Society did a great job with her and she recovered admirably well, so she’s Refurbished (aka Refurb). Just as good as a brand new model," said the human, Akslfak.

Refurb gained fame on Imgur back in January 2013. People fell in love with her and her best friend Tycho the dog who came from the same rescue organization. She won a lot of people's hearts with her silly and playful purrsonality.

But the best story of all is her "Refurbographs." “One of the users [on Something Awful] joked that he’d pay for a Refurb autograph – just a little paw print or something. I replied, somewhat sarcastically, that if he were to donate $10 to his local animal shelter, post proof, and email me his address, I would mail him a Refurb autograph. I figured he wouldn’t do it. Less than a week later, there had been 35 donations from all over the US, and six different countries across four continents. Donations are still coming in, too," the human wrote via Imgur.

“The overwhelmingly positive response, along with dozens of people offering to make donations after reading my story, is truly inspiring. I hope that everyone who still wants to help remembers that they have the power to do so, be it financially through donations, adopting an animal in need, or just by donating a few hours of their time to go to their local shelter and play with the cats and dogs. There’s a lot of abused and abandoned animals out there who need us, and spending an hour petting cats at a rescue seems like a better reward than being mailed a paw print any day,” he added.

She was featured on the front page of Imgur, and it was a total surprise to her human.

"I thought it was funny, so I relayed this story on the Something Awful forums just as an interesting anecdote. One of the users joked about whether the friend asked for an autograph, and another user responded jokingly that he'd pay for a Refurb autograph - just a little paw print or something. I replied somewhat sarcastically that if he were to donate $10 to his local animal shelter, post proof, and email me his address, I would mail him a Refurb autograph. I figured he wouldn't do it," the human said on imgur.

"Well, he actually went ahead and posted proof of a donation almost right away. Maybe he was seeing if I was serious... but he sent me his address and I told him I'd do it. At that point, a couple other users asked if I would send them a "Refurbograph" if they donated. 'Sure, why the hell not?' I thought, figuring that was the extent this would go to."

"Less than a week later, there had been 35 donations from all over the US, and six different countries across four continents. Donations are still coming in, too."

"As of now, $900 has been given to animal shelters and rescues all over the world. By strangers on the internet. Buying 'autographs' from my cat. Go ahead and re-read the last few sentences again, just to let the silliness of this set in. By the way, she put up with the paw print making like a champ."

"Now I have to mail dozens of these out. To strangers. From the internet. This is by a wide margin the silliest thing that I have ever done, and yet I don't feel that silly about having helped out some animals that need it. However, I will feel silly when I go to the post office with a postcard of my cat's paw print, asking for postage to Australia."

"People have been sending me pictures of the cards they've gotten"