Cat Befriends Family Dog and Insists on Being Adopted by Them

A couple wasn't planning to add another pet to their family but a tuxedo cat had other ideas. 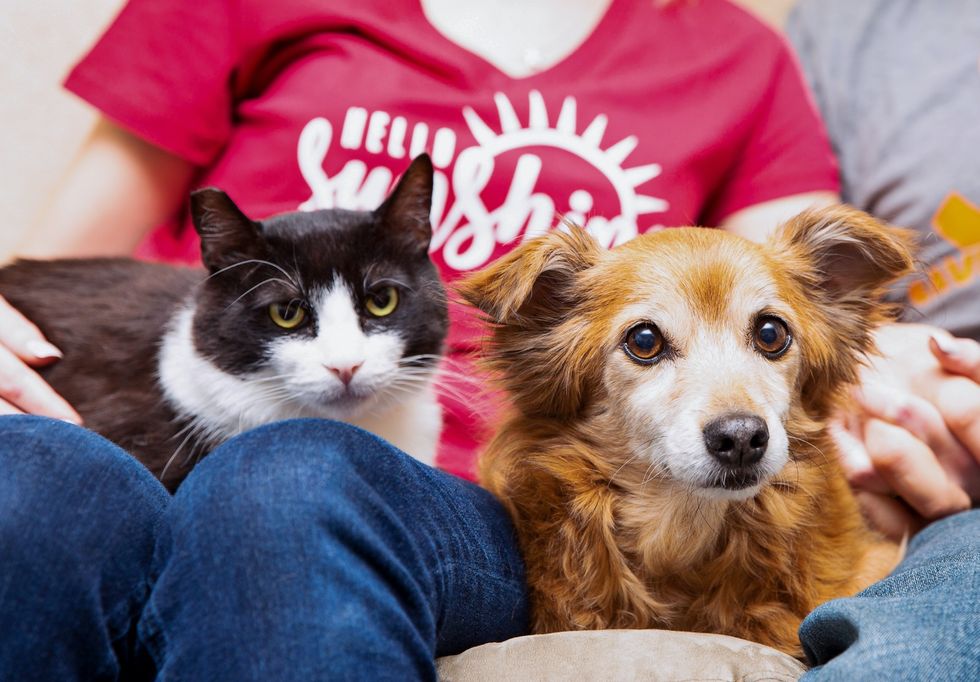 Shortie the cat was brought to Los Angeles Services last year, in need of rescue. He was dejected, cowering away at the shelter. Best Friends Animal Society in Mission Hills, California took him into their care so he could have chance at a better life.

The tuxedo slowly came out of his shell and would rub up against volunteers' legs for love and pets. "He was a gentle soul who loved to be loved and give love in return," Michelle LaPalme, a care specialist at Best Friends, shared with Love Meow.

However, his health suddenly went downhill and was taken to the vet where he received a life-saving blood transfusion from another cat. Later that day, Shortie was almost back on his paws, sitting up and observing things around him — it was quite the miracle. 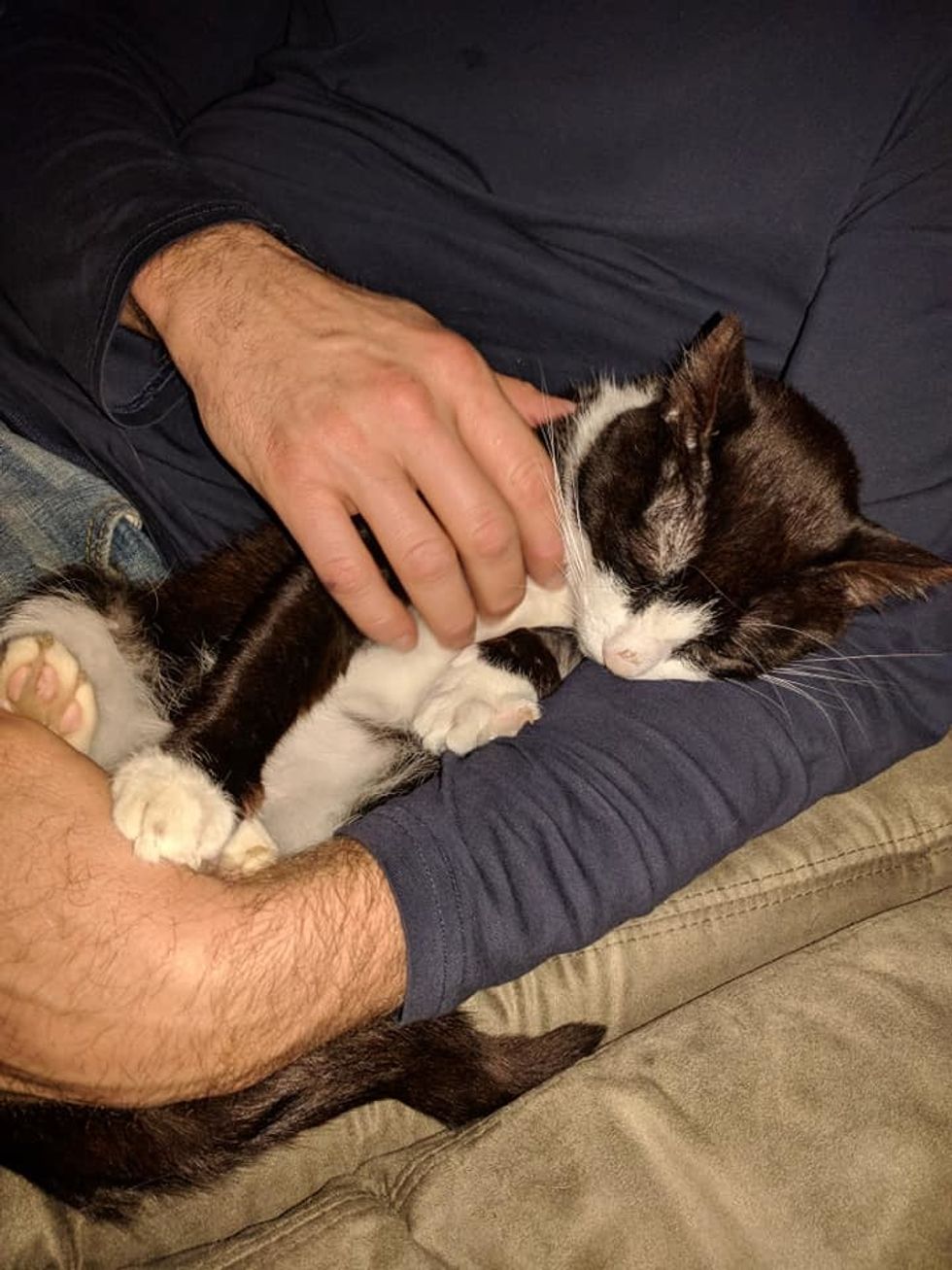 Once he recovered, he was back on the adoption floor, waiting for that special family to come. "I was afraid if he was on the floor too long, he might get sick again (due to stress)," Michelle added. "I just hoped someone would come along soon and see how special this boy was."

Early December, Mamie Maxwell, a volunteer of Best Friends, came across a picture of Shortie from the foster team and knew she had to help. She decided to foster the sweet tuxedo until he could find a home of his own, so she thought. 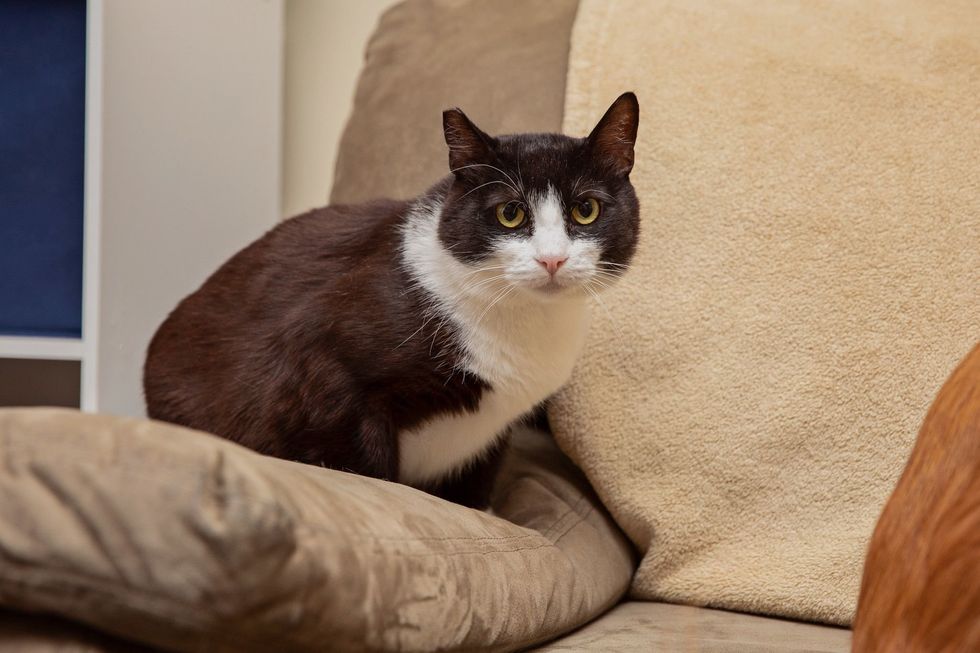 Shortie was very shy the first few days and took refuge under the couch or in the hall closet. The only time he would sneak out was to eat but quickly hurried back to his hiding place.

The tuxedo was hesitant to interact with his foster parents and stayed hidden for about a week. Then one day, when he mustered enough courage to go on a secret excursion to the living room, he spotted Tanner, the resident senior dog. 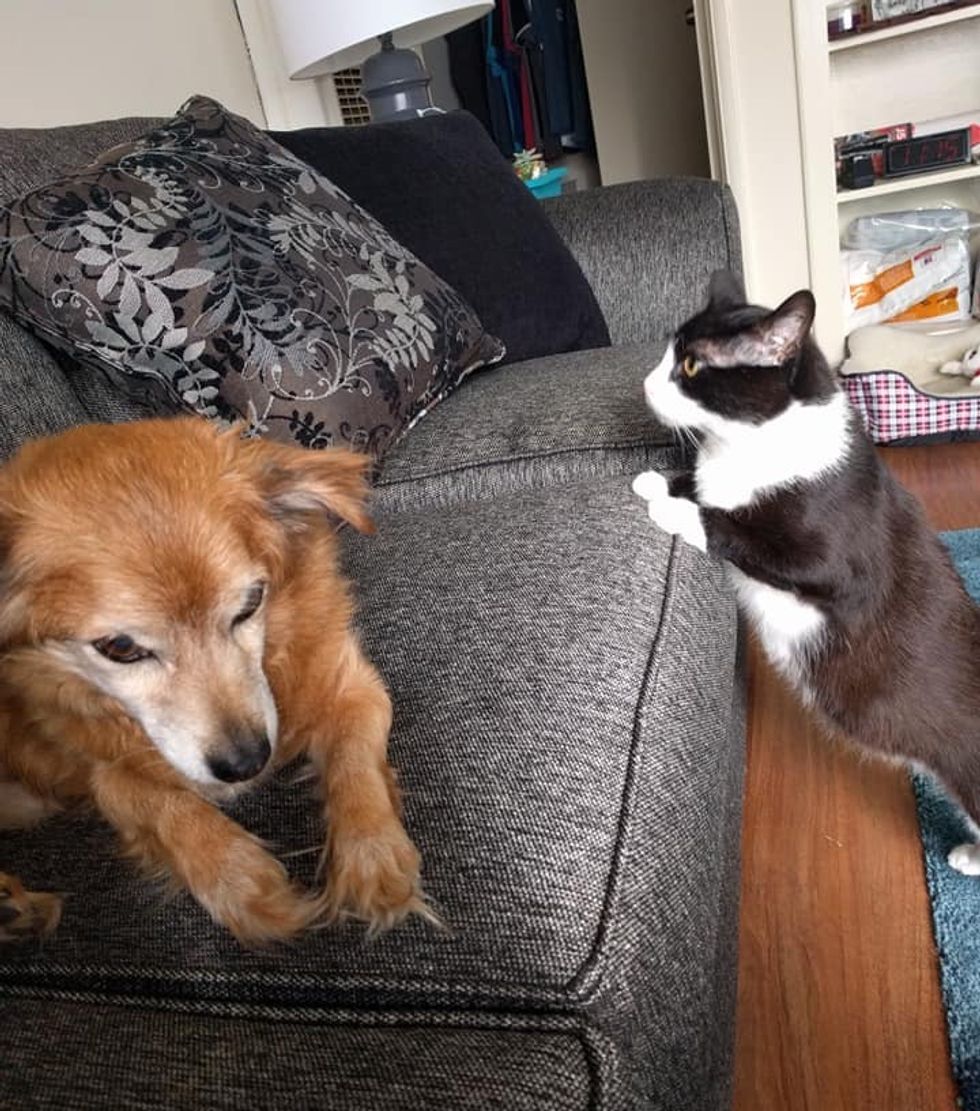 To everyone's surprise, he walked up to the canine, laid himself right next to him on the couch, and insisted on being his friend.

"Tanner was apprehensive at first, but Shortie persisted," Mamie told Love Meow. "I reassured him and they both fell asleep." 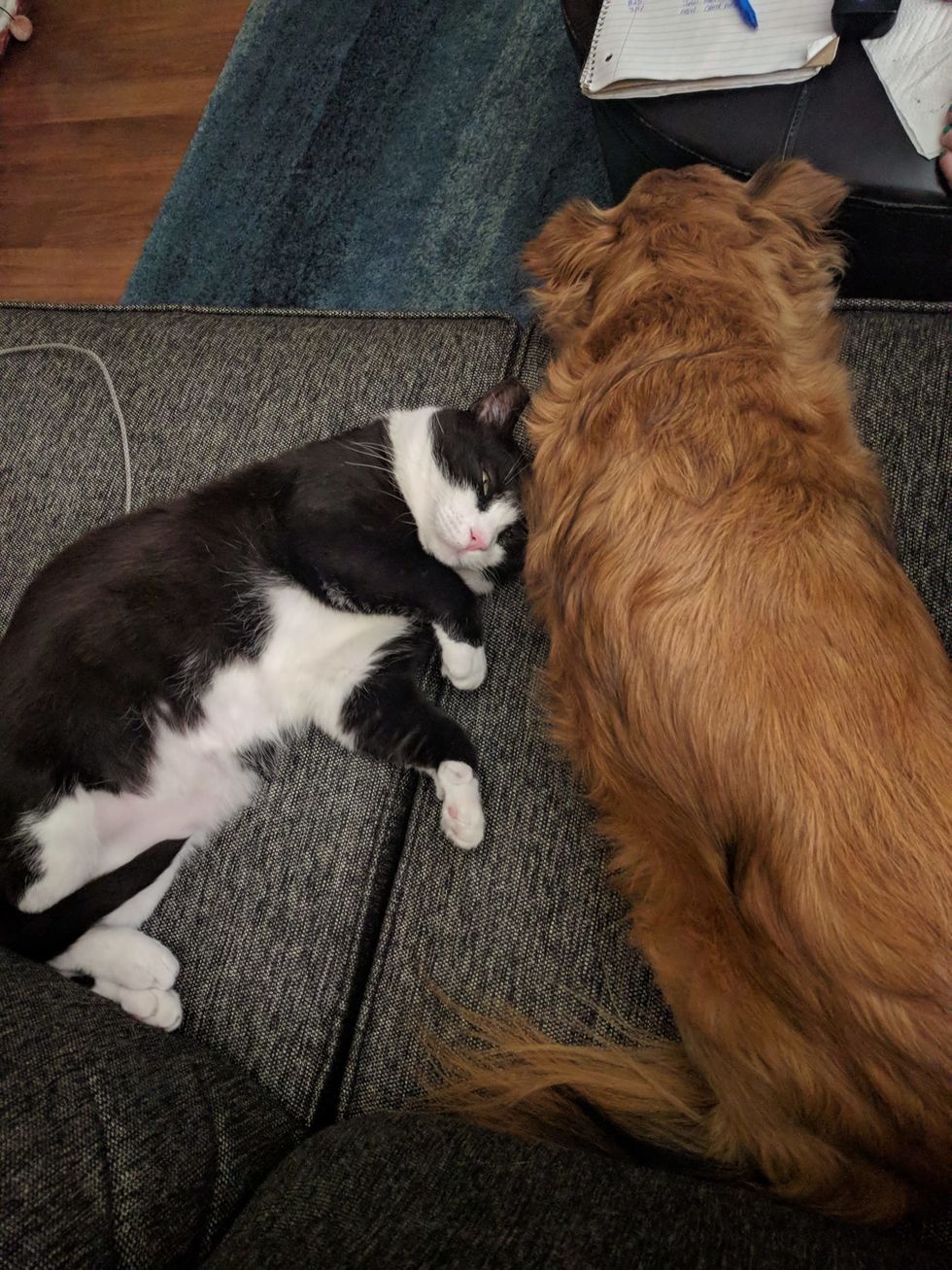 Tanner's calming presence really made the tuxedo feel at ease. After that, Shortie began cuddling with Tanner every day without fail.

"Shortie always wants to lay next to Tanner. Every time Tanner goes for a walk and we come back in the door, Shortie greets us and rubs up against Tanner," Mamie said. 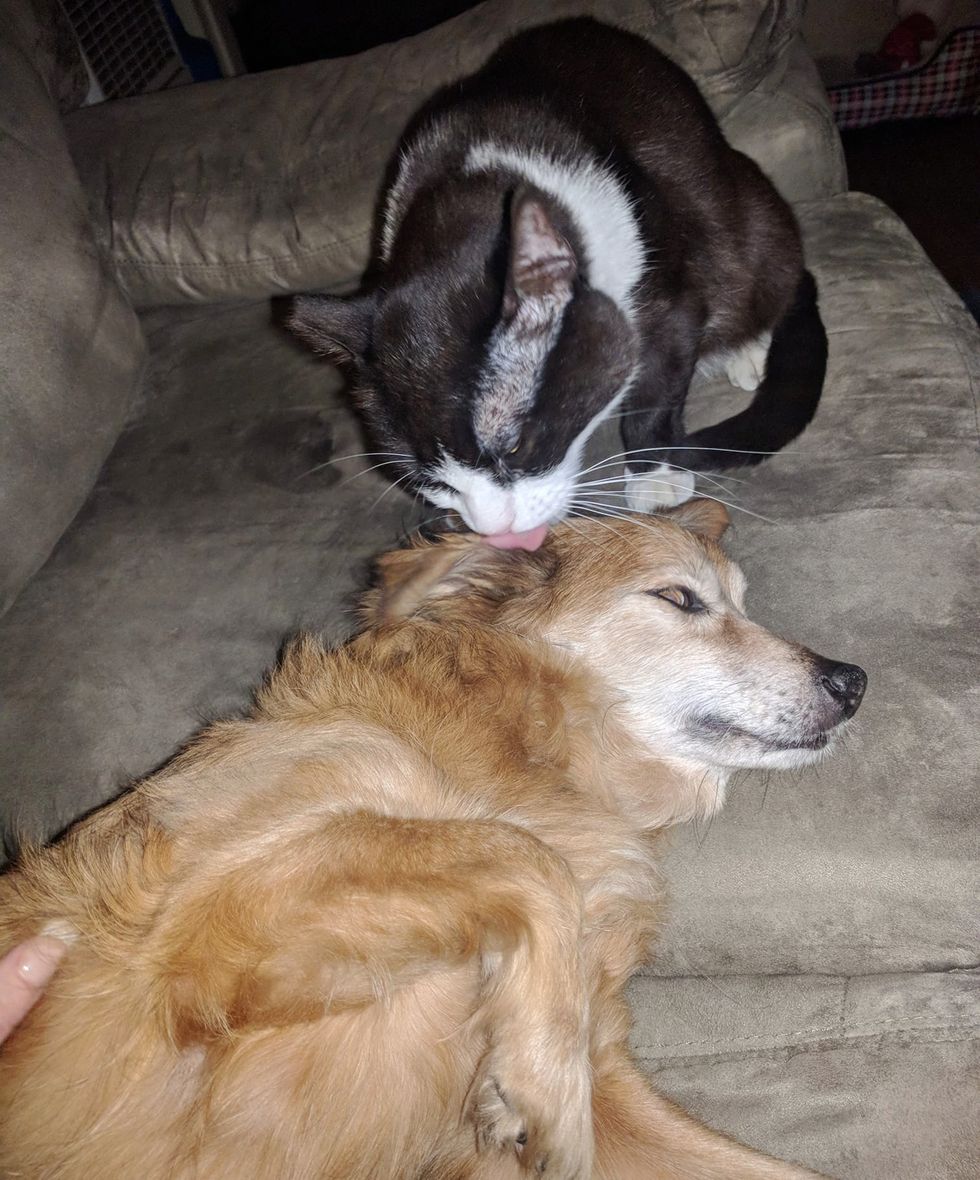 With help from their canine, Shortie has grown confident around people and started to enjoy cuddles from Mamie and her boyfriend Deja.

"Currently, it's not enough for Shortie to just lay next to Tanner, Shortie has to be touching him." 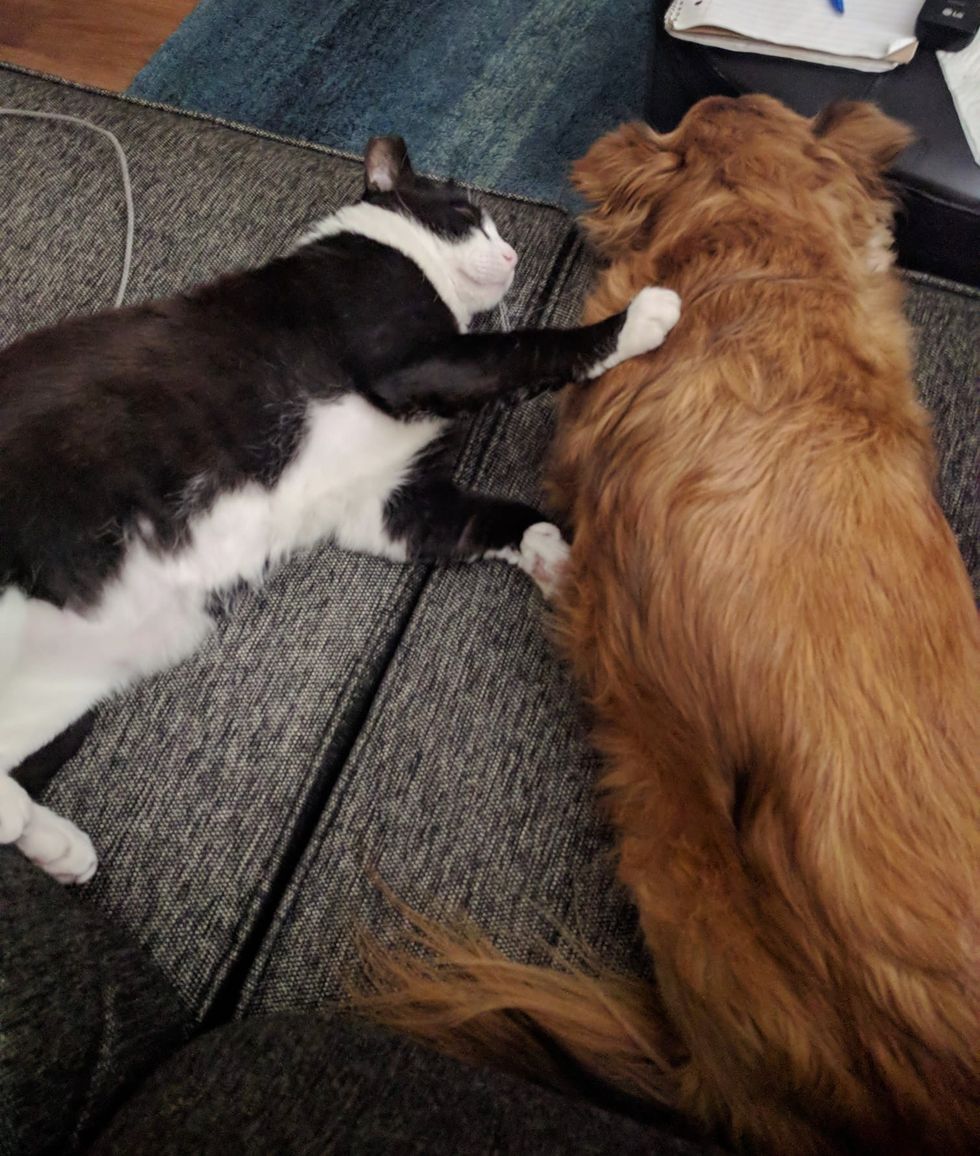 When it came time to find him a forever home, the couple knew the cat had found it already.

"He just wiggled his way into both our hearts," Mamie said. 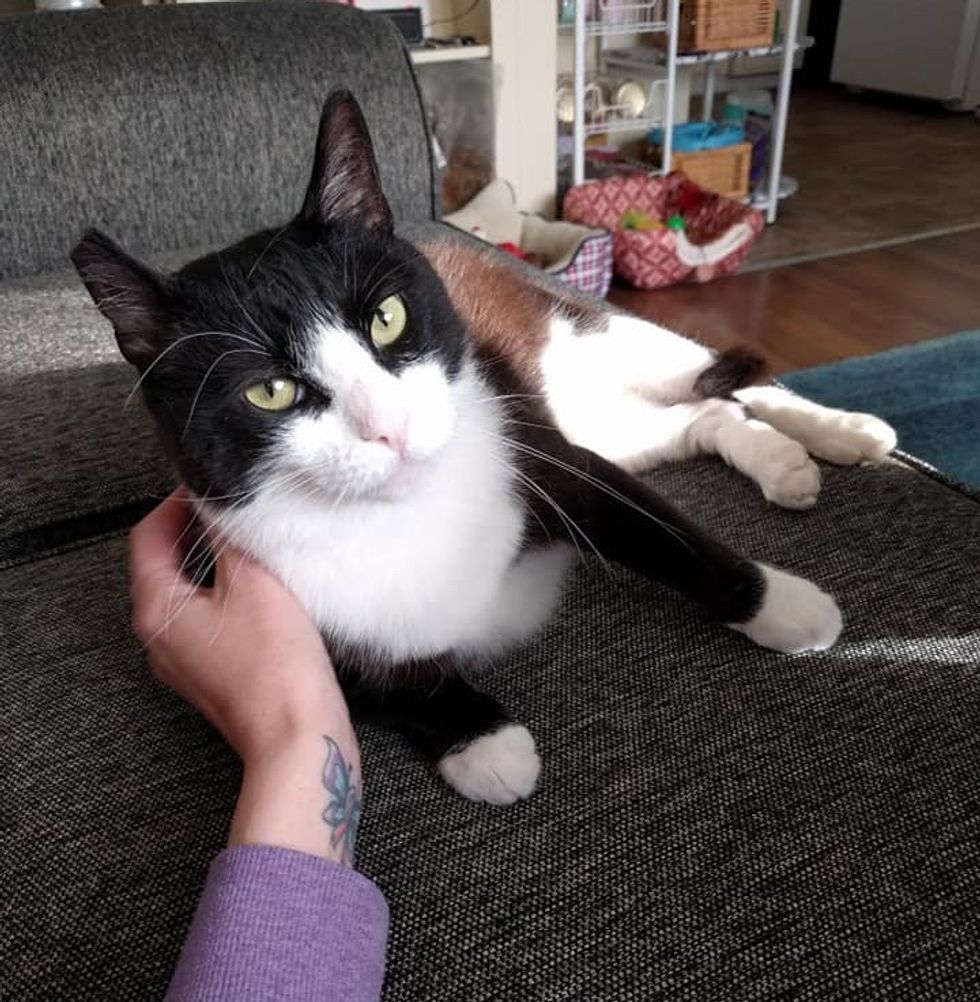 "Shortie has started trying to get Tanner to play with him by tapping on his front paws or running back and forth tagging Tanner."

The tuxedo cat has made the senior dog feel like a puppy again. The two best friends are never far from one another. 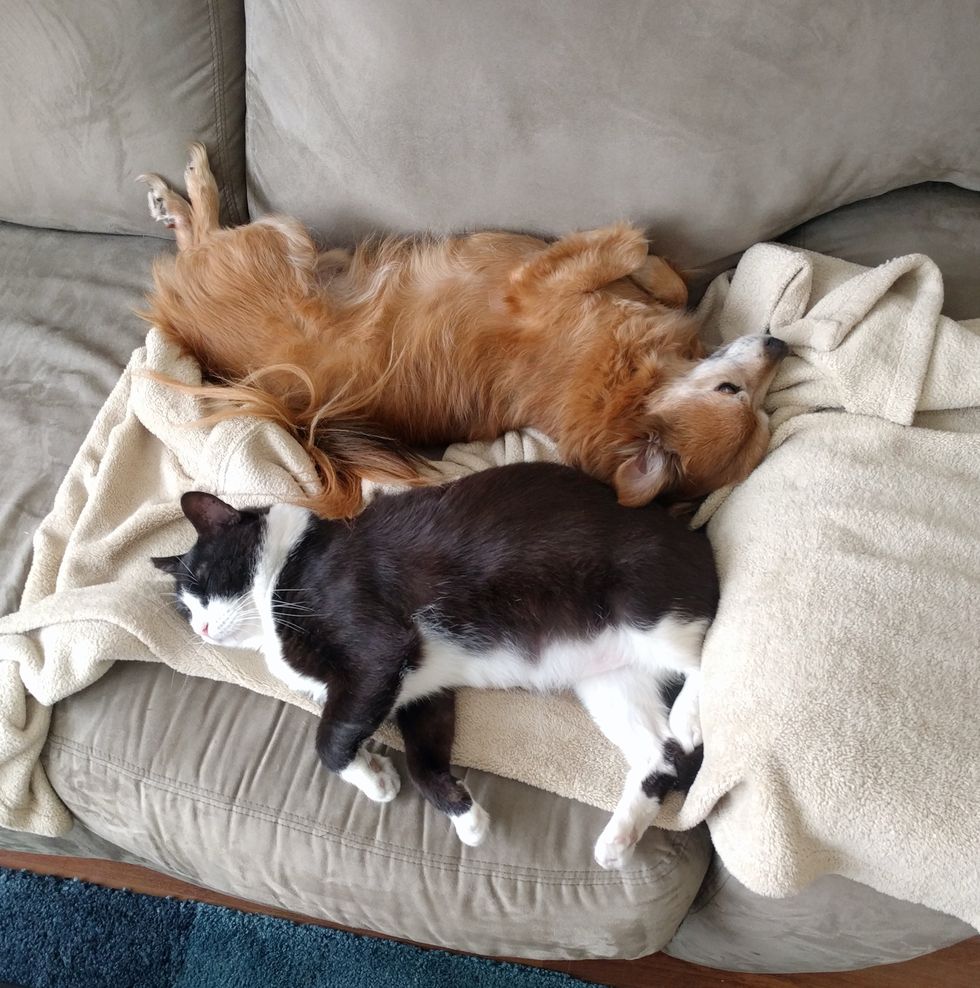 "I've noticed they look for each other. The other day when it was raining so hard Tanner was sleeping in the closet, and Shortie searched the whole apartment for him."

Shortie joined his buddy and demanded that he never leaves him. 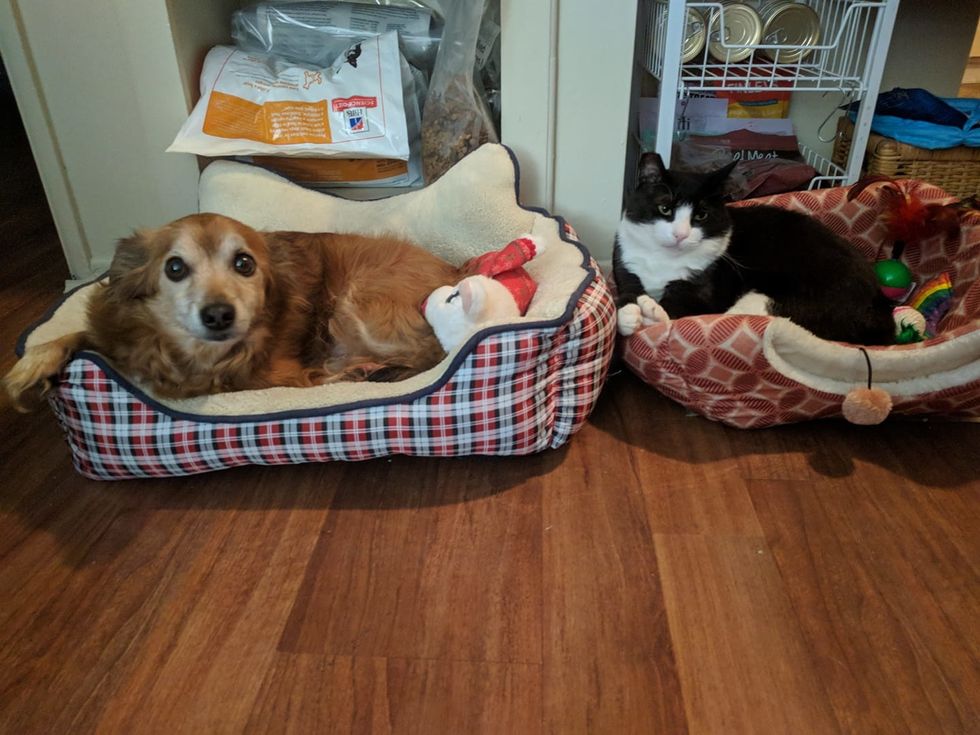 The couple didn't have a plan to adopt another pet, but when Shortie found Tanner, he knew this was his home. 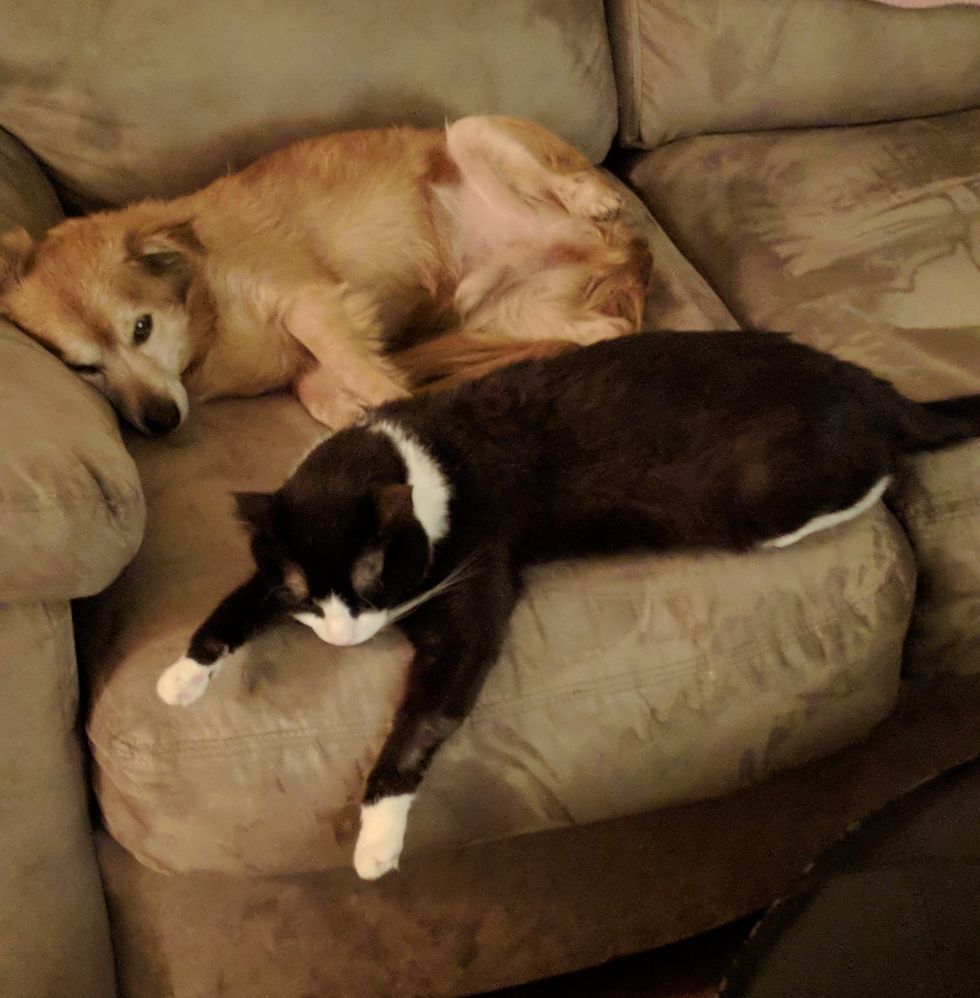