Cat Who Was Sad at Shelter, Finds Joy Again When Man Shows Him Love

An one-year-old cat named Marmalade came to a local shelter in Indiana along with his siblings. He was scared of the unfamiliar place and stopped eating as if he was giving up.

Shelter staff knew that he needed a home environment where he could feel loved and safe. 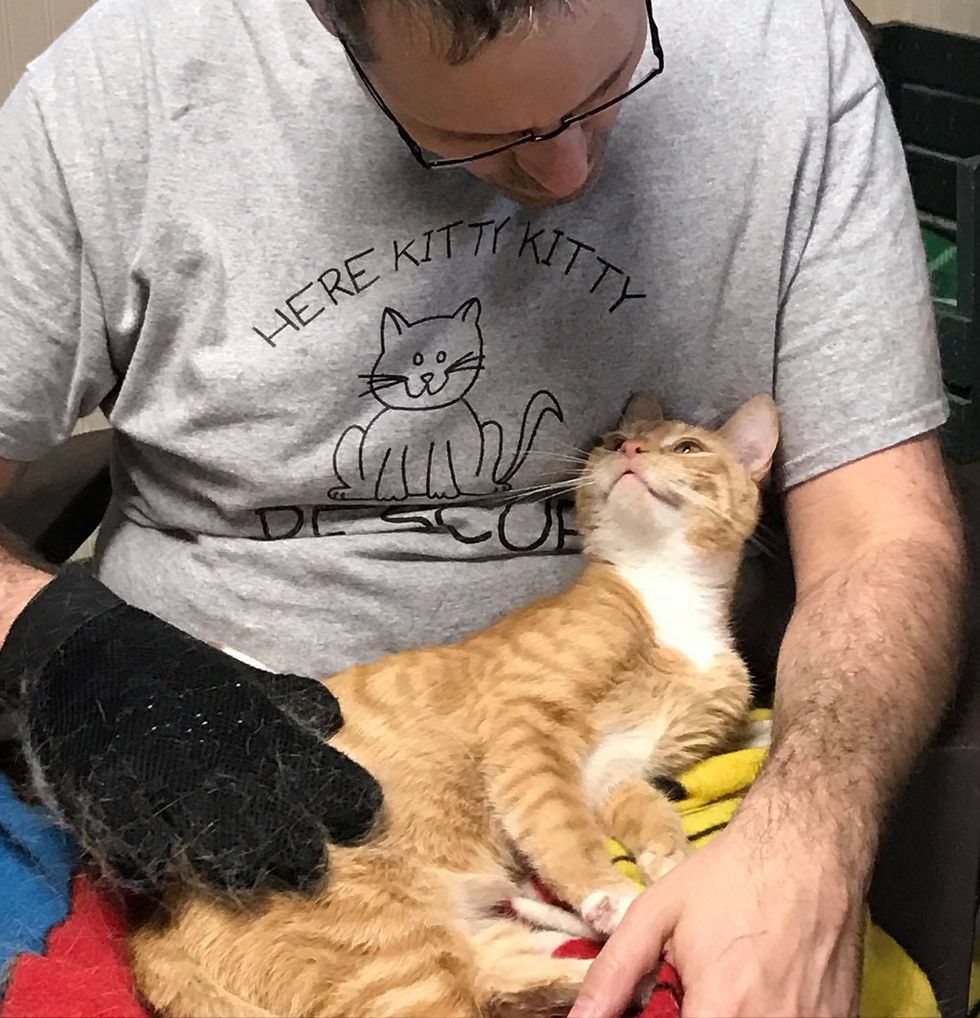 They reached out to Here Kitty Kitty Rescue (HKKR, in Elkhart, Indiana) and asked if they could take him in. "Marmalade was surrendered along with his siblings when their family could no longer care for their 12 cats," Missy McNeal of HKKR told Love Meow. "He was not thriving in the shelter environment. He was shutdown, lethargic and losing weight rapidly despite all their best efforts."

HKKR has a large barn that they transformed into a beautiful sanctuary for their rescue cats. Kitties can roam freely inside the spacious place, where they are provided with plenty of comfort, lots of entertainment and good food. Volunteers come to spend time with them every day and supply all the cuddles, play time and attention they need to thrive.

When Marmalade first arrived, he was a bit shy and reserved. He came out of his carrier, sniffed around the room and found himself a comfortable spot in a cat tree. 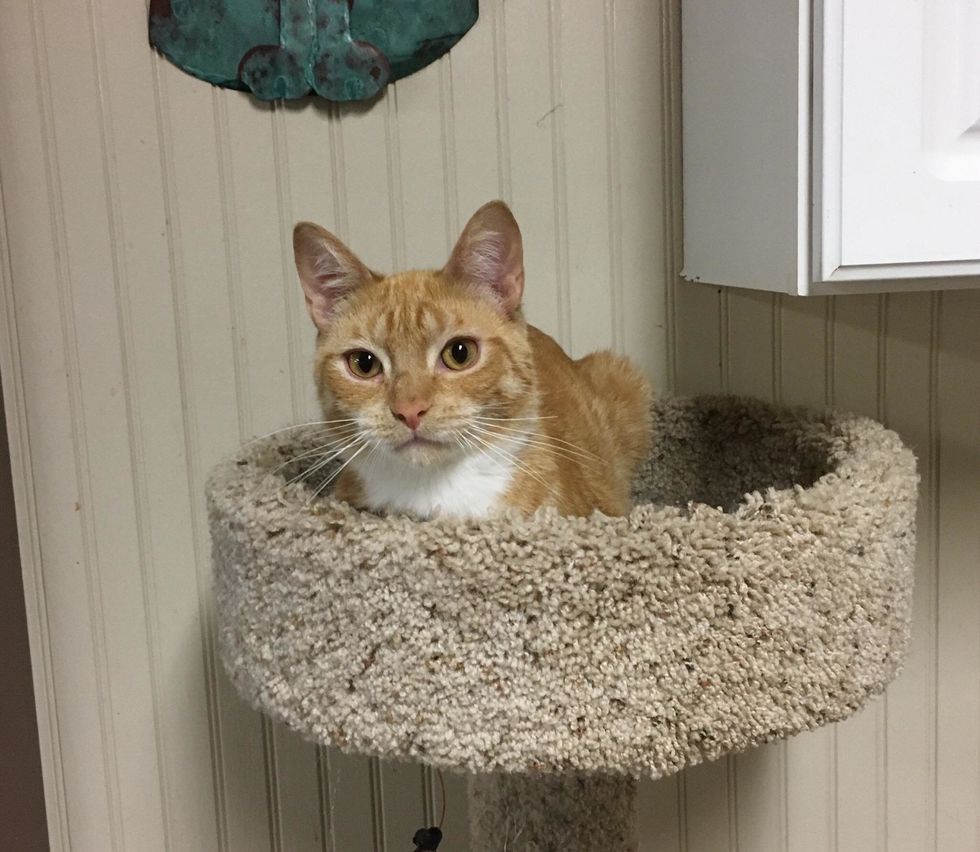 "He was nervous at first, climbed on top of a cat tree and took in all the new scenery," Missy told Love Meow. "The more love and attention he received, the more he came out of his shell and started to realize that he was going to be OK."

Rick, one of the volunteers at the rescue, comes every weekend to brush and socialize the cats. He is known to be the cat whisperer who is able to make all the cats feel at ease and to give them the extra attention they need. 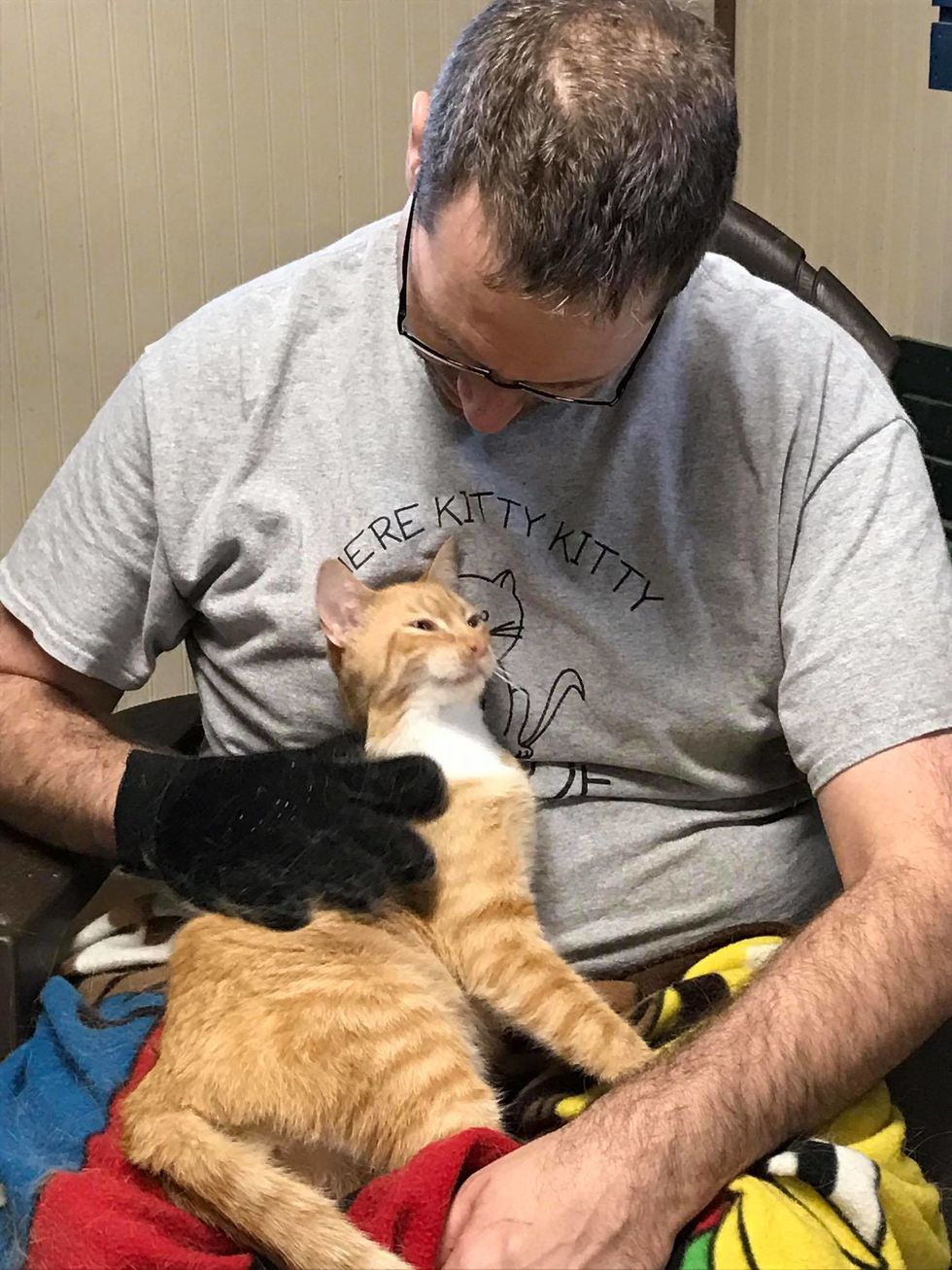 Rick saw this shy kitty all by himself in the cat tree and knew just what he needed. He gently put him in his lap and started brushing him with one hand and holding him with another.

Marmalade couldn't resist the love and turned his purr-motor on full blast. 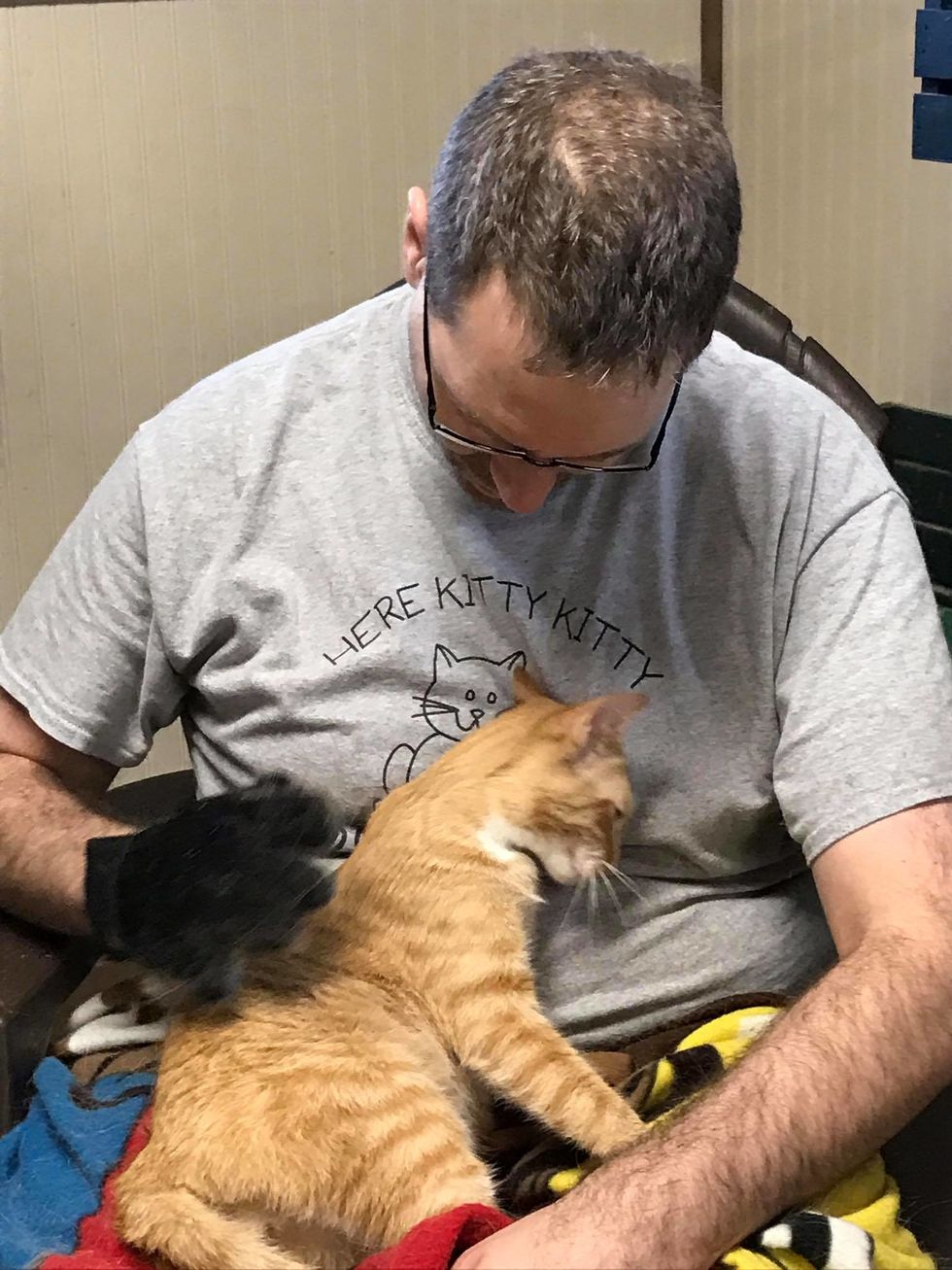 "Marmalade found Rick his first week at the rescue and soaked up every bit of attention and love," Missy said.

He stared into Rick's eyes while he was getting petted. "You can tell how happy he is to feel love!" 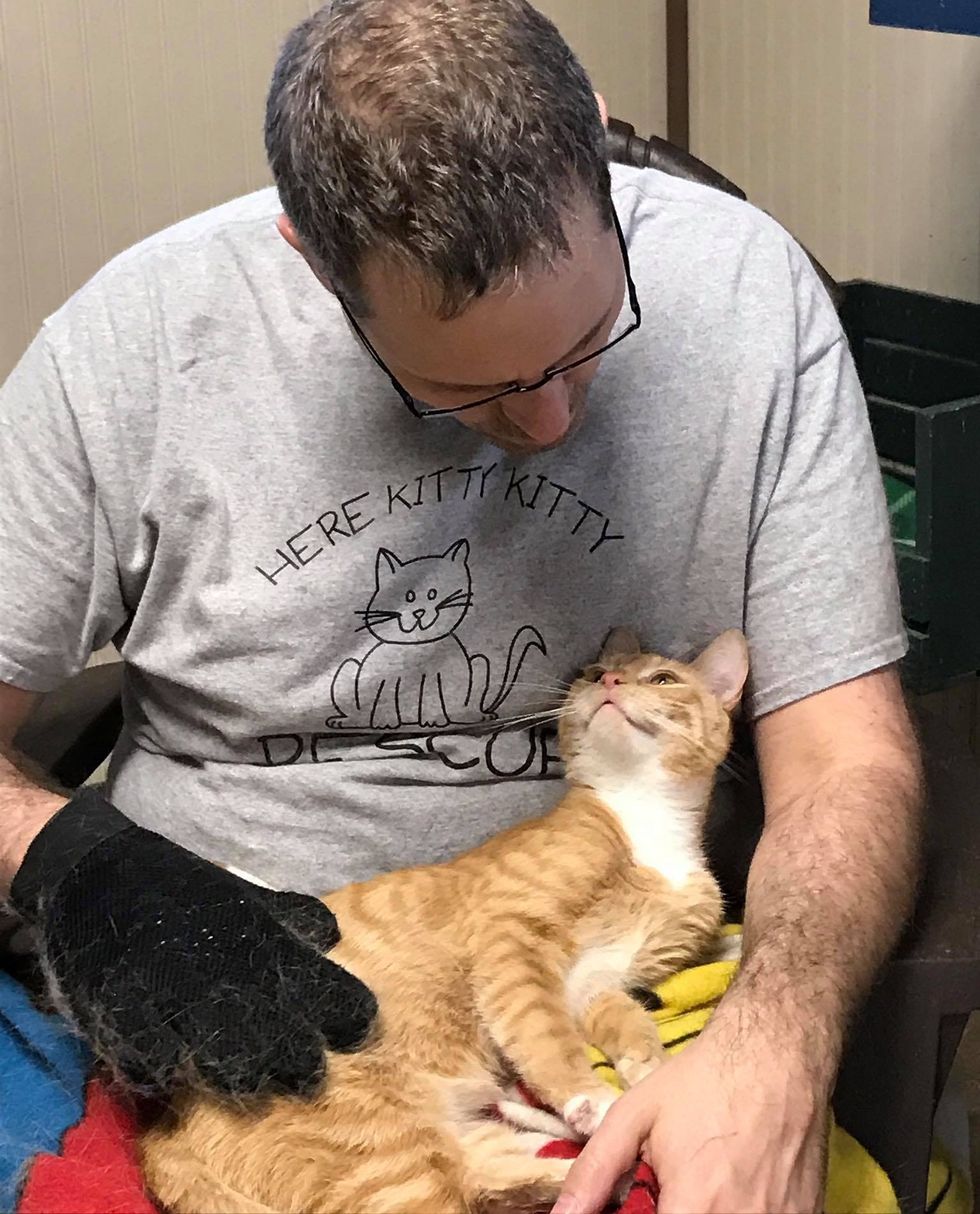 These cuddle sessions have made a huge difference in shy cats like Marmalade. Not only has he regained his confidence, but he's eating normal again.

"He has begun to gain weight, play and is certainly loving his life at Here Kitty Kitty Rescue!" 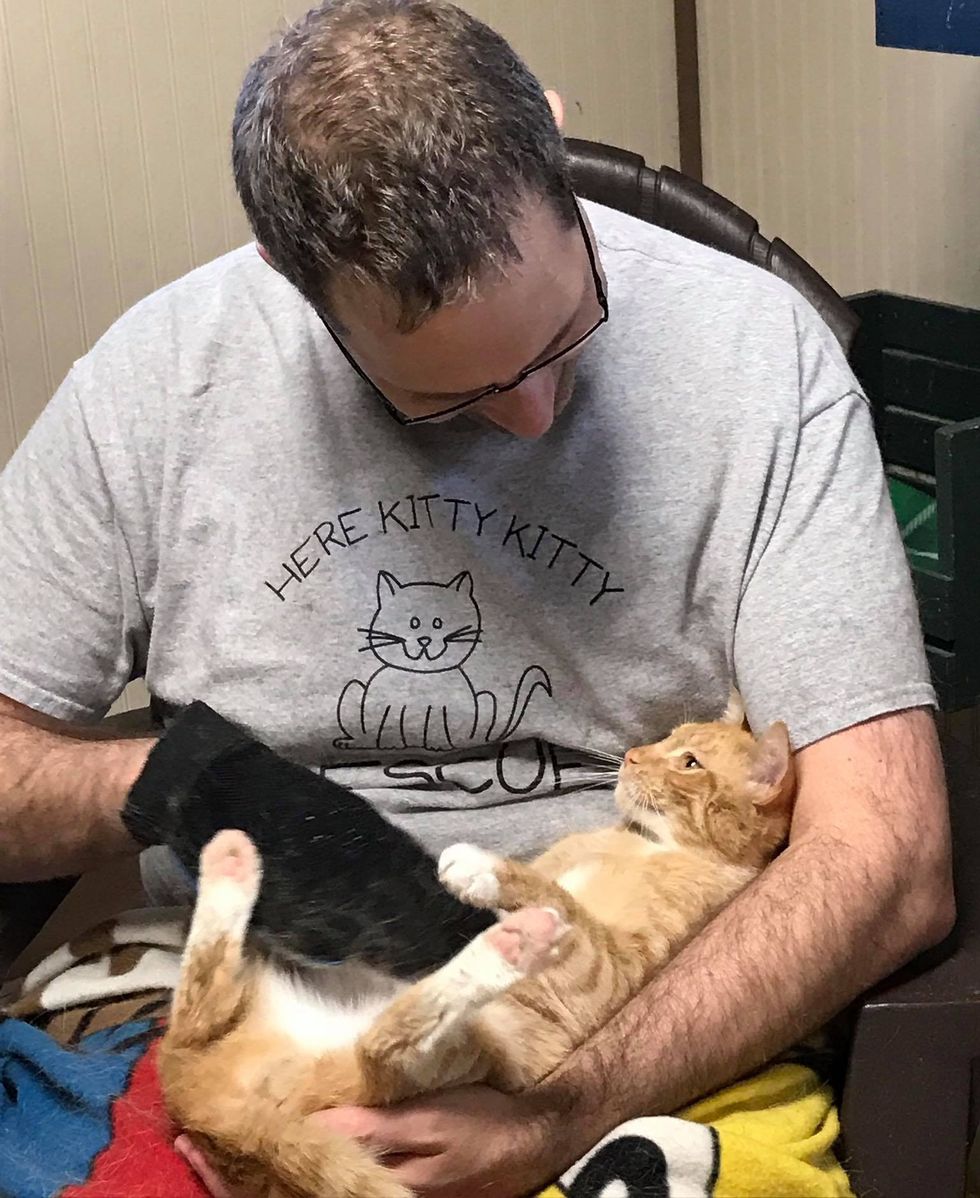 "Imagine yourself in an unfamiliar place with a ton of people. You used to have a home, you were loved and felt comfortable with your life. That must be how a cat feels when first brought into a shelter or rescue," Missy said.

"When a volunteer comes to socialize with the kitties, imagine the joy you bring to their hearts. The feeling of love and self worth returns. Marmalade's emotions are worth a thousand words." 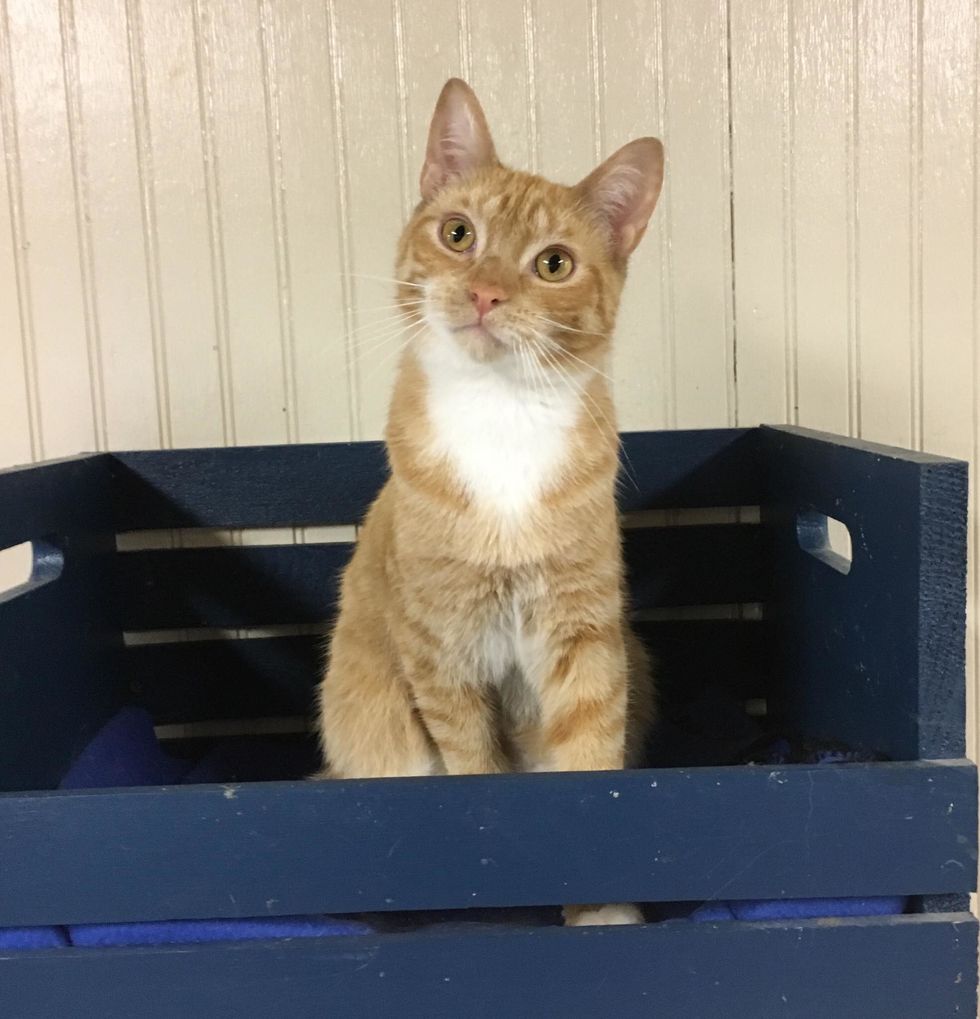 The sweet ginger boy is back to being himself again - happy, friendly and playful.

"He never stops purring and just wants a family to adopt him so he has a lap to sit on all day!" 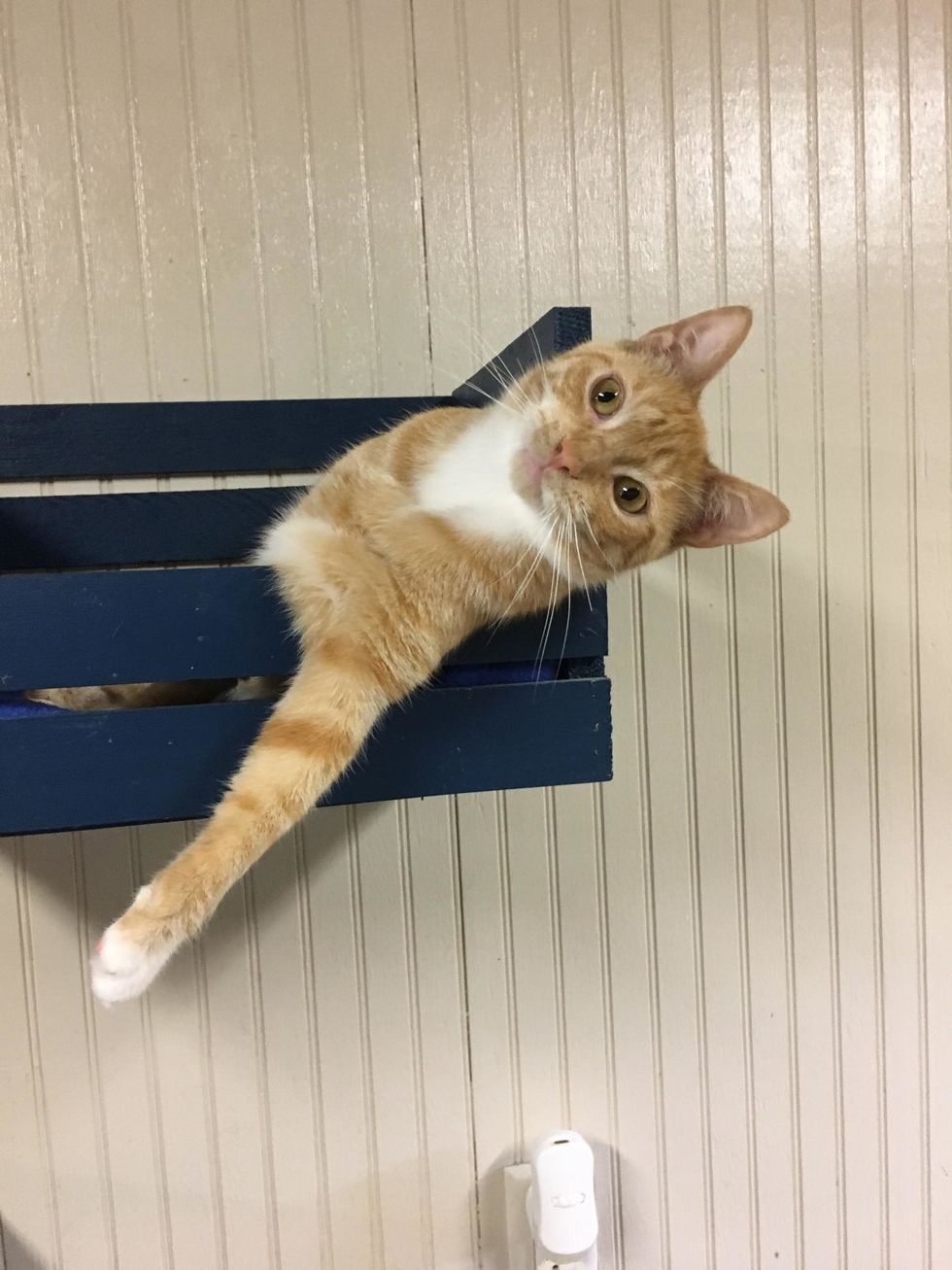