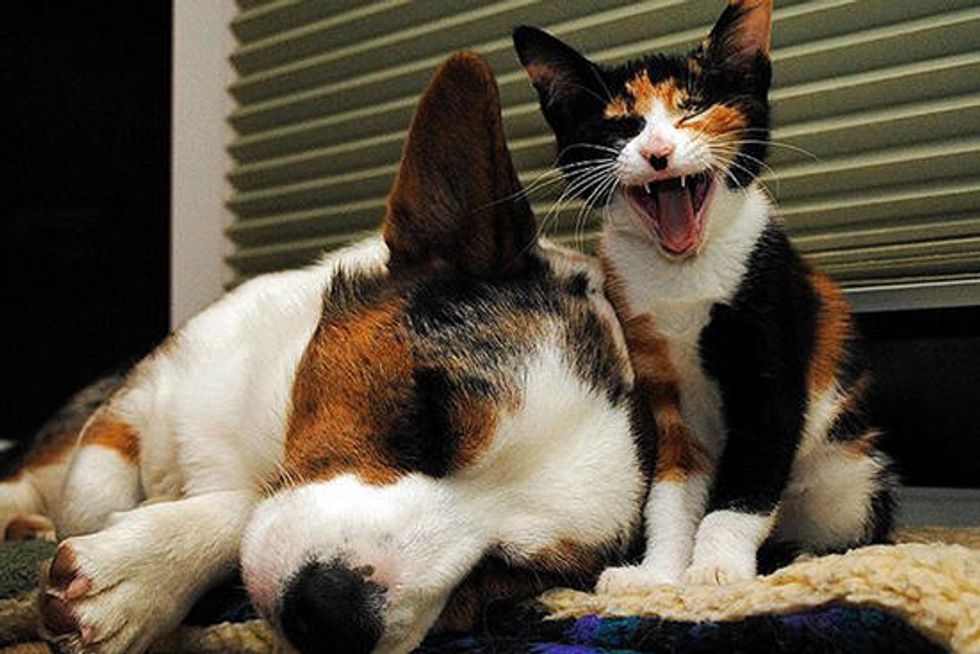 Friendship Between Sophie the Kitten and Simon the Pup

Sophie the kitty & Simon the dog

Little kitty is a rescue. my neighbors found her eating garbage out of their truck last Friday, and well, they're not pet people.

They thought of us at 10 pm at night and brought her over to my house, starving, full of fleas, and VERY mouthy and yelling about how put out she was about this situation! At least we have plenty of cat food here, and she was much happier once her tummy was full and she had a warm place to sleep for the night.

So, no one around here is missing a kitten, no one claimed her. We called all the rescues -- nothing. Our area isn't an area where little kittens randomly appear either -- in our 13 years here, we've seen one stray cat. (Who is no longer a stray cat, haha! ;)

Simon is my two year old Cardigan Welsh Corgi. He's a wonderful dog! :) At first, he was shocked that cats came in this size -- all of my cats were adults when he was a puppy... and he was a bit frightened of her! She, on the other hand, has no fear of dogs, and proceeded to make friends very quickly with him.

Once he realized she was a CAT (just in concentrate form) he was so, so excited. She romped right over to him and his eyes were all huge and excited and he was wagging and licking (see, our cats only tolerate that in small doses.) So, since she couldn't have any kitty buddies until she went to the vet and got cleared, we'd let Simon in to play with her and keep her company (supervised, of course!)

Monday, right into the vet; checked for all the bad things, cleared, wormed, microchipped, double checked that no one had lost a kitty --- nope, no kitty lost. :( (I didn't think so, she'd been obviously on her own for a bit, poor kitty.)

Simon is giving Sophie a bath :)

So, now she has a name and a home for life because we're cat folks-- Sophie! And Simon loves his Sophie -- we're allowed to pick up Sophie, but our friends aren't, he stands there and barks until they put Sophie down, haha. He follows Sophie around the house and if the other animals get too rough, he gets between them and pushes them away. Sophie chews his face, his ears, his tail, his paws and he just has this big goofy grin. If you tell him, "Where's Sophie?" he runs and finds her. (Which is good, haha, because there's a lot of places for kittens to hide in our house at times!)

We keep joking that they match; merle and calico! ;)

Really, she's a nice cat. I really can't figure out why someone would abandon this kitten -- she's very well behaved -- if busy! Like, follow you all over busy! Even my cats all love her -- my bottle fed boy that I rescued five years ago thinks she just showed up to wrestle with him. All my other cats are breathing a sigh of relief.

Simon and Sophie
Gorgeous!
"I can see better when I am taller"
Snuggles!
Nap time
"I will take care of you."
storykittensrescue storycat and dogcatsrescued catdog and cat friendshipnews article
Subscribe to Love Meow Newsletter for more cat stories
Popular Stories
popular