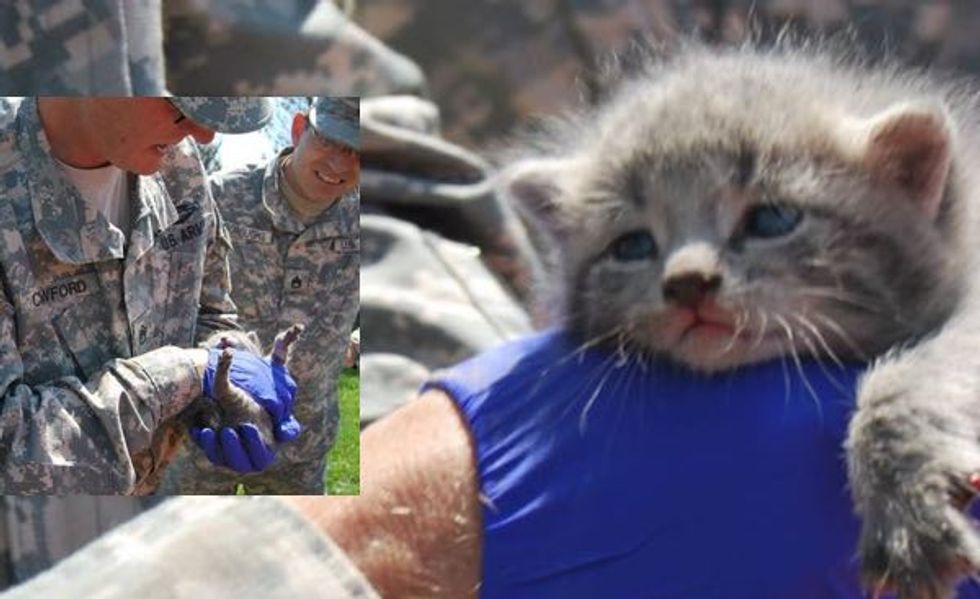 There was a heroic rescue of a little kitten named "Cobra" who let his curiosity get the best of him. He was found stuck in an inactive helicopter at U.S. Army Fort Drum & 10th Mountain Division.

"I'm a film instructor with I Was There Film Workshops, a nonprofit organization that teaches free, therapeutic filmmaking workshops to military veterans coping with PTSD. Last week (June 11th) we had a workshop at Fort Drum in NY. I was not on this workshop, and that's unfortunate as we had the CUTEST CRISIS EVER," Nicole S. told Cuteoverload.

"A team of students and instructors noticed a TINY GRAY KITTEN who had climbed inside and gotten stuck in the side of an inactive Cobra helicopter on base. The helicopter was in a museum of preserved (but not in use) vehicles on base," said Nicole.

"After feeding the poor thing some milk via drinking straw, they were able to finally free the kitten by opening an access panel on the side," she added.

"We are going to get you out kitty! Hang in there!"

"There you are little one!"

Comforting their little furry friend after the rescue.

"A passing couple- a soldier and his wife- who had become invested in the rescue took little Cobra (who seems fine, if sleepy) to a local vet to get checked out!"

Yay for the good folks who rescued little Cobra!