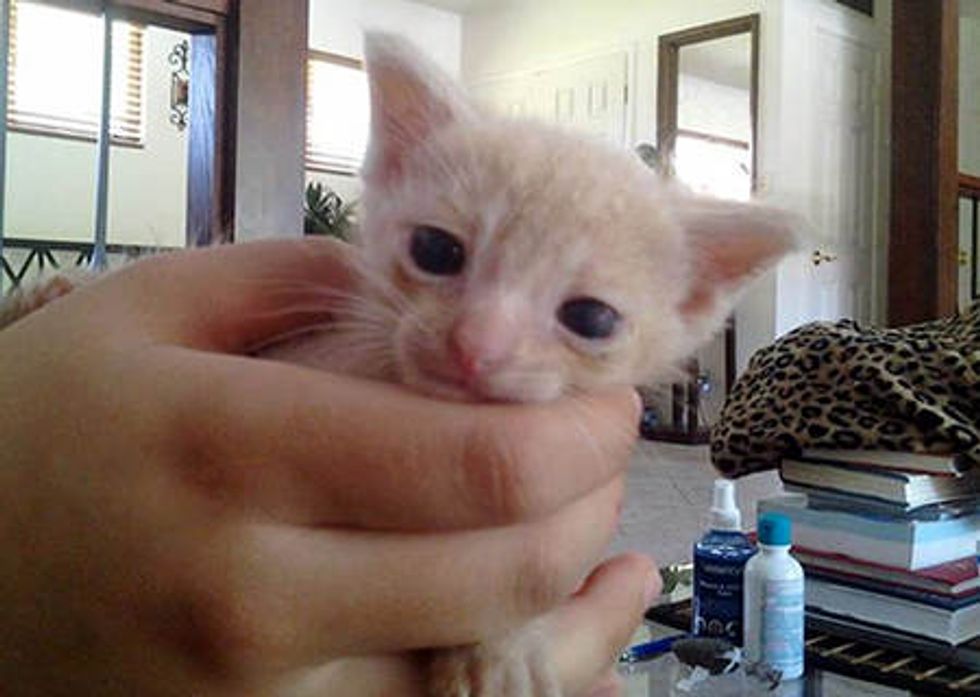 Jack the kitty was born in a cactus patch and survived a difficult time living around cacti. When he was rescued, he was very skinny and weak, but a kind person who found him and the overnight vet stay helped the little ginger boy turn around.

He was 3 weeks old at the time with a severe eye infection that kept his eyes closed shut and was covered in cactus needles. The vet removed what they could, but it wasn't enough. Jack's human spent hours every morning picking out the needles for him one by one. "He sat patiently for it all, and even started purring." (Read full story of Jack's beginning)

Little Jack has repeatedly defied the odds and is flourishing. Despite how weak and malnourished he was, Jack fought his way through the journey. Not only did he regain strength, but he got most of his vision back.

It's been a year since Jack was saved. It's hard to imagine what the first 3 weeks of his life was like living in a cactus patch. The brave kitty is now very loved and happy for the new life he's been given.

He adores the person who pulled him out of the cactus patch and nursed him back to health. "He cries if I leave the room for more than a few minutes, and he sleeps curled up with me."

Jack the kitty was born in a cactus patch and lived there for 3 weeks. He was weak, malnourished, and covered in needles when he was found. The vet didn't believe that he could survive but little guy was a fighter.

Jack repeatedly defied the odds and is flourishing.

Not only did he regain strength, but he got most of his vision back.

This is Jack when he was a tiny kitten.

Jack now all grown up. He loves his home and the person who saved him and nursed him back to health.