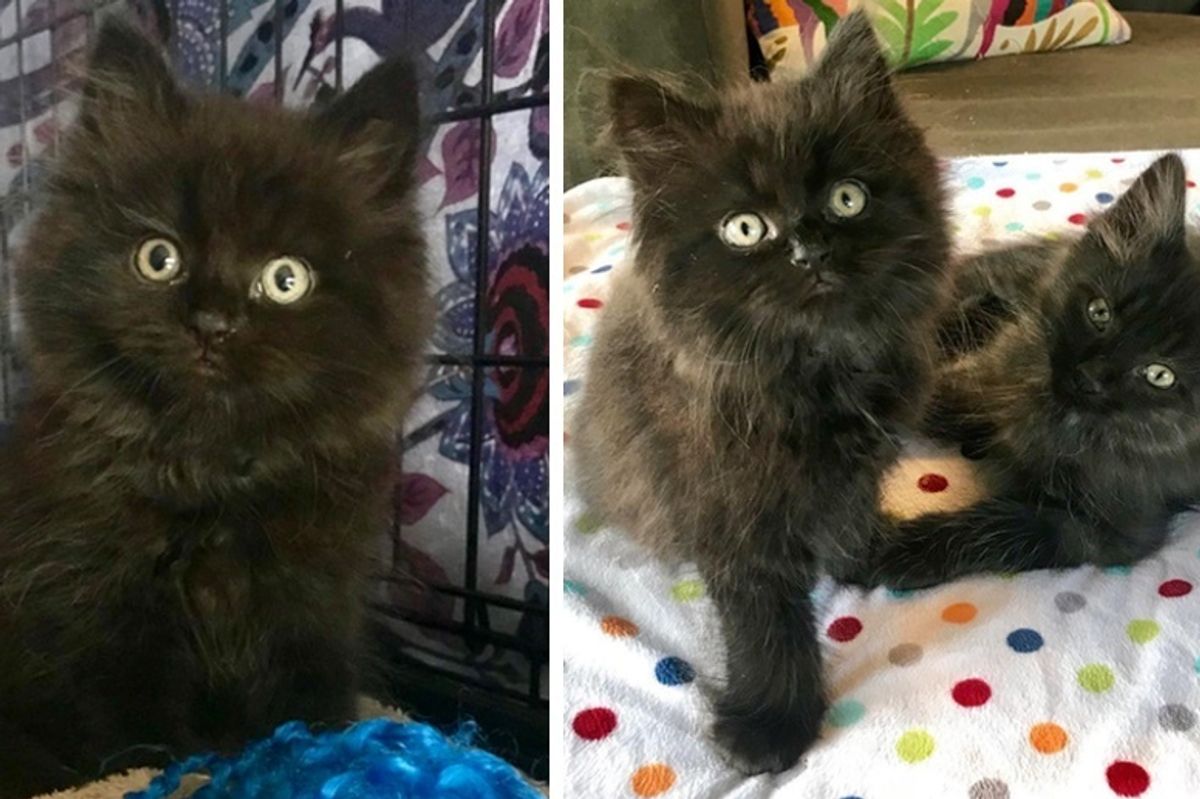 A little stray came to the New York City shelter needing a foster home after he was found wandering the streets without a mom.

The kitten named Silva was in poor health with an upper respiratory infection and conjunctivitis. Shelter staff reached out to volunteers, hoping to get him into a foster home so he could start recuperating.

"I received an email from the shelter looking for a foster where he could recoup and gain weight," Alyssa Leal, a volunteer of the shelter, told Love Meow.

Though her house was full with two other rescued kittens, Alyssa couldn't say no to the little one in need. She pulled out her crate, headed to the shelter and brought the kitten home.

Over the next two weeks, Silva bounced back from his illness and was looking much better, but the kitten craved companionship, constantly looking for attention from his foster mom or other kittens.

"Silva was separated from the stray kitten that he was found with because of his poor health, and after my other fosters (Jules and Vincent) were adopted, I wasn't sure how Silva would do by himself again since he absolutely loves kitty company," Alyssa said.

He started clinging to Alyssa more and more. "It was a sign that he needed a friend."

Around that time, Alyssa received another email about a 7-week-old kitten who was very timid and needed love. The little bundle of fluff looks like Silva's brother from another mother.

"Professor Lupin (the kitten) arrived a scared boy huddling in a corner, but after two days of purritos, treats and affection, he was out and about a bit more."

Lupin hasn't mastered the art of self-grooming so he needs a little extra help cleaning.

"I set him up in a crate in our living room where he watched Silva play and run around. When they finally met, Silva totally welcomed him in," Alyssa told Love Meow. "He taught him how to play, run, clean himself all from observing Silva."

The two kitties really bonded. Lupin was very shy when he first arrived, but Silva helped him gain confidence each day, taking on the role of a big brother.

"Silva is doing an excellent job of teaching Professor Lupin how to be a kitten!"

Despite all the fluff, little Lupin hasn't reached two pounds. He likes to follow Silva around the house and do everything he does.

"Now they sleep and play together all day long, as well as with our resident cats," Alyssa told Love Meow.

Silva is the happiest kitty he's ever been with his best friend by his side 24/7.

Their lives as a stray are over, and now they are cuddling each day in the comfort of a loving home.