Woman Saves Blind Cat From Shelter and Comes Back to Find His Brother.

Two brother kittens were taken into a local shelter in Virginia at just a few weeks old. They were both born with congenital eye abnormalities. Jen, an avid fosterer/rescuer, saved the little ginger and came back to the shelter to find his brother. 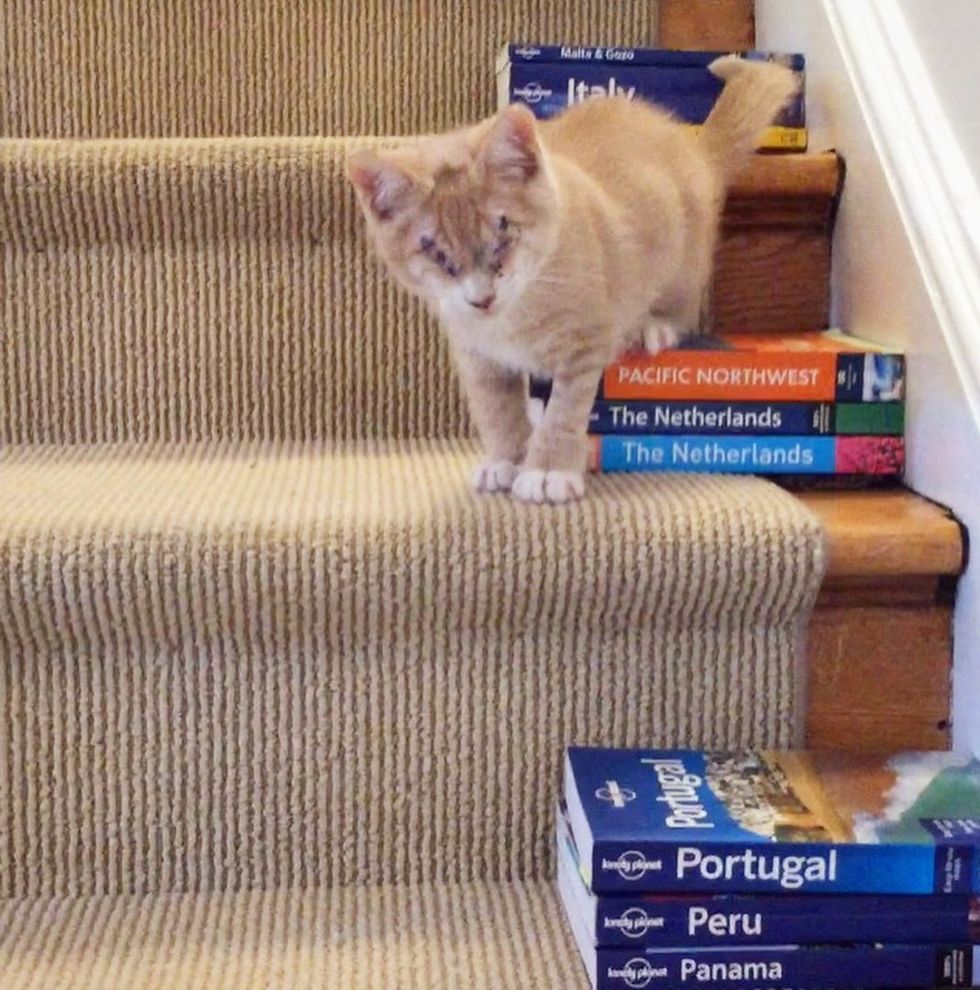 Jen found Bop just a few days after his eyes had been removed due to a condition called microphthalmia, where the eyes are very small and do not form correctly. "Bop's eyes could not be saved. It is likely that he has never been able to see," Jen told Love Meow.

The surgery was difficult on the little guy but he survived against all odds. Jen pulled him from the shelter that day, and transferred him to Lost Dog and Cat Rescue Foundation in Fairfax, Virginia.

"I knew he had a brother (Boop), but they were not in a cage together. Boop was being made immediately available for adoption, while Bop still needed to recover from his eye surgery and post-op ordeal. Over the next week, I couldn't get Boop out of my mind."

She went back to the shelter to look for the other brother. "I asked them if I could pull him, too. They said, 'Yes!'" 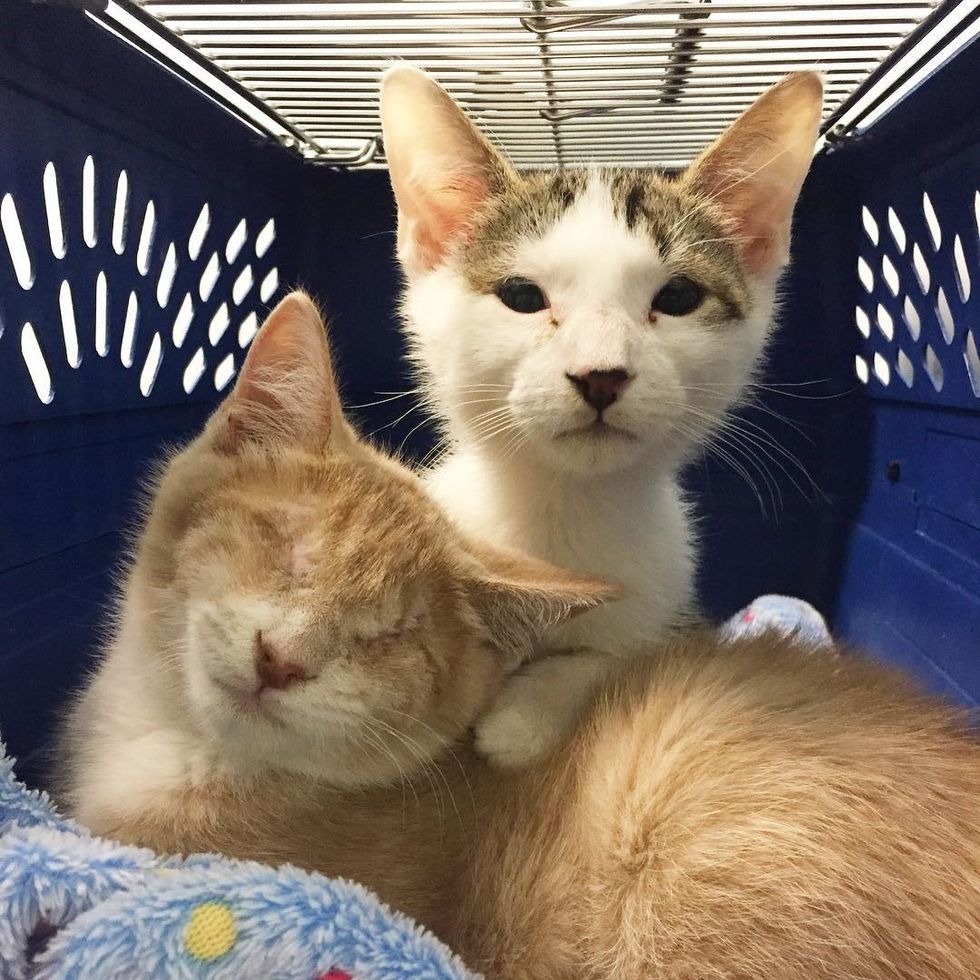 "I reunited the brothers and they have been inseparable ever since," Jen told Love Meow.

Boop, too, was born with a congenital eye abnormality. "He has a condition called eyelid agenesis, where part of the eyelids do not form, leading to discomfort and chronic eye infections." 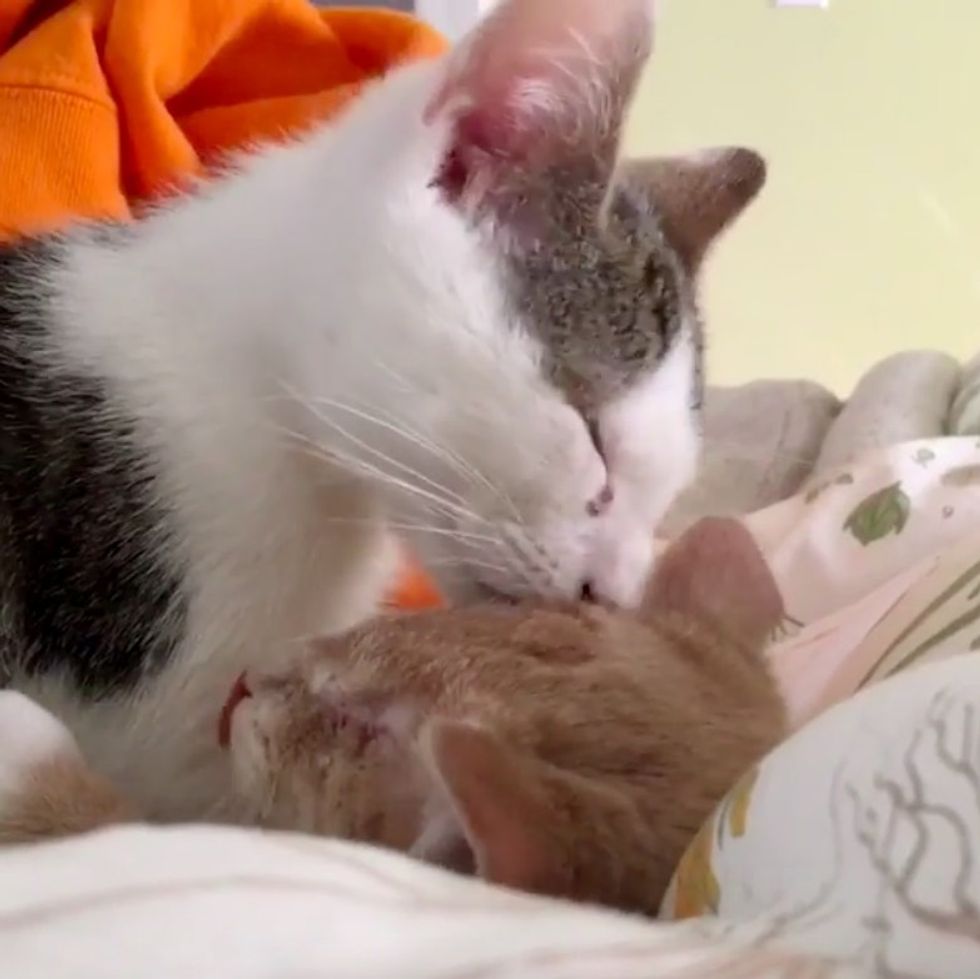 Boop needed a series of surgeries to repair his eyes. "These surgeries are expensive and delicate, and if not adopted by a person who could afford these surgeries, he would have had a life of discomfort and possibly chronic infections."

Lost Dog and Cat Rescue Foundation was able to raise funds for Boop to have his surgery done by a local ophthalmologist. 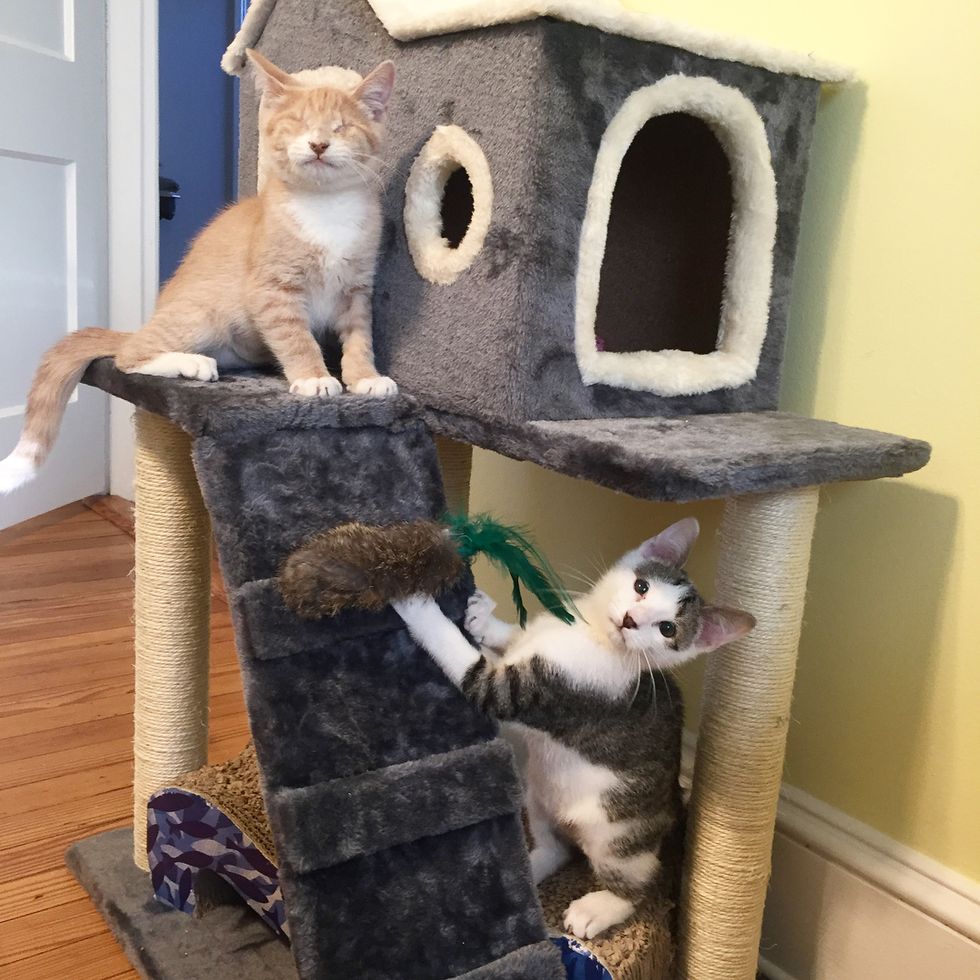 Bop the ginger can't see, but he's able to navigate and do just about everything a cat with sight can do. (Scroll down for video)

"Early on, we had to teach him how to use the stairs and get up on certain furniture, but now he zips up and down the stairs, climbs the cat tree, races around the house, and can find his favorite toys even when they get lost under furniture," Jen told Love Meow. 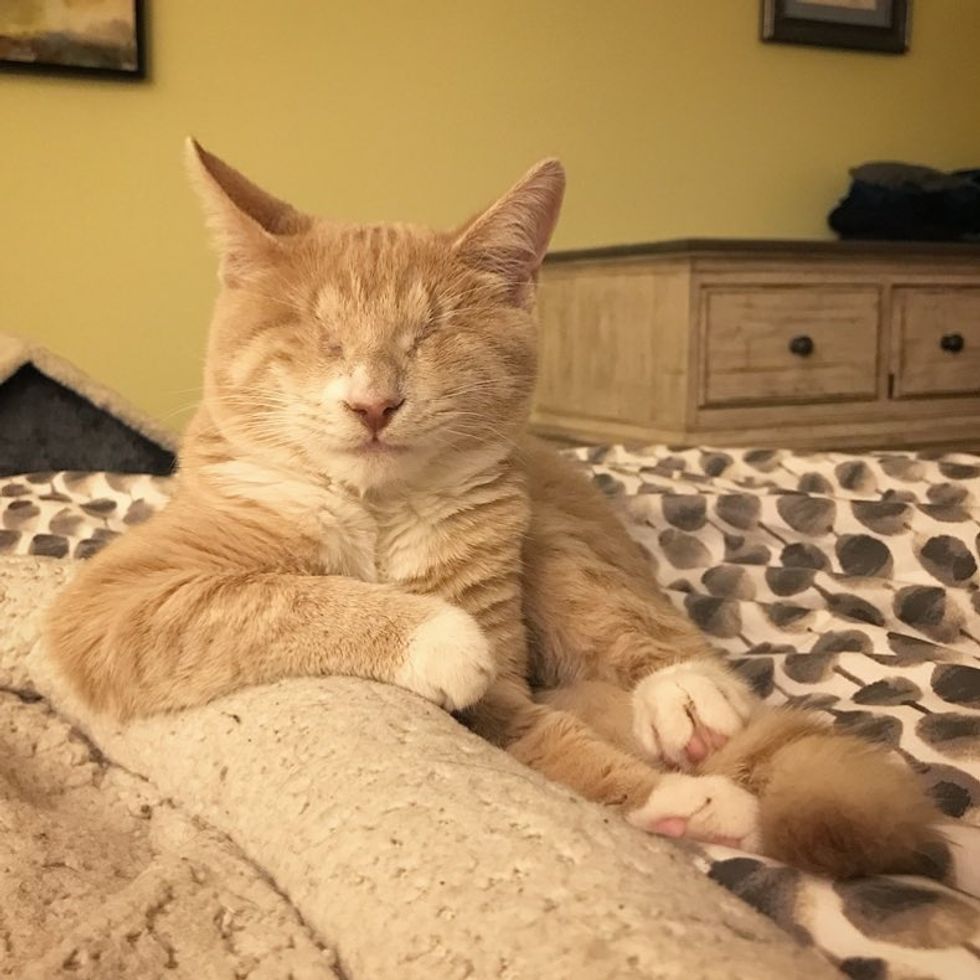 "He compensates for his lost vision by paying closer attention to sounds and smells. He also relies on his whiskers a lot."

Bop does so well on his own that he doesn't need a "seeing-eye" guide, but his brother, Boop, is never far from him. He likes to lead Bop to explore new places. 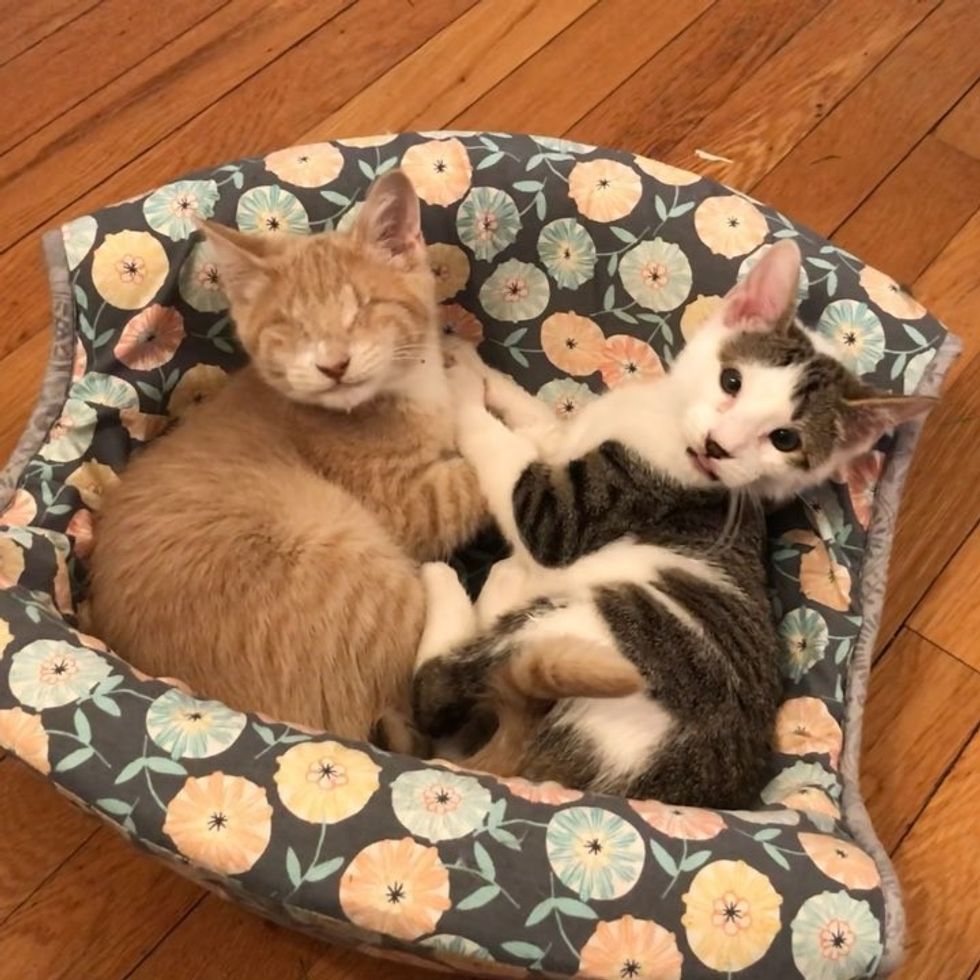 "If Boop jumps onto a dresser, Bop can hear how far away Boop is and can follow his lead," Jen told Love Meow.

They chase each other around the house, wrestling with the resident cats and cuddling hard with their foster parents. Bop is a adventurous little guy who takes on each new challenge with great enthusiasm. 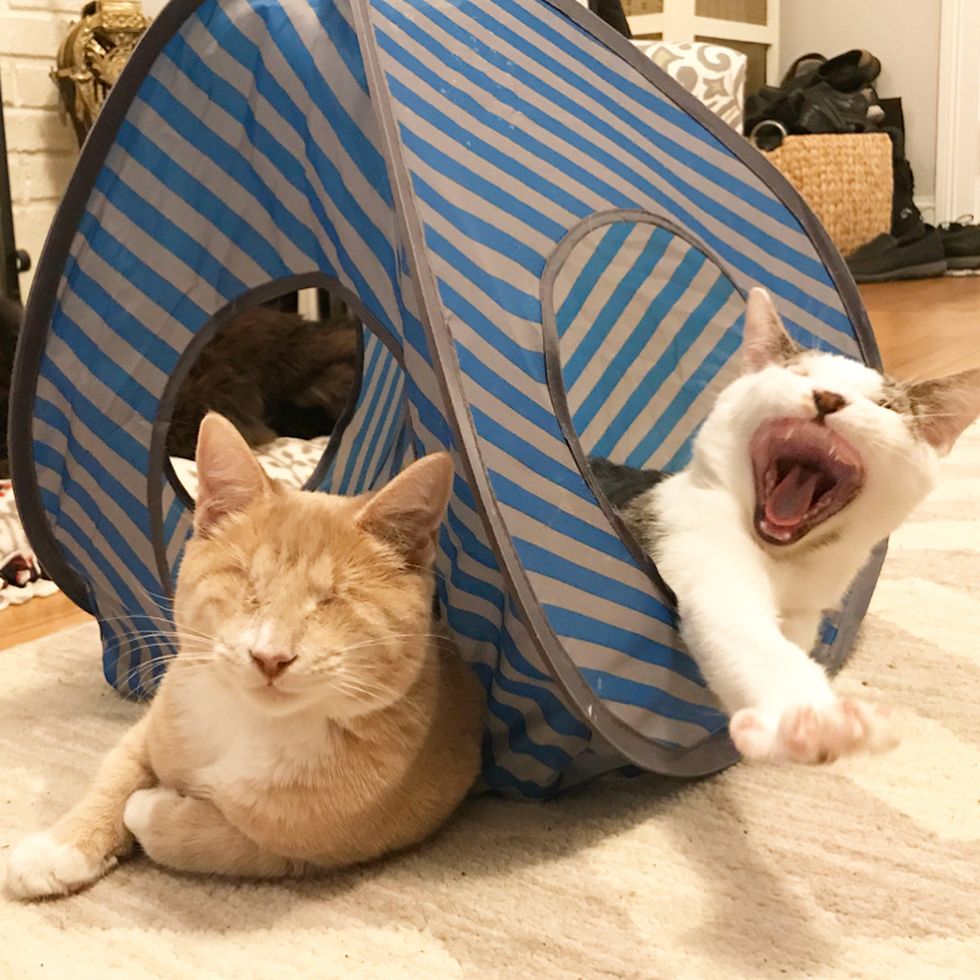 "Aside from being brave, he is also a total love bug. He excels at making biscuits, loves to lick noses, and gets so excited about being pet that sometimes he can't settle down long enough to get pet!"

Bop, Boop and Pokey (resident cat) playing on the stairs together with lots of fun toys. 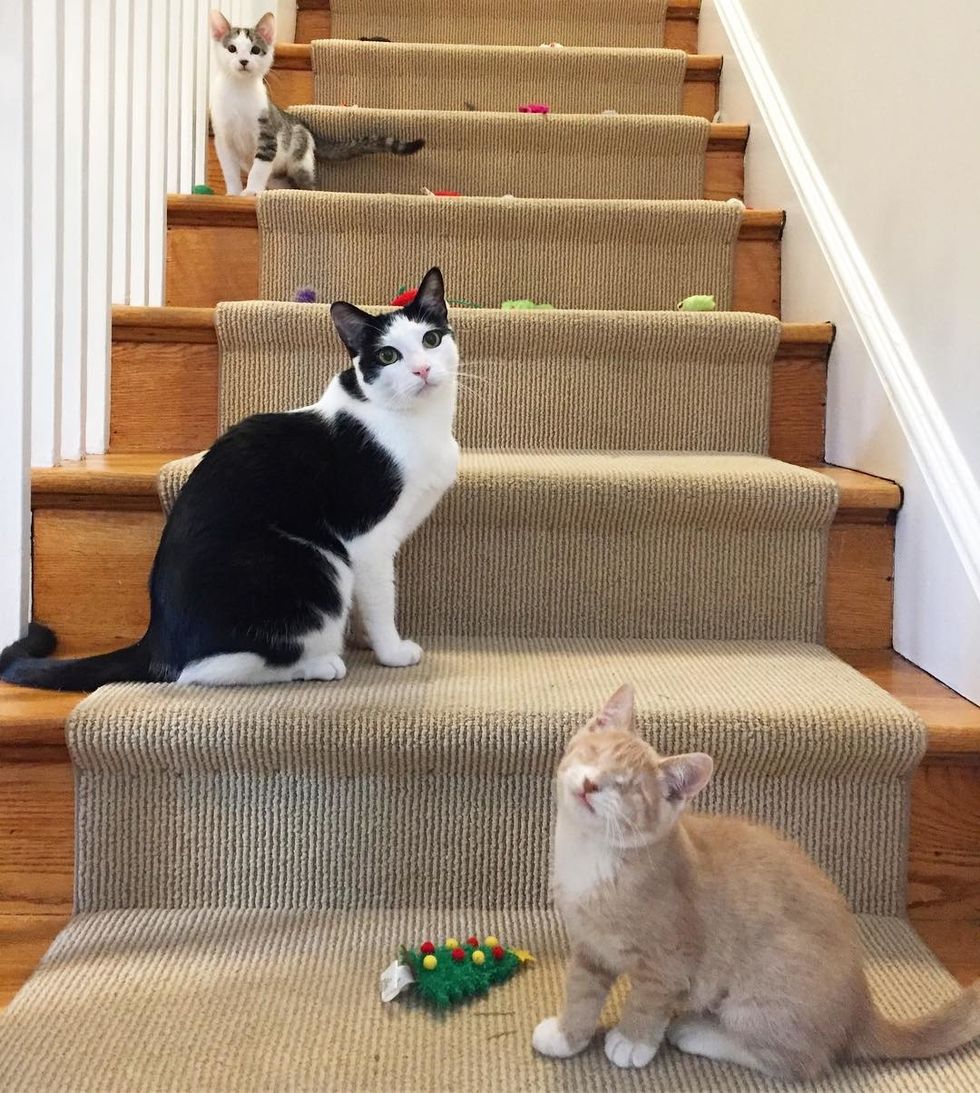 "Bop also makes the most adorable little sounds. I think that because he doesn't always know where we are in the house, he likes to announce his movements. He'll come running down the stairs, meowing the whole time, so we just chat back at him - that way he knows where we are and can find us easily," Jen told Love Meow.

Bop and Boop are always together and share an inseparable bond. 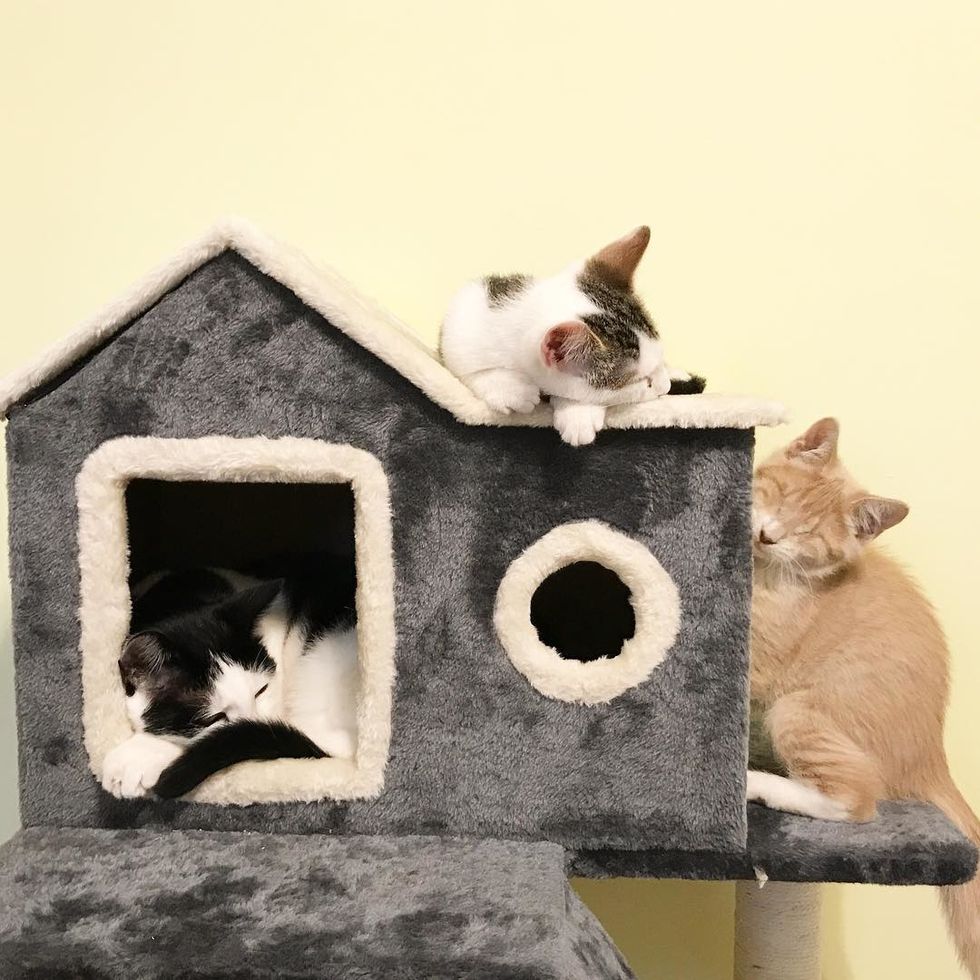 After Boop came back from the vet, Bop offered his brother some much-needed comfort and cuddles.

He kept Boop company after his surgery. 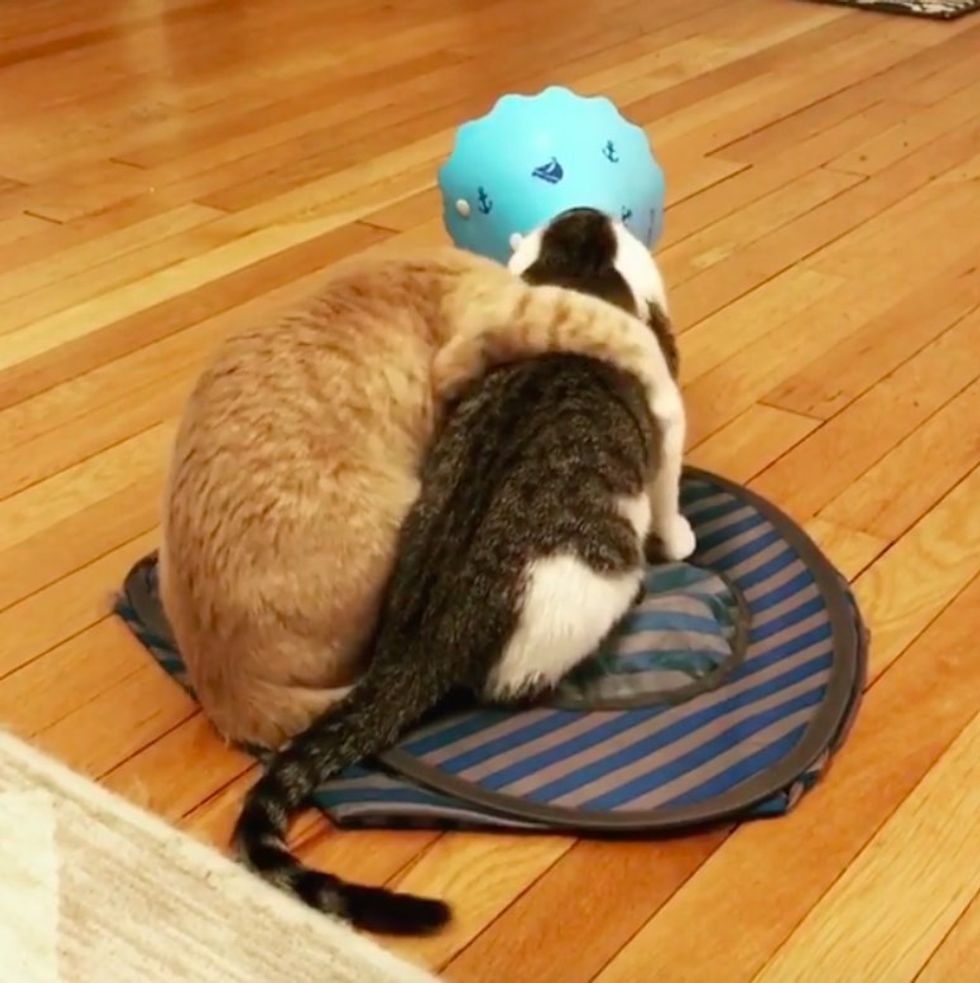 "They are two of the most endearing fosters we've ever had. They are both very sweet and outgoing, but I have never met a kitten as curious, brave, or friendly as Bop," Jen told Love Meow. "He greets everyone who walks in the door, is the first to explore new spaces or toys, and is just a really happy guy." 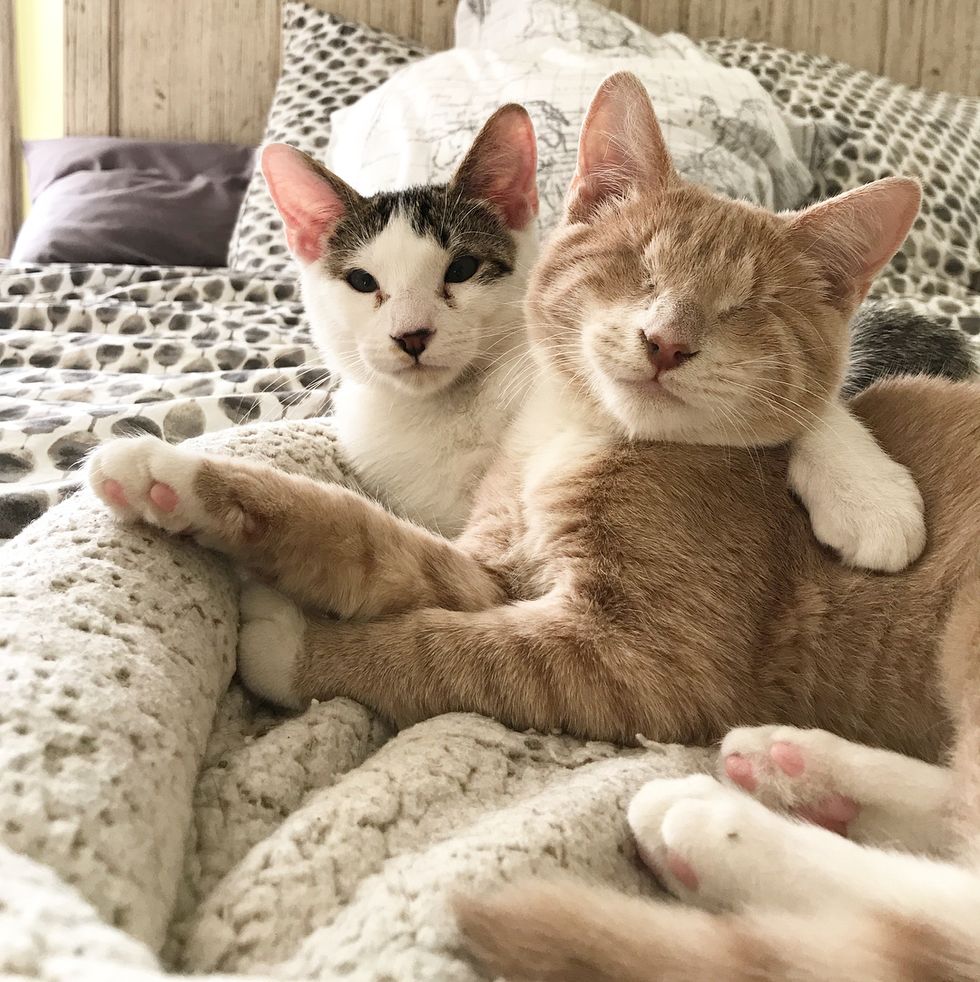 Watch these two amazing kitties in this cute video: