A tiny kitten and a cat found each other at their foster home and instantly bonded.

"Their similarities were apparent from the first day we had each of them," Lizzy Lincoln told Love Meow. 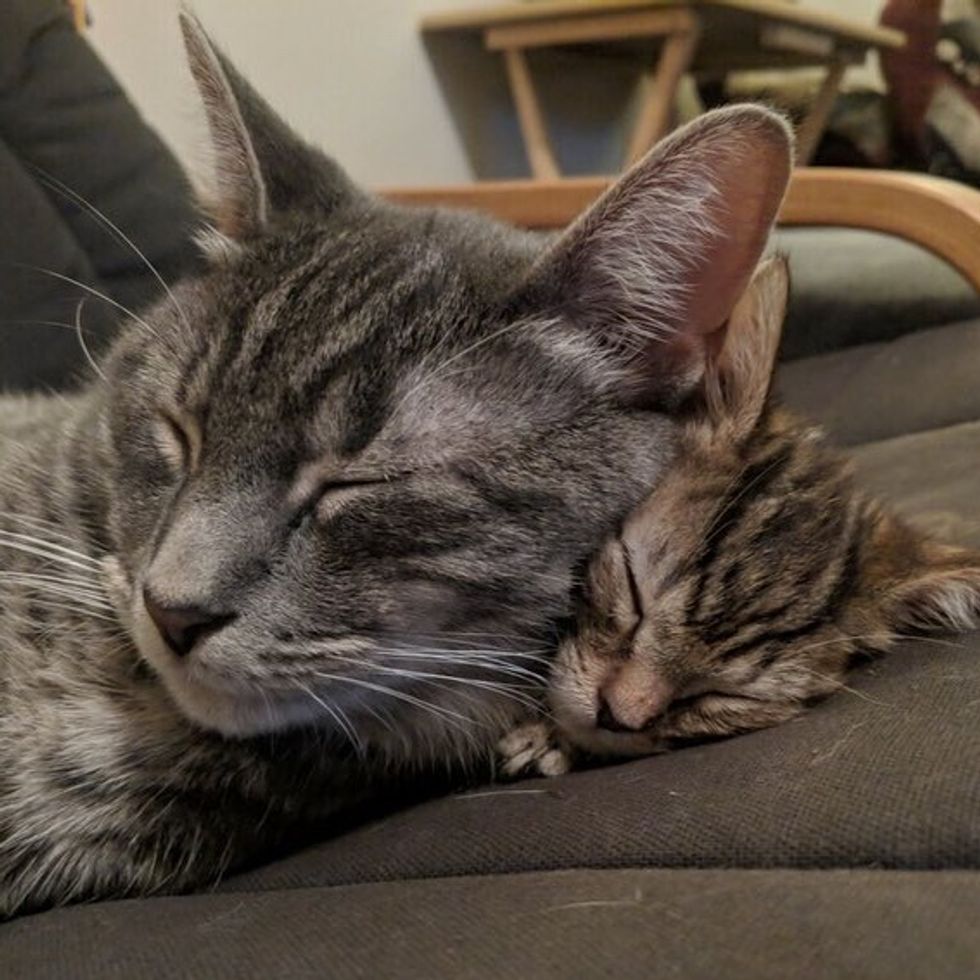 Lizzy and her partner from Brooklyn, New York became foster parents to a litter of kittens (from Small World Animal Rescue) summer last year. "All of them were covered in dirt and street grime. We rushed them to our amazing vet, Alison Animal Hospital," Lizzy said.

The vet warned them that they had a hard road ahead. Tuba, being the runt of the crew, was a challenging case. At six weeks old, he was so tiny that he fit the palm of their hands.

The couple stayed up bottle-feeding the kittens the entire first night. While Tuba's siblings were eager for food, the runty kitty struggled quite a bit. They fed him every hour while rewatched their favorite show (Parks and Recreation) to stay awake.

"He made it through that first night, and wiggled his way into our hearts. He continued to be the smallest as he and his siblings grew." 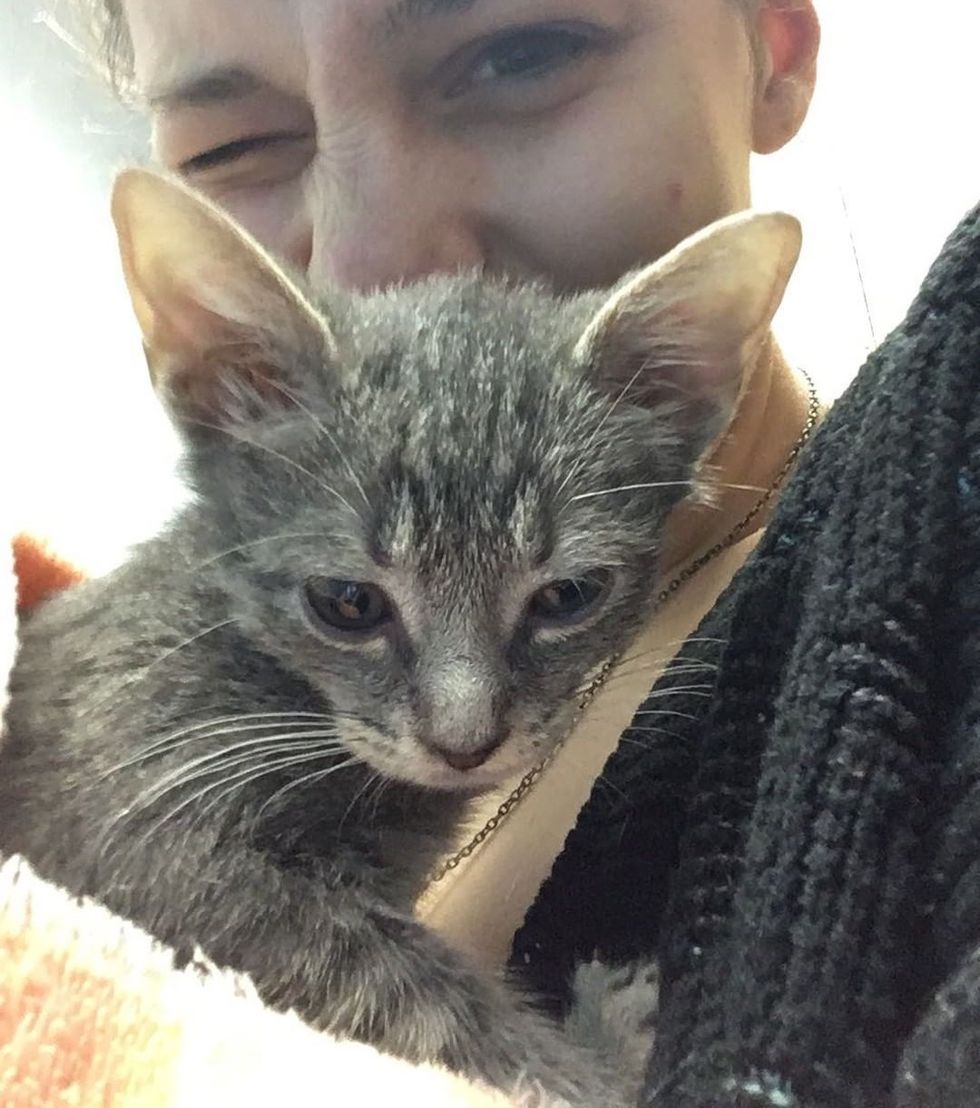 As a runt, Tuba demanded extra attention and love. He became very attached to his foster parents and enjoyed being carried around in a cat-hoodie pocket.

"While he watched his siblings go to loving homes, his early health issues and slow development meant that he has a bit of anxiety," Lizzy told Love Meow. "He was our little miracle dude, but we needed someone who was willing to work through his shyness to see the perfect little guy inside." 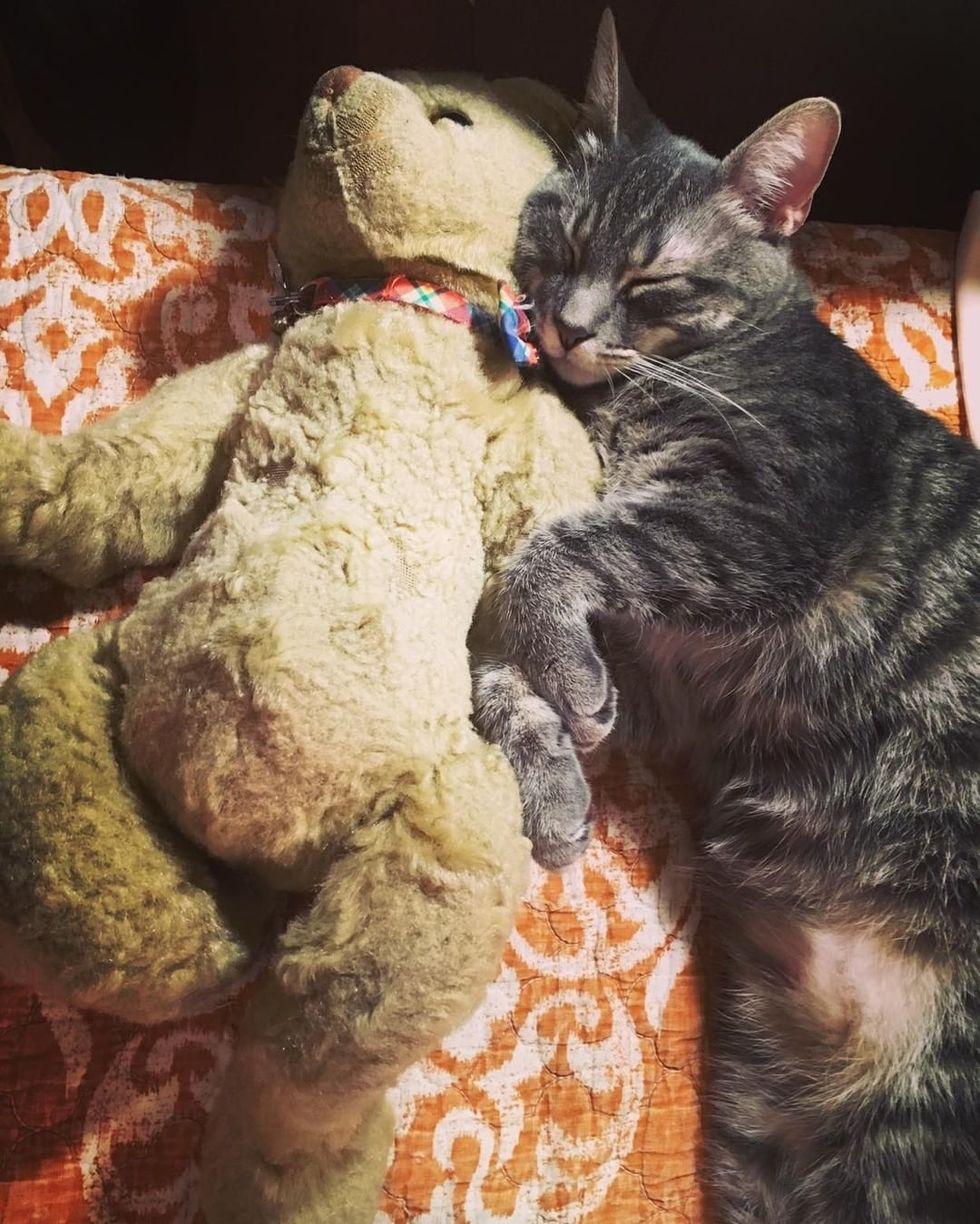 This summer, a little tabby named Maple was brought into the rescue along with his siblings after they were found during a flash flood in Brooklyn. They needed a foster home so Lizzy took them in. Right away, she noticed the little runt.

"His sisters were substantially larger than he was, and we worried — he reminded us of Tuba immediately with a teeny body and big ole alien head. We knew he would need extra feedings if he was going to make it," Lizzy said. "So my partner and I put Parks and Rec back on and buckled in for extra feedings."

Maple was syringe-fed around the clock until he was strong enough to eat from a bottle. "Eventually the little man became just like his big brother, Tuba — nothing made him happier than sitting on our shoulders purring like a motor and snacking intermittently."

While his siblings were starting to explore, he was still trying to figure out how to stand and walk. "Just like Tuba, he developed slowly. He just wanted to sit on our laps for warmth and purr." 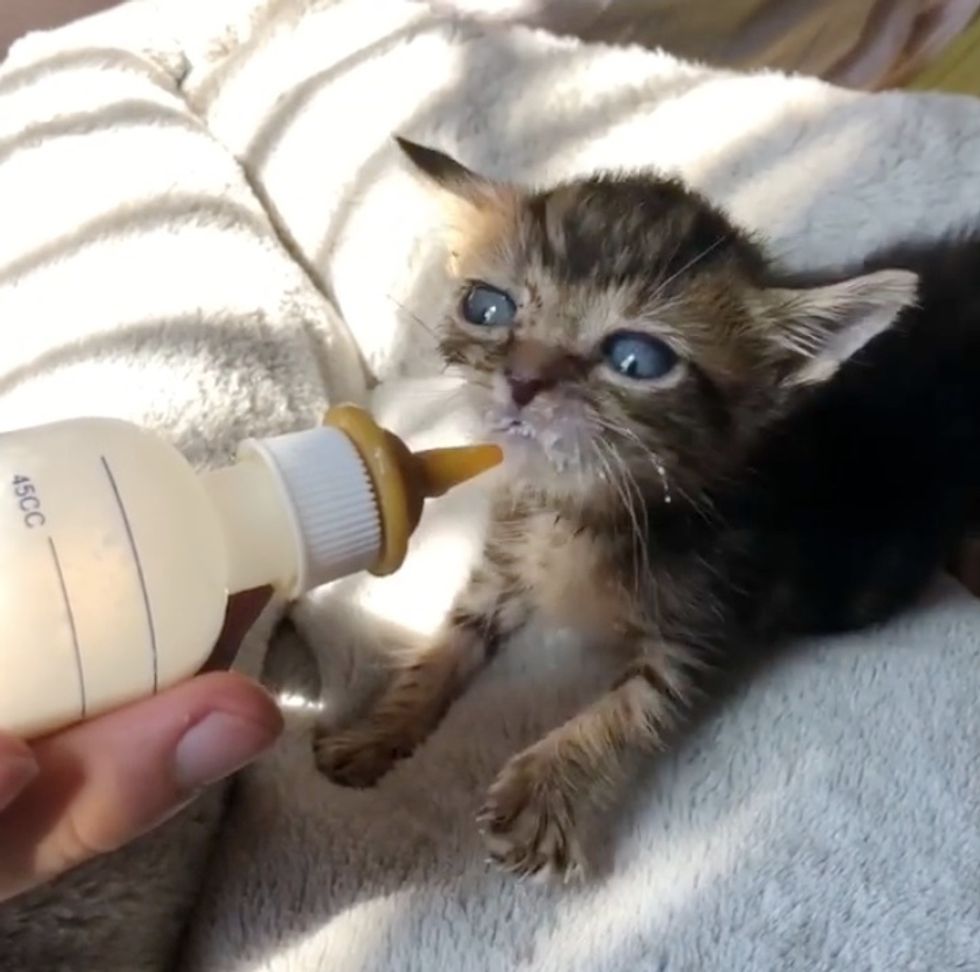 When Tuba and Maple's paths crossed, the big brother immediately took to the tiny kitten. "It was like he could smell that little Maple needed a buddy — he started grooming him. Maple loved the warmth and company," Lizzy added.

"Having lost his mama so early, I suspect the heartbeat and fuzz of another cat made him feel safe. Tuba slipped into his role as mama really quickly and would let the little guy make biscuits on his fur and sleep on his belly." 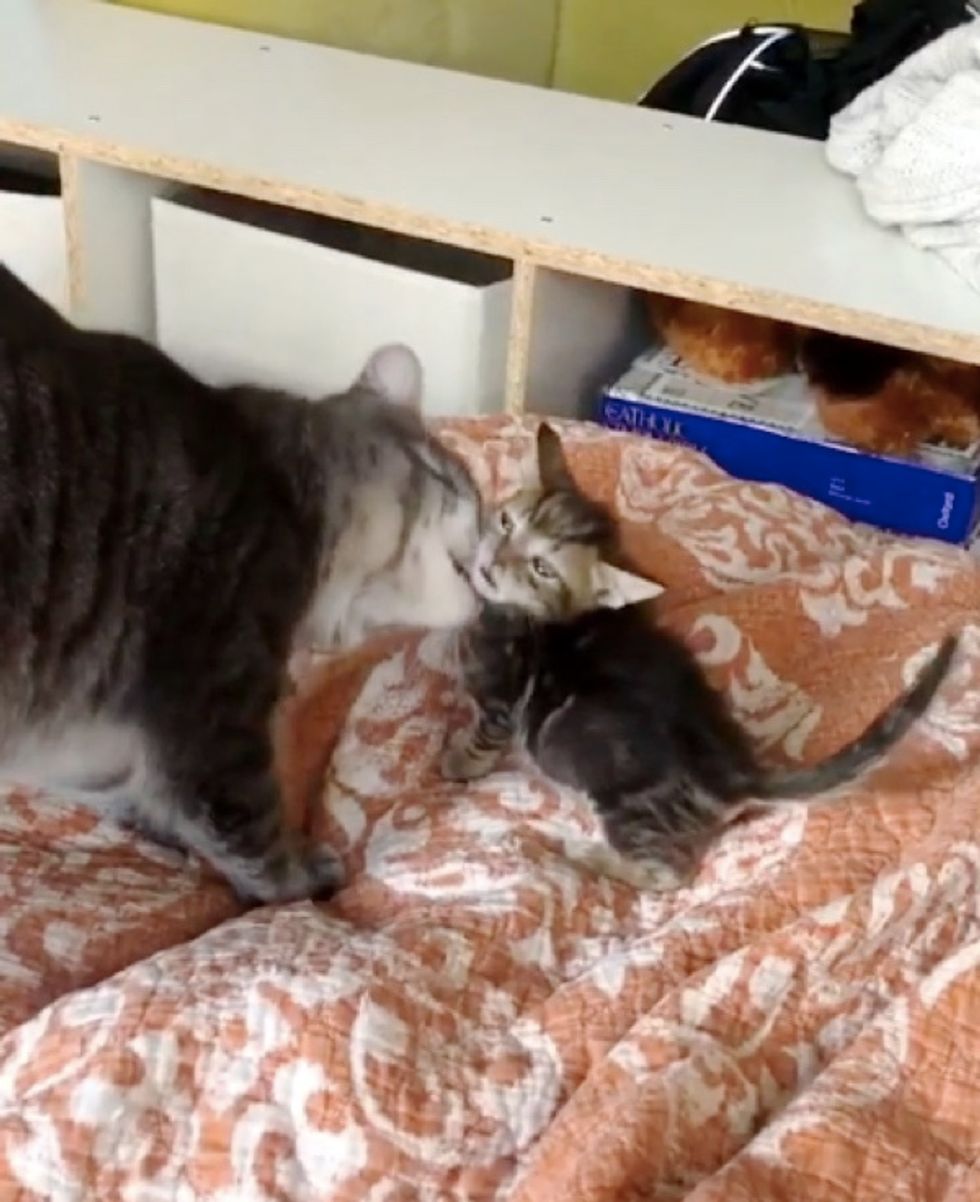 The more time Tuba spent with Maple, the more confident he grew each day.

Watch Tuba and Maple in this cute video:

2 kitties, both runt in their litter, become bonded friends youtu.be

Maple looks up to his big brother who teaches him feline skills, provides him comfort, and keeps him company so he won't feel alone.

"When you're a little cat, you need a little extra love. Tuba had it to share and didn't hold back." 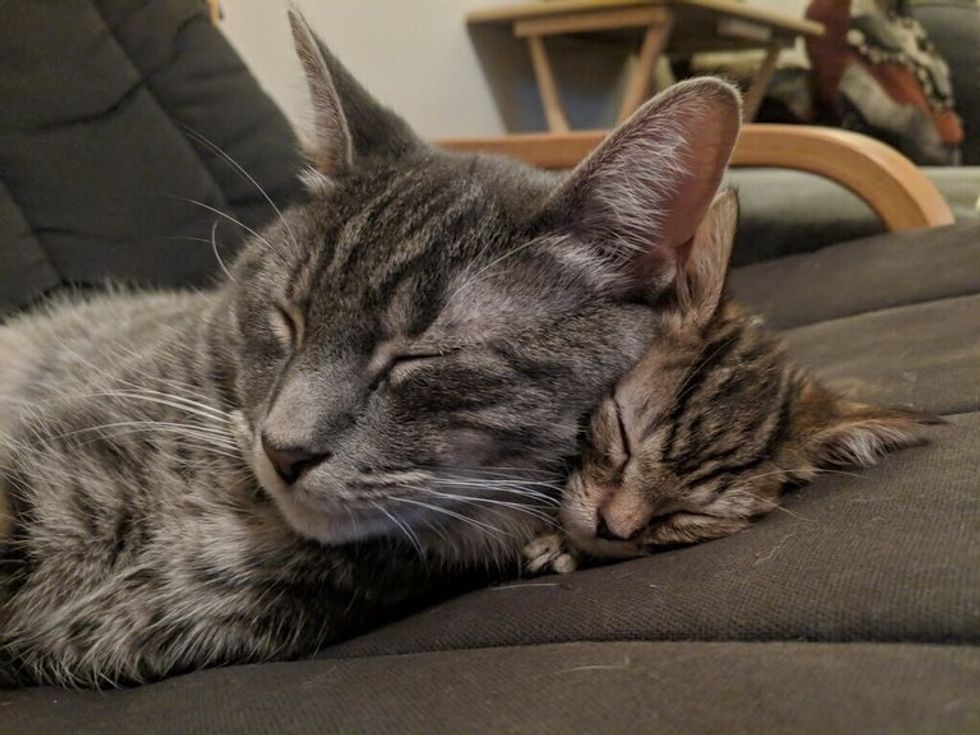 When Maple became strong on his feet, he would follow Tuba around, learning to drink water and eat solid food.

"If we were looking for little Maple, there was a good chance all we had to do was find Tuba: there they'd be, playing, napping, or learning about something new in the people world." 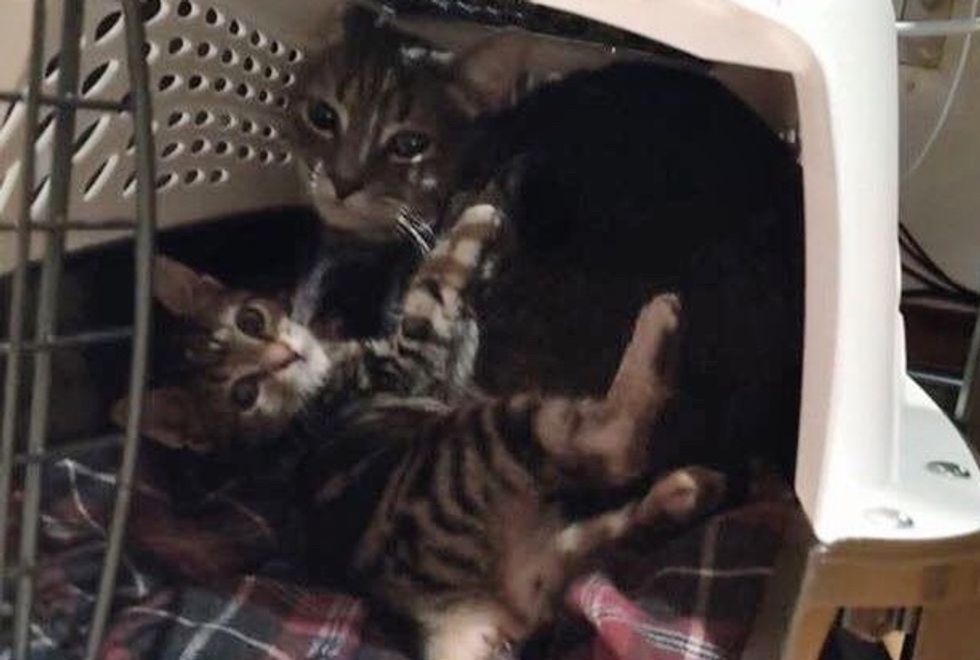 A couple of months later, Maple was ready to look for a forever home. Noah who fell in love with the two kitties, knew they couldn't be separated.

"When they got adopted together, we were thrilled. Their new dad was patient with Tuba and gained his trust," Lizzy told Love Meow. 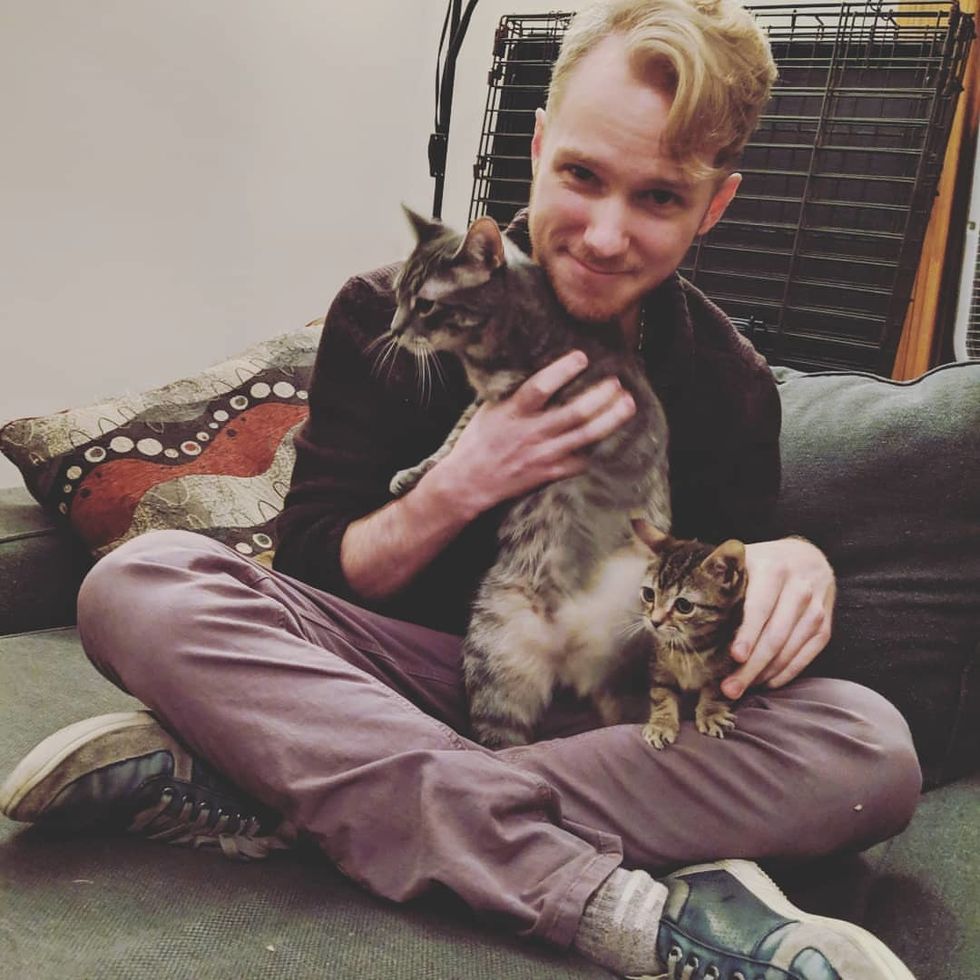 "Now they get to have their own home and take care of each other - they get to be best friends forever while Maple continues to grow," Lizzy said.

"I like to think Tuba was happy to pass along the luck and love that kept him alive when the odds were stacked against him." 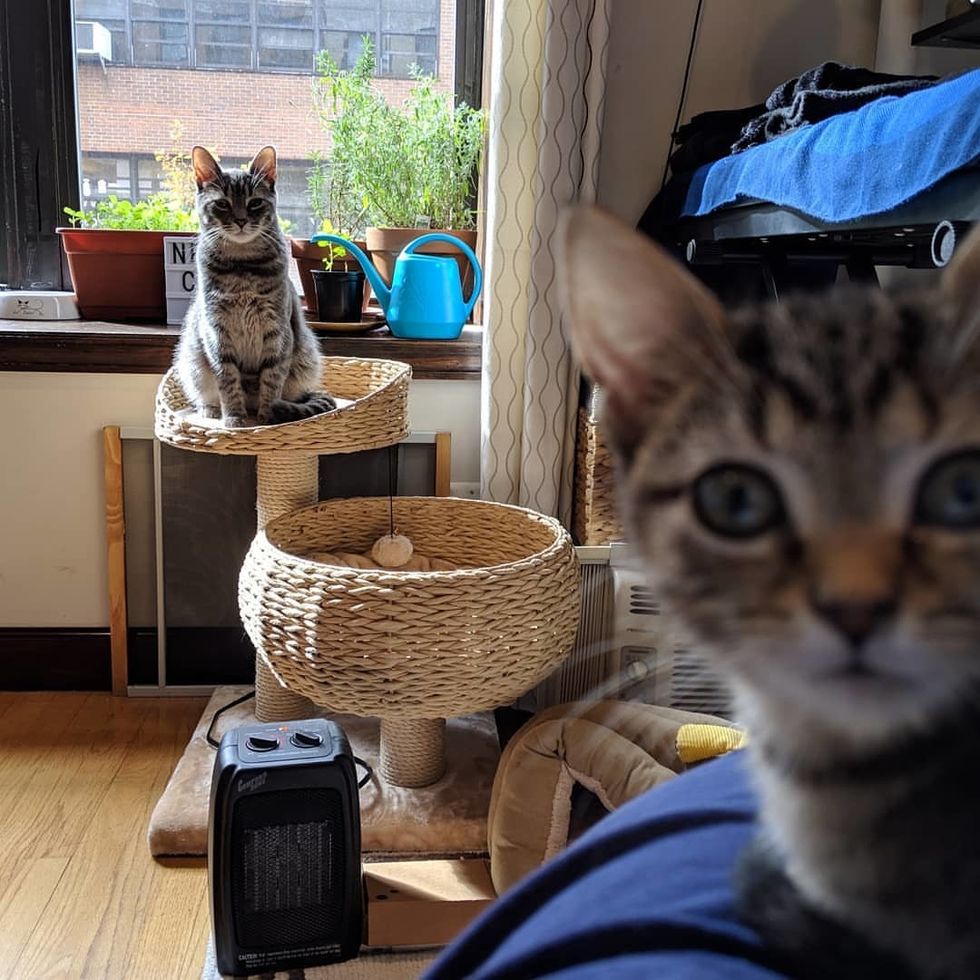 Related story: Shy Cat Who Spent Years on the Streets, Cuddles with Rescuers - His Life Is Forever Changed