A kitten arrived as an orphan eager for warmth, and found a cat who didn't hesitate to take him in. 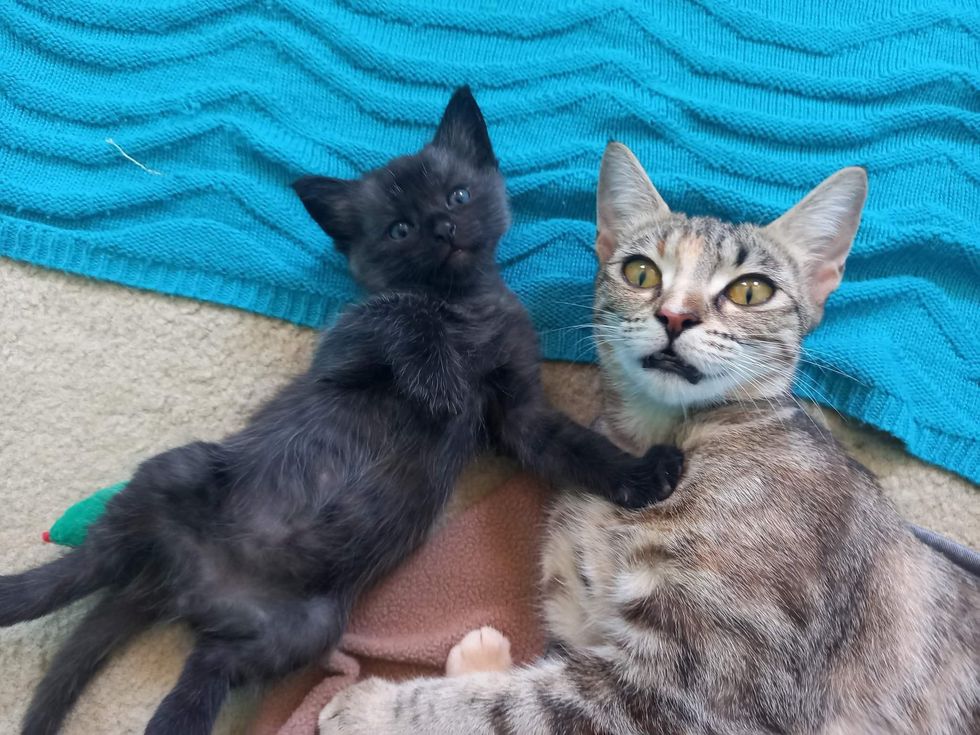 Sirius the kitten and Cassie the cat momBest Friends Felines

Best Friends Felines, a rescue group in Brisbane, AU, took in a friendly pregnant cat, Cassiopeia (aka Cassie), who needed a foster home. As weeks went by, her belly continued to expand, and she went into labor on a Friday morning.

"Just after her second baby was born, we were told about a tiny 48-gram, 3-day-old kitten needing a bottle carer or surrogate mama cat," Best Friends Felines shared. "We were warned that he didn't have much chance of making it, but if we were willing to try him with Cassie and she accepted him, he at least had a chance."

Volunteers of the rescue immediately went on a 90-minute round-trip to pick up the little preemie. By the time he arrived, Cassie had birthed her third kitten into the world. 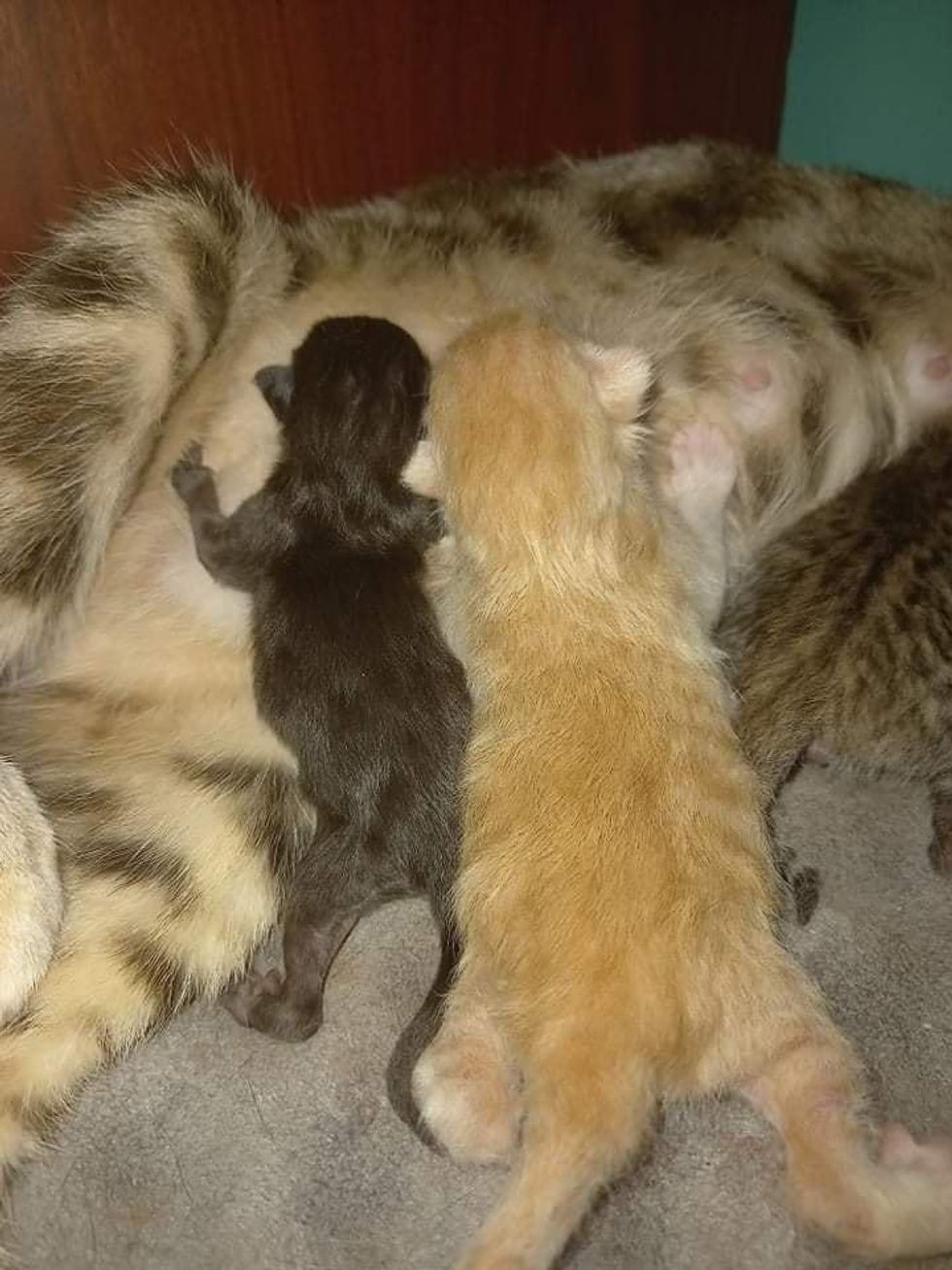 They gently placed the orphan baby next to the cat mom and hoped for the best. "To our relief, Cassie instantly took to him and started cleaning him. The little guy was a fighter and seemed strong, but needed a lot of help to get latched to nurse."

"Cassie ended up having a rather long day and didn't have her 6th and final baby until just before 10PM," Best Friends Felines wrote. 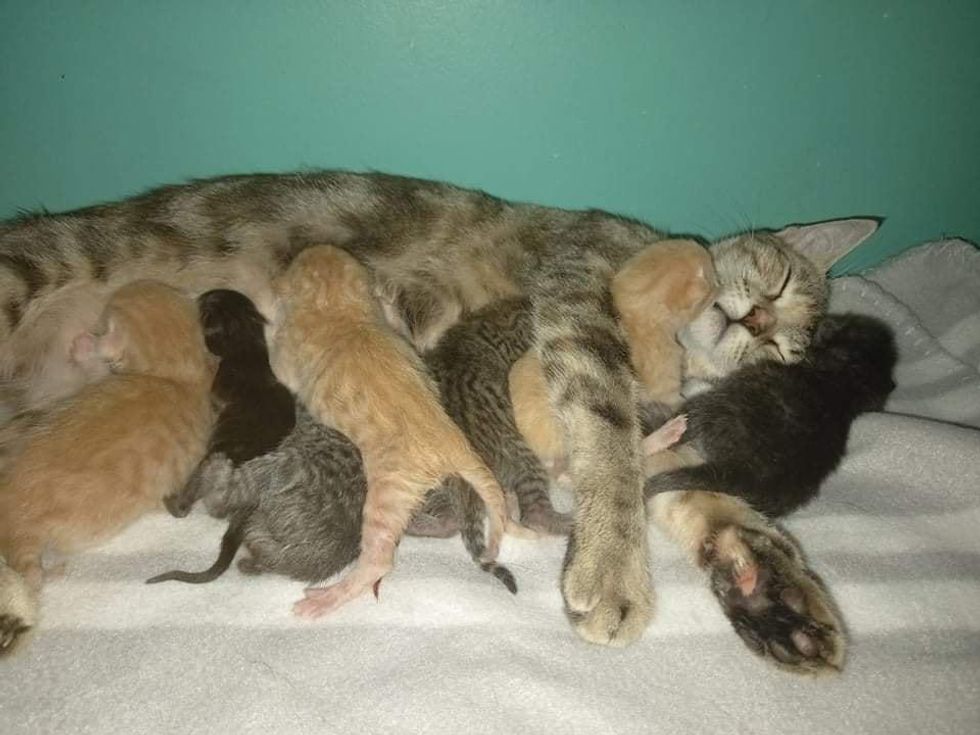 With six new littermates (all boys) by his side egging him on, the adopted baby named Sirius became better and stronger at nursing. "We were checking on the family every 2-3 hours, ensuring the little guy was nursing and not losing weight. He continued to amaze us with his fight and weight gain."

Sirius who started out as a preemie, was on his own little curve. "He finally hit triple digits and was 101grams at nine days old." 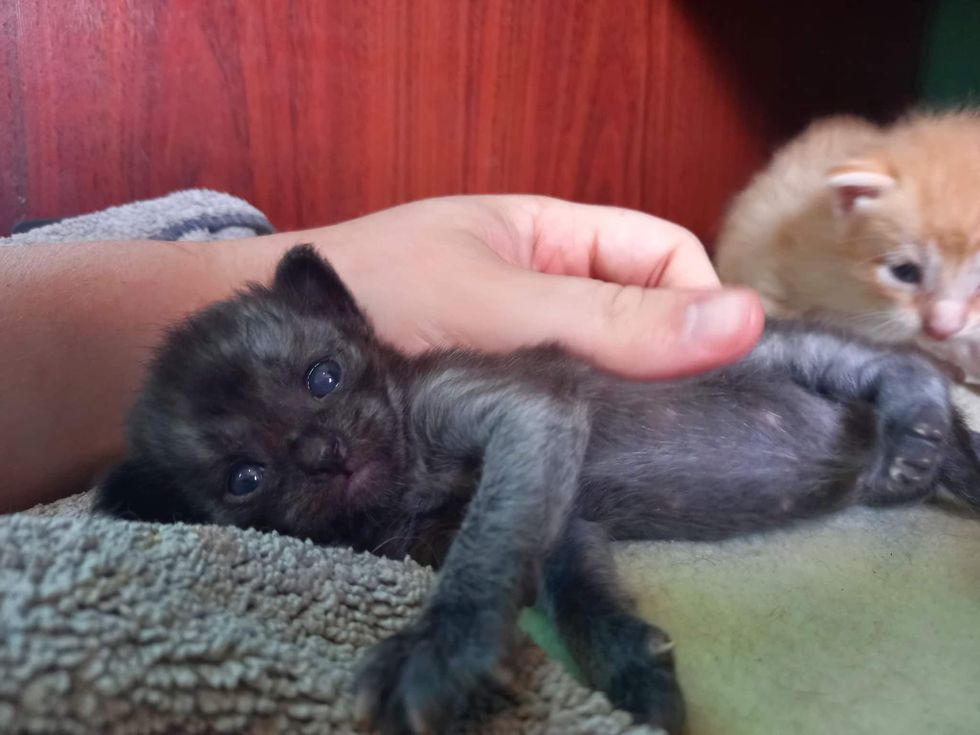 The little guy didn't want to be left behind by his brothers, and kept forging on with his ravenous appetite. By the second week, he was reaching his milestones well on time, and starting to move around his nest, finding his feet.

When the clowder of kittens were getting more active and mobile, their energy rubbed off on Sirius. "He was the most insistent, and loved belly rubs and being cradled in our hands for kisses." 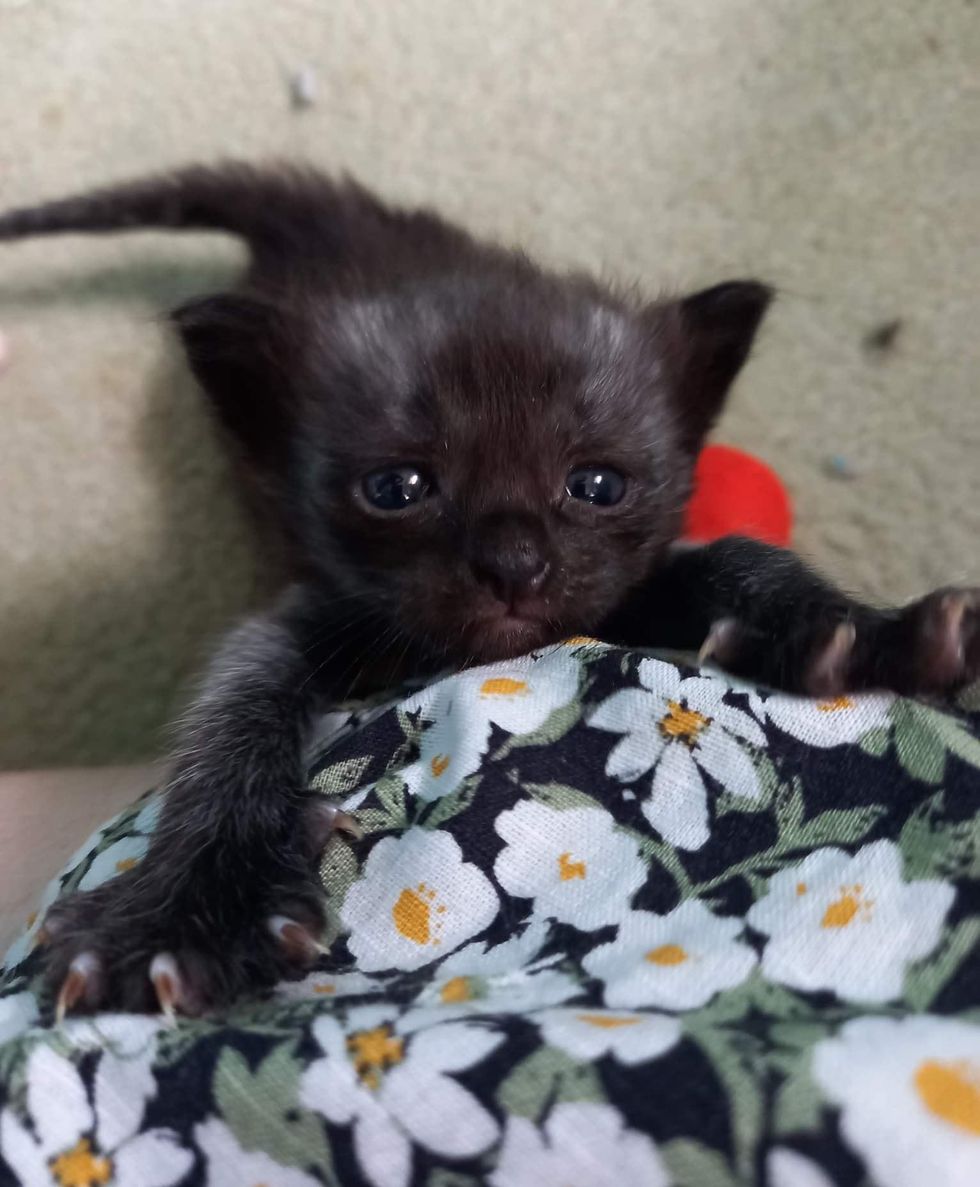 "He quadrupled his weight in less than three weeks and started to turn silver with what's called a 'fever coat.' Fever coat kittens are usually born silvery after their mothers were sick while pregnant, but sometimes kittens can develop it after they've had a bit of a tough time."

Sirius looks as if he is wearing smokey silver highlights on his coat. As he gets older, his fur will eventually turn back to his gorgeous black. 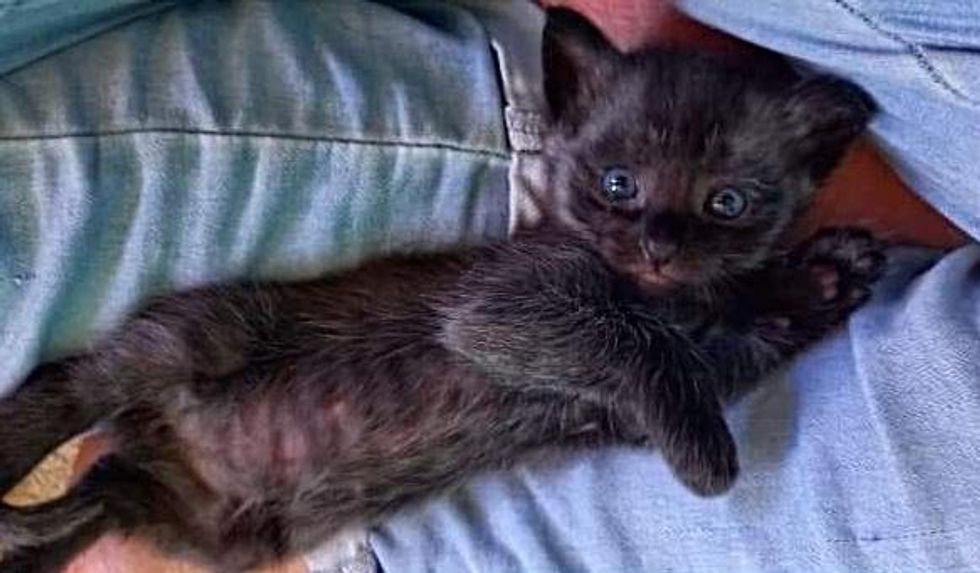 Because Sirius needed extra care to help him stay on track, he developed a special connection with his foster carers.

"We knew he would be a people kitty from early on, and he just loves coming over for a cuddle and was the first to work out how to climb into a lap." 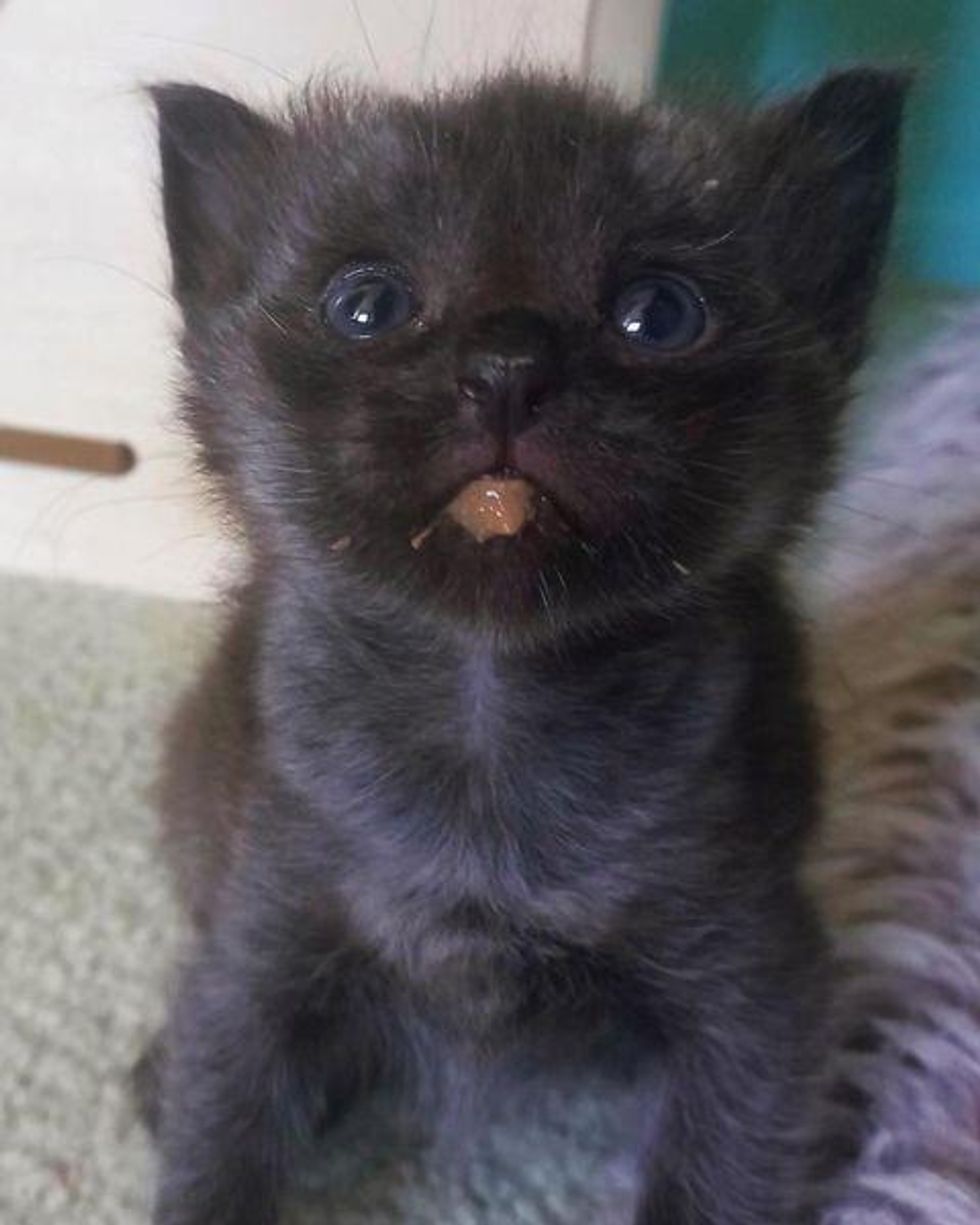 At seven weeks old, the kittens are thriving and growing by leaps and bounds. Mama Cassie has taken a backseat and is spending more me-time, trying to recuperate, gain weight, and focus on herself.

Sirius is still the smallest one of the bunch, but what he lacks in size, he makes up for in personality. "He always zeros in on us when we enter the room, pretty much tripping us up if not outright lying on our feet, in our lap whenever we sit down," the rescue added. 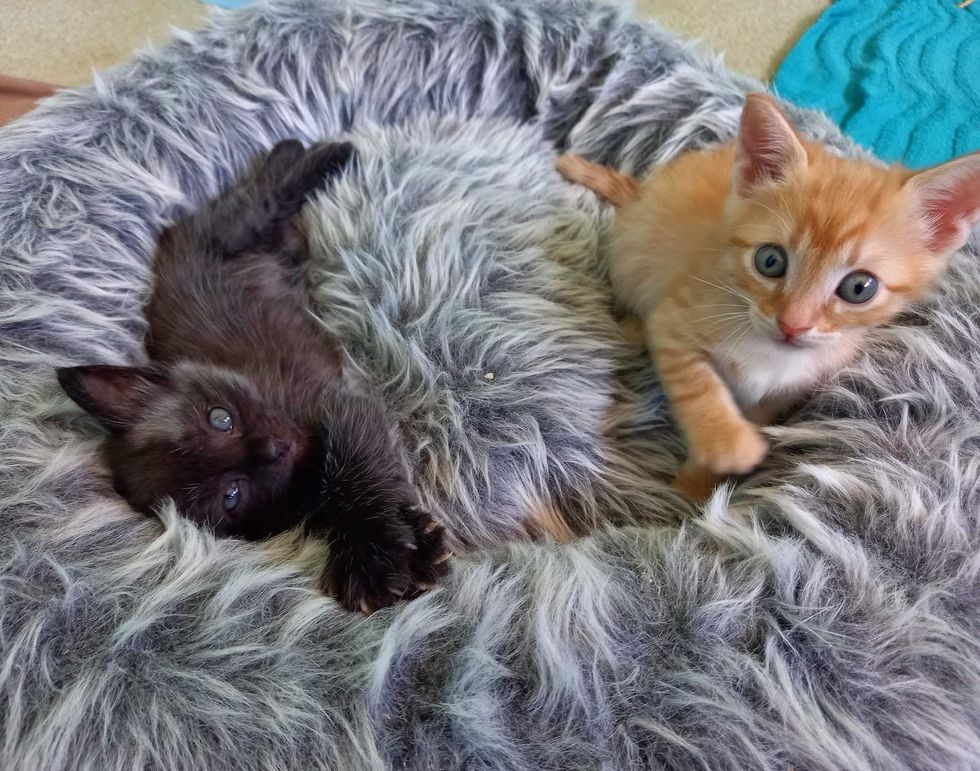 "He flops, rolls and purrs automatically for belly tickles, and is not afraid to use his voice if he thinks you're ignoring him."

Sirius has blossomed into a gorgeous mini panther kitty with stunning silver highlights. "He's amazed everyone with his growth and how healthy he is, never taking a backwards step, and is now not much smaller than some of his siblings." 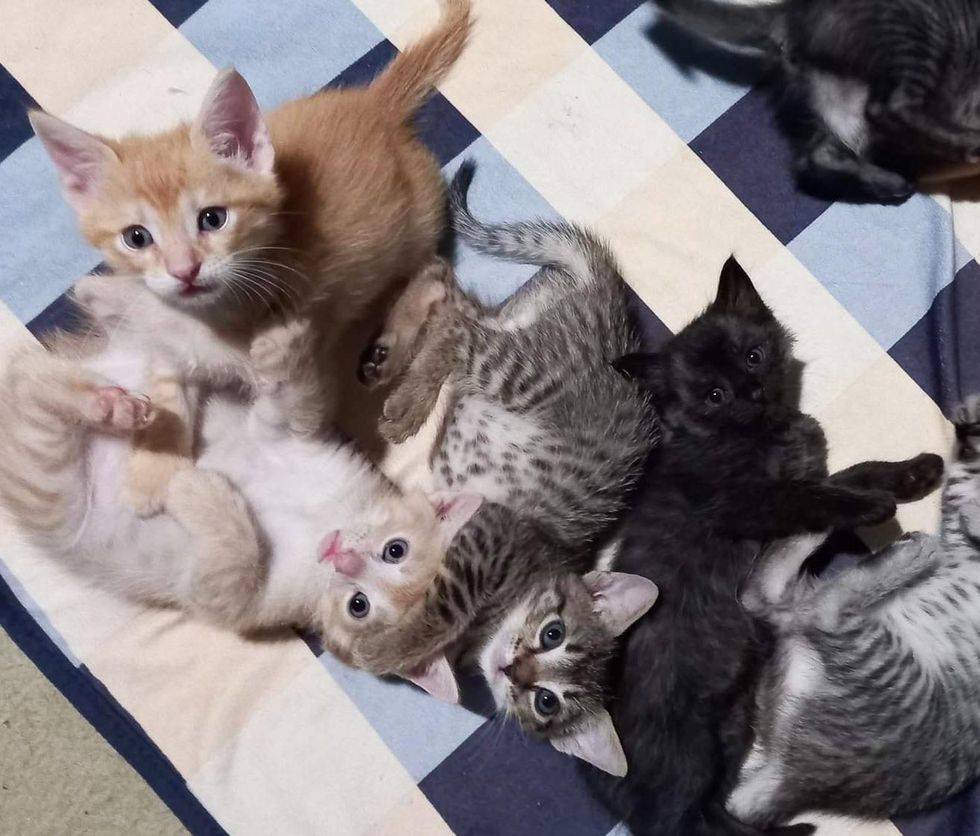 Sirius and his brothersBest Friends Felines

"All the extra love and care that went into Sirius in his early weeks of life, seem to have turned him into the most lovable little guy ever."

Sirius may be small but he is full of sass. He plays as if he were much bigger and taller, tackling even the biggest brother. He is completely fearless and tries to play-fight with the resident dog who is a sweet, gentle giant. 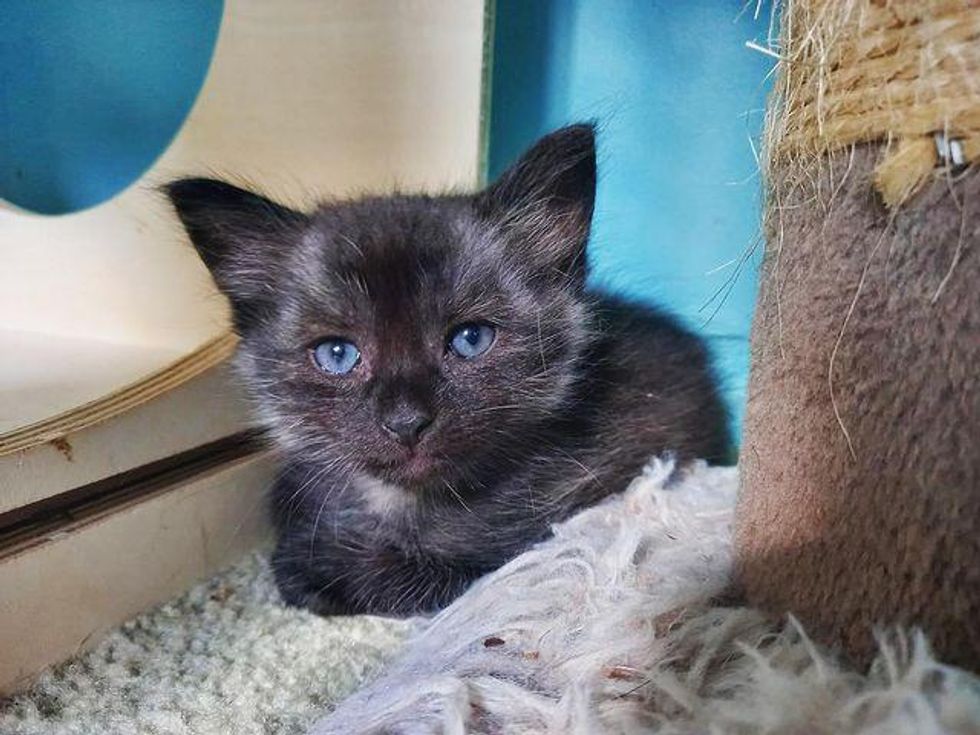 After an incredible ride, Sirius, the little wonder cat, is ready to find his forever home, and live out his life as a king, being loved and spoiled. 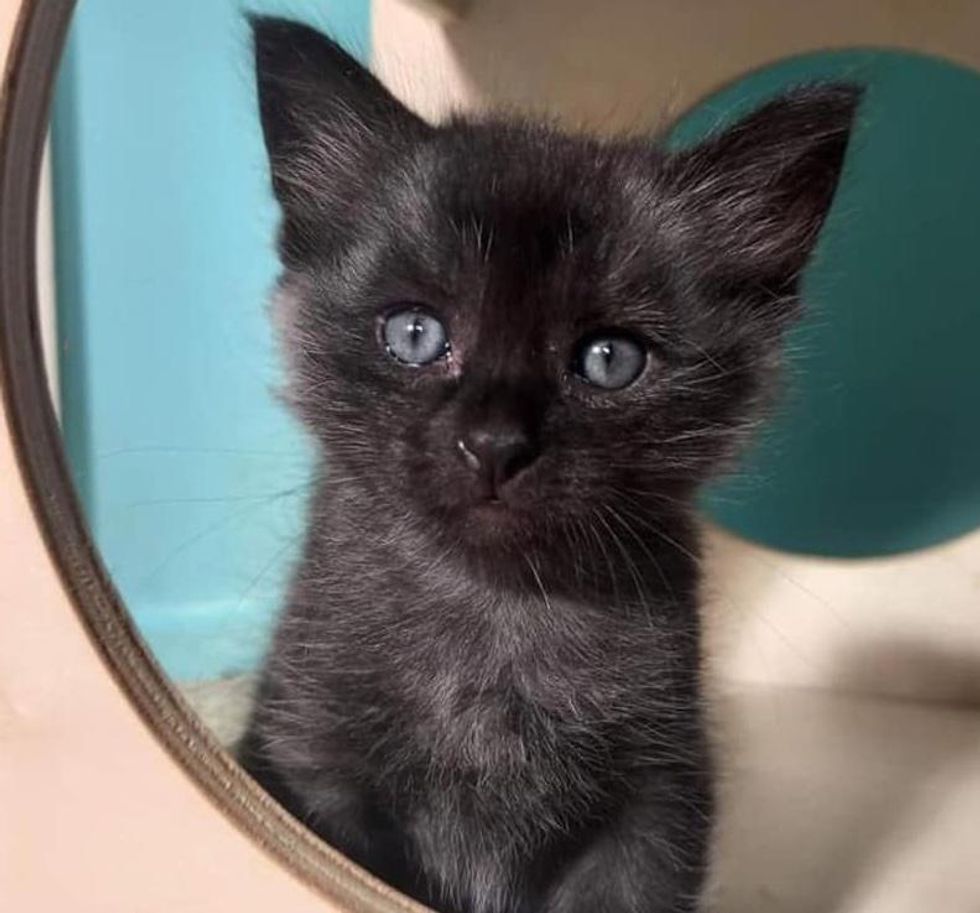 Related story: Kitten Who Is Done with Outdoor Life, Decides to Sit on the Driveway of a Home Until She is Taken in