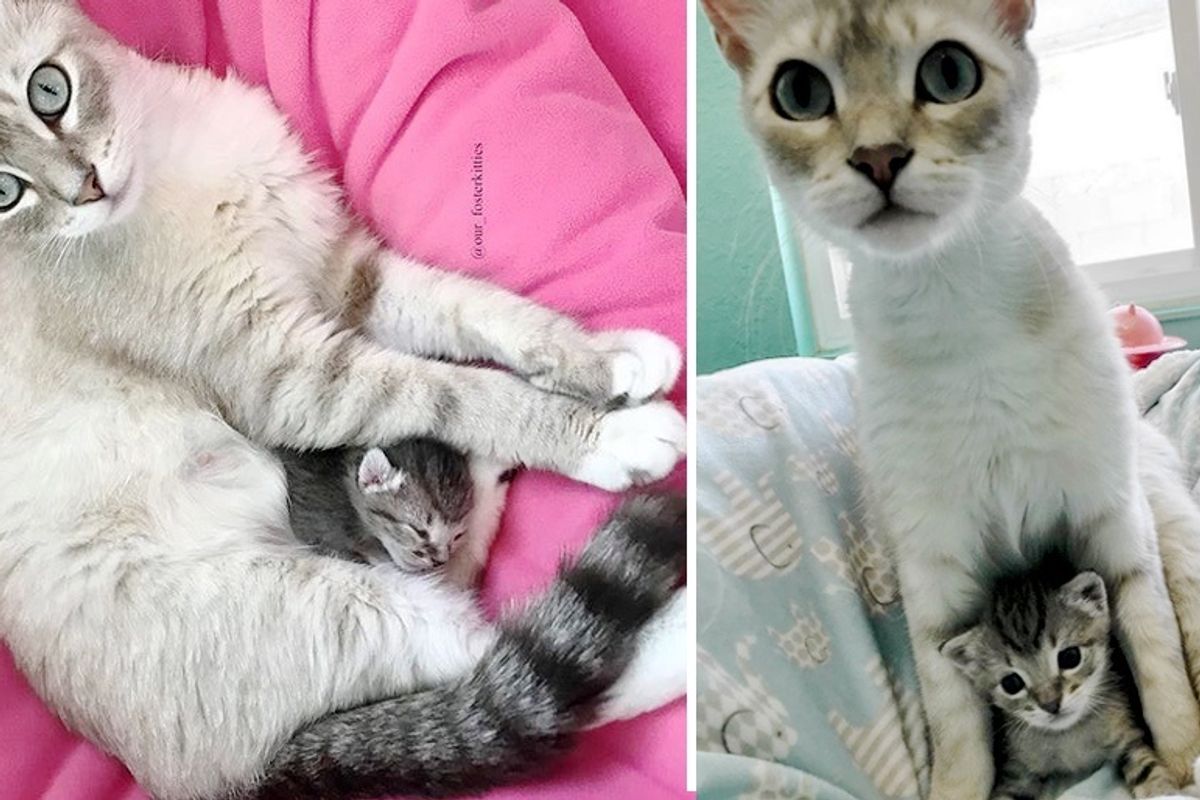 A kitten who was found outside without a mom, was taken in by a cat who needed him. 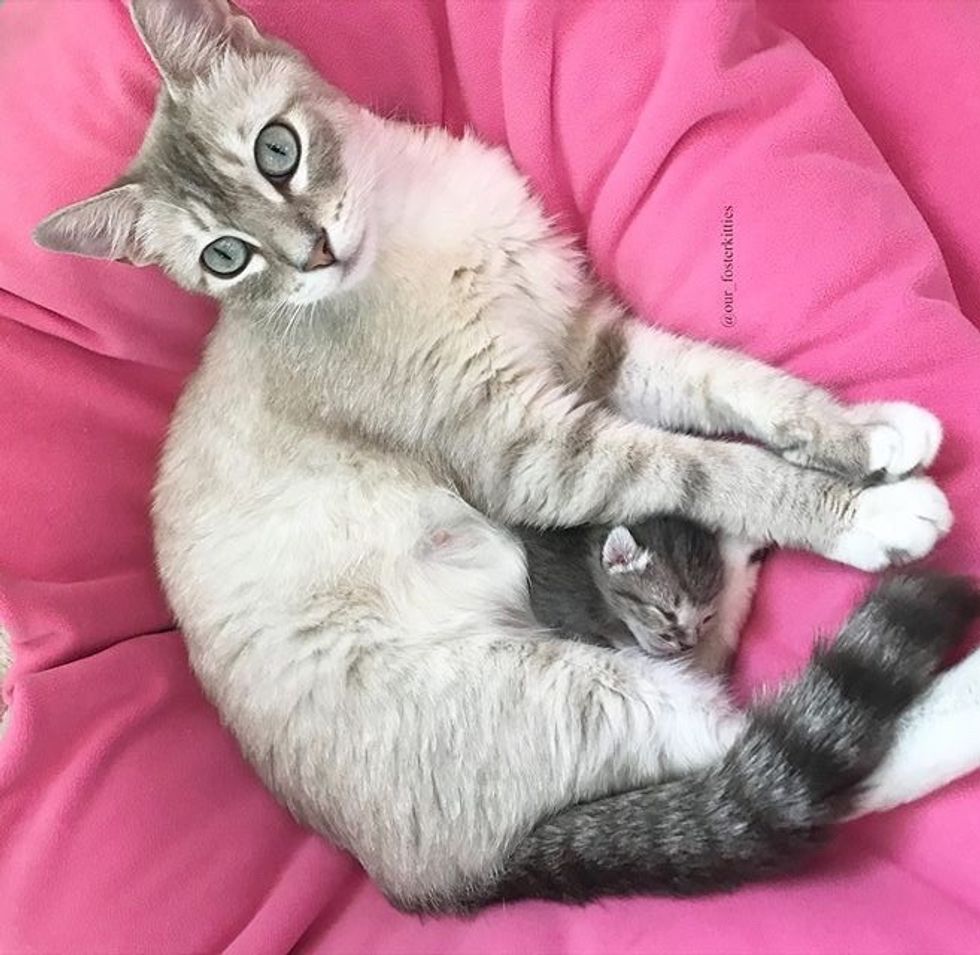 A 3-year-old cat was brought to the Nevada SPCA for a chance at a better life. She was heavily pregnant when she was found. The cat named Misty was treated for a wound on her thigh and so thankful to be helped.

Kathy Stankiewicz, a volunteer of Nevada SPCA, picked her up so she could have a comfortable home to stay. A few days later, Misty gave birth but quickly fell sick and was overcome by stress. Despite their very best efforts to save the little family, her kittens sadly lost their fight. Though Misty was able to recover, she was left heartbroken.

Around that time, Kathy was contacted about a tiny singleton who was found outside without a mom. She offered to take him home, hoping Misty would accept him.

When Misty heard the kitten's cries, she immediately perked up, walked right up to the baby and started grooming him. "She readily accepted him as her own," Kathy told Love Meow. 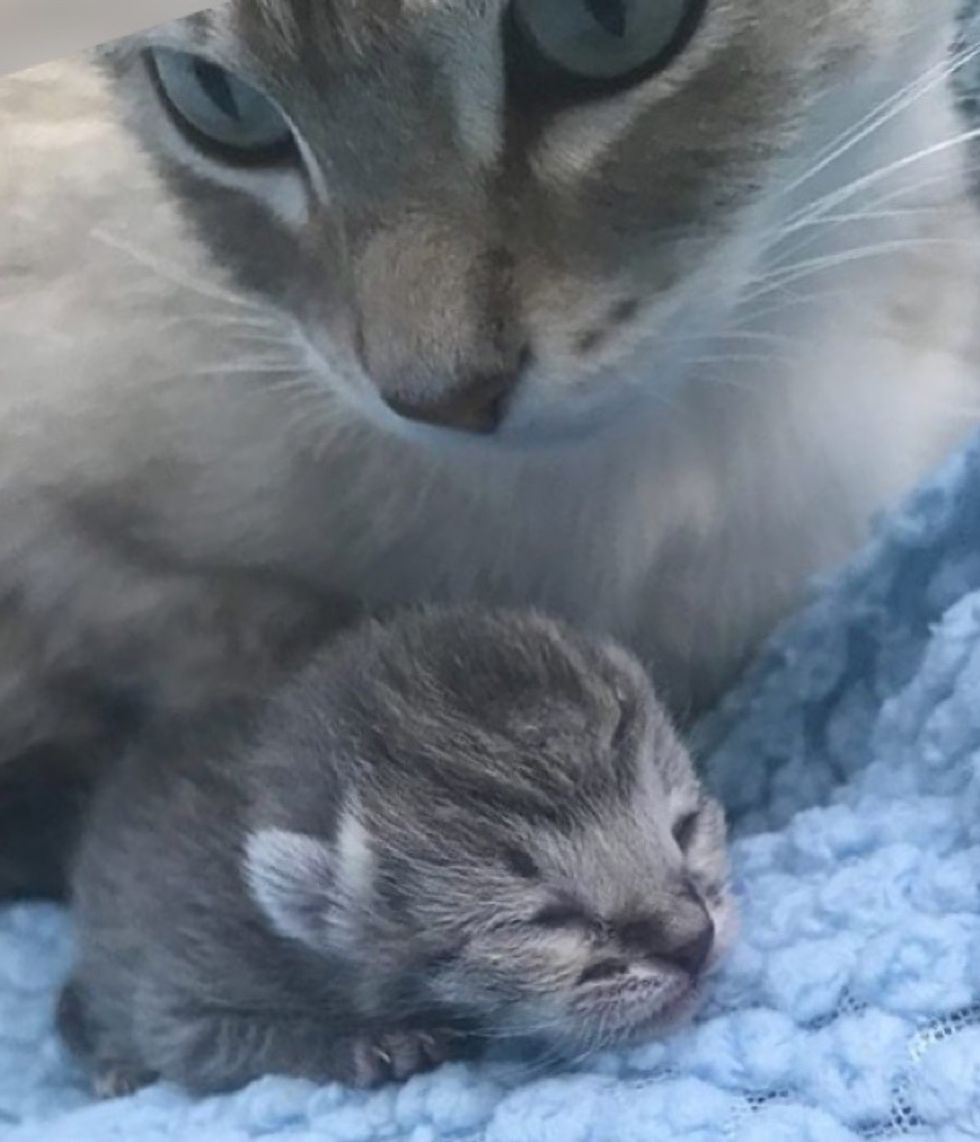 Misty took the kitten (named Sunny) under her wing and became very protective of him. The little bundle of fur vivified her maternal instinct. "It took the kitten awhile to latch on, but once he did, Misty hardly left his side the first week."

She was nursing and keeping the kitten meticulously clean, around the clock. "Sunny saw her as his true mom. It was love at first sight and acceptance as if Misty gave birth to him. She was very excited to have a kitten to care for again." 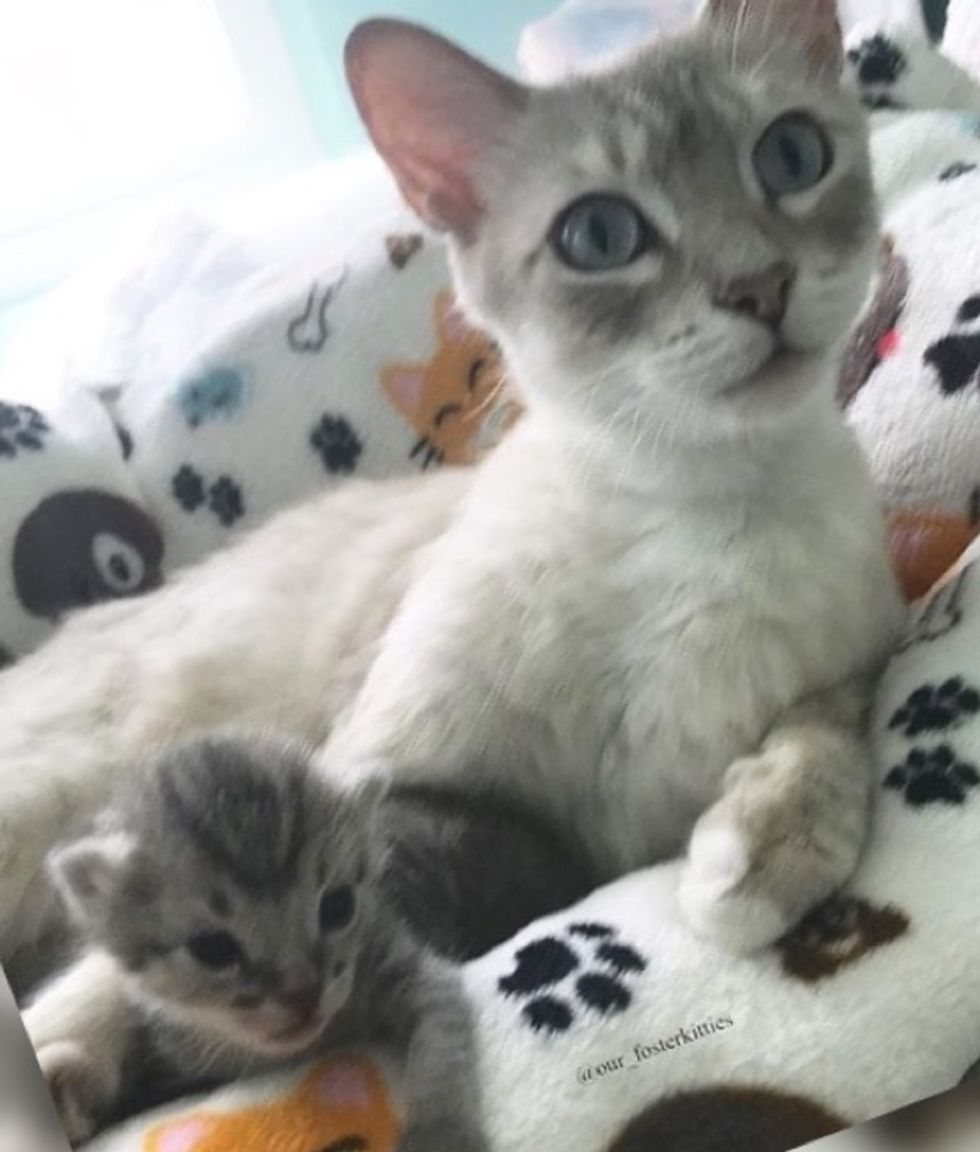 The little tabby began to thrive with Mama Misty by his side every step of the way. He was eating like a champ and growing by leaps and bounds. It didn't take long for him to figure out how to purr. He would keep his purr motor running while snuggling with Mama Misty.

Two weeks later, the kitten reached the half-pound mark and had a healthy, round belly to show off. He was a content, happy baby, constantly filling the room with his loud purrs. 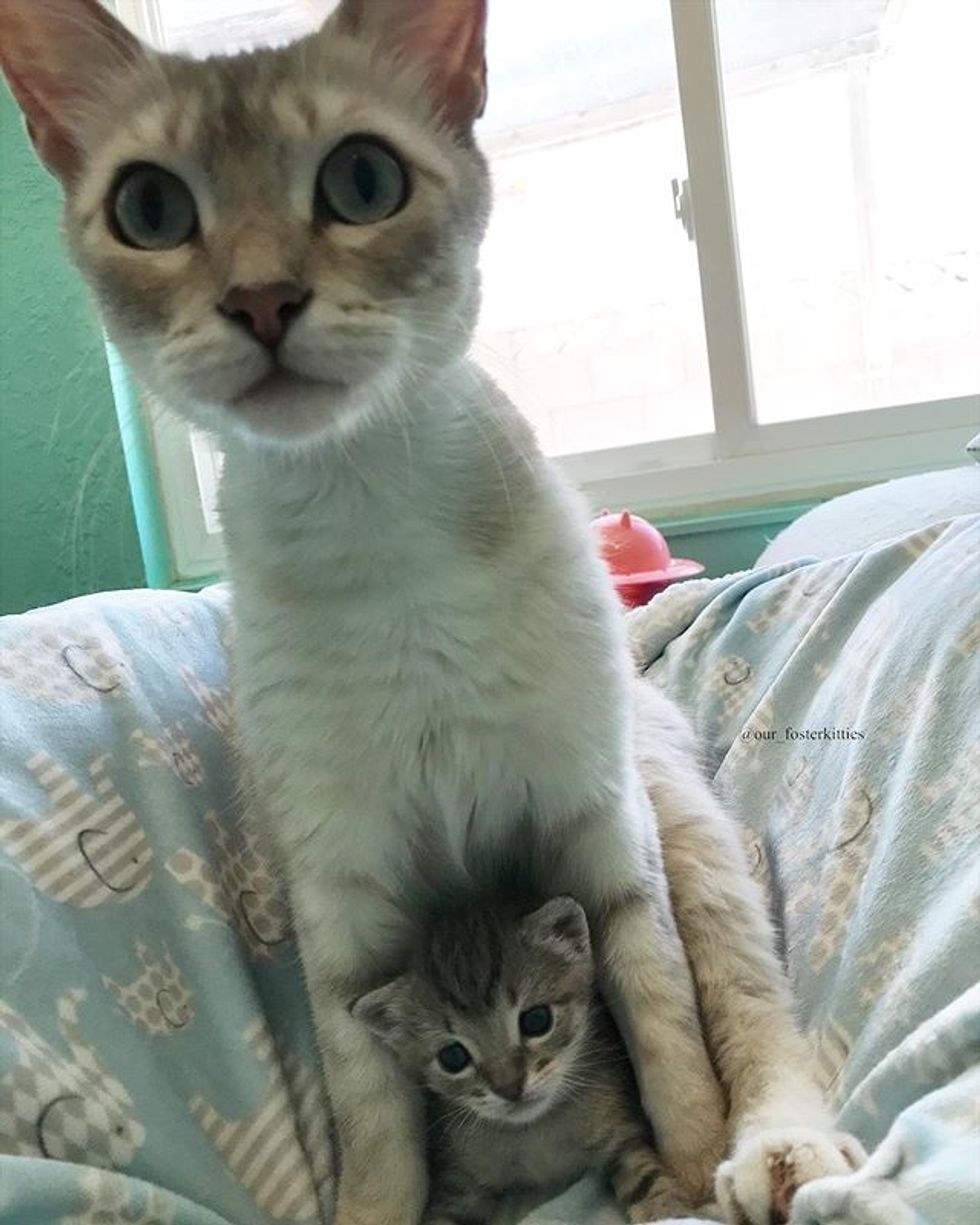 Misty taught her beloved fur child many feline skills. She showed him how to eat like a big kitty and the way to perfect self-hygiene. She was preparing him to be an independent cat.

At one month old, Sunny officially weighed in at one pound and was starting to eat from a dish on his own. 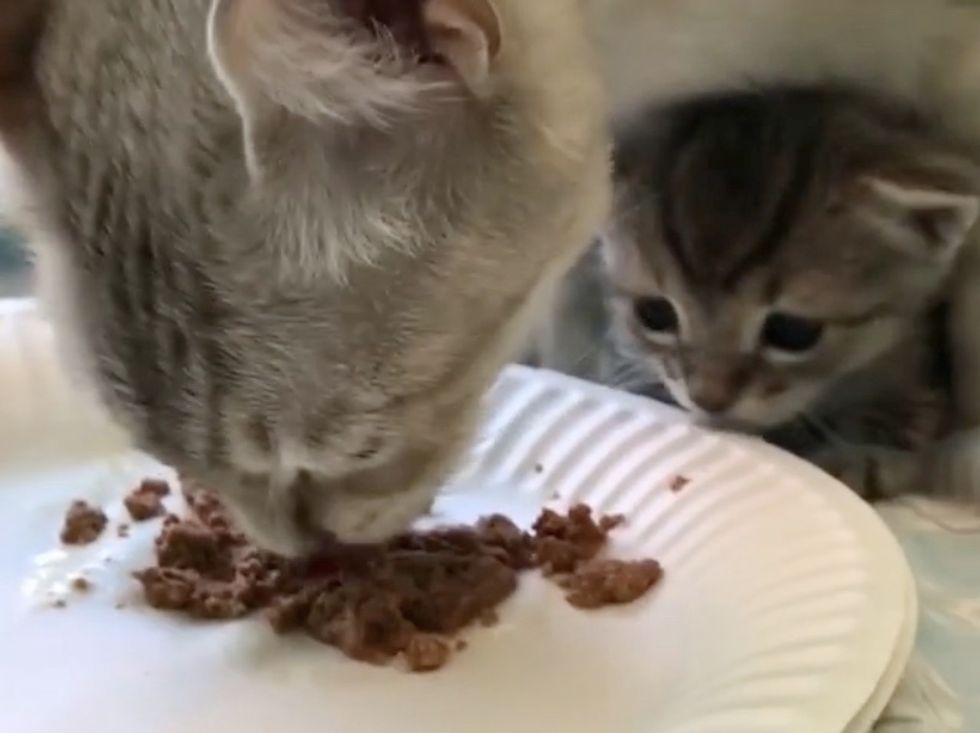 Misty was so proud of how far he had come, and began to spend more me-time to relax and unwind.

Watch Misty and Sunny in this cute video:

Misty the cat and Sunny the kitten www.youtube.com

Misty had been battling with stress related issues (over grooming herself and the kitten) since the birth of her own litter. Despite it all, she insisted on caring for the orphaned kitten as it brought her a sense of comfort.

Now that Sunny is bigger and more independent, Mama Misty is ready to let him spread his wings as she craves more time with people and is ready to find a place of her own. 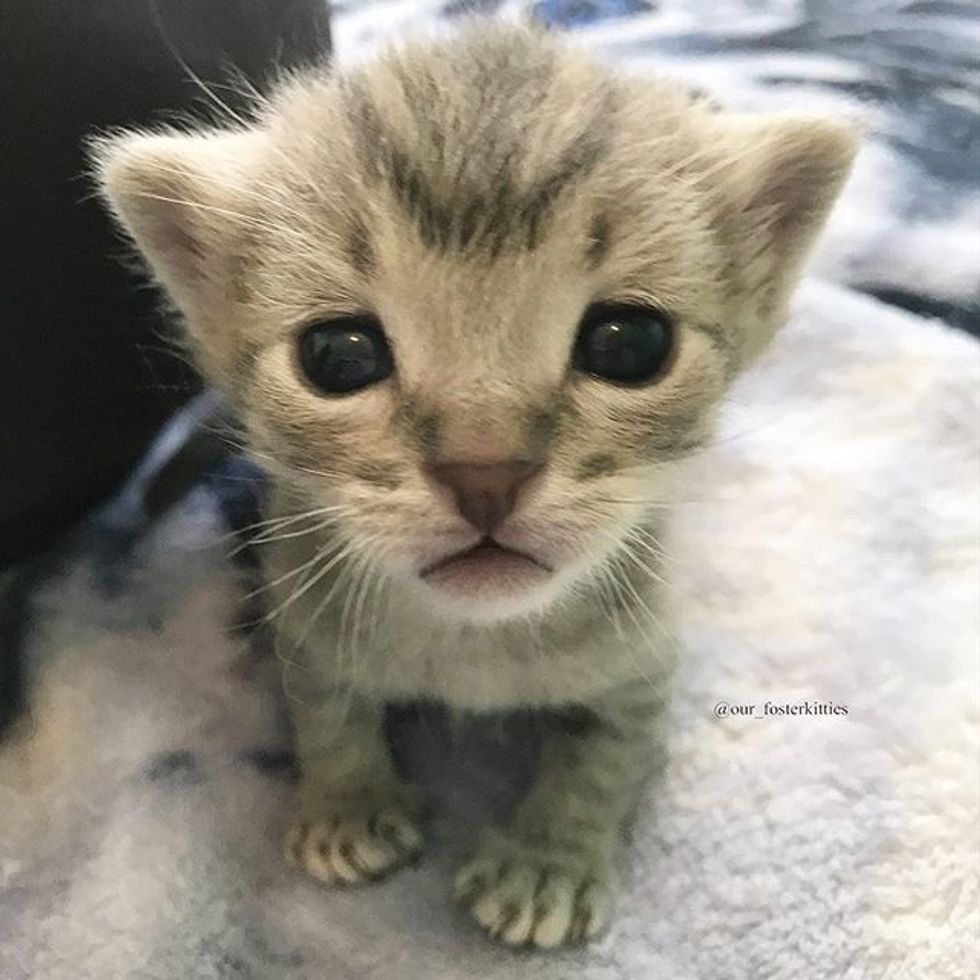 To help her reduce stress, she has been spayed and retired from motherhood. She is looking for a loving, forever family to spend her life with.

"Misty is a very sweet cat and was a great surrogate mom to Sunny. It is time for her to live her life as a precious princess that she deserves to be," Kathy said. 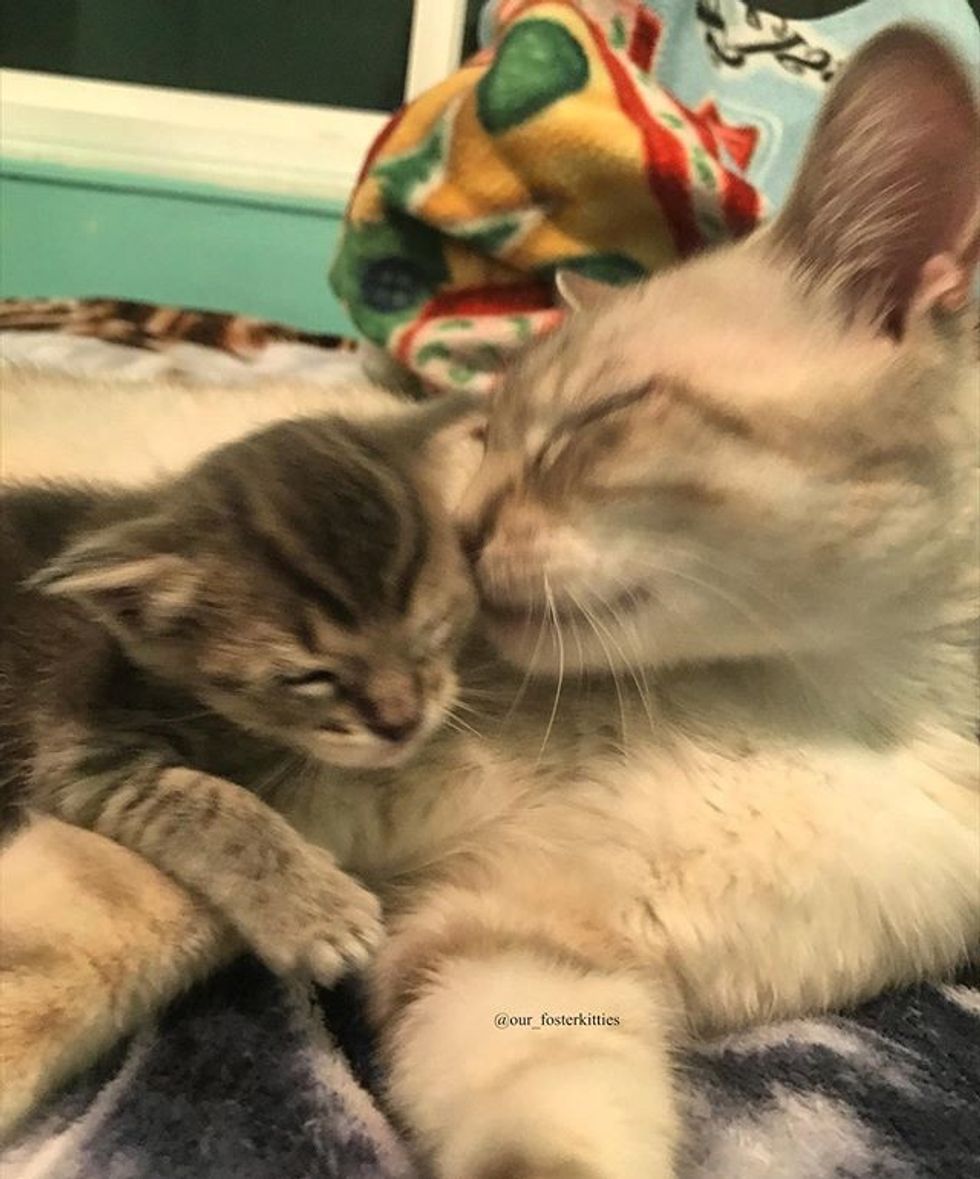 The tabby boy has adjusted very well and is blossoming into a playful, rambunctious kitty. He has figured out how to escape his play pen and can use the litter box like a champ, and he tells his foster mom all about it.

"I'm so proud of Sunny. He is getting more playful every day." 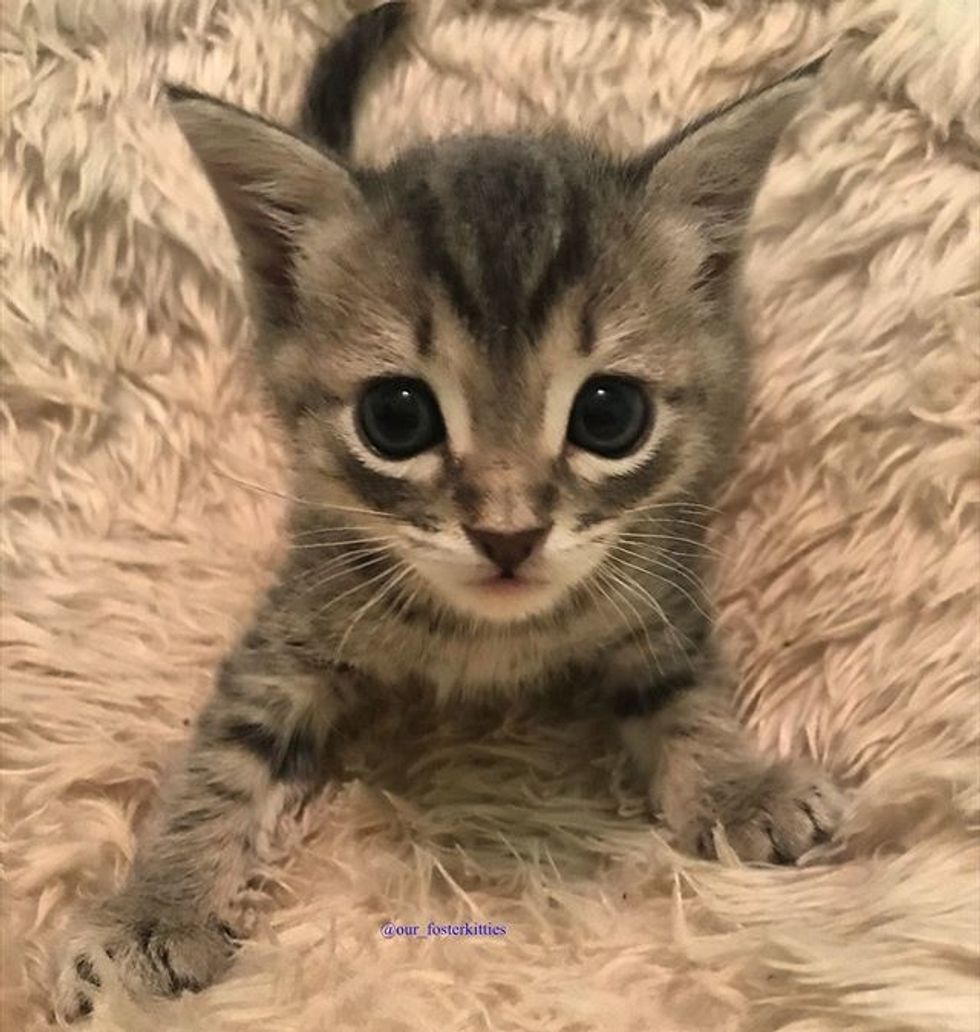