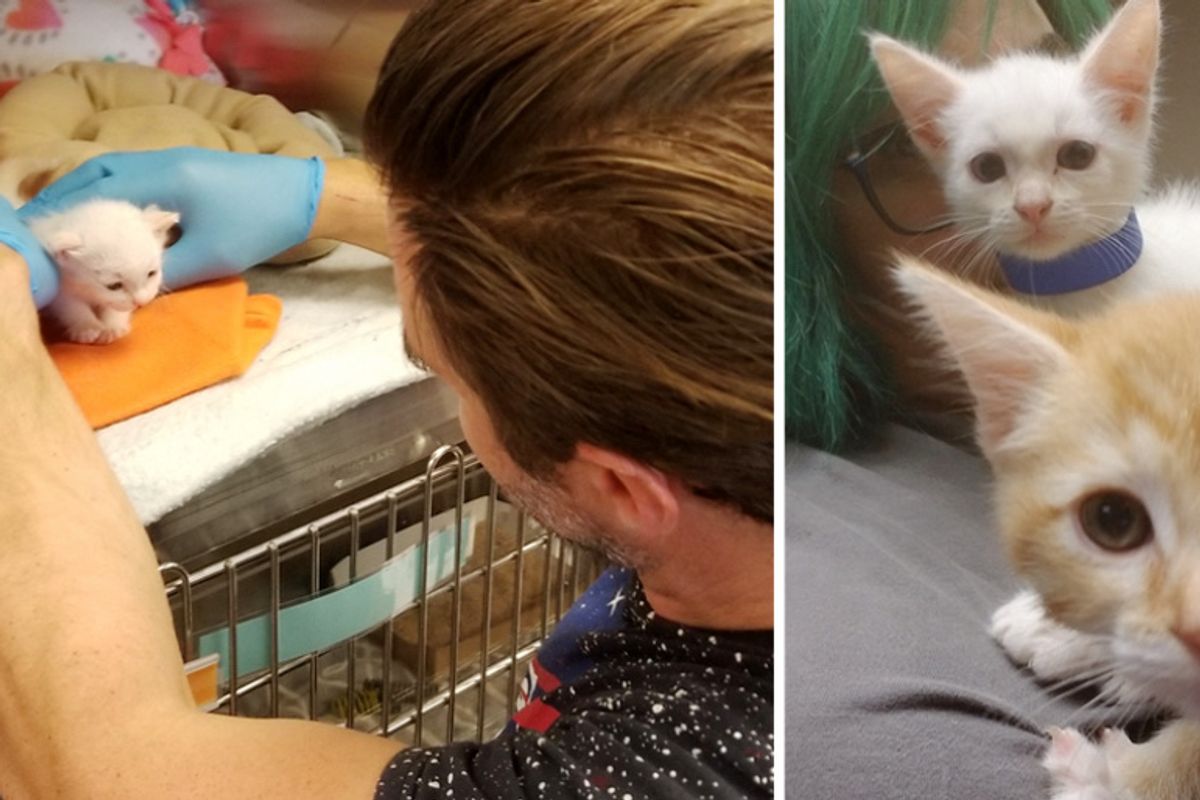 Cameron Bender from Los Angeles found a little lifeless kitten outside his garage and made it a mission to save him.

A stray cat with a small white kitten had been spotted wandering near Cameron's house days before. "My roommate, Corey, and I were cleaning out our garage, prepping to move houses," Cameron told Love Meow. "While I was doing something in the back, Corey said he saw the white kitten."

But this time, the kitten was in poor shape and barely hanging on. Cameron noticed some wounds around his neck and immediately checked to see if he was breathing. "For some reason, I blew air on him, and he stirred."

He rushed the kitten to the vet, where they discovered four puncture wounds around his neck. After cleaning and treating them, Cameron kept the kitten warm while trying to figure out what he could do to ensure his survival.

Knowing he would need help, he headed straight to the shelter. "I worried every time I looked down at him, he wouldn't be moving. But I would gently stroke him and he would stir. I figured if he kept fighting, I would try to give him his best shot."

Shelter staff were able to connect him with Best Friends Animal Society in Los Angeles shortly after he arrived. Wasting no time, Cameron volunteered to transport the kitten.

"That was the longest drive in my life, during rush hour, worried that I was just going to take too long," he told Love Meow. "But we made it. He made it!"

He handed the kitten over to Courtney Bean, a Cat Caregiver at Best Friends. "The wonderful nurse Courtney took him into the back. I started weeping from the stress of the day, but he was in the spot where he'd get his best chance at survival," Cameron said.

It appeared that the kitten had bite marks in his neck and back, but they were small resembling those of an adult cat's according to Best Friends. The injuries had paralyzed the kitten temporarily from the neck down.

Courtney placed him in an incubator, which provides environmental heat support and oxygen therapy. "He was unresponsive completely besides an occasional meow while we handled him. He didn't even react to his injuries," Courtney told Love Meow.

Despite the rough beginning, the kitten never gave up and came back from the brink. "He accepted food and medications as if he was grateful to receive them. Every time I would massage his limbs, it really seemed to help but also he wanted to try doing it on his own," Courtney said.

"He had such a strong will that he very quickly began pulling himself around on one arm, and then two, and so on until he was able to move himself around his incubator, despite doctors' orders."

Caregivers were asked to turn the kitten over every hour, but the kitty started doing it on his own just hours after arrival.

"I gave him several pep talks, telling him how much better he would get soon and how he was safe with us at Best Friends," Courtney added. "I would comb him at every feeding, at which he was always eager to drink milk from the bottle."

Cameron came back to check on his little friend later that day and was overjoyed to see him up on his paws. Staff named the kitten Kameron inspired by his rescuer.

Cameron returned the next day, and the day after to spend time with his buddy. When he came back a few days later, he brought another feline friend with him.

"I found his brother and they were quickly reunited," Cameron told Love Meow.

His brother, Zidane, was found in the same place as Kameron. As soon as they were placed together, the two started playing and snuggling with each other. They spent a lot of time hopping in the box forts staff built for them and cuddling in their caregivers' laps, soaking up the love.

Kameron the kitten and his rescue journey youtu.be

"Both Kameron and Zidane, once well enough, left the nursery to a foster volunteer who raised them up right and got some good weight on their bones," Courtney told Love Meow.

When they were big enough, they returned to Best Friends to be neutered. Now, the two brothers are ready for the next chapter of life - a forever home!

Cameron made it his mission to save the little white kitten that day. He then came back and reunited him with his brother.

"We knew he cared so much about this precious kitten that he didn't even know. Those are the exact type of people that we adore in the animal rescue world," Courtney told Love Meow.