A tabby kitten insisted on sitting on a warm lap, watching her people, and wouldn't leave their side. 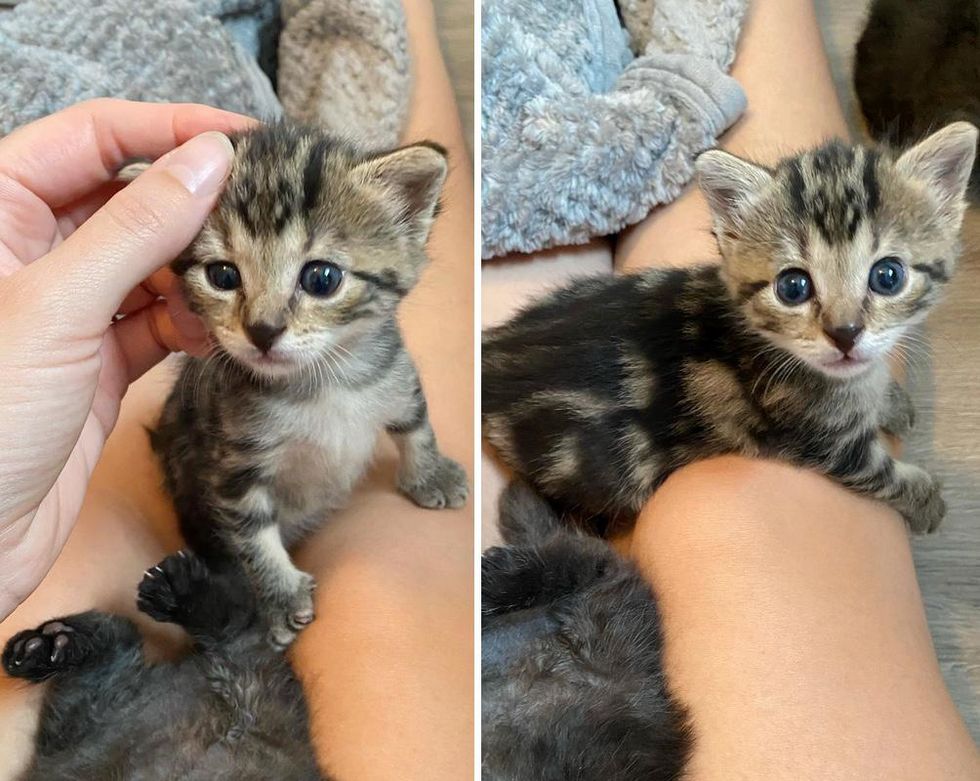 A litter of five newborn kittens were brought to Animal Welfare League of Arlington in Virginia after they were found outside without a mom. Penny Richards, a foster volunteer of the rescue, didn't hesitate to take them in.

The kittens, about two days old, still had their umbilical cords attached. They were just pint-sized and constantly seeking heat and comfort. Penny set them up in a cozy nest with heated blankets, a cuddle toy and started feeding them around the clock.

Without the presence of a mom, the kittens began suckling on each other, which can be dangerous and damaging. They wore tiny protective onesies for the first week until they grew out of the habit. 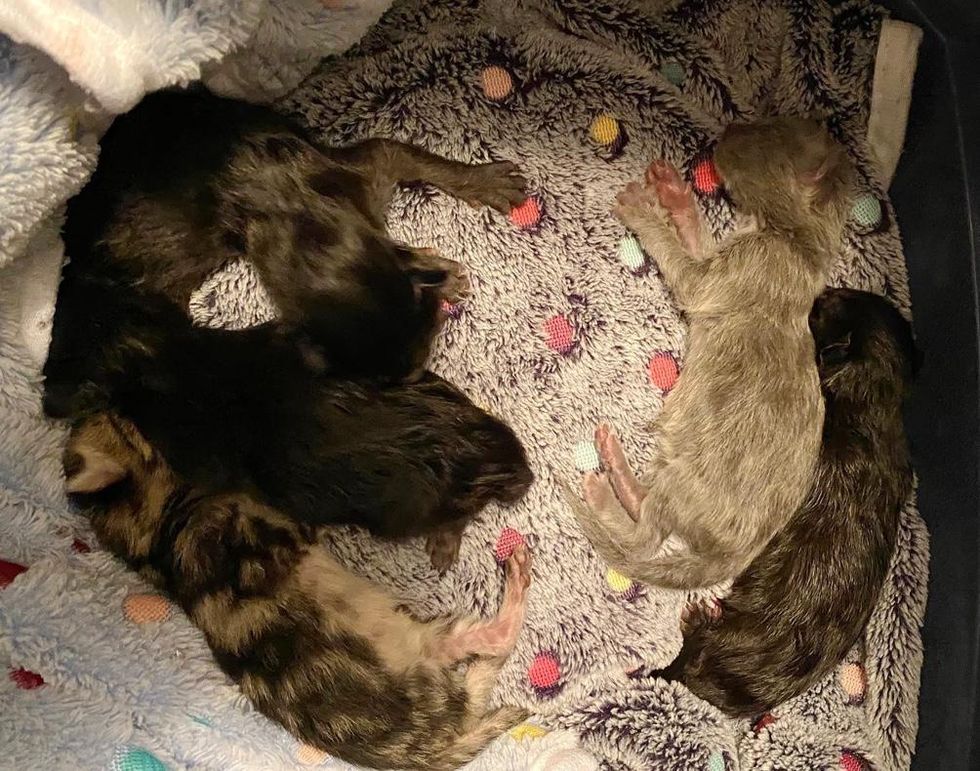 The runt of the kitten, Piccadilly or Dilly, stood out at a young age. She was the smallest of the bunch and a dainty little eater. Penny had to put in extra effort to encourage her to eat.

"I always started the feeds with her because she was the noisiest, and then went back and offered her more when everyone else was done." 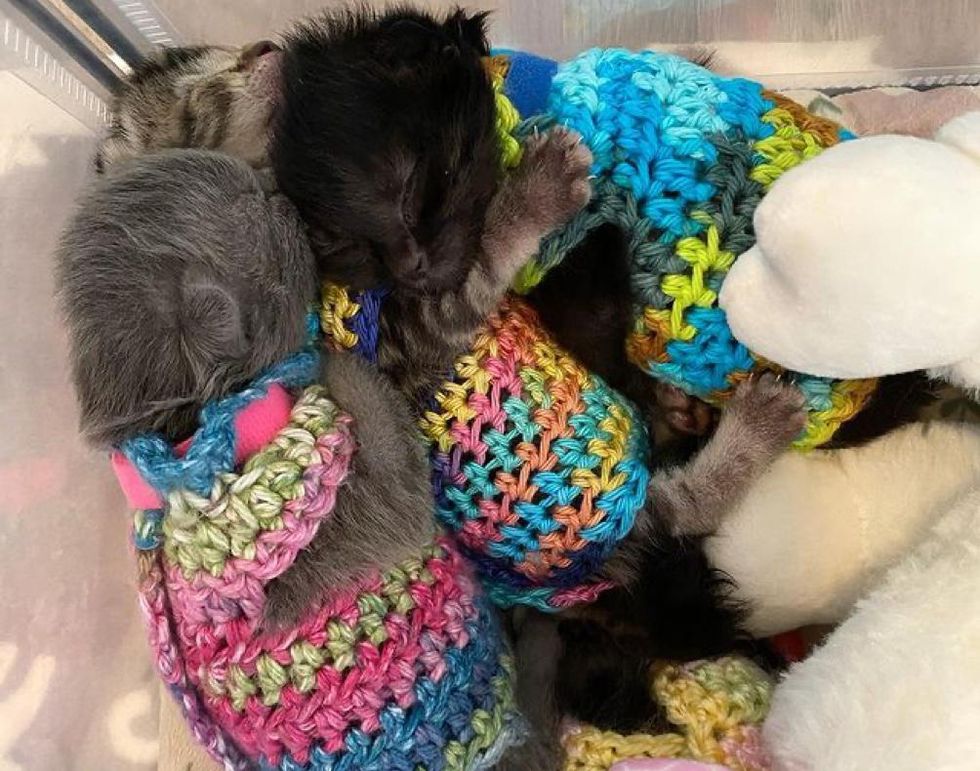 Dilly was the last one to open her eyes. She gravitated towards her humans as soon as she took her first peek into the world. "She loves people. When she was tiny and developed her sight, she would just sit and watch everyone around her," Penny told Love Meow.

The little bundle of fur was already full of character. "She was noisy when awake, but when asleep she was always in such funny positions. She could be found snuggling with her lamb (cuddle toy) more often than not, even on top of it." 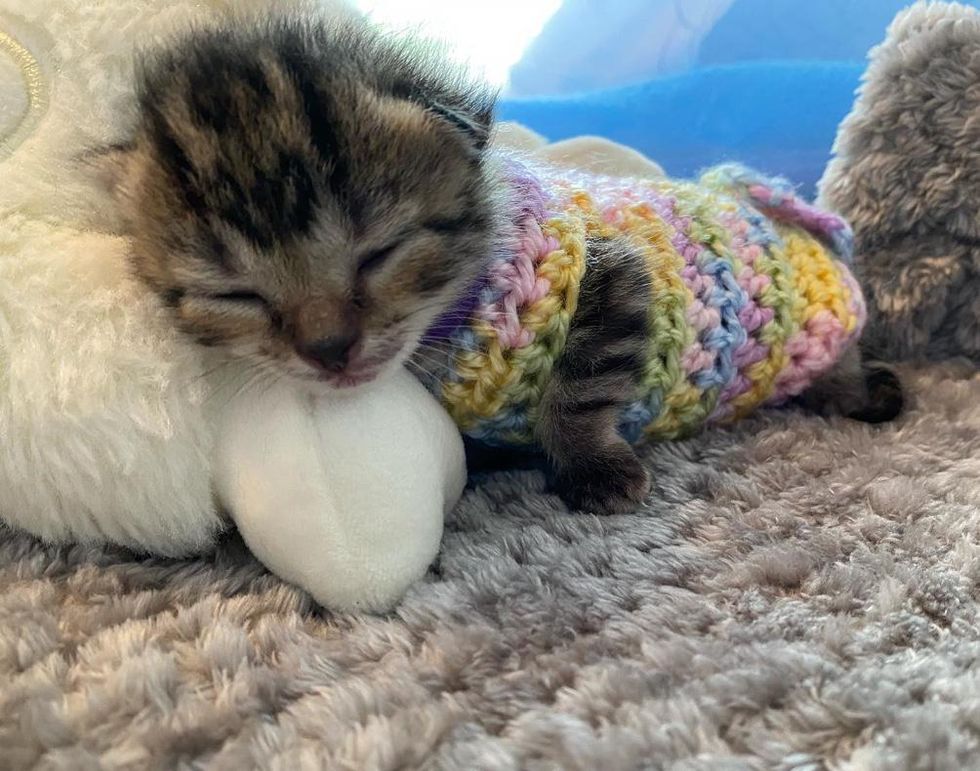 The tabby girl was not shy of voicing her many opinions. She was tiny but had a mighty personality to make up for. "She found her voice early, and she's not afraid to tell you what she thinks."

At three weeks old, Dilly and her siblings began to find their footing by waddling about. In no time, they started to wrestle with each other in slow motion. 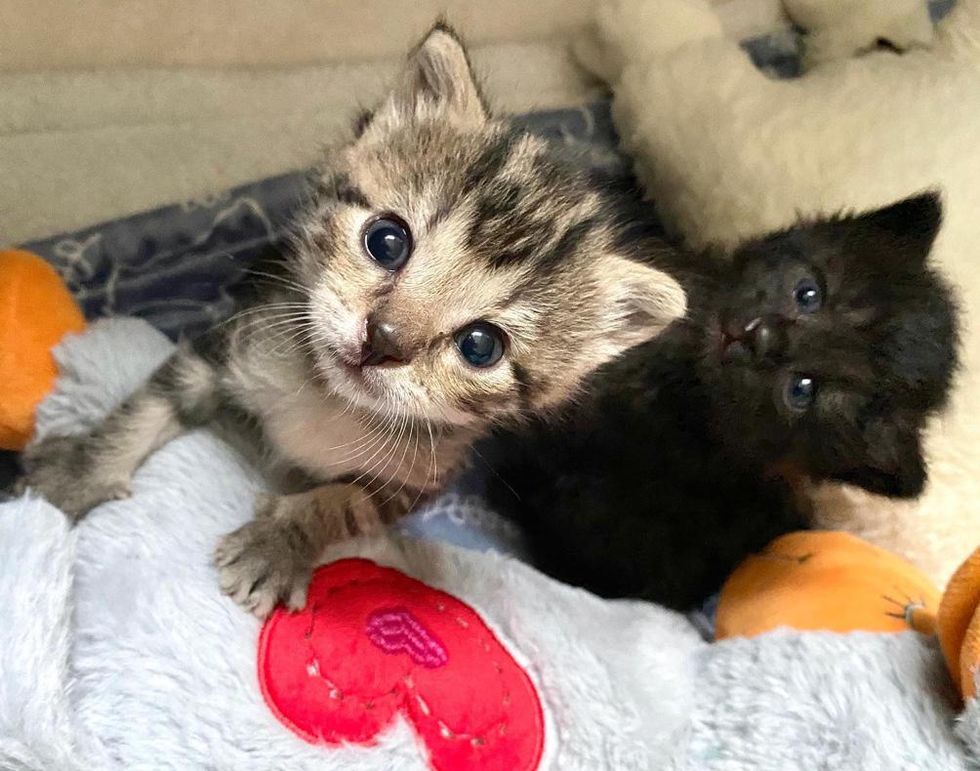 As Dilly got bigger and more energetic, her sassy attitude came out in full swing. When she discovered fuzzy ball toys, she was one of the first to check them out, hitting them back and forth in the playpen.

Once the tabby simmered down from her crazy bursts of play, she always came running to her foster mom and fell asleep on her lap. 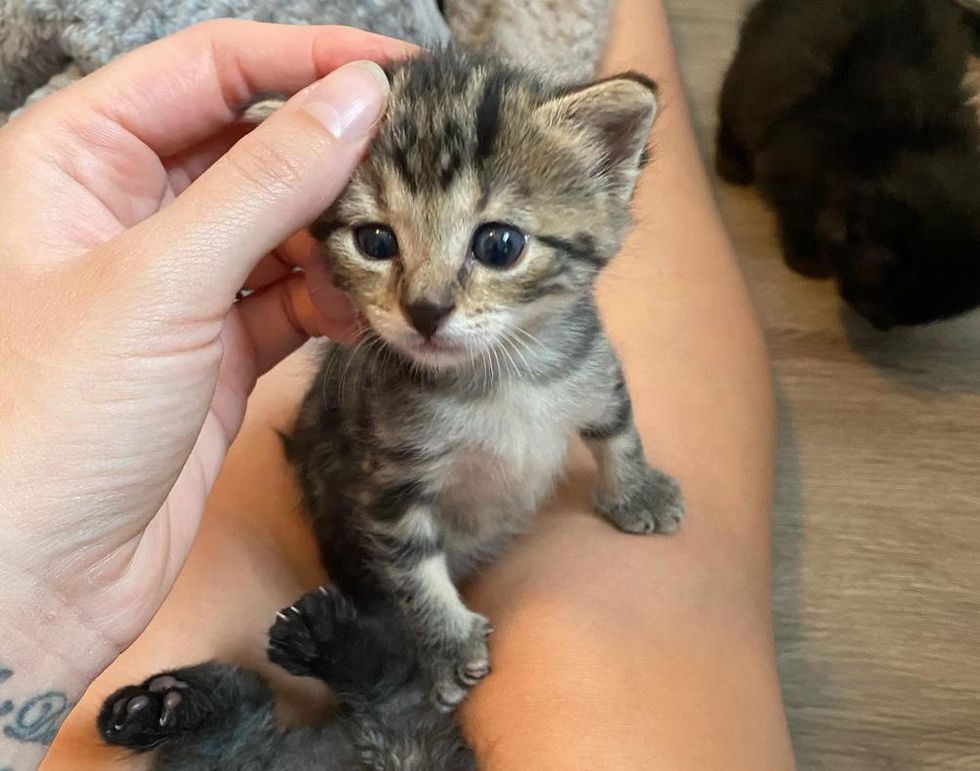 "She was very cuddly, and always climbed onto my lap for snuggles, while purring away," Penny shared with Love Meow.

Dilly continued to hog her foster mom's lap every day. She attentively watched her with those big doe eyes, as if to study everything her human did. 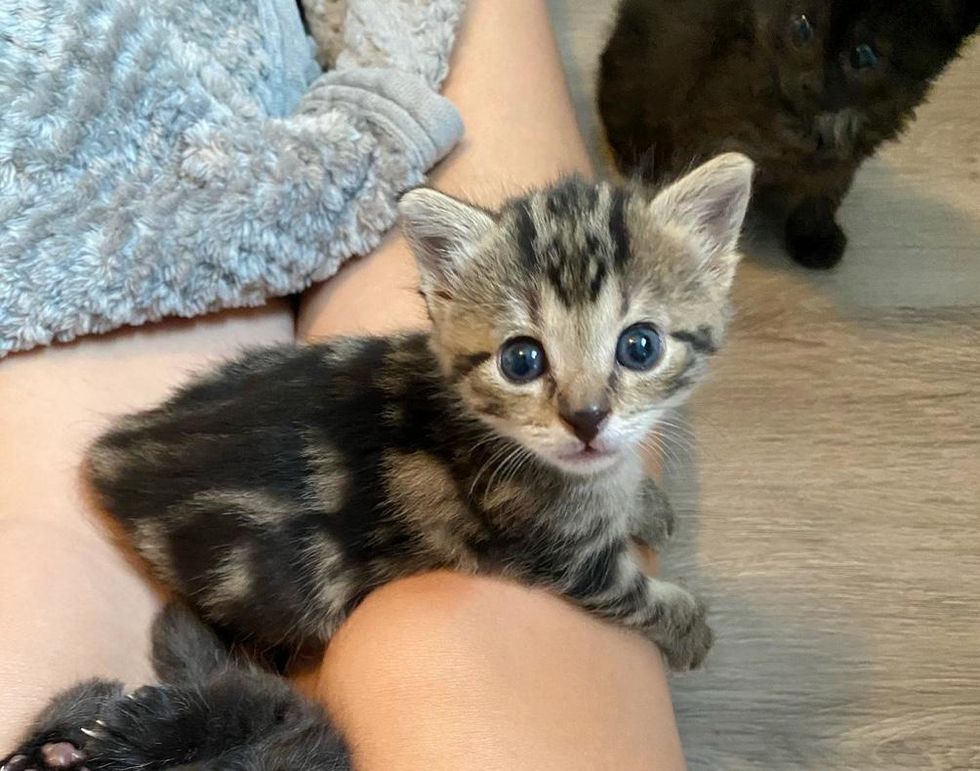 "When they came in at two days old, she weighed quite a bit less than the others."

Nine weeks later, she was still the smallest of the litter, but not so tiny any more. The playful, rambunctious tabby was constantly on the lookout for trouble, plotting antics around the house. 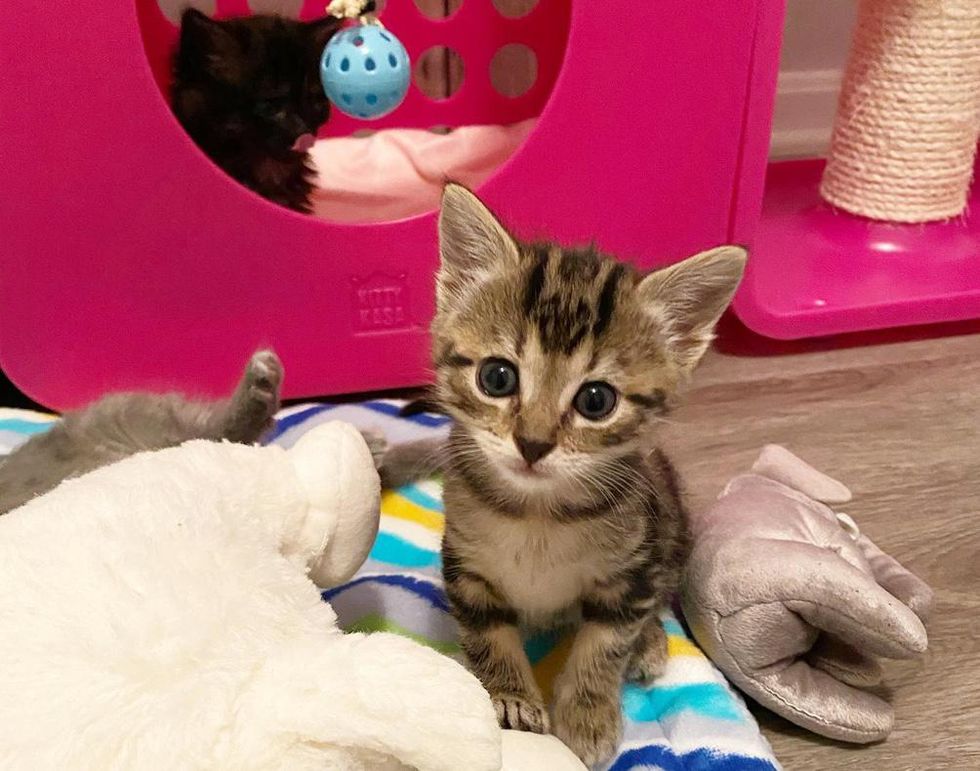 When she needed to recharge, she made her way onto the nearest warm lap and curled up for a nap. "She's always been a sleep twitcher, and sometimes she sleeps with her eyes open."

"Piccadilly has been a joy to have around! From day one she has had the biggest personality crammed into the tiniest body." 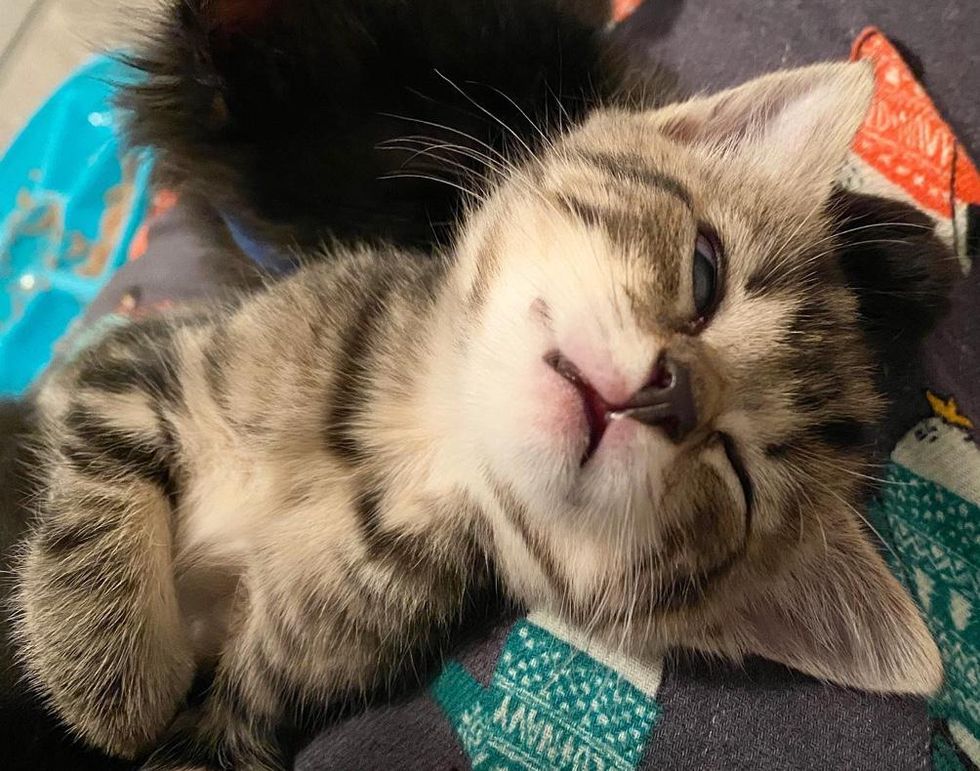 "When her eyes opened and her sight came in, she would just sit and stare at me, watching everything I was doing and taking it all in," Penny said.

"She has been bold and loud, and so entertaining, but little Dilly has the sweetest side to her. She always came for cuddles on my lap, and loved to sleep up against me." 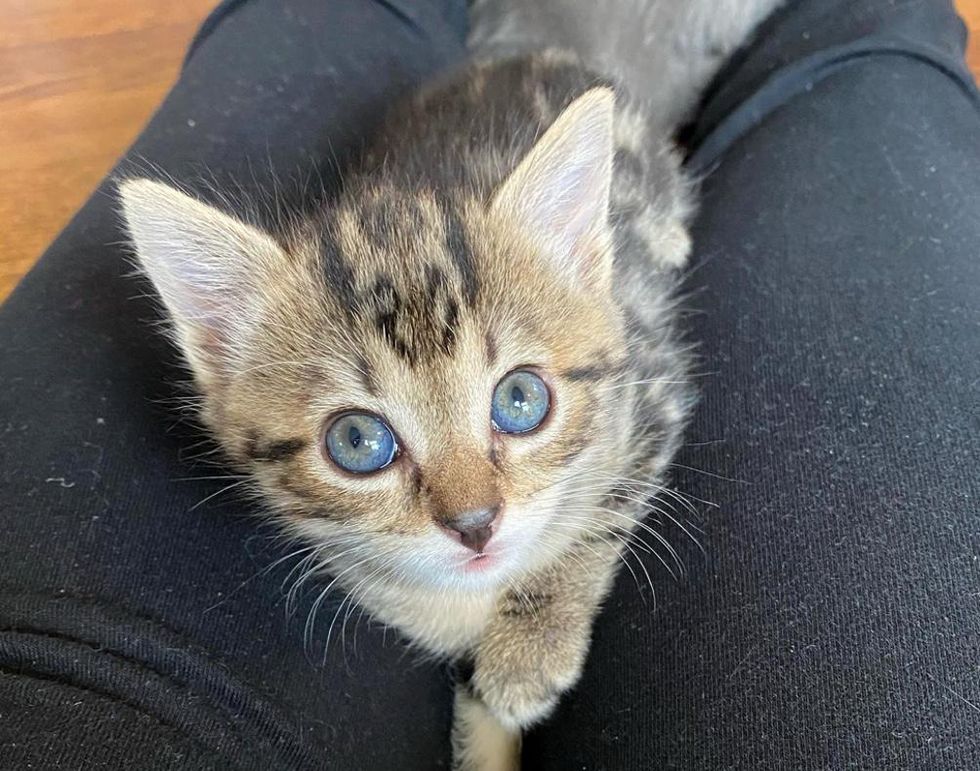 "She never stopped purring, and as soon as I called her name she came running over."

When the kittens were big enough for adoption, they quickly found their forever homes. Dilly the tabby girl also met the family of her dreams. 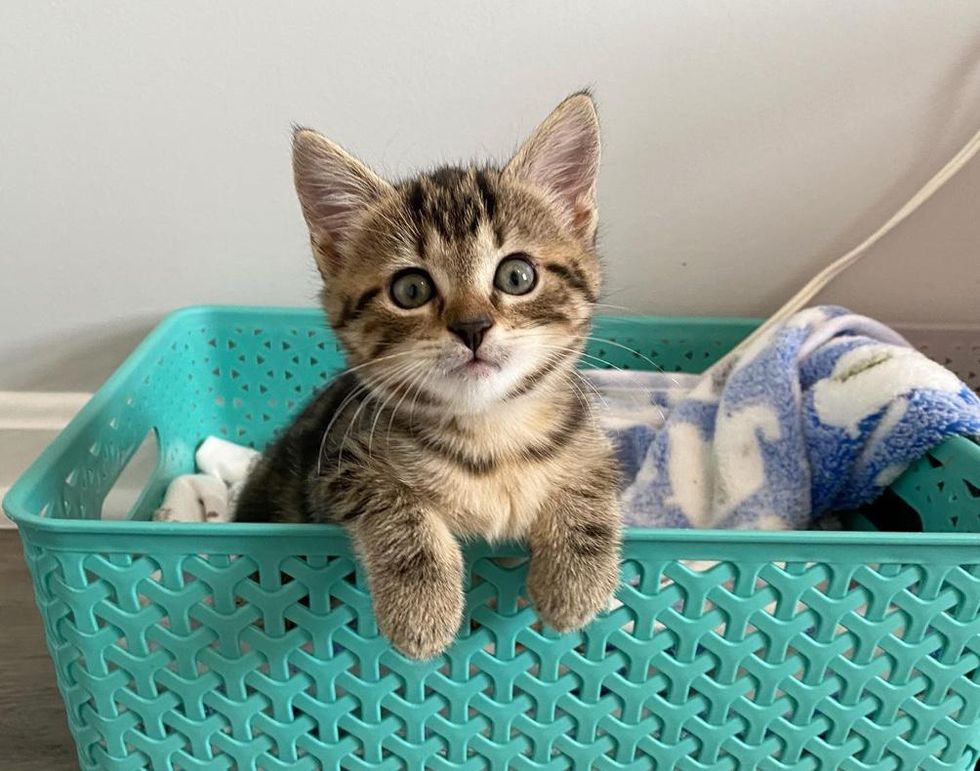 After a few days, Dilly won over her new feline sister Ronan who took the little one under her wing.

Dilly the mischief-maker likes to play with Ronan's tail and follow her everywhere around the house. She watches her big sister and tries to imitate everything she does. When they are not wrestling or sleeping, they are probably watching the day go by through the window next to each other. 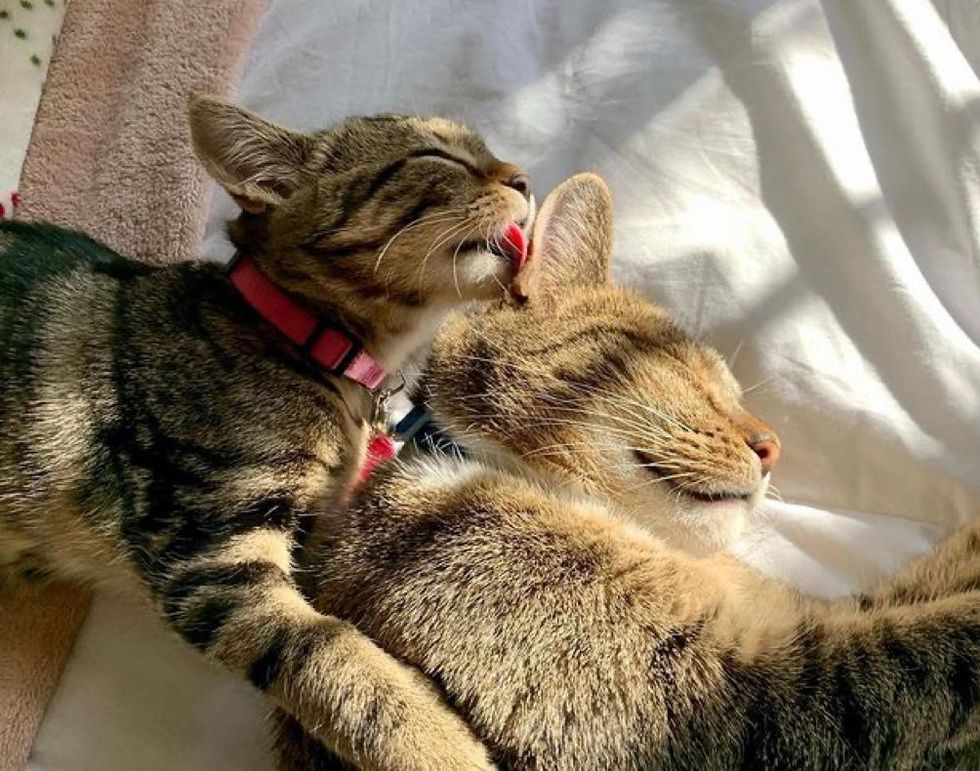 "Dilly is getting so big. She's five months old and 5.3 pounds. She spends a lot of her day running around, bugging her sister, and watching the humidifier. She loves climbing on the headboard, snuggling with me under the covers… She makes me laugh constantly with her silly antics," Shira, Dilly's forever human, wrote. 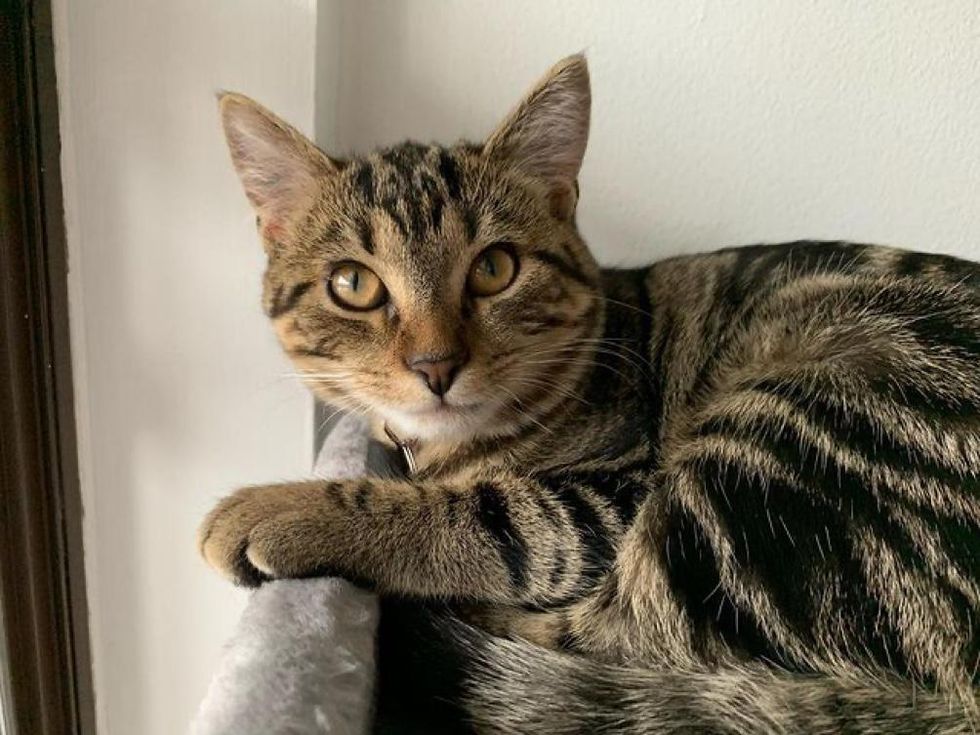