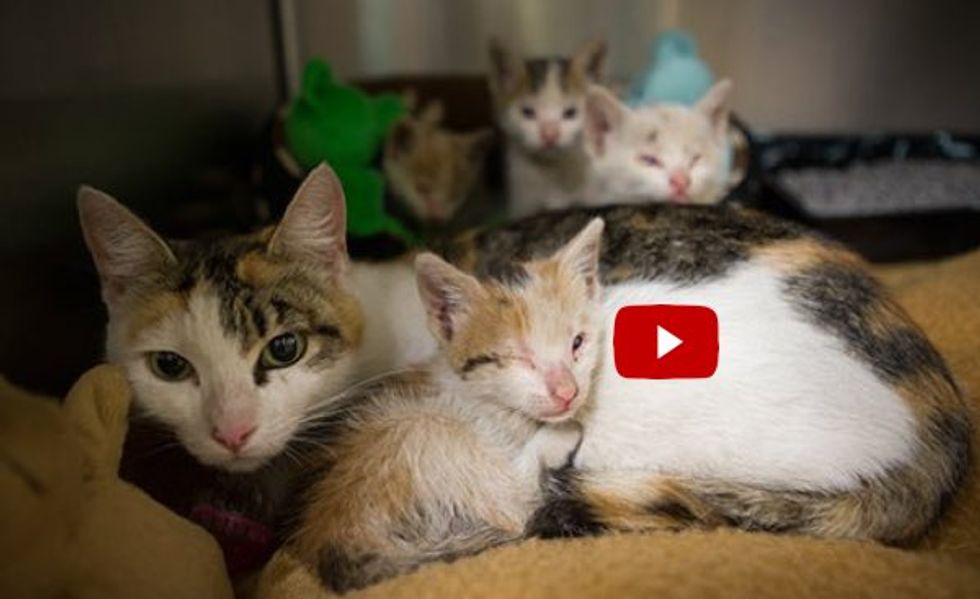 A litter of tiny kittens were rescued by a team of rescuers who refused to leave anyone behind.

Edgar’s Mission wrote this beautiful story on their website:

"Earlier today we received a call from a factory worker to advise that kittens had been found abandoned at an industrial warehouse. Seeking refuge in a metal carryall, the tiny waifs lay huddled, not knowing that danger lurked just moments away. With a call for the carryall ordered, the distressed worker didn’t wish to move the piece of machinery, knowing full well that if they did the kittens would perish.

We had but a short window of opportunity to try and save the kittens and stave off the forklift that would surely crush them. Although our efforts were not quick, we had both the patience of the worker and luck on our side and four tiny kittens were eventually pulled one by perilous one from the tiny holes in the carry all. But despite our successful rescue, it was with heavy hearts that we left, as no mother cat was in sight.

However no sooner had our Kindness Van touched down at Edgar’s Mission, delivering its very special cargo, than we received another call from the factory worker to say that a mother cat had been spotted in the same area the kittens were found. Once again our rescue team was dispatched, hoping that our hour long journey would not see us arriving too late. After scaling fences and hiding in bushes, a mother cat was soon sighted, a trap set and with bated breath our rescuers waited… and waited… and waited.

The rest is one of the most wonderful rescue stories of the year."

A litter of tiny kittens were rescued from a industrial warehouse.

The kittens found refuge in a metal carryall. The worker who found the kittens immediately called Edgar’s Mission for help. They successfully rescued 4 tiny ones, but the mama cat was nowhere to be found.

Soon they received another call from the factory worker who spotted the cat mama in the area where the kittens were found. They dispatched their rescue team. With a lot of patience, they found the cat mama and safely brought her to the shelter, reunited her with her kittens.

It was a really happy reunion.

WATCH VIDEO: Cat mama and kittens are finally back together!