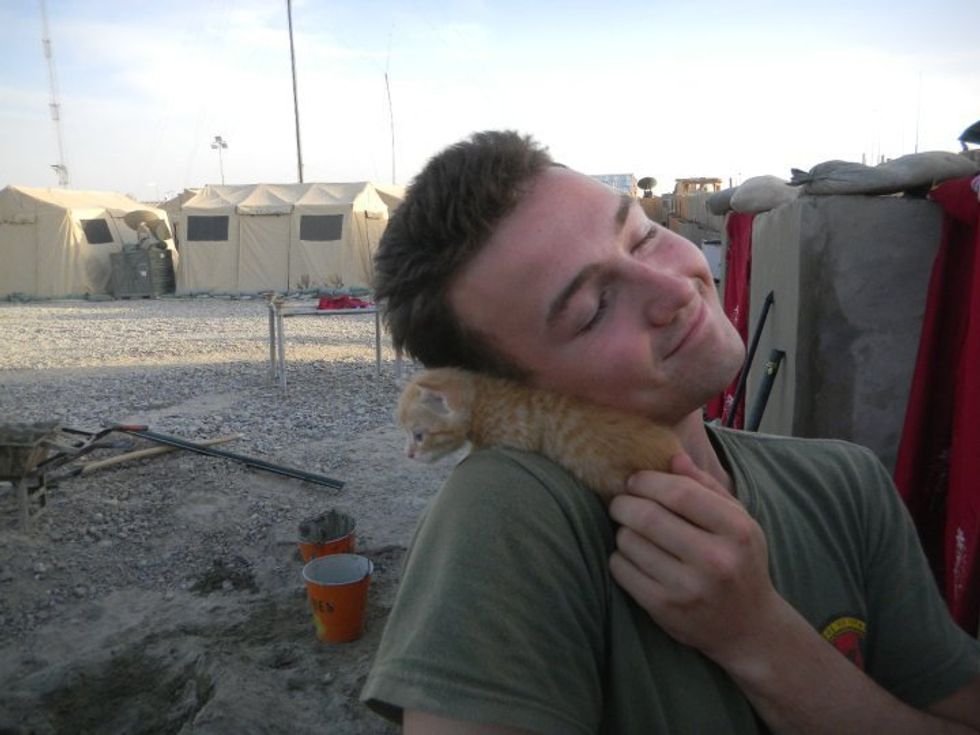 Kitties Rescued by US Marines in Afghanistan

In Afghanistan, in the midst of war, many animals are lost and separated from their family. Many are found later by troops from the US, UK and Canada. Soldiers rescue these animals and get help from rescue groups that help them send these animals out of the country and to a forever loving home that they deserve.

Three US marine soldiers, Brian Chambers, Chris Berry and Aaron Shaw, started a mission to help bring home the kittens they have befriended while serving in Afghanistan (Facebook group). With generous donations from cat lovers and help from Noward Dogs animal rescue, Kiki and Keykey, two lovely ginger kitties, have successfully made it home in the US. Unfortunately 2 other cats, Simba and Ra-Ko, lost the battle against their illnesses a few weeks ago.

Kiki and his sister Bones were found by Brian Chambers, a US marine.

"At only 3 weeks old, their mother had disappeared and they were left alone to live rough and fend for themselves like the other cats in this area. We looked after them both and they lived in a box in the office, after a week they were allowed to roam around during the day and sleep with us in the hooch at night."

Unfortunately Bones vanished a week after along with Kiki, but Kiki eventually returned.

Kiki was injured badly on Monday 8th of March. Brian found him in horrible condition. "He was too frightened to approach me, I ran to find some wipes to clean him and I then realised how bad this wounds really were..."

A vet came the next day and put Kiki on a course of antibiotics. Today Kiki has fully recovered.

"Kiki is a very playful adventurous cat, he loves to explore and is very curious, he enjoys sitting on my shoulder, chewing on my hand and running up my legs. He hasn't been put off by what has happened to him."

Keykey was found by another US marine named Chris Berry.

"I found Keykey tangled up in c-wire one day in the beginning of the deployment, I took him in and fixed his wounds. He was also extremely malnourished so I constantly kept an eye on him and fed him until he got back to good health and he has been by my side ever since."

Both Keykey and Kiki have arrived in the US. Kiki is currently living with Brian's parents in Houston, Texas until he leaves the Marines and moves home. Keykey is living with Chris' parents in Detroit, Michigan and enjoying his new family.

For soldiers who are on duty overseas, often time the only chance they get to cuddle is when they meet these stray animals. These soldiers are lonely and longing for love from their family and friends. The kitties are abandoned, lost and have nowhere to call home. When they find each other, they become best friends.