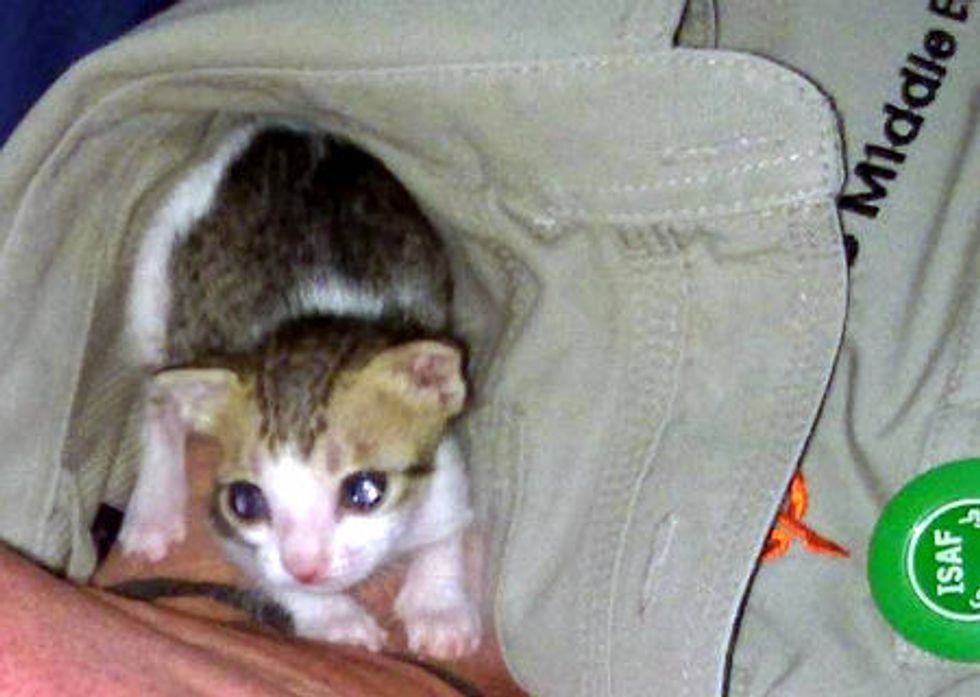 A tiny kitten (named IL76) started her life in Dubai and somehow strayed onto a flight en route to Afghanistan when she was just 10 days old. With help from the flight crew and a rescue group, this kitty eventually found a forever loving home in the US.

IL76 story is an unusual one to say the least. IL76 started her life in Dubai and at around 10 days old she stowed away on a flight from Dubai to Afghanistan!

The crew that were unloading the cargo from the plane got a real shock when they came across a tiny kitten of around 10 days old but they immediately took her in and started to care for her.

At that age it is difficult to feed and keep alive a kitten in a country where you have access to replacement milk and vets but in Afghanistan this would normally be pretty much impossible to do! Despite this the crew that found her persevered and made a bottle for her and started feeding her with cows milk and to everyone’s surprise she responded well and day by day she grew stronger.

She eventually earned the name of IL76 after the aircraft she stowed away on and her owners soon realized they did not want to leave her behind and asked Nowzad for help. Originally IL76 was destined to be shipped to the Philippines but her owner moved to Papua New Guinea and unfortunately because of the strict quarantine regulations it was proving all but impossible to send her to PNG.

In March 2012 after IL76 had been with us for a year we were able to find her a new forever home in the USA with a lovely lady who had a cat we rescued from Iraq a few years ago. We quickly made arrangements for flights and IL76 flew to America where she found herself a new name, Mickey.

Today, Mickey spends her days playing on the cat condo’s in her new home and getting up to all the things cats do!

IL76 was born in Dubai, but somehow strayed onto a flight to Afghanistan when she was just 10 days old.

The crew was shocked when they found her but immediately took her into their care.

The crew from the cargo flight nursed her back to health.

She eventually earned the name of IL76 after the aircraft she stowed away on.

They asked Nowzad to help their little stowaway. After staying with Nowzad for a year, they finally found her a home in the States.

"Today, (IL76 renamed Mickey), spends her days playing on the cat condo’s in her new home and getting up to all the things cats do!"

Photos by Nowzad, a non-profit charity organization aimed to improve the welfare of the animals of Afghanistan. Follow them on Facebook.