A stray cat showed up at a lumberyard one day and made it his forever home. He's been offering love and cuddles to whoever comes into the door for 12 years. 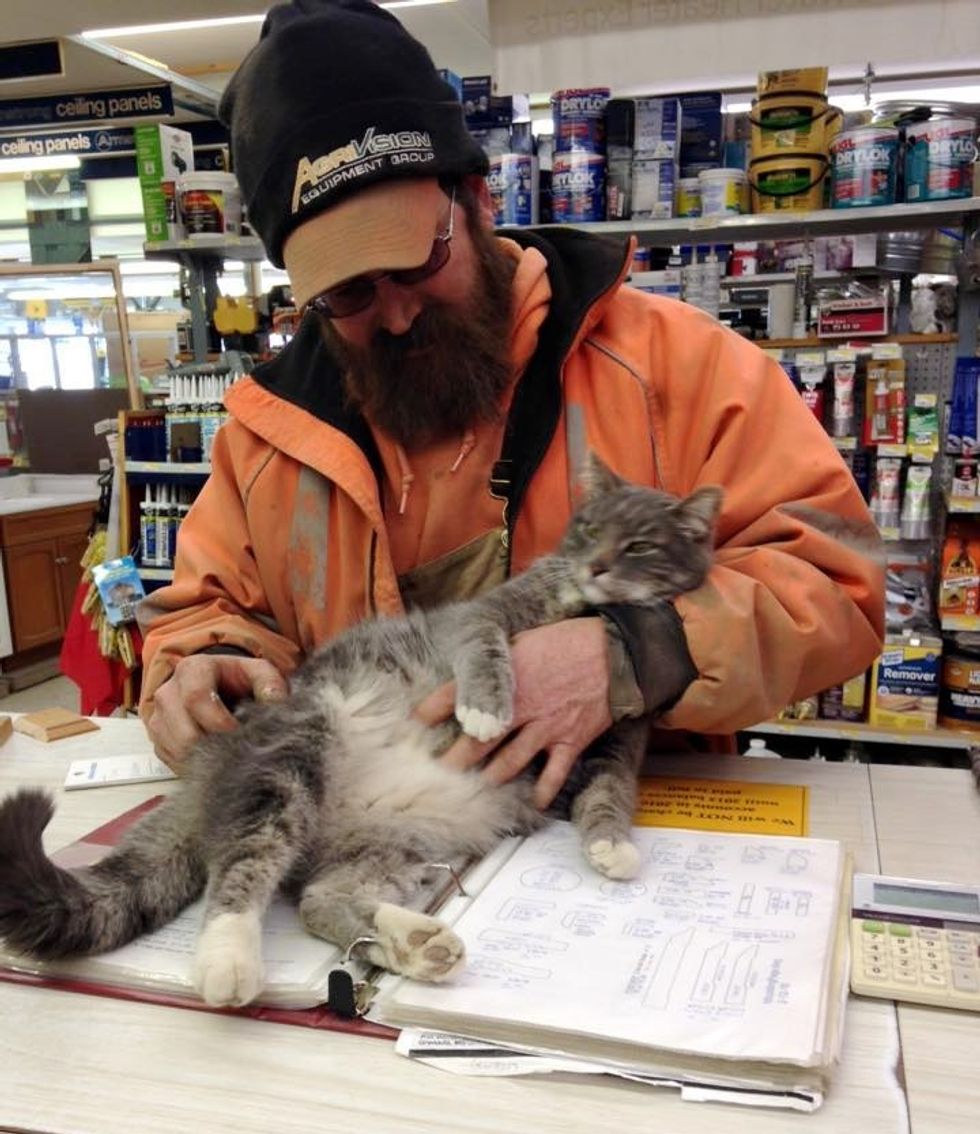 Hoover was found at Burke and Sons Lumber Company in Rock Port, MO. over a decade ago and decided to befriend the people there.

"He was living off crickets and grasshoppers. At first we put the word out that we had a young cat that needed a home, but my mom (this is a family run lumber yard) decided after spending time with him that he was going to stay here," Jesse Kendall told Love Meow.

Hoover greets people with a big smile at the lumberyard. 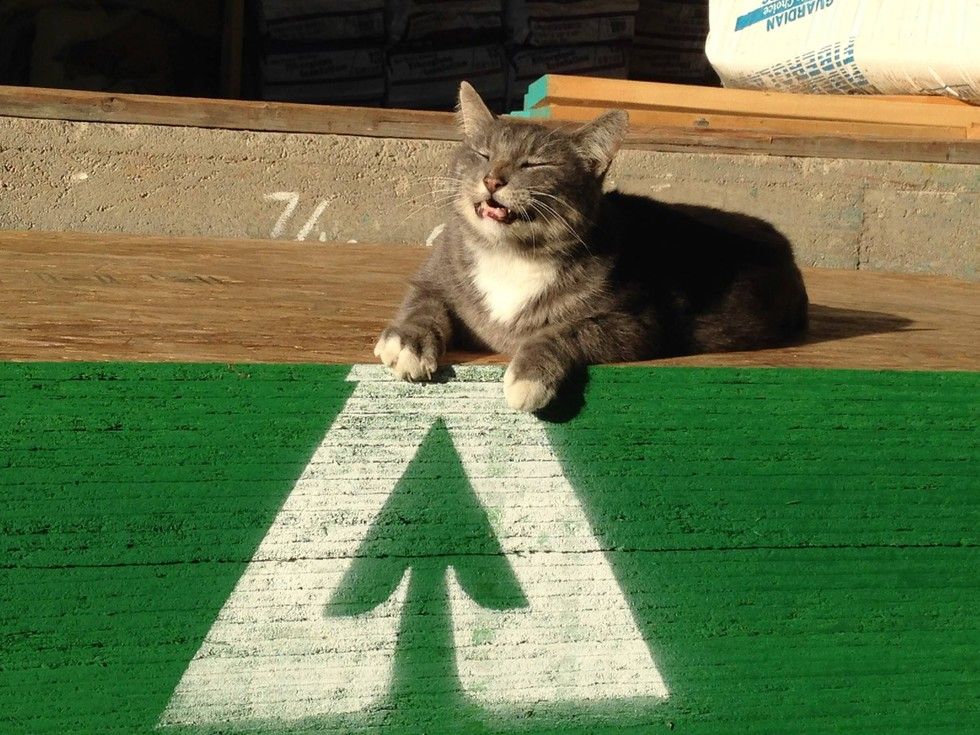 "He is one of the most laid-back cats I've ever seen. He lets children pet him. He likes to be held like a baby. He can usually be found sleeping in a lumber bin, on a desk, or right on the sales counter looking for love from customers," Jesse said.

Hoover oversees the entire operation at the lumberyard. 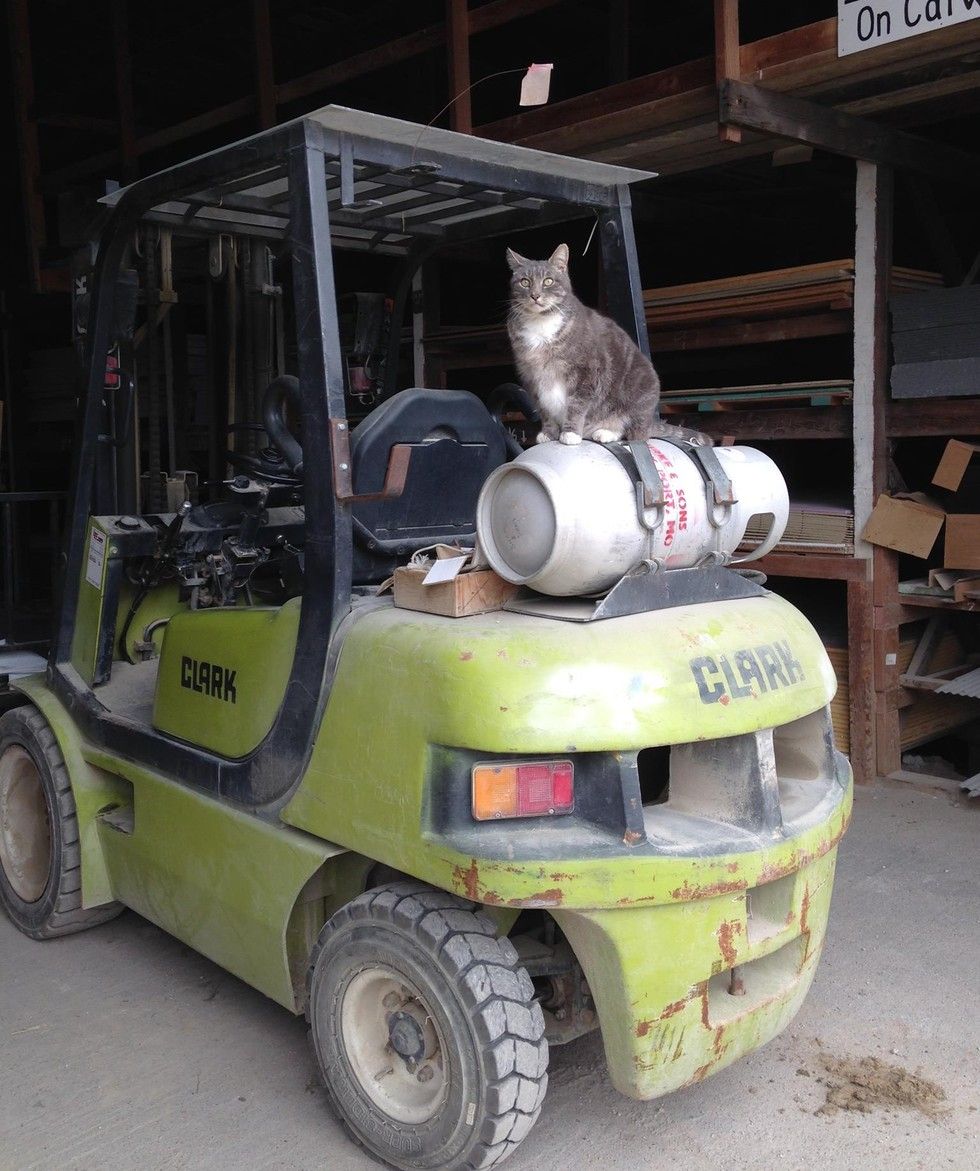 No one knows Hoover's exact age. The friendly feline came to the family 12 years ago as a young cat, so they believe Hoover is around 13.

What a rough night at the lumberyard. 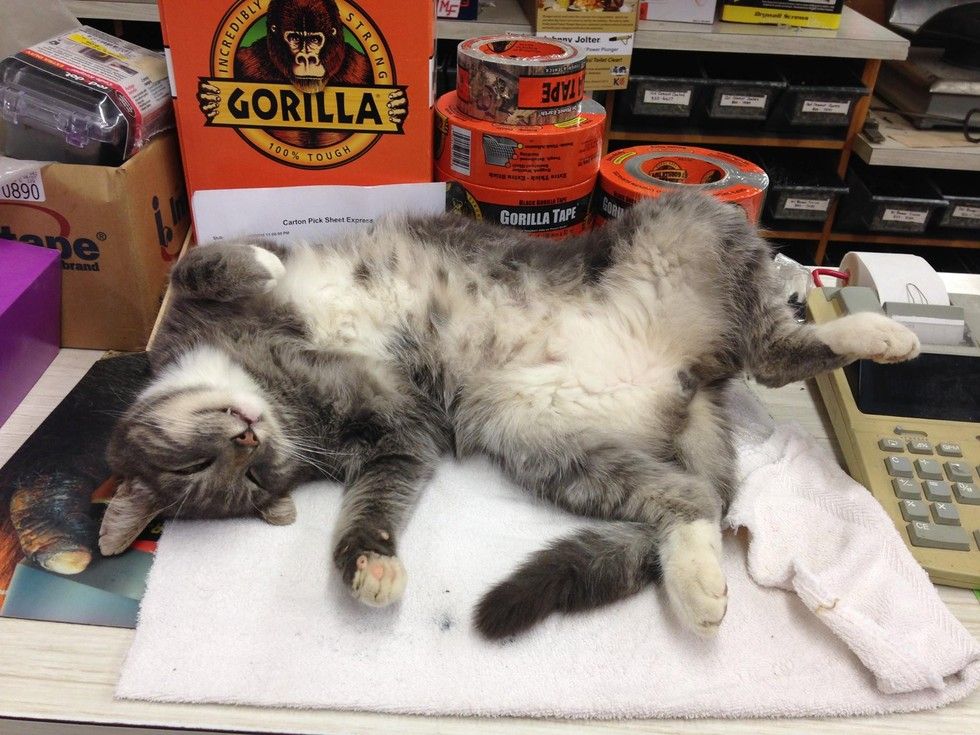 He is very easy going.

"He really likes to lay down on the register counter where customers pet him," Jesse said.

Hoover found a good spot for a nap. 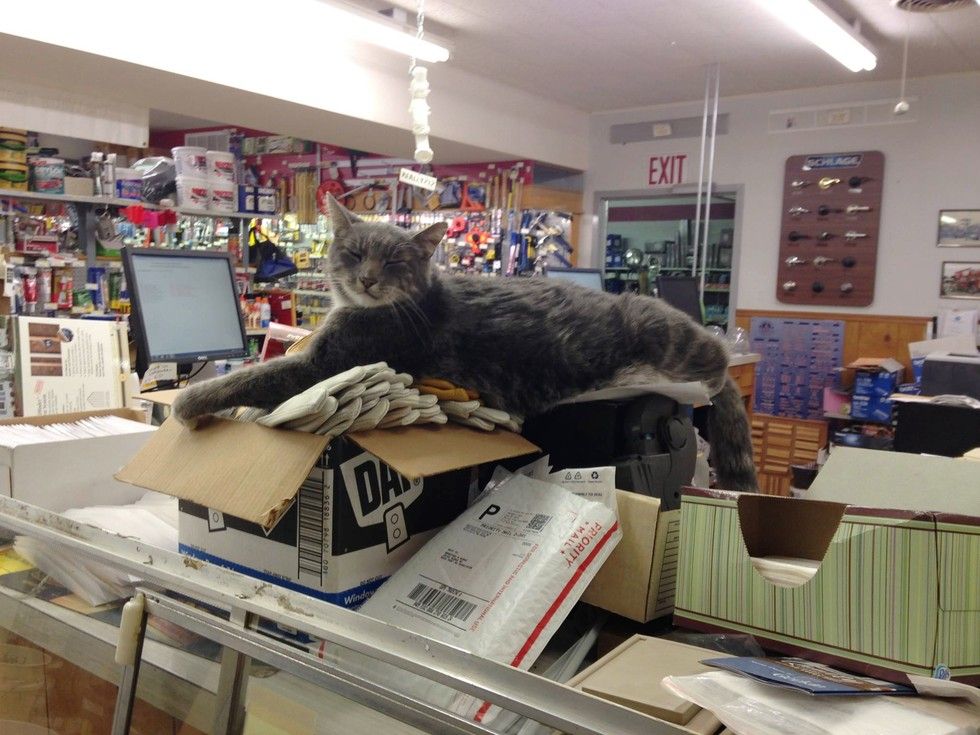 "He'll grab a hold of your hand gently and lick it while you rub him. He likes to get up on the sales counter while we're waiting on a customer and either rub up on them or lay down on what they are buying and demand attention." 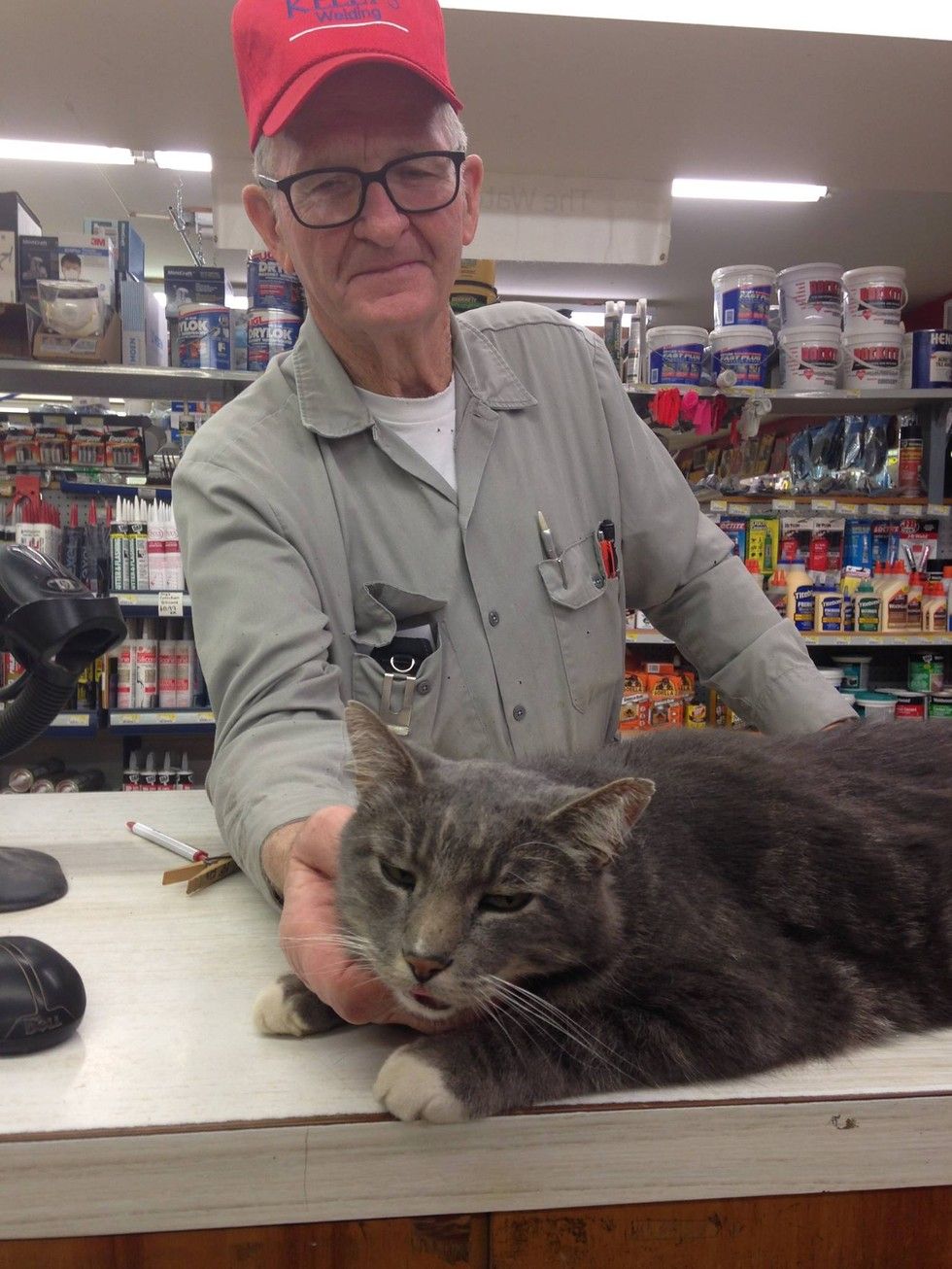 "Now that he is getting up in age he likes to find a nice shady spot and lay down," Jesse said.

Whenever a customer comes by, he rolls on his back and demands belly rubs and cuddles. It's impossible to say no. 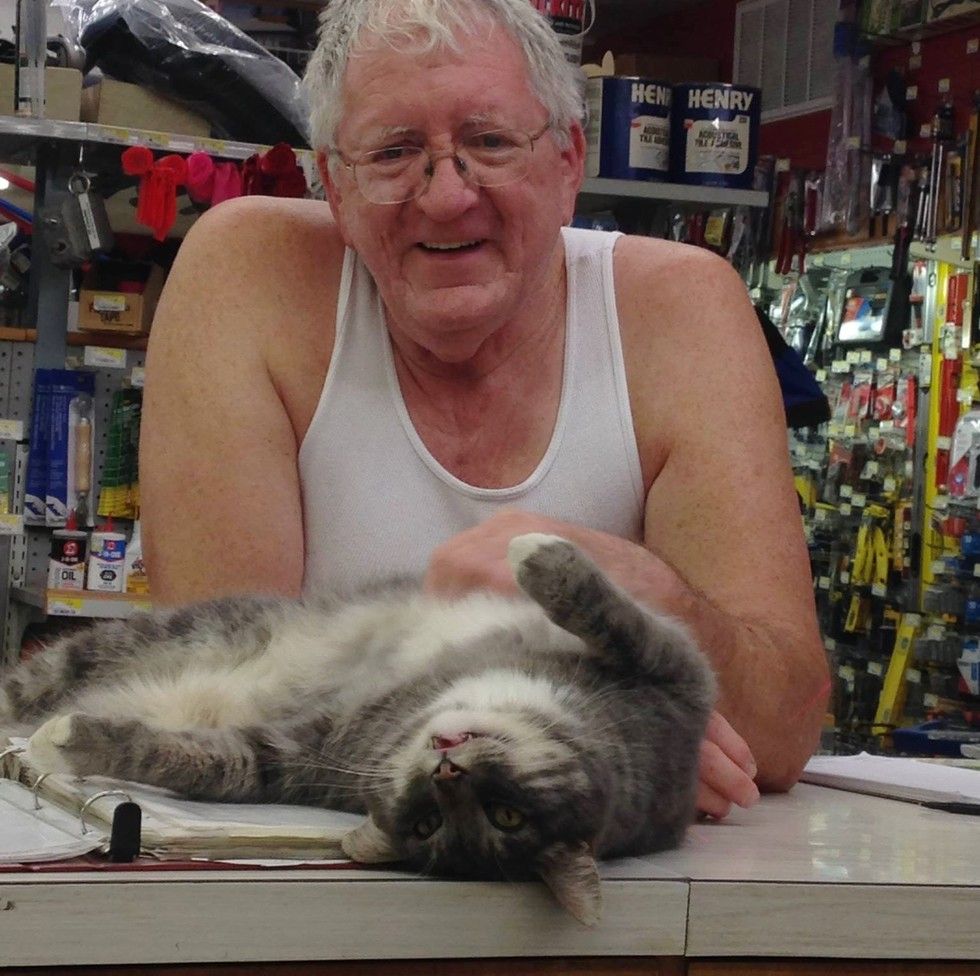 The family also rescued another stray cat soon after they found Hoover.

"My mother found another cat down the road from the lumber yard with a cheeto bag stuck on his head. She pulled over and pulled the bag off of his head and moved him away from the road," Jesse told Love Meow.

"It didn't take long for him to find his way up to the lumber yard. So we gave him the name Cheeto. He and Hoover keep out the mice and give the customers entertainment when they come." 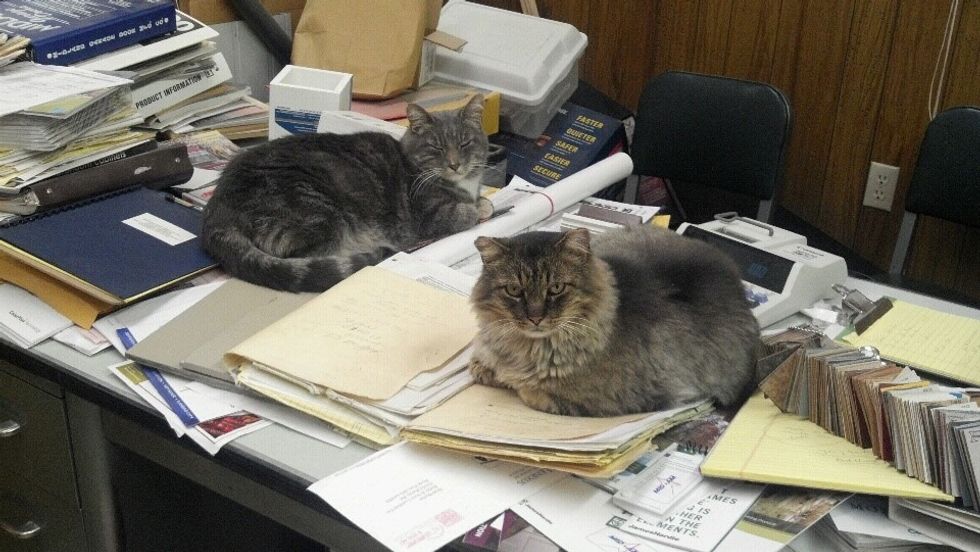 Hoover has been giving cuddles at the lumberyard since he made it his home 12 years ago.

He's brought so many smiles to customers and even changed a few lives with his unadulterated love. 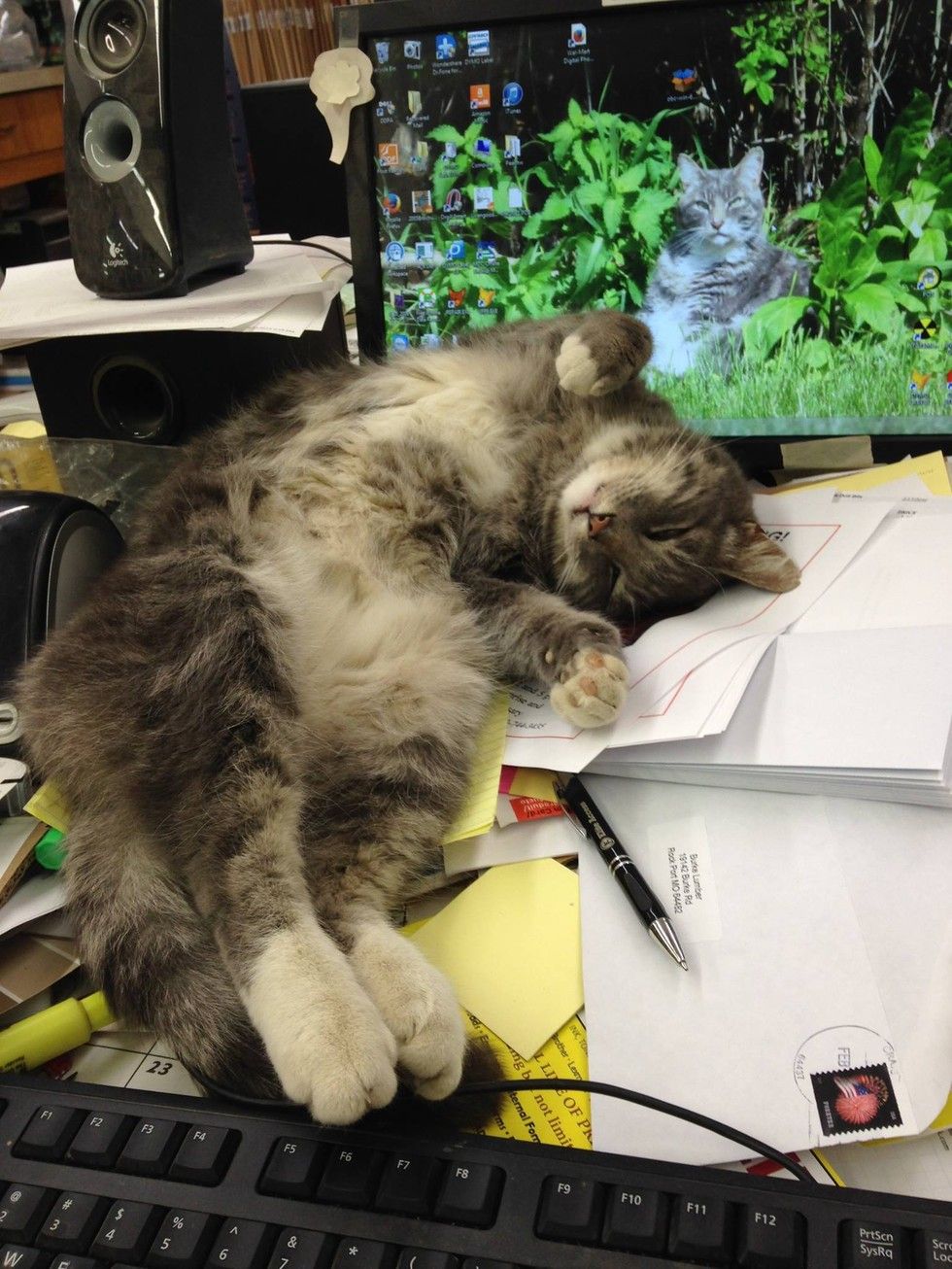 Related story: This Local Book Store Has a Cat with Some Serious Cattitude!