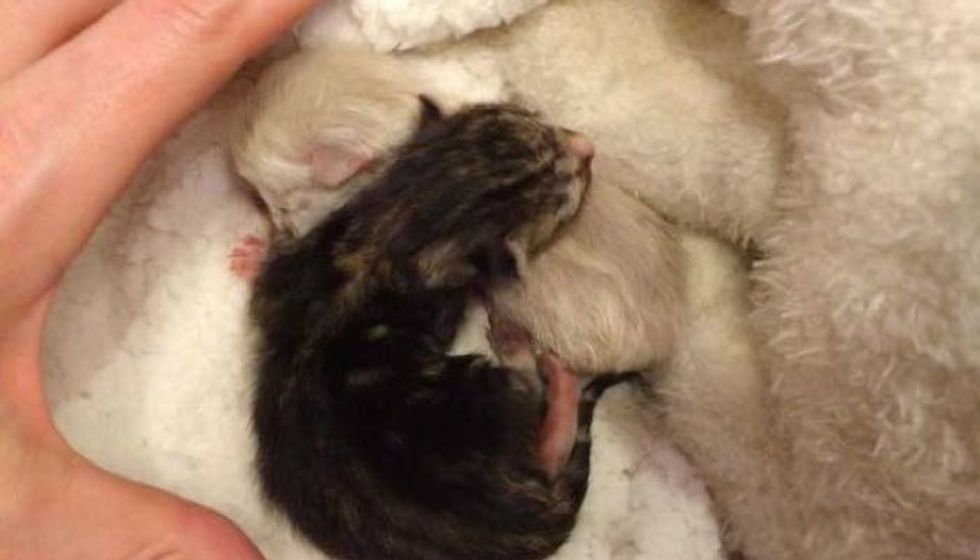 Two motherless kittens ended up on death row for being... newborns, but their fate was rewritten when someone came to their rescue, scooped them up and gave them a life they so deserve.

They were so tiny that both kittens could fit in the palm of a hand.

"Those two arrived as super tiny newborns from a local high kill shelter. Their names are Flora and Dahlia. 100% of the kittens we intake are from euthanasia lists. It's a last chance rescue," Saving Grace Rescue told Love Meow.

They took the kittens in and placed them in a foster home where they were looked after around the clock.

More info on Saving Grace Rescue | Facebook | How you can help

Flora taking her first bottle from a volunteer, wiggling her ears and kneading the air with her teeny paws.

Dahlia was completely white when she came to the rescue, but soon her color began to change :).

Eyes opened! The kittens adventuring out of their nest and starting to learn to walk and explore.

They stole the hearts of their foster parents who couldn't part with the two sister kittens. They became their forever humans!

It's been a year since they were rescued. Flora has grown into a gorgeous tabby girl.

Dahlia is all grown up! What a beauty she's become!

Saving Grace Rescue Inc is a 501c3 Non Profit that takes in kittens that are in danger of euthanasia in shelters due to an injury or special need. Here's how you can help so they can continue saving kitties like Flora and Dahlia.

Spay and neuter! Share this story and help spread the word!