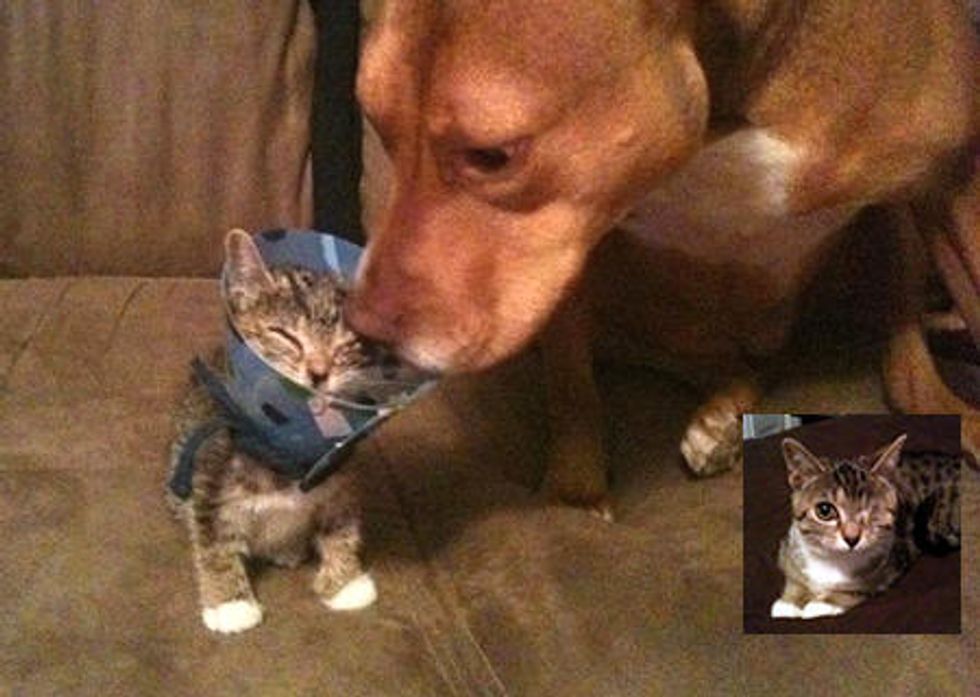 Olivia the cat was found unable to see. A dog named Sadie became her closest companion and was there every step of the way, protecting her tiny kitten friend until she recovered. This is Olivia's eye adventure.

"My husband found this little girl under a car. She was covered in burrs and both eyes were matted shut. We cleaned her up and rigged a tiny e-collar so that she would not rub her eyes. We had to syringe feed her kitten formula because of a severe upper respiratory infection that hindered her sense of smell," Feetyoumeet of imgur wrote.

"I took her into my work (I am a veterinary technician for a veterinary ophthalmologist) and examined her eyes... We started her on multiple eye medications 6x daily." They were able to save one of Olivia's eyes.

Olivia was found unable to see. "She was covered in burrs and both eyes were matted shut." The couple cleaned her up and gave her a plush friend.

Sadie the dog saw the little rescue kitten and immediately came over to shower her with love.

Sadie became Olivia's mom that she never had, watching over her every step of the way.

One of Olivia's eyes had completely healed, but the other couldn't be saved. They took her to surgery.

After the surgery, Sadie was very concerned about her friend and came to check on her.

Today Olivia is a cute pirate kitty. Though she only has one eye, she is a happy and healthy cat who has a forever home and people that love her to bits.