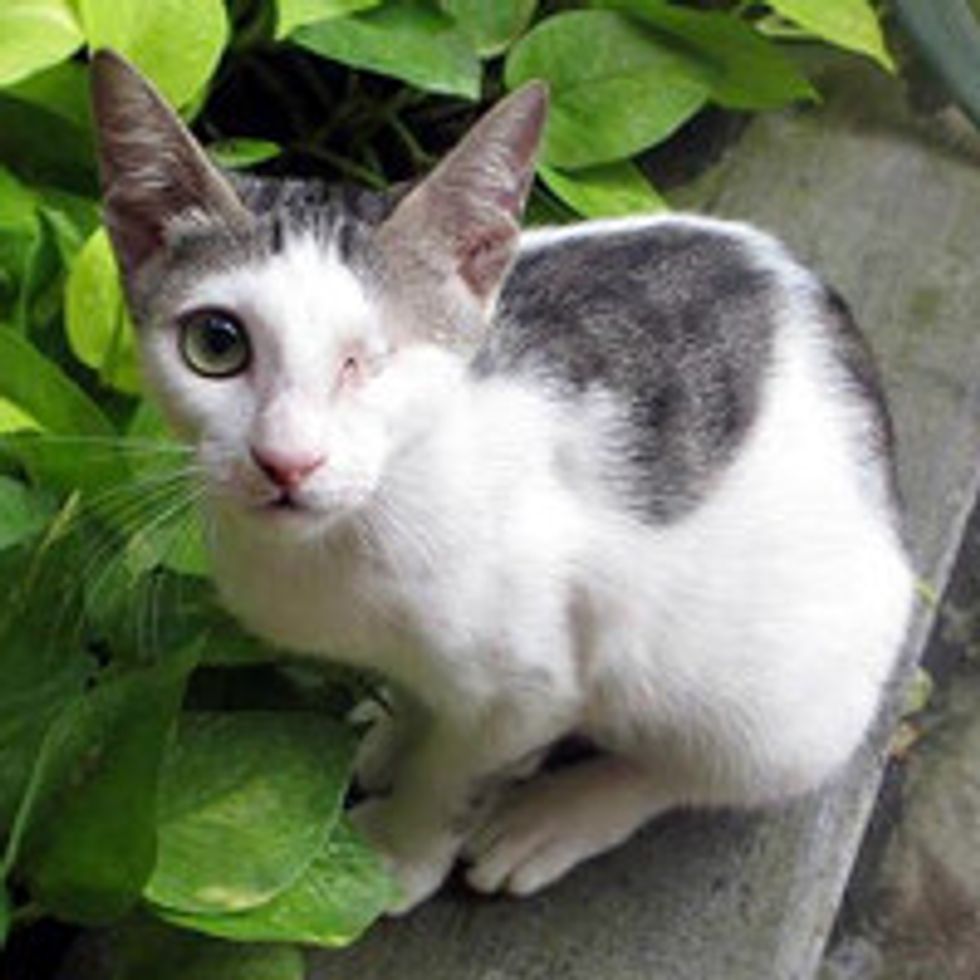 One-eyed Cat Saved in Indonesia, Finds Forever Home in the US

This is a story of an one-eyed cat who found her human on the street of Jakarta, Indonesia and eventually found her way to her forever home in the US.

Having witnessed death, deformities, diseases and an attitude of disdain regarding the numerous cats that roam the streets of Jakarta Indonesia, I thought I would grow immune to it.

One cat made sure that I didn't.

While walking back to my apartment after work late one night, a kitten wandered into my path, exerting a 'help me' meow that was hard to miss. As I bent down to pick up this dirty little orphan, a couple of things crossed my mind. 1. Why is this cat not afraid of me like most feral cats in the city are? 2. What happened to this cat's eye?

Upon closer inspection, this cat did not have a left eye. All that remained was an empty eye socket that was wet and dirty. I took the cat to the apartment, where I sneaked it past security and into my room. I had a can of tuna, so it became the cat's can of tuna. I let the cat spend the night and the next morning I went out for some food, cat litter and a box. A couple of days later, I took the cat to the vet for a checkup. It was explained to me that some cats born under such conditions have diseases which can affect the eyes.

Since this particular vet didn't seem overly concerned about doing any bloodwork on the cat (though they did tell me it was a female), I took the kitty to another vet. This one did bloodwork. In addition to going home with a hefty bill, I was given medication to treat ear mites, worms, the diseased eye socket and a liver deficiency. She was also given her first set of vaccinations.

The cat decided that if I was going to keep her, she needed a name. So, while typing an e-mail to a friend, she jumped onto the keyboard and changed the subject line to read 'Elly P'. I didn't notice this until it was brought to my attention by the e-mail's recipient. I removed the P and she became Elly.

Months later, it was time for her to be spayed. Since the eye infection was gone, they decided to sew the eye shut in the process.

In February, I made arrangements to bring Elly back to the US. She was healthy, and there was no way I was going to leave her behind. I was fearful about the 20-plus hour trip from Jakarta to Los Angeles (8-hour layover in Tokyo included), but she made the trip with flying colors (no pun intended) and now has a backyard in which to play in.

I still don't know what prompted Elly's path and mine to cross when and where it did but it's hard to imagine the kind of life she would have lived had I not brought her home that night.

Elly the one-eyed cat saved on the streets of Indonesia

He flew her back to the US. Today she lives happily at her forever home and has a backyard to play in.