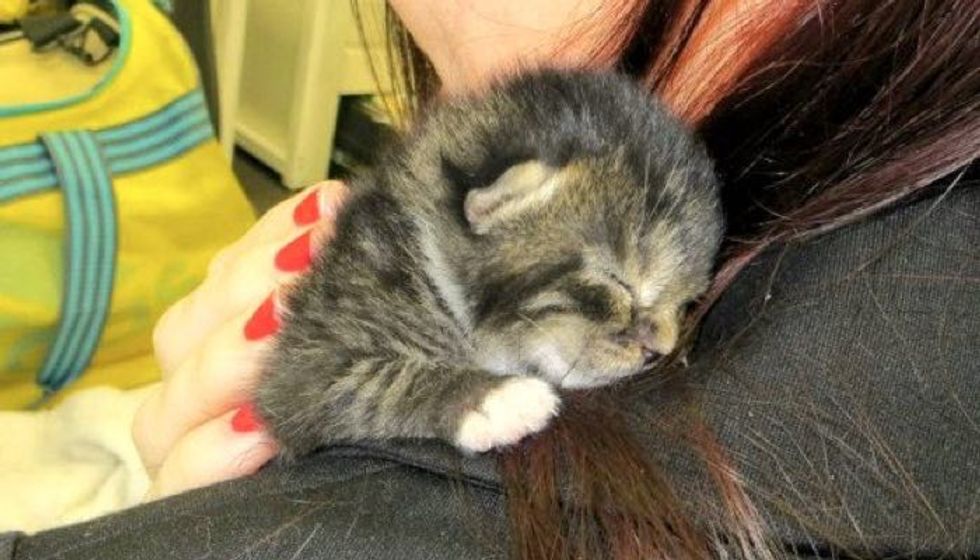 Meet Palmer the kitty, who was still a baby when they found him on the street. This is his journey to his forever home.

"In April, I received an email from a woman who was handed a kitten by a young boy in her neighborhood. He got him from a man handing out kittens from a box on the street, and placed him in her palm on Palm Sunday. This is how Palmer got his name," said Stephanie Seiler of Big City Little Kitty.

"He was only a couple of days old. He weighed 4 ounces, and still had his umbilical cord attached. Tigra (the cat) gave him a thorough examination."

"Luckily, he latched on to the bottle very quickly, and I don't think I've ever had a kitten who ate as well as he did. He took his food seriously (and I think he still does)."

"He was a happy little guy!"

"This is the day he found his toes!"

"He spent a lot of time at my office, and my coworkers co-fostered him! When I had to be in class, they all stepped up to feed him and snuggle him! Here he is in his kitten sling with auntie Billie."

Ready for his new home.

"Palmer is living happily ever after in his furrever home, with his mama who reached out to me for help when he was placed in her palm."