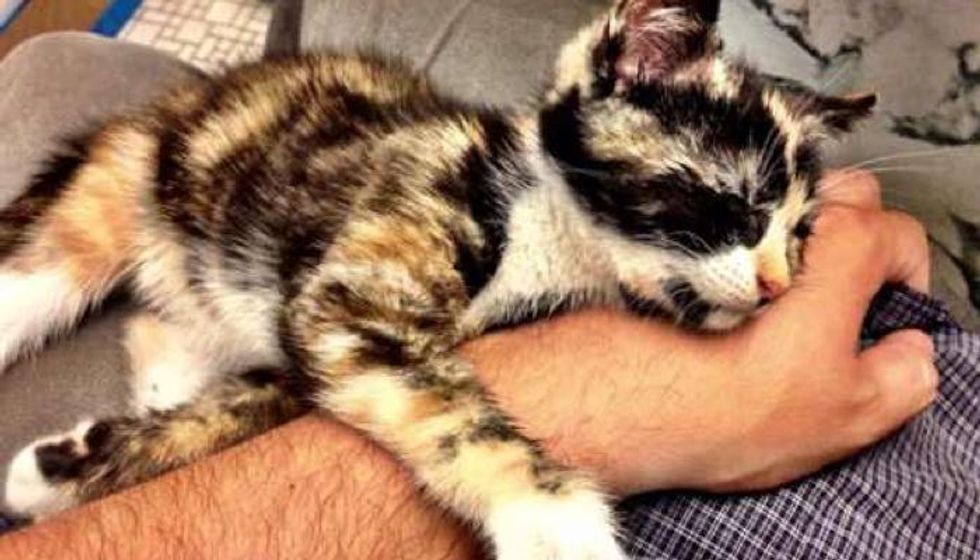 This adorable calico was given a second chance at life by a stroke of luck. Brooklyn-based photographer, Antonio M. Rosario, noticed a tiny kitten hiding under the hood of a Mercedes. “If we had been a minute off in any direction, this would never have happened,” Rosario told TODAY.com.

So, here’s the story about Mercedes the kitten.

We’re driving along Ocean Parkway, headed to Brighton Beach for a morning at the beach. Sometime while we’re driving (I’m in the passenger seat) I hear what sounds like a cat crying. I don’t pay it that much mind as I figure we’re passing by some alley cats or something. Then, a little later when we hit a stoplight, I hear the sound again. This time I think that we have a cat in our car. I look out behind me and out the window and in the adjacent lane is see a Mercedes s550 with its left front turn signal light missing from the housing. In this housing is the little face of a kitten crying.

Whoa! I open the window and wave at the woman driving the car. I grab her attention and point to the front of her car. “You have a cat inside your car!” I yell. She rolls down her window and I yell at her again. “What should I do? Is it dead?” she says. “No, pull over there,” I yell back.

We both pull over to the service road on Ocean Parkway and like Avenue U or something. I tell her to shut down her engine. She does and gets out of the car and moves like 20 feet away, as if the car is on fire or something. I tell her again that there’s a cat in her car and ask her to pop open the hood. She has no idea how to do this. I can see the kitten sitting inside the housing where the turn signal lamp should be. She’s staring at me and I reach in to grab her and she disappears further into the engine.

At this point, we’re attracting a small crowd. I’m asking people’s who walk by if they know how to open the hood of the car so we can rescue the kitten. Two guys get into the car and are searching for the hood release while I’m trying to reach in for the kitten.

Mercedes in the car after her rescue

Suddenly, I see a paw protruding from the right front part of the car, near the turn signal housing. It’s limp. Elizabeth and I fear the kitten is dead because the engine was so hot. I push at the paw and shove it back inside the housing. The kitten could not come out that way anyway. I could feel it and I poked it a bit and it started crying again.

The driver said to me, along with some of the other people who were there (they may have known the driver) that it was now ok and we could go and she would either drive over to the mechanic or the police would take care of it. We did not agree that it was fine. We told her if she started the car it would kill the kitten for sure. I don’t think they were being malevolent in any way, I just don’t think they knew what to do. Some other guys also cautioned about starting the car.

Now the kitten was crying. We finally got the hood open and I could finally see the kitten had moved a bit more towards the center of the car, between the radiator and the fan. She was looking up at us. I tried to reach my arm down, but there was not enough room and I kept burning myself on the radiator cap. Anothe guy started tapping underneath the car in order to scare her back towards the open housing on the left side of the car. That’s when she decided to take a left turn and head further into the engine block, out of our sight. CRAP!!!!!

Mercedes relaxing after her first night with us

One of the guys helping saw her and said she was near an opening that she could climb down and exit the engine. I got on the ground and pushed myself under the car as much as I could. I saw the hole and a little bit of fur. I asked Elizabeth for some of her breakfast scone so that I might entice her to eat. The driver said she had some ground beef from the supermarket, so I took some of that too. I shoved my arm under the car and held the meat up to the hole. I could see the kitten and she became interested in the meat. She first poked her head out of the hole. I told everyone to be quiet so we wouldn’t scare her back into the engine. Finally she dropped one leg down then another. Finally, she dropped out of the hole and I grabbed her firmly and quick.

We had a small crowd gathered and I’m holding her against my chest. Everyone’s thanking us and we’re thanking them, and the driver was relieved and happy. “Are you going to keep her?” a guy asked. What do you think was our answer.

We all agreed that she should be named Mercedes. Merci (Mercy) for short.

Welcome to our world Merci. What a start!

We drove her right to the vet. She seems pretty healthy. Some conjunctivitis in her eyes. Maybe some worms. Possibly a few fleas if any. No feline leukemia (they have a 5-minute test they do now). She was starving and the vet gave her a can of food which she vacuumed down. No RFID tag under her skin. So things look good for her, at the moment. She’s now installed in one of our bathrooms, separated from the Men who, so far, haven’t freaked out.

Update: Mercedes and her human now!