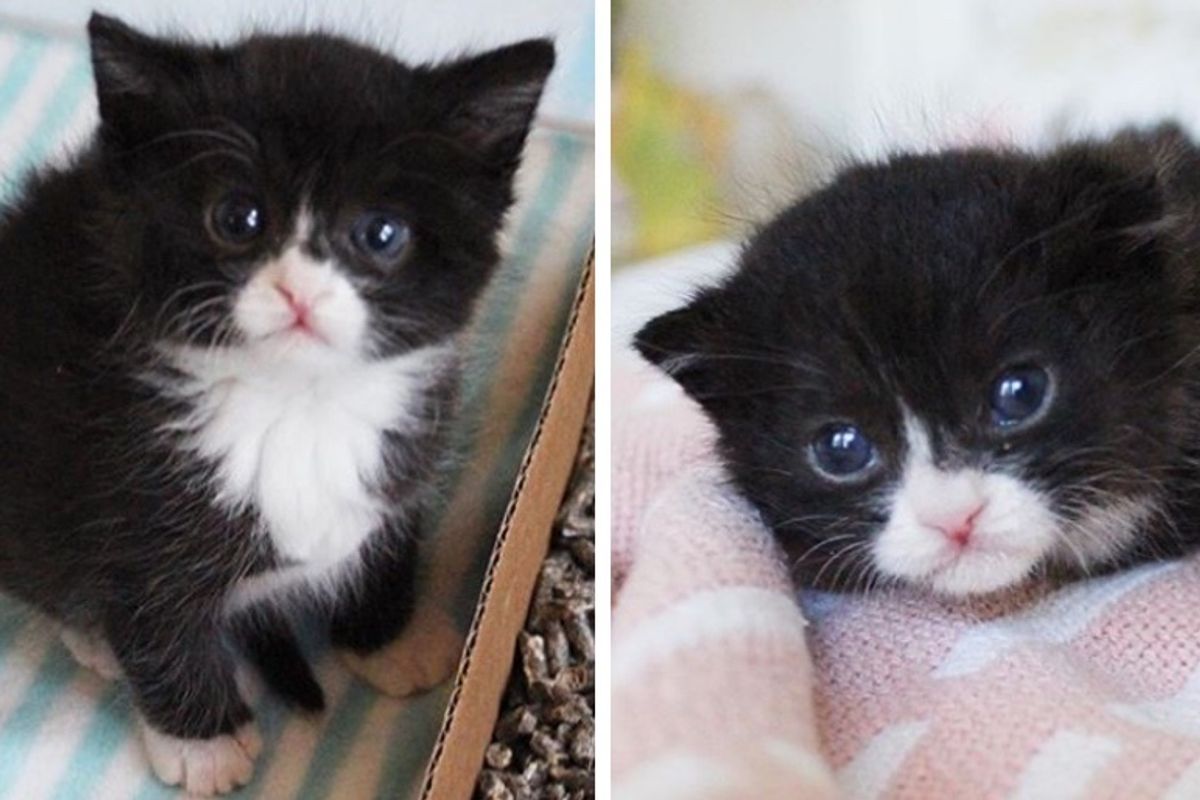 A tuxedo kitten who came from the streets, found the perfect friend she had been waiting for.

Ripley the tuxedo was found in a cat colony in Los Angeles when a TNR (trap-neuter-return) rescuer heard her cries. She was the only survivor in her litter. Despite being very weak, she used everything she had to cry out for help.

Ashley Kelley, a foster volunteer of Wrenn Rescues, learned about her plight and immediately offered to help. "Ripley has the strongest little spirit and she was not ready to give up. I don't think she would have made it much longer if her rescuer hadn't found her," Ashley shared with Love Meow.

The kitten was dehydrated and couldn't eat on her own. She had to be tube-fed and given fluids overnight. 18 hours later, the little warrior kitty put on 10 grams and was able to latch onto her bottle, gulping strongly.

As her appetite grew, her tiny body quickly filled out. She would show off her cute, round belly after every feeding before conking out in her foster mom's arms. With proper medical care, good food and comfy beds, Ripley finally got a clean bill of health.

The tuxedo still had a lot of growing to do since the rough start had set her behind in development.

At five weeks old, she was just the size of a 3.5 week-old. "She was the tiniest, mightiest girl," Ashley said.

Little Ripley always wanted a companion and didn't like being alone. When Ashley was contacted about another singleton needing foster care, she took the new kitty into her home.

A tiny tabby was found in a tree all alone. Children nearby heard his pitiful meows and managed to get him down to safety. The kitten, Pikachu (named by the children), was just skin and bones and covered in fleas.

Wrenn Rescues took him in and got him the medical attention he desperately needed. "Four days later, he was like a new man. He was very active, silly and cuddly," Ashley said.

"Pikachu is the sweetest little guy. He loves to have his face and belly rubbed, and he really just can't get enough human affection. I am so happy he doesn't have to grow up on the streets."

When the tabby boy was medically clear, he was ready to meet Ripley who had been anticipating this very moment.

The tuxedo was excited to finally get to know Pikachu up-close. She took to him right away, wanting to play. The tabby was a bit shy and unsure at first, but caved in to Ripley's persistent begging very quickly.

Within minutes, the two were mingling beautifully as if they had been best friends all their lives. They began to share toys and follow each other around their play pen.

"They are bonded in the best possible way. You can pick one up and the other won't panic, but will stay close by to keep an eye on their buddy. They sleep together for all their naps, and they groom each other," Ashley told Love Meow.

"It really worked out so well because they're both really small, but they are exactly the same size and age, down to the ounces. They were meant to be buddies."

The two kittens are thriving as a pair. They keep each other entertained constantly — chasing or pouncing on each other's tail or batting a small ball back and forth as a team.

When they need to recharge after a long play session, they cuddle up next to each other and purr themselves to sleep.

Every morning Ripley comes running to the sound of canned food being opened while her buddy trails behind.

They sing the cutest little duet over and over until their breakfast is served.

The two feline friends appreciate the little things in life and are so happy to have each other.

Ripley and Pikachu are now ready to look for a forever home.

They are loving their VIP life and can't wait to find a place of their own, together.

Share this story with your friends. Follow updates on Ripley and Pikachu and Ashley's fosters on Instagram. The two best friends are looking for a home via Wrenn Rescues.