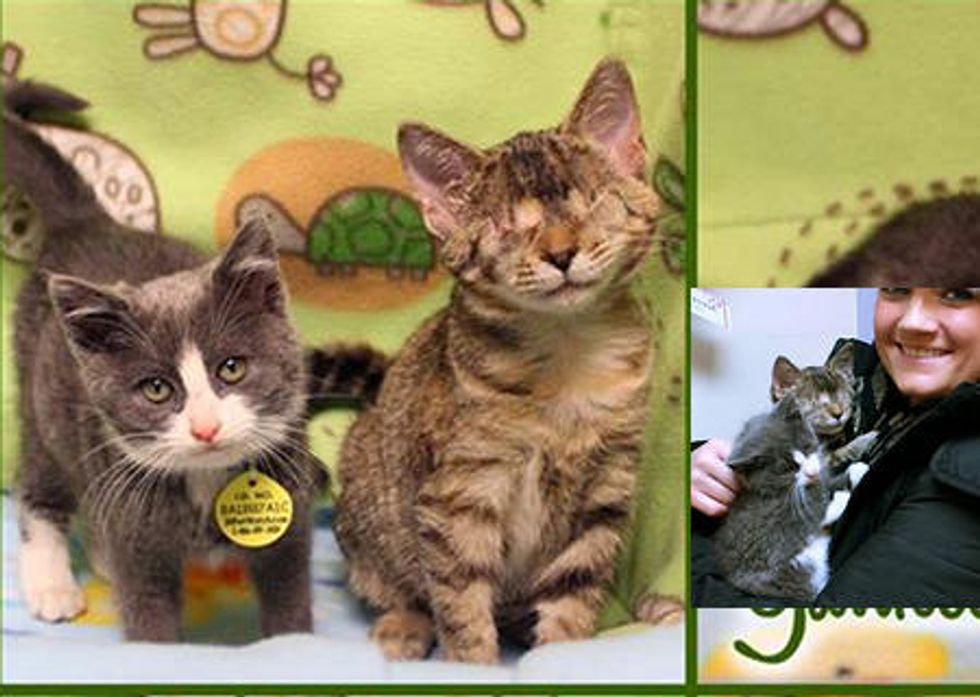 Meet these two brave kittens, one blind and the other found under a trailer. Their paths were destined to cross. Wisconsin Humane Society made it their mission to make their wish come true this Christmas - a forever loving home.

Wisconsin Humane Society wrote: "Yankee, a tiny grey and white kitten, was found alone under a trailer in an alleyway. He had an injured shoulder and was terrified of people. After he was brought to the WHS Racine Campus, our staff persistently showed him what it felt like to be loved, and he soon blossomed into an affectionate little gentleman.

Pine Cone, on the other hand, was a ham for attention from the day she arrived at the shelter, despite having two infected, ruptured eyes and no vision. Our Dr. Langston knew the only way she would be healthy and pain-free was to remove what was left of her eyes. She was a wonderful patient and healed up very nicely.

Knowing that both of these kittens had been through so much at such a young age, we introduced Yankee to Pine Cone. They took to each other immediately; playing when they felt well and cuddling when they needed comfort. Once we saw how bonded they had become, we made them an official Required Pair."

Today the kittens were adopted together and they are having their first Christmas at a place they call home.

Two brave kittens, one blind and the other rescued from under a trailer. Their paths were destined to cross.

Pine Cone lost her eyes, but gained a new life. Yankee was scared of people when he was rescued but later blossomed into an affectionate little gentleman. They were introduced at the shelter. It was an instant bond.

Adopted today! Pine Cone and Yankee are having their first Christmas at a place they call their forever home.