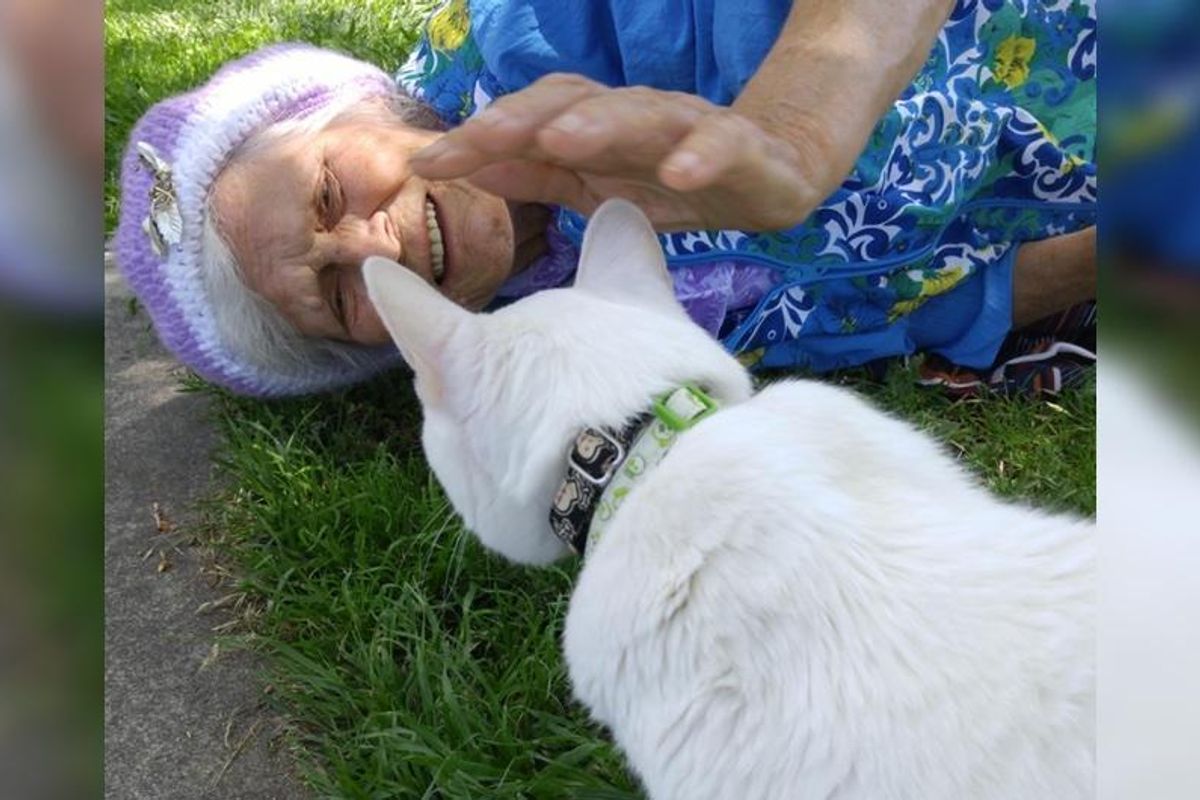 17-year-old Cat Befriends 85-year-old Stranger and Turns Her into a Kid Again..

A 17-year-old cat befriended an 85-year-old woman in a park. Not only did he bring comfort and a big smile to her face, but both of them felt young again. 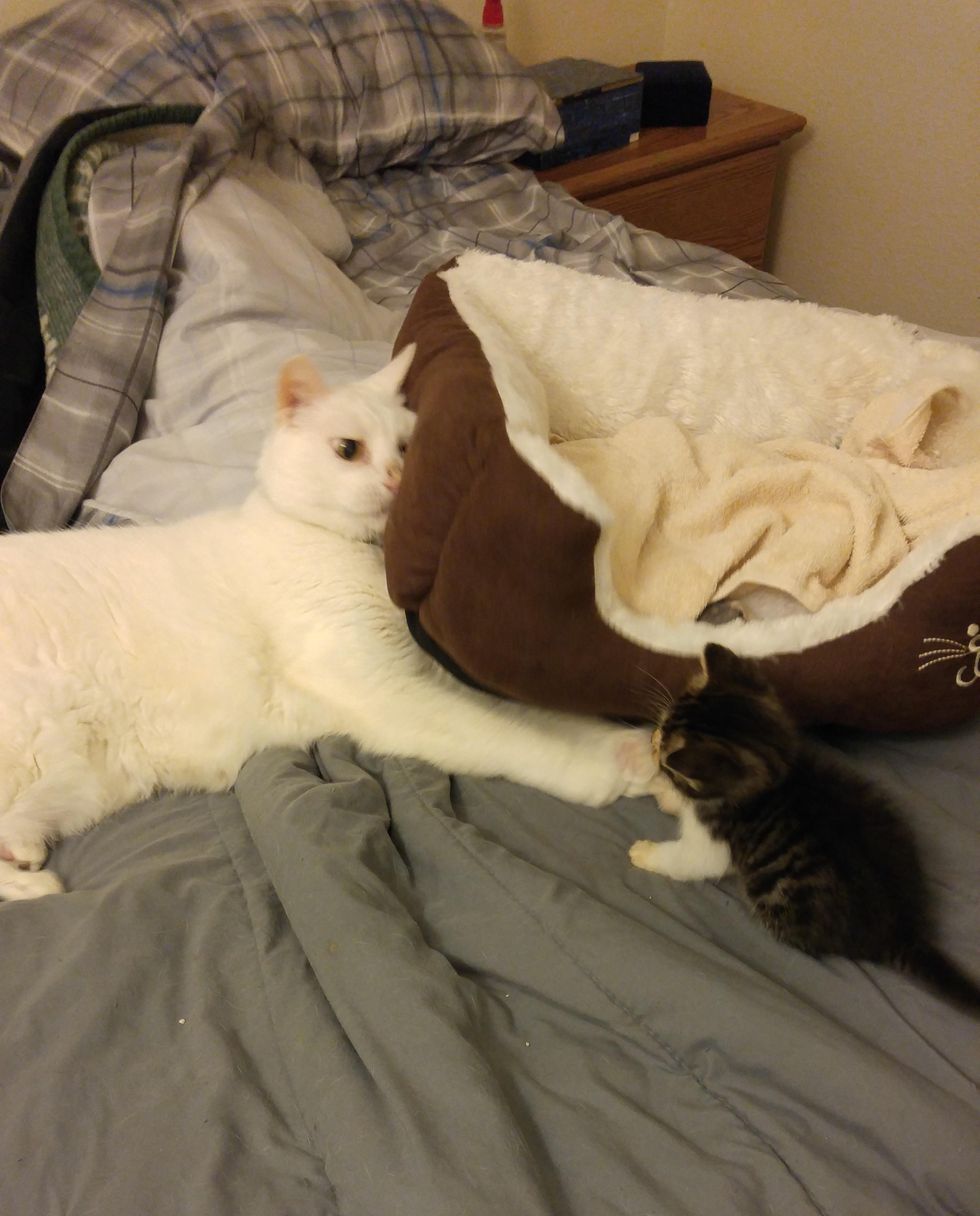 Darwin playing with his foster kittenSupplied by Kellen

16 years ago, Kellen found Darwin from a local shelter. He was born deaf and had a rough beginning to life. Darwin was in such poor shape that even the vet deemed him untreatable and had given up trying to save him, but the kitten hung on and survived despite all the odds stacked up against him.

"He's always had something miraculous about him," Kellen told Love Meow.

As Darwin got older, his love for others only grew fonder. This friendly gentle soul has a big and caring heart for both furry and human kind. "He lets my fosters steal his food. Every person and animal he meets is a friend."

Darwin who has a spirit of a kitten, enjoys going out on walks with his human mom and loves all the attention from people he meets along the way, but little did they know that he would have quite an impact on someone whom he had never met. 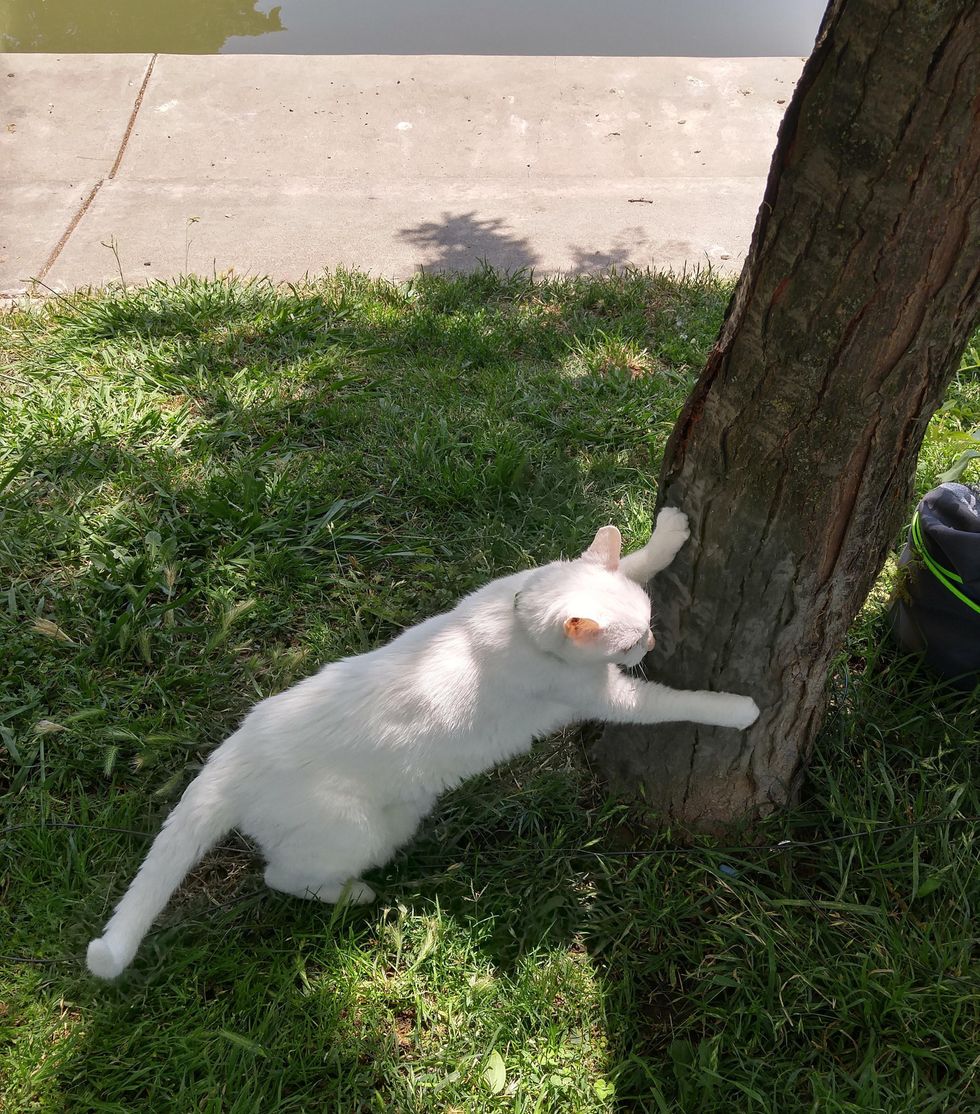 "We used to go out more, but now that Darwin is older, his balance isn't 100% anymore and has some arthritis, so I'm a little hesitant to take him out as much as I used to," Kellen told Love Meow.

Around Darwin's 17th birthday, they went to a nearby park for a stroll, and that's when they met Lida, 85-year-old lady from Uzbekistan. She was alone in the park and didn't show much emotion as she stared away into the horizon, but when Darwin showed up, everything changed. 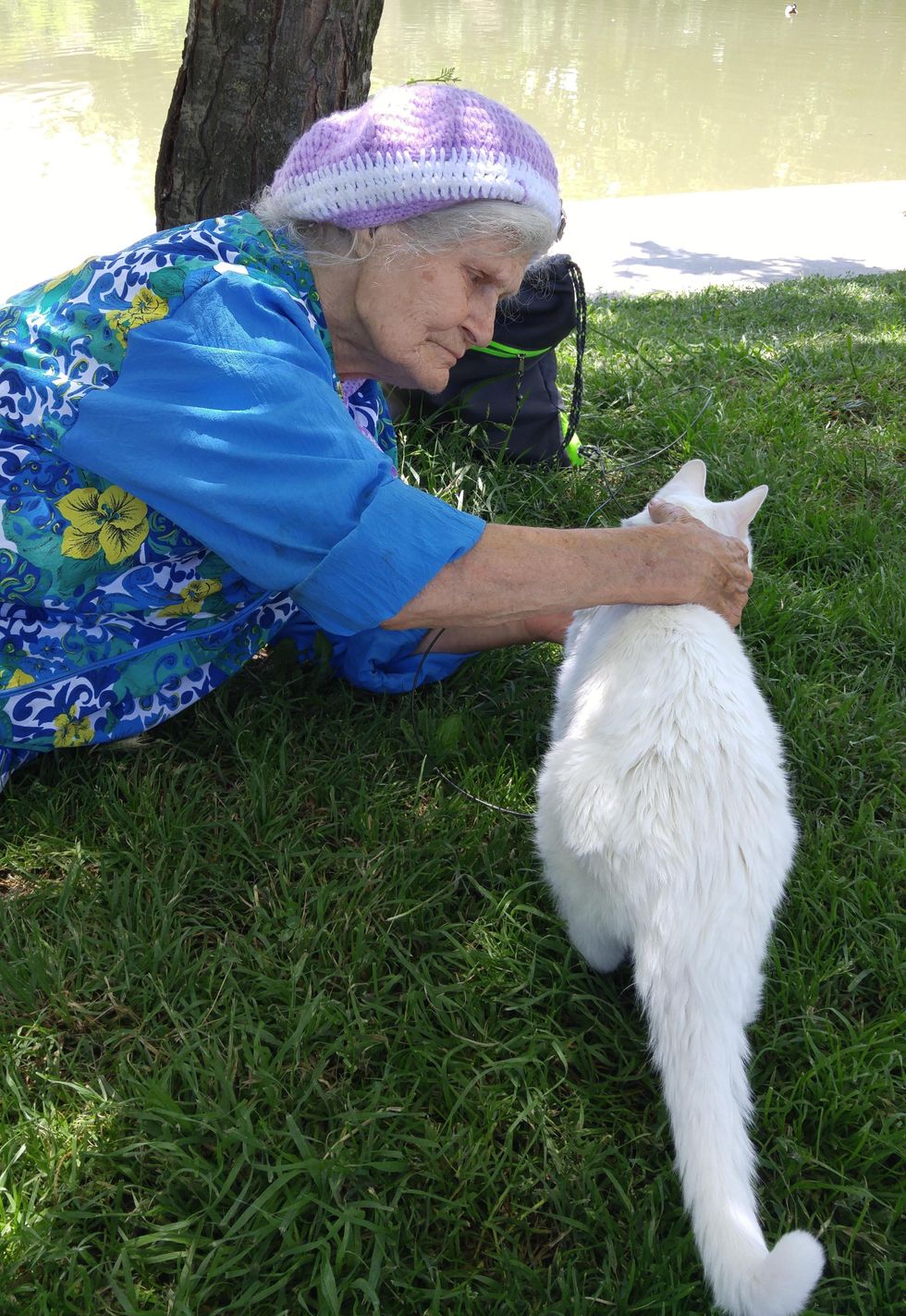 "She was just sitting by the pond… she saw Darwin and lit right up," Kellen told Love Meow.

Kellen invited Lida to meet and pet Darwin. "She got up just about as steady as he is, which is sometimes not at all, came over and sat with him."

Darwin the friendly feline nudged his face against her hands as she stroke him on his head. Lida let out a big smile on her face while she was talking to her feline friend in a soft and sweet tone. They nuzzled with each other and cuddled gently with purrs reverberating in the air. 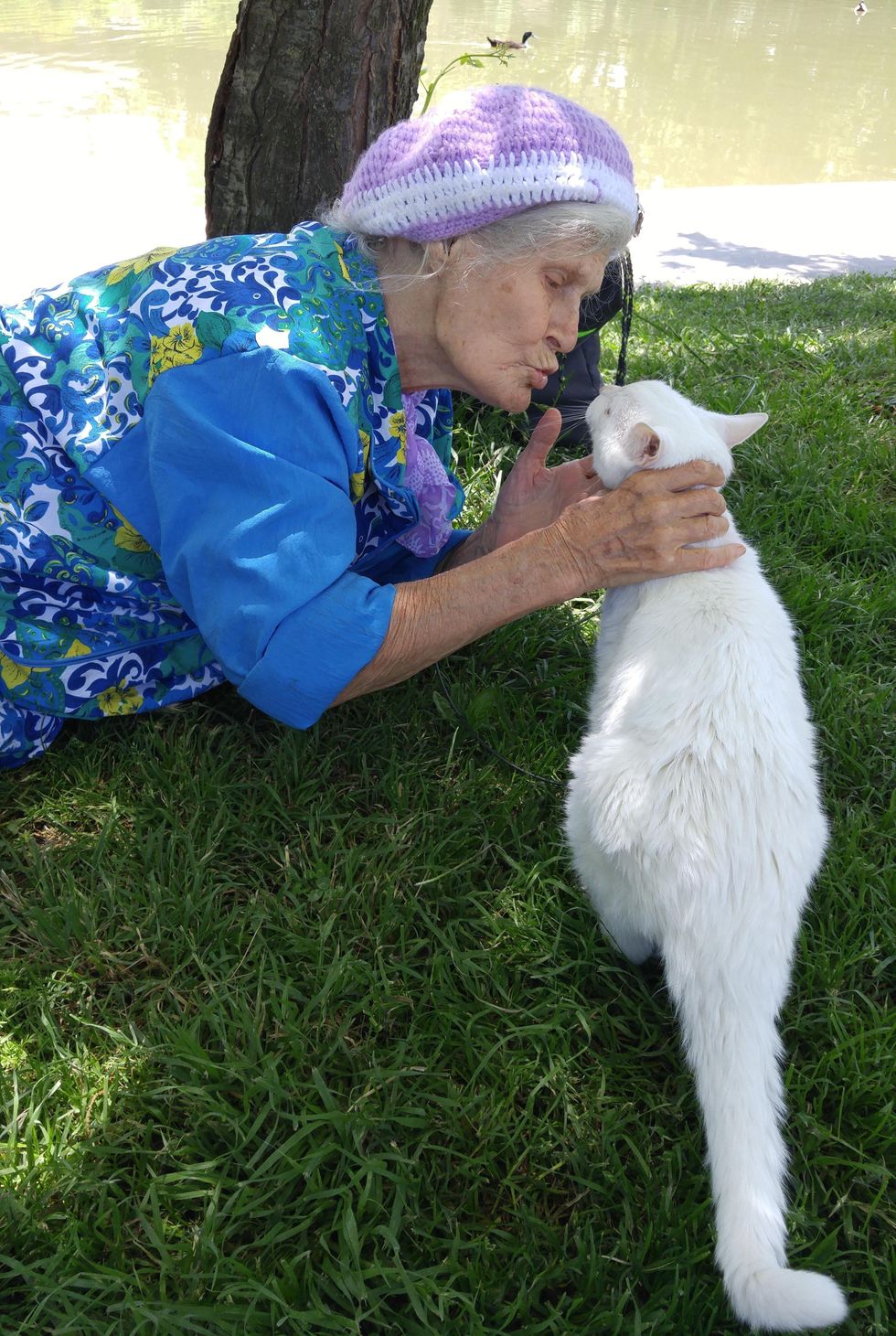 That day, both Darwin and Lida were young again.

"She told me about her cat that died at 12, how beautiful he had been and how she missed him," Kellen told Love Meow. "I was trying to choke back a lump in my throat the entire time she was with us."

Lida gave Kellen her address and she plans to stop by with Darwin to see her again. 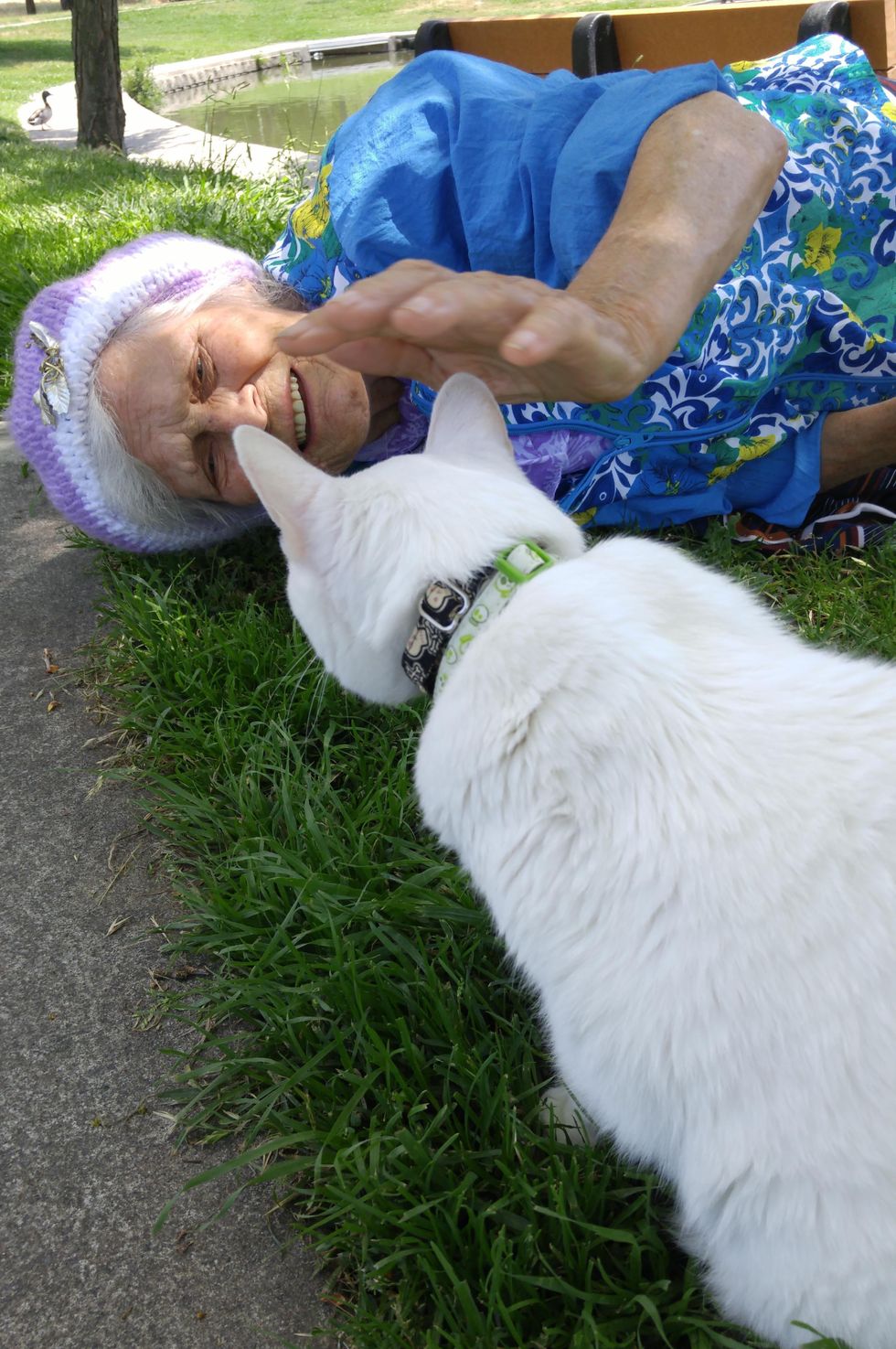 "Darwin is a natural healer and caretaker… in his world, there is no fear, no enemies, and no strangers. Even people who don't like cats often like him, and other cats who are cat aggressive don't have a problem with him," Kellen told Love Meow.

"Lida seemed withdrawn, sitting with her arms around her knees when I first saw her... interacting with Darwin, she really shone." 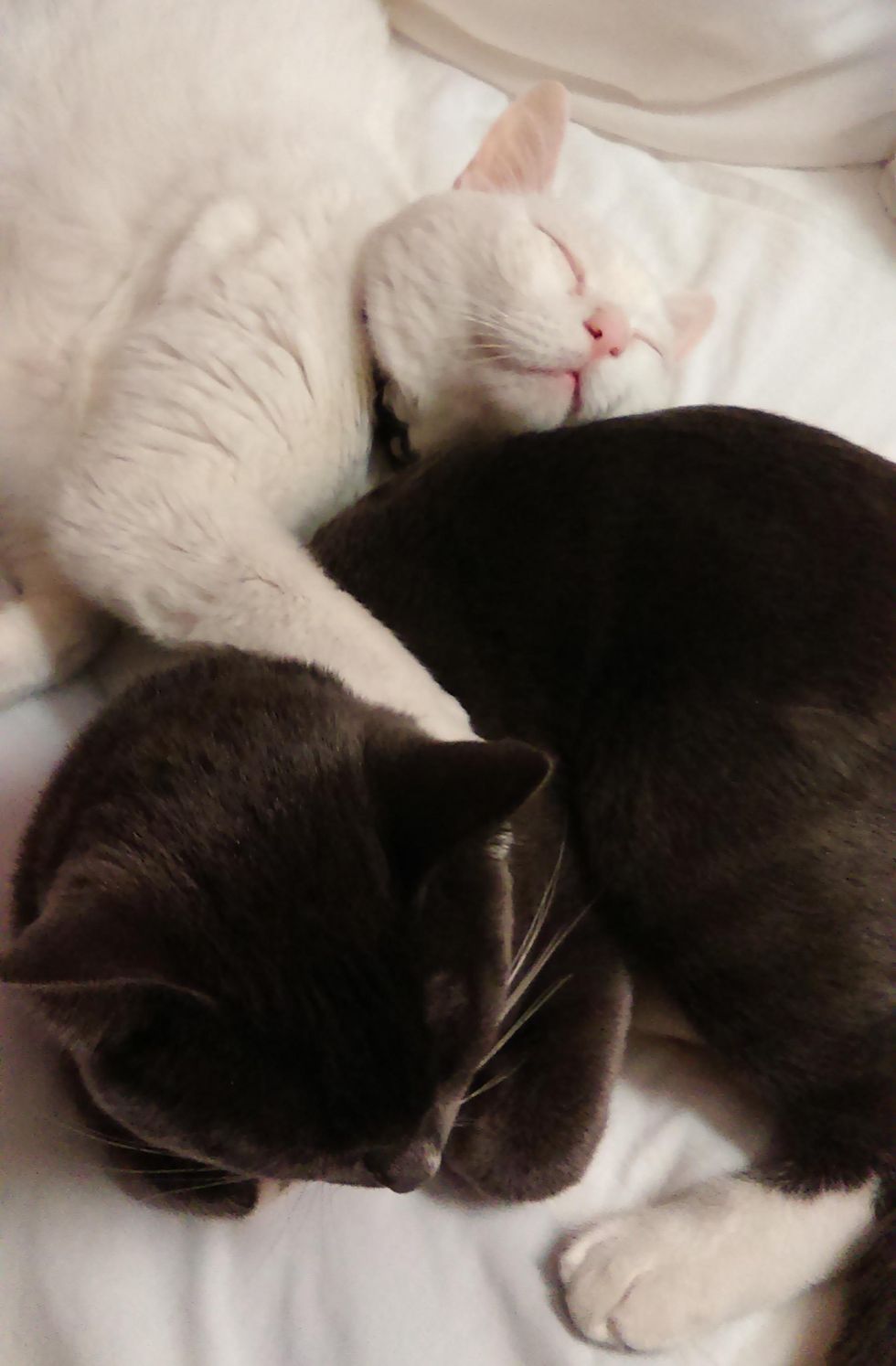 Darwin cuddling with his best friend PiperSupplied by Kellen