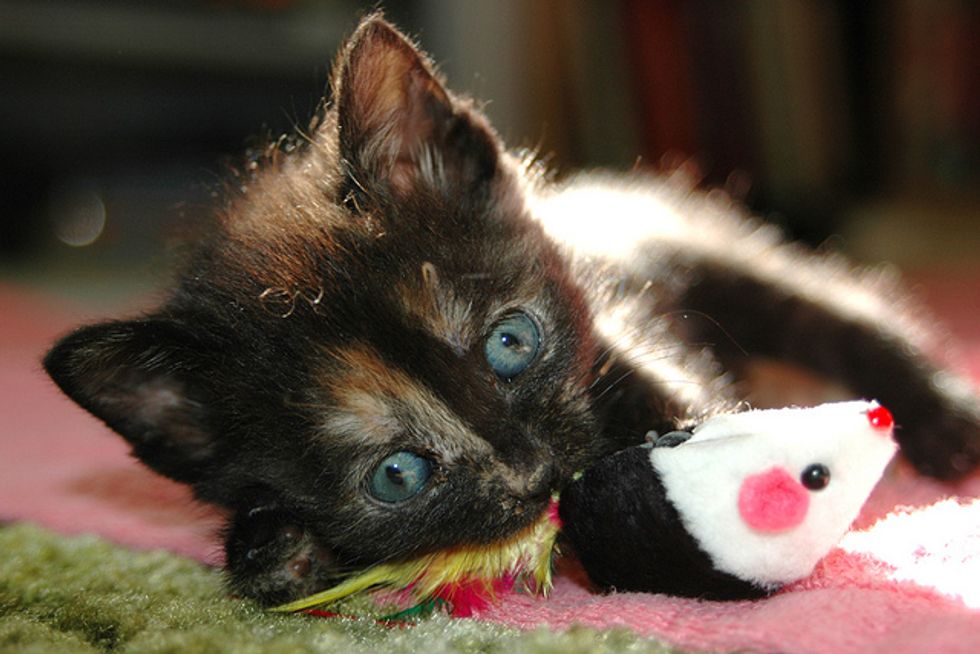 There are 5 total, 3 tortie girls and 2 black boys. They were humanely trapped by a good samaritan in my area who'd seen them with their stray mother, but unfortunately the mother evaded the trap and thus they were basically orphaned. They were about 3 weeks old when they were brought in to my local animal shelter, but of course, at that age they need way more care than a shelter can realistically provide, so I volunteered to foster them at my house for a couple months.

They did manage to catch some form of virus, which actually caused two of them to become so ill that they couldn't stand or walk for a few days. It was heartbreaking :( We weren't sure at first what was wrong and my roommate and I spent several days taking turns at not sleeping so that we could feed them every 2 hours and make sure they were still fighting. But they seem to have made a full recovery and are gaining weight and growing like tiny fluffy weeds :D.

All of them are incredibly sweet and it's like a stampede of purring whenever we go to play with them. The tortie girl without much facial markings is my secret favorite, 'cos she's so pudgy and sweet.

They are currently learning how to climb bookshelves, having previously mastered the fine art of climbing up humans, and their favorite activities include playing with a bit of string, carrying small scraps of paper around for no apparent reason, and begging for wet food despite already having it available 24/7.

They're due for their shots on Sunday, and they'll be going up for adoption just as soon as they hit two pounds in weight and can be spayed and neutered. Yay!

These 5 little puffballs will be ready for adoption in a few weeks. If you are interested in adopting them, feel free to contact Jess or their Facebook page:). They are located in the area of Bloomington, Indiana.