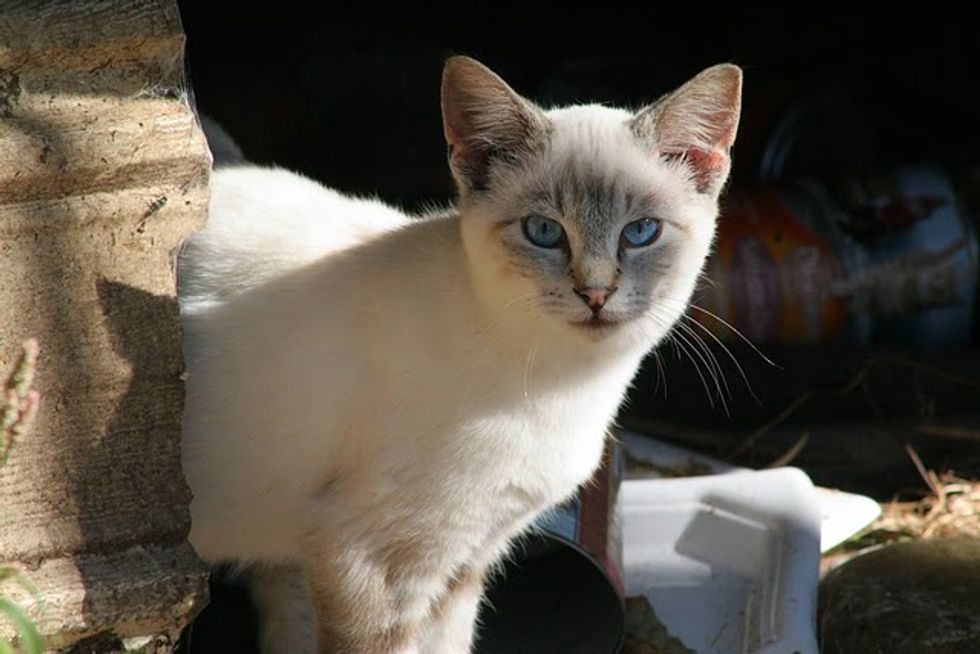 A Woman Started Her Own Feral Kitten-Cat Rescue Project

This is a story about a woman who became involved in the rescue, care and feeding of feral cats.

Having traveled around the U.S. in my career, living in places like Washington, DC-Virginia, Maryland, and Idaho, I just happened to end up back in my home area where I parked my RV at my sister's farm. I quickly discovered that dairy farm areas have a lot of feral cats: mostly it's because people dump cats around farms in the mistaken belief that they are good places for cats to live. They are not.

Although I was concerned about these kitties, I didn't really take an active roll in their rescue until a tragic event. On June 3rd, 2003, my beloved tabby cat who had traveled with me across the country and had seen much of America with me was viciously killed by an uncaring neighbor's dog. The loss of my cat was devastating for me. I was grief-stricken, I was filled with a desire for revenge... I still think about her a lot. The only thing I found that could assuage my grief and keep me from doing something terrible was to start helping the poor, suffering feral cats in the area, and that is why I became a rescuer (of sorts). So you see, it was my grief that drove me to help these animals. Perhaps it was a selfish reason after all - but now I really love and identify with these poor unfortunate cats.

I grew up in a family that was often homeless and filled with violence ...much like the lives of feral cats. We often didn't have food and we lived in a car. It isn't pretty. Except for the rare kindness of a random stranger, I would not be here today.

So when I look at the feral cats, I feel their suffering - and I also see something of myself, because I began life as a feral human; homeless and unwanted. I want to help them - they are living beings, after all, not objects. They deserve better lives than fate has dictated.

Inadequate though it may be, I do my part to make their lives a little better: I feed the ferals twice a day. I trap them regularly for trips to the vet to be spayed/neutered (all at my own expense). And when I capture sick kittens, I try to nurse them back to health and find homes for them.

There were a few undocumented years of helping ferals before I started my blog. Some of those cats are noted at my art site - this is an art project as well as a rescue project, after all. Eventually I decided that poor kitties deserved to be seen by the world, to give their lives meaning to a broader audience, so I started photographing and documenting them, giving faces to their stories and putting their lives into words. Thus we have the Feral Kitten-Cat Rescue Project. While I once had a great job as a web programmer and graphic designer for books and magazines, today I live pretty much like the feral cats I care for. It's kind of like going back to my childhood. We're all in this together.