Cat with 3 Legs Went Back to House Where He Discovered Kindness, and Found Family of His Dreams

A cat with three legs went back to the house where he once found kindness. It led him to a family of his dreams after years on the streets. 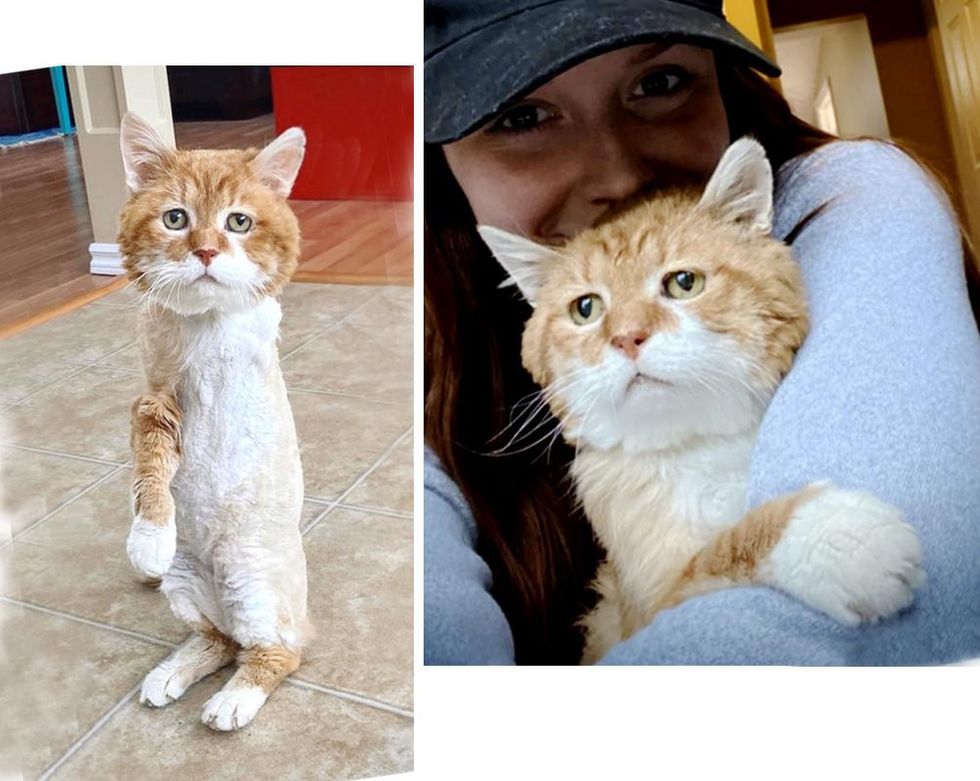 An orange cat named Bubby was wandering the streets until he came across a kind-hearted man eight years ago. The stray who was already missing an arm and part of his tail, sauntered into the man's kitchen and claimed it as his own. From that day on, the tabby kept showing up to the same residence and started hanging out with the man's feline companion, Seson.

The 3-legged wonder would call out for his feline friend at the door every time he came for a visit. The beautiful friendship really blossomed and went on until the day Seson crossed the rainbow bridge.

The man and his family fell in love with the orange cat from the day he stepped paw into their kitchen, but the stray was wary of being an indoor cat and adamant about being let outside after each visit. 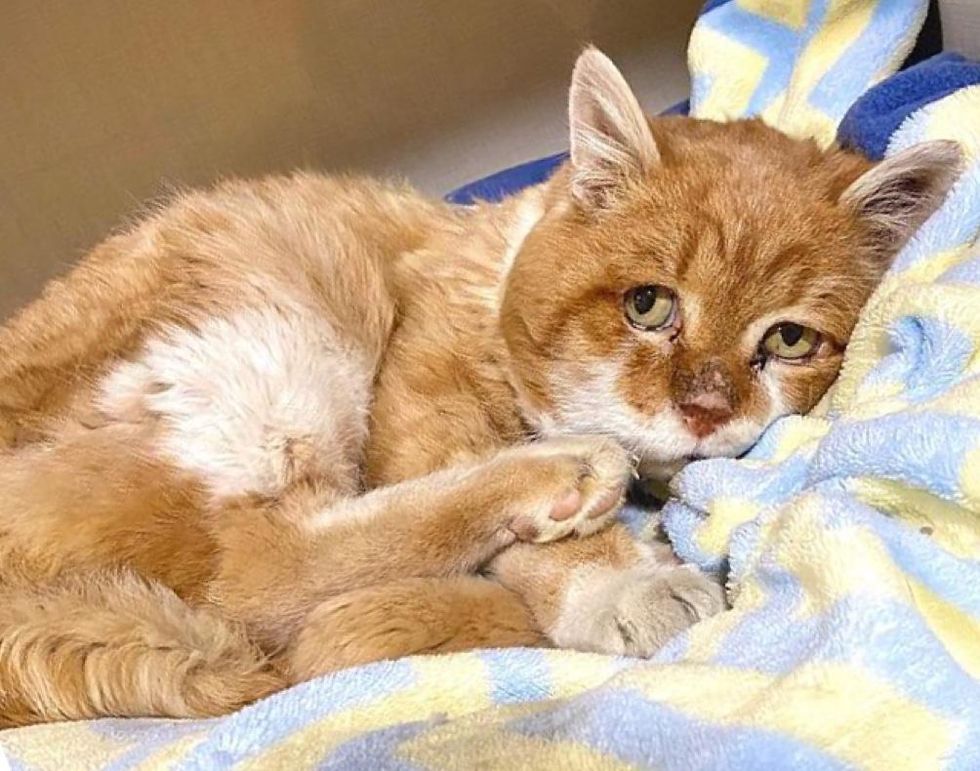 Bubby continued his regular visits with the man. He quickly earned himself his very own chair, a set of dishes, and touched everyone's heart in the family. The man took great care of the cat until he sadly passed away a few years later. Before his passing, he wanted to make sure that his beloved friend would be looked after.

Despite the family's very best efforts to find Bubby, the cat only returned to the house once after that. They looked everywhere for him and left food outside each day but only came back to find it untouched. Eventually, there was no sign of Bubby and they began to worry for the worst. 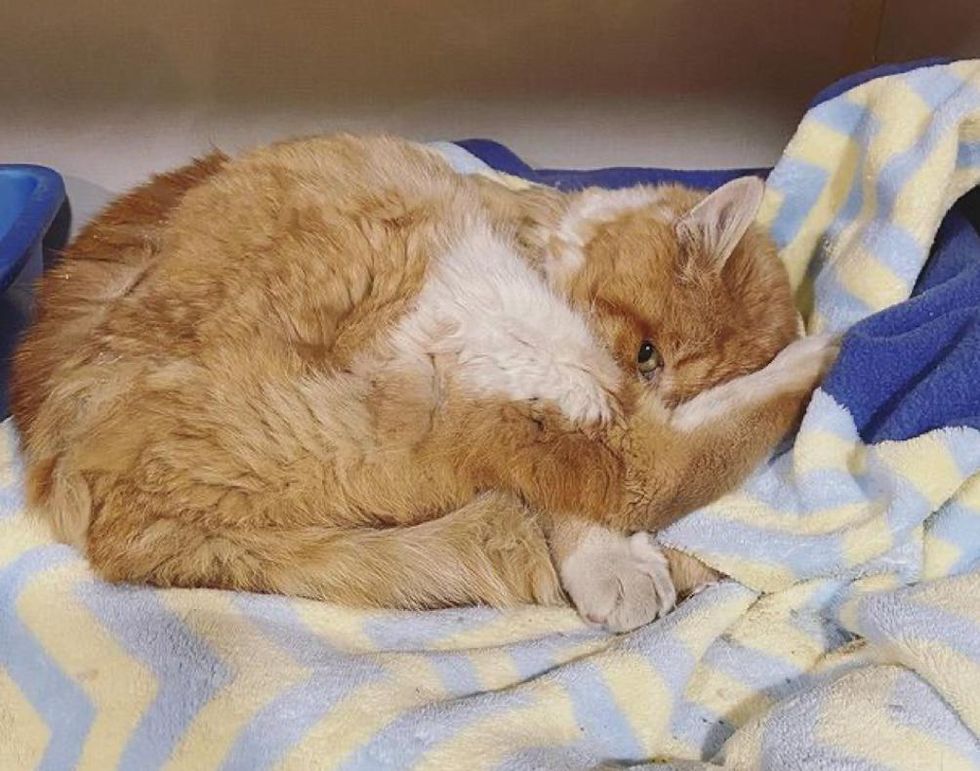 Around the summer of 2019, a familiar figure emerged in the neighborhood. It was Bubby the 3-legged cat -- he was en route to the very house where he once found kindness.

Ray Pinsent, who happened to be in the neighborhood, recognized the cat right away as he knew of the beautiful bond between the late man and his faithful cat. The orange tabby had grown older and weaker after years on the streets. It was apparent that those years hadn't been kind to him. 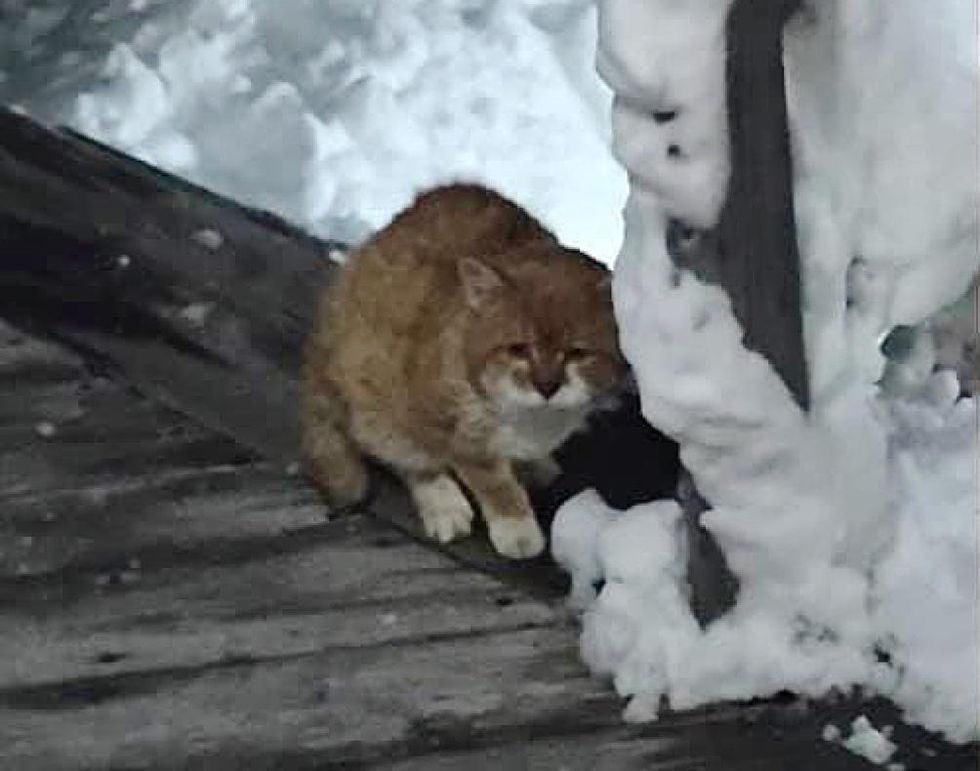 Bubby was rough around the edges and in need of medical attention. Ray began a rescue mission to get the cat to safety but after months of trying, the clever feline continuously evaded being captured. When the harsh Canadian winter arrived, Ray was losing sleep worrying that the cat might not be able to hang on much longer with each passing day.

He knocked on the door of the man's house that now had a new owner, and inquired about the cat. The homeowner only saw Bubby once in a while and didn't pay much mind. Ray pleaded for her to open the door next time when she spotted the cat, and he would come get him. 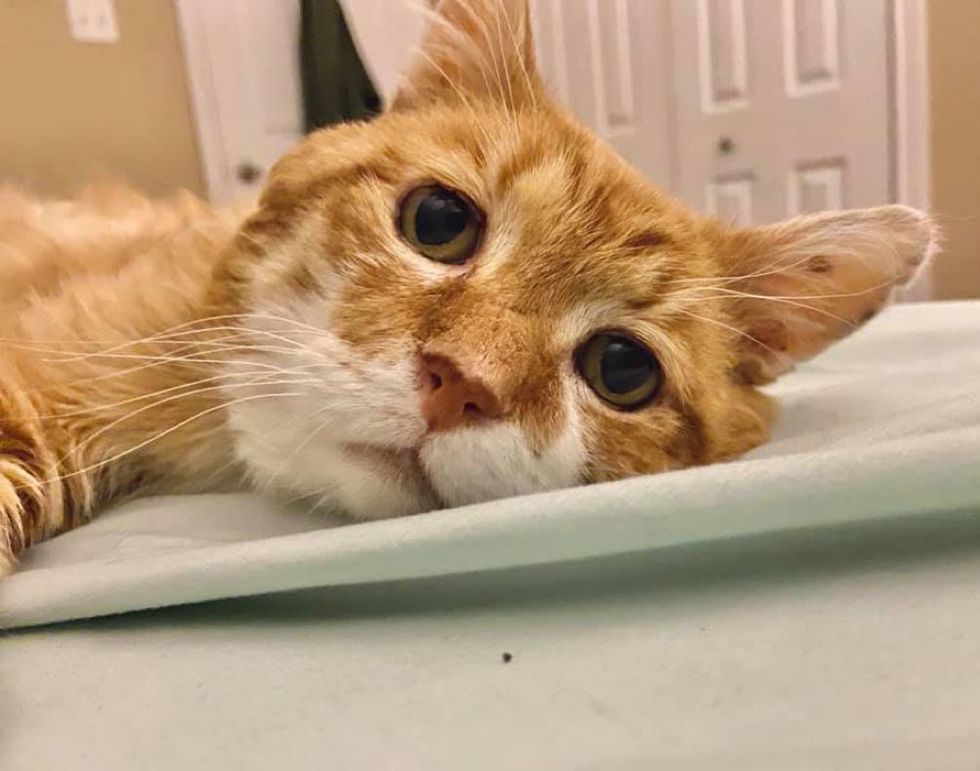 The very next day, she called back to tell him that the cat was there, sitting in her kitchen. Ray dropped everything at hand to pick him up and rushed him to Exploits Valley SPCA Adoptables. He wasn't sure if Bubby would make it, but the least he could do was give him a fighting chance.

"Bubby was dehydrated, beat up and all. He was sent to the vet and would not have survived another storm. The vet said he starting purring while on the exam table," Sarah MacLeod, volunteer of Exploits Valley SPCA Adoptables, shared with Love Meow. 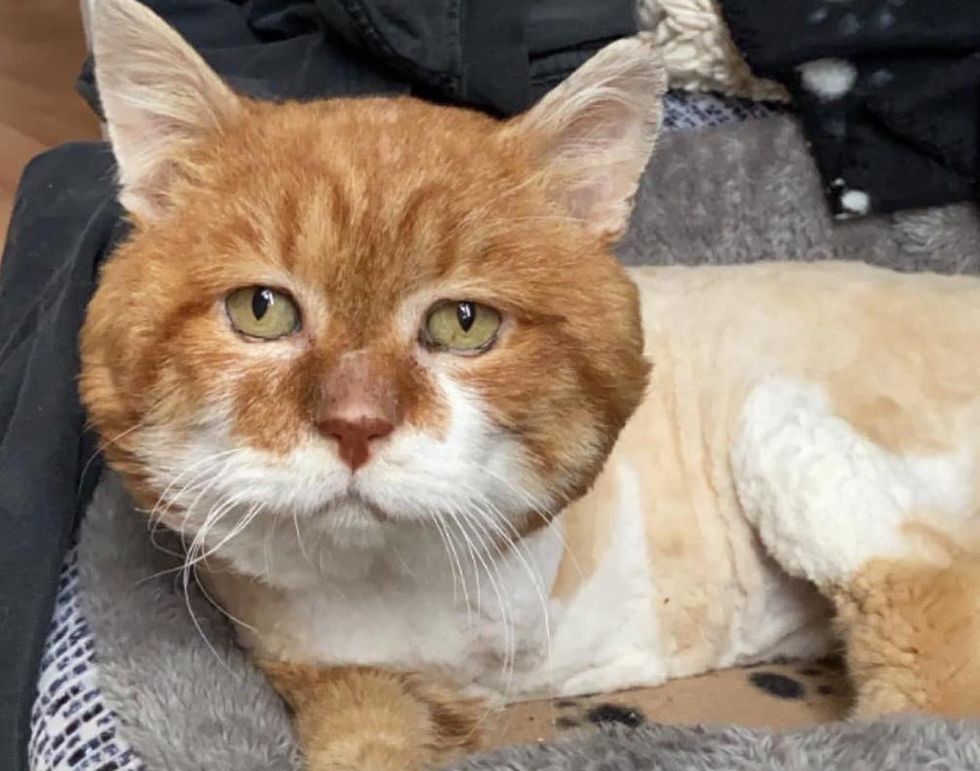 While the orange tabby started his healing process at the shelter, the late man's daughter came across a post asking for more info about the cat. "She came forward and told me the story of Bubby. She cried when she saw him and brought his dishes to him. Bubby now eats from the dishes he once did at the man's house."

Watch Bubby the cat in this sweet video:

Sarah offered to foster the sweet orange cat but deep-down, Bubby had crept his way into her heart long before that.

"I knew I wanted to keep Bubby forever before I took him home," Sarah told Love Meow. "We were't in the market for a cat so my boyfriend needed convincing." 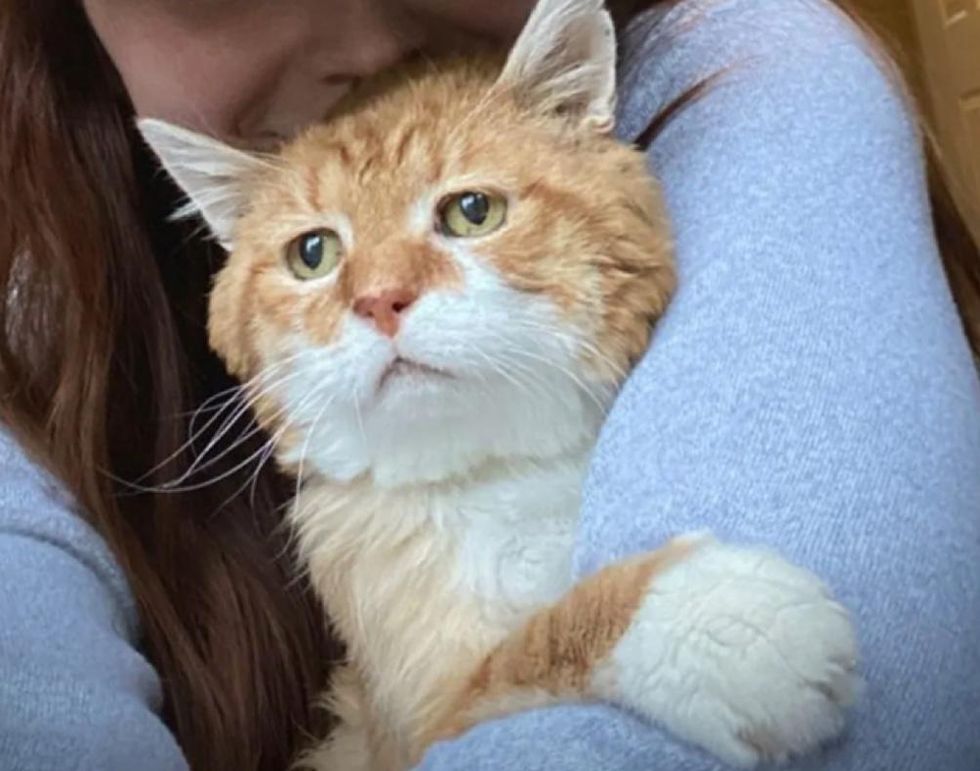 But that didn't take long as the tabby decided their home was where he belonged. "I came home from work to find Bubby and my boyfriend both on the floor. Bubby had crawled onto him. Neither one of us had seen him do this before, but I knew he won him over."

Despite having three limbs, Bubby doesn't let anything stop him. He is smart, charming and knows how to get what he wants. All he needs to do is stare at his humans with those adorable sad eyes, and the negotiation is over. 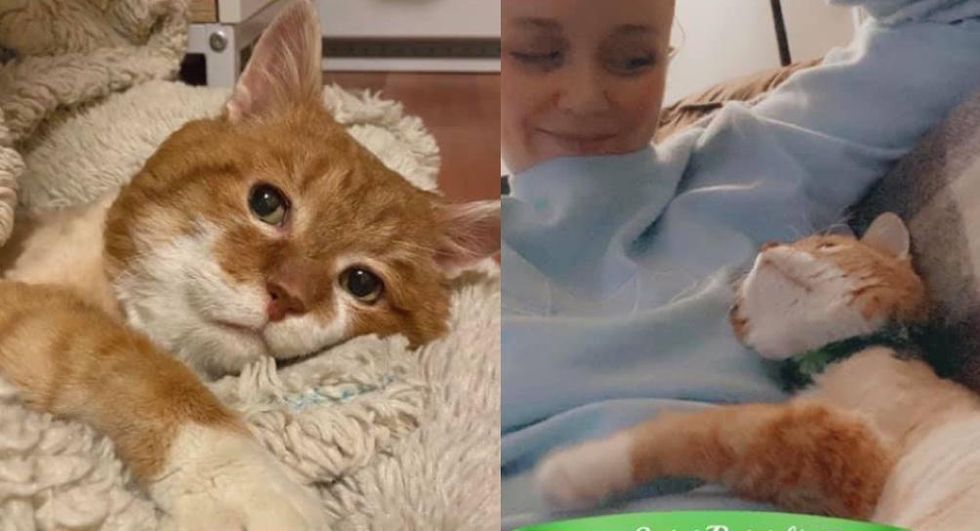 Now, Bubby has a big family that adores him. He is not the only orange cat in the house and has a canine friend that he follows around like a loyal companion. The resident cats have taken him under their wing and shower him with love and cuddles.

"Bubby with his sad human eyes was loved once before and he is now again. He purrs the minute he wakes up in the morning and as he goes to sleep every night. He's never asked to go outside once. He must know that he's home now, for good." 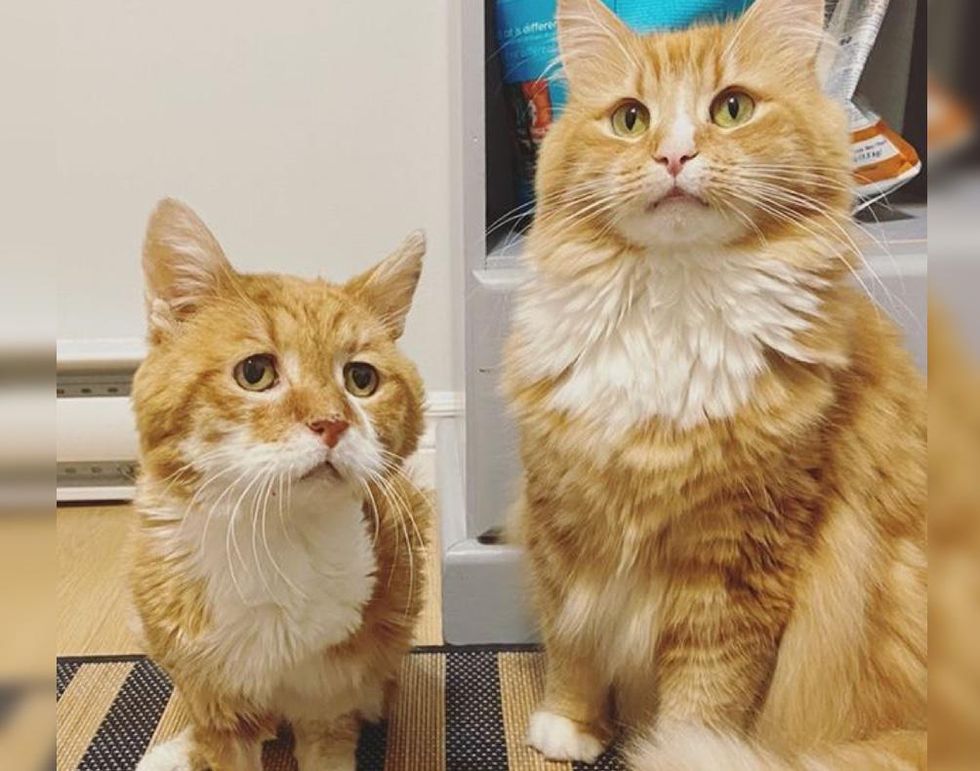 "I feel lucky to have him, he'll be extremely spoiled for the rest of his days." 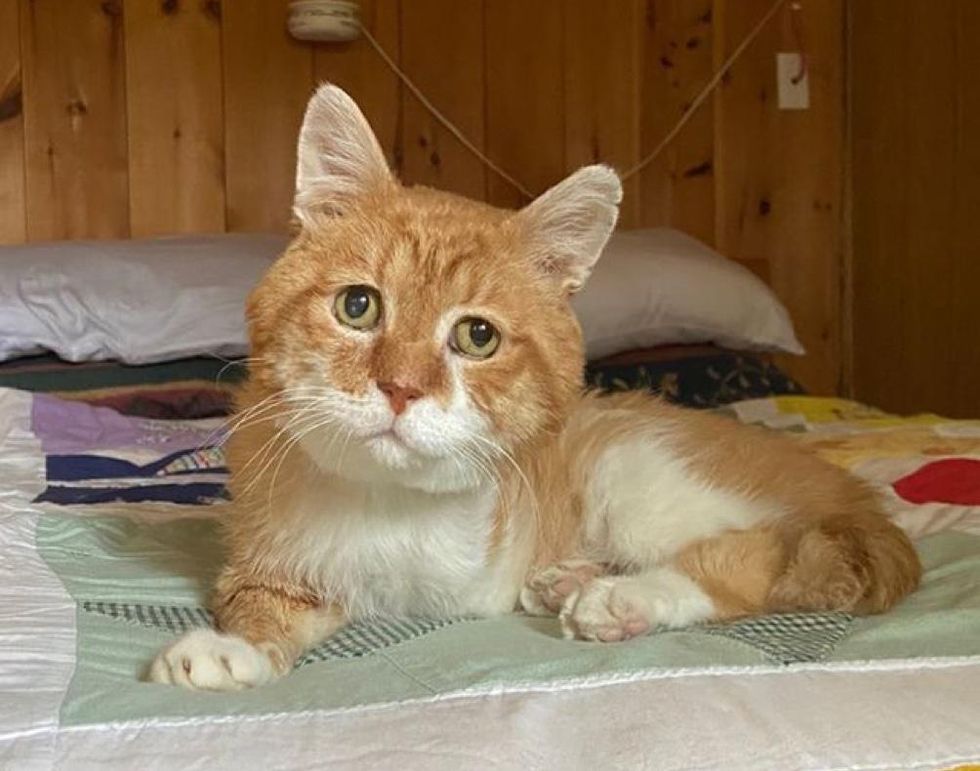 Related story: Cat Showed Up at Family's Door and Asked to Be Let Inside After Spending Years on Streets