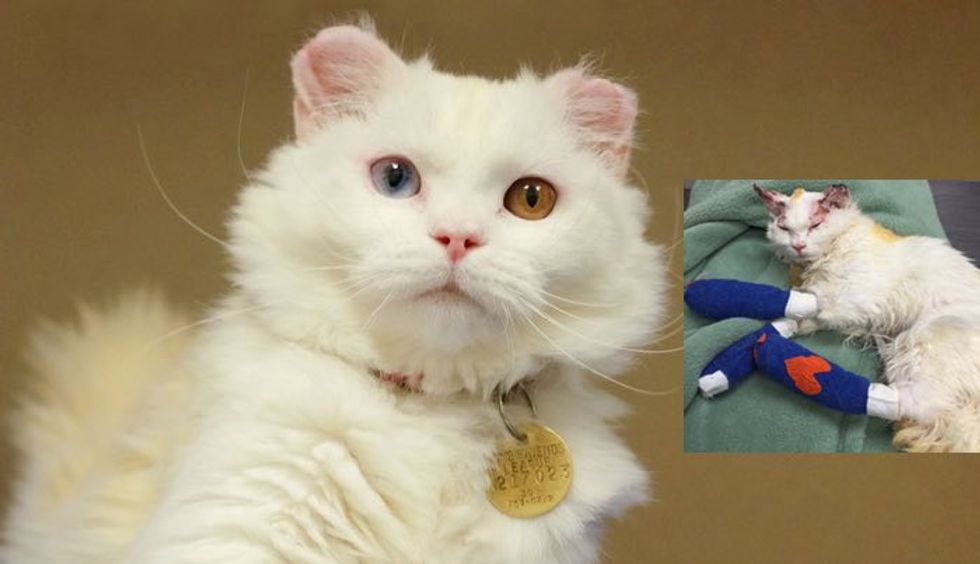 Phoenix the cat suffered burns, but found love and a forever home with someone who understands her completely because she's also a burn survivor.

Phoenix was 10 months old when she was found near the laundry room of an apartment complex. She was taken to the Dumb Friends League in Denver, Colorado for emergency help. They suspected that her injuries "may have been caused by hiding under a clothes dryer to stay warm."

"At that time, it appeared her burns were mostly superficial. But after a day or two they worsened, which is often the case with burn injuries," Megan Rees of Dumb Friends League told Love Meow.

Despite her injuries, Phoenix rose up and never stopped purring.

"Since the day she arrived, Phoenix was nothing but sweet with everyone that came into contact with her,

"Our chief veterinarian performed surgery to remove the burned skin and he did a skin graft on her ears. Despite all her pain and discomfort, Phoenix would purr throughout her veterinary exams and seek affectionate from all of our staff who were helping to treat her," Rees told Love Meow.

After two months recovering in a foster home, look at Phoenix now!

She is truly a special and resilient cat.

Gloria has a story that is similar to Phoenix. At 16 she was involved in a household accident that left her face, neck and hands seriously burned. When she heard about Phoenix, she immediately felt the connection with the kitty.

Though she wasn't looking for a cat to adopt at the time, after reading Phoenix's journey, she said: "When something is meant to be, the world gets real small."

"When Phoenix and Gloria met for the first time you could tell there was an immediate connection. Phoenix curled right up in her lap and that where she stayed during their whole visit, until they left the shelter together. It was the perfect match!" Rees told Love Meow.

"Her story is a powerful reminder of the incredible resilience of animals, and how compassion and commitment saved the life of this precious kitten."

Phoenix cuddling with her forever human!

Share this story and help a rescue kitty find their forever loving home!