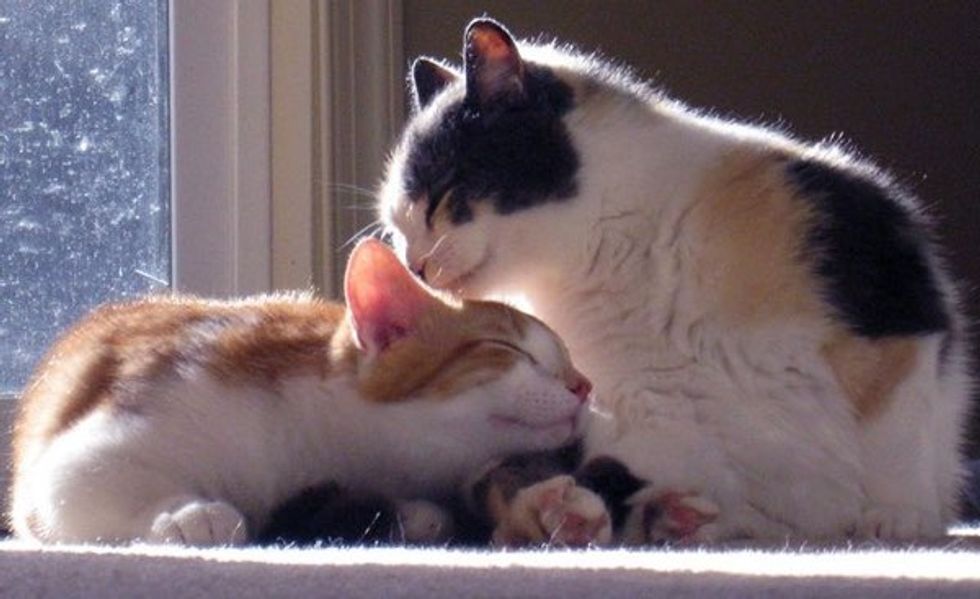 Feral Cat Mother and Son, Their First Year in a Loving Home

Two feral cats, a mother and her son, had been roaming around a neighborhood for over a year. A family decided to help them out. This is how far they have come since then. It was with a lot of patience and love. "I don’t usually do albums, but it marks a year since this choice and I just can’t believe the first picture compared to the last picture," they wrote. (via imgur)

"The Calico had been seen around the neighborhood for over a year, but no one knew about her kitten until we saw it run from behind our air conditioner back to wherever they were sheltered (later found to be under a neighbor's rear, elevated patio). We were feeding them from that point on regularly, and had a security camera pointing out at the area to observe them."

First trip to their new home: "After a major snowstorm we decided we had to at least trap them for the sake of getting them shots and spayed/neutered & perhaps bring them to a no-kill animal rescue place near us. Thankfully (and surprisingly), mom and and son both tested perfectly healthy. (Aside for the expected fleas, which were treated) We decided at that point we had to take them in, and mom was spayed immediately following her clean bill of health."

"We have an unused room which was where our two new additions stayed until we were certain the fleas were dead and the standard "De-worming" medicine we were provided would be effective. They hid under the dresser in the room, but were very quick to use the litterbox we provided for them. They ate regularly, and our security camera placed in the room caught many instances of them playing around overnight. Mom hissed at us a lot but never attacked. Her son was just very timid, but we got a wand toy for him which helped with his reluctance toward movement."

"When the sun began coming in the back doors in the spring, no one was happier than mom & son. They basked in the sunbeams, leading to this amazing picture we absolutely love. They still ran from us if we got too close, but at this point they were camped out under our bed. We found that really funny, as they were scared of us, but spent a lot of their time sleeping directly underneath us."

1 Year on Son: "Son is still very scared of us when he is out from under the bed. He comes out a lot and goes everywhere in the house and plays with the other cats. When he is under the bed, we can reach in and pet him non-stop and he purrs and rolls around. Our belief is he still believes at this point he is a very tiny kitten, and is not -- in fact -- an 8lb tomcat."

1 Year on Mom: "The biggest surprise is Momma, Momma comes out every time we go upstairs in order to be pet. She's still very timid when we're "vertical", but when we're sitting on the steps she rolls around chirps at us to be pet. She just went for her booster shots, and has gained 1.5lb since we took her in and has one of the smoothest coats our vet has seen."

"There's still a long way to go with both of them, but we are both very patient and loving with them and are thankful every day it is freezing, snowy, windy, rainy, etc. that they are healthy and warm.

Taking in ferals is not something done for immediate love and companionship. For us, it's just the knowledge they are safe and healthy, have other cats they get along amazingly with (thankfully), and generally appear happy with their new situation that make us happy to have them in our family."