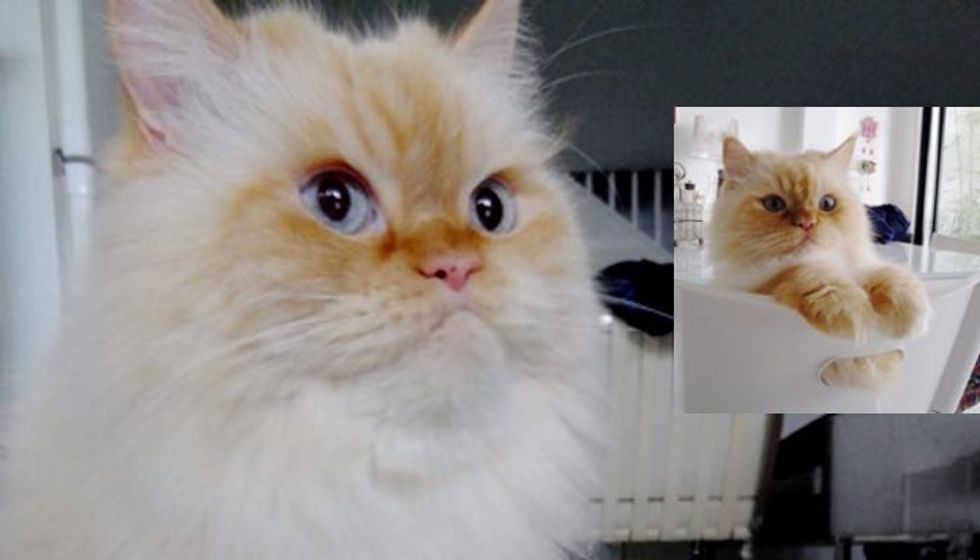 Fluffy Himalayan Cat was Sick and Isolated in Shelter But His Forever Home Healed Him!

This beautiful fluffy Himalayan was rescued as a stray and brought to the shelter where he stayed for a long time in an isolated room, waiting for someone to take him home. The moment a couple found him, he stood up and begged to be adopted.

Ngaire and Gannon from Sydney, Australia were looking for a cat to adopt. When they decided to take a chance on a cat that was sick, they met Mr. Leonardo Llyod Jinks.

There was an area in the shelter where cats with cat flu were kept in isolation and generally had a harder time finding homes.

They asked to see those cats. "Next we were taken to an air conditioned portable building on the outskirts of the shelter. When the door opened around 20 cats in individual cages stood up and started meowing loudly, all of them desperately competing for our attention. We couldn't believe our eyes... It was like finding the pot of gold at the end of the rainbow, " Ngaire told Love Meow.

Then they met this fluffy boy!

"Instantly my eyes were drawn to the biggest, fluffiest most amazing cat I'd ever seen. He was so big that when he stood up, he took up the whole cage and he was staring at us with huge baby blue eyes and almost human like eye contact. Straight away I said to the attendant excitedly 'what about this one ? Can we take it out of the cage?' So we took him out, patted him and he rubbed his head on our legs with enormous strength. Then we put him on the other side of the room and called him, and straight away he ran towards us like a dog. That's when we knew he was the one," Ngaire said.

"How could anyone give away such a beautiful cat?... how did he end up here?

"All the attendant could tell us was that he was 4 years old, a male flame point Himalayan and had been living in the shelter, sick for around a month. and the person that surrendered him had found him in their back yard eating out of their cats' bowl and he had been dumped or became lost..."

At the time, Mr. Leonardo Lloyd Jinks was sick and stayed in isolation with other sick cats.

"He had cat flu and he was coughing, sneezing and wheezing, but we knew once we took him home, gave him his medication and he was in a loving stable environment, he'd recover in no time. And he did. He completely recovered almost overnight. In fact later that day he was snuggled up on the lounge next to us like he'd lived there all his life," Ngaire told Love Meow.

Sometimes he forgets to put his tongue away.

He owns every paper bag in the house!

It's hard to believe such a gorgeous cat would end up roaming in someone's backyard, but a second chance not only healed him, but also brought back his true personality.

"So adopt don't shop and don't forget to ask to see the cats with cat flu at your local shelter, where we found our Himalayan flame point pot of gold."

Share this story and help a kitty in your local shelter find their forever home!