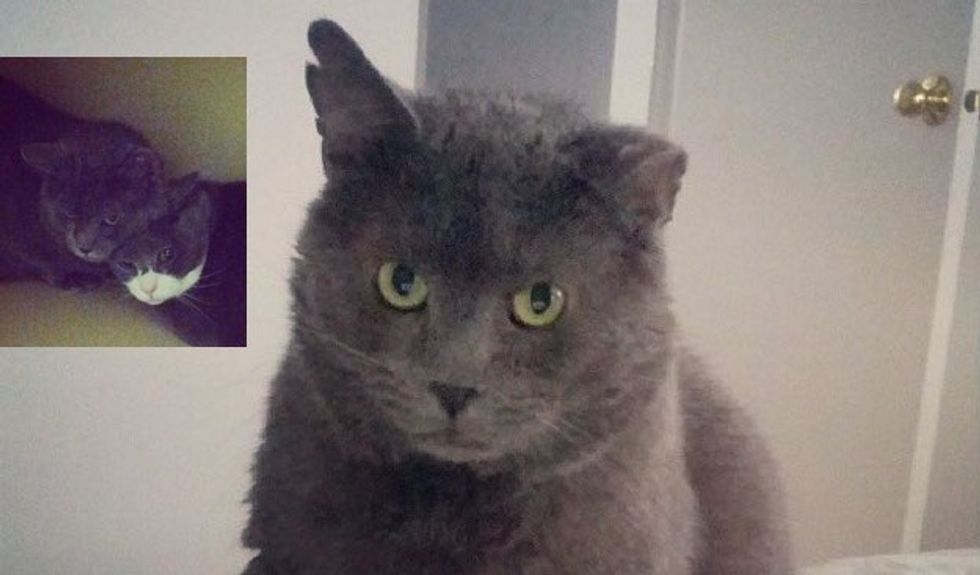 From Fear to the Happiness. The Rebuilt Life of a Rescue Cat

Meet Walter Benjamin the cat! He came to his new home as a very scaredy cat but is now the happiest cat he can be.

Walter's human wrote: "This is Walter on the day I adopted him. A few weeks prior, he was found on the streets covered in wounds, gashes, and burns all across his chest. The tips of his ears were gone, likely due to frostbite, and one ear had a perfectly symmetrical hole punched into it, which causes the ear to droop. He responded to any human contact by cowering and shaking uncontrollably." (imgur)

"The first few weeks of being in my apartment, he did nothing but hide during the day and cry at night... he felt that as long as he was hiding his head (and couldn't see me), then I could not see him. I didn't want to ruin it for him, so I pretended not to notice him when he had his head stuck in a corner somewhere."

"I adopted him with another scaredy cat, and they bonded rather quickly: hiding from me in the cupboards, squishing together in corners, and regarding me as their potentially abusive captor."

"Finally Walter became curious about me. As his wounds and health issues began to fade, he started sleeping at the doorway of my bedroom, and eventually made his way up to sleeping at the edge of the bed. He would hesitantly approach me for pets, while making sure to swat at me whenever I was done, to let me know that he could handle his own in a fight against me."

A year after adoption, "he would still flinch when I touched him, but he was at ease and loved hanging out with me and being affectionate. On his terms, of course."

"Fast forward three years and Walter is my favorite freeloader. He only wants to laze around, get belly rubs, and scream at me for food and treats. "

Walter is such a cool cat. He helps his human with his computer work.