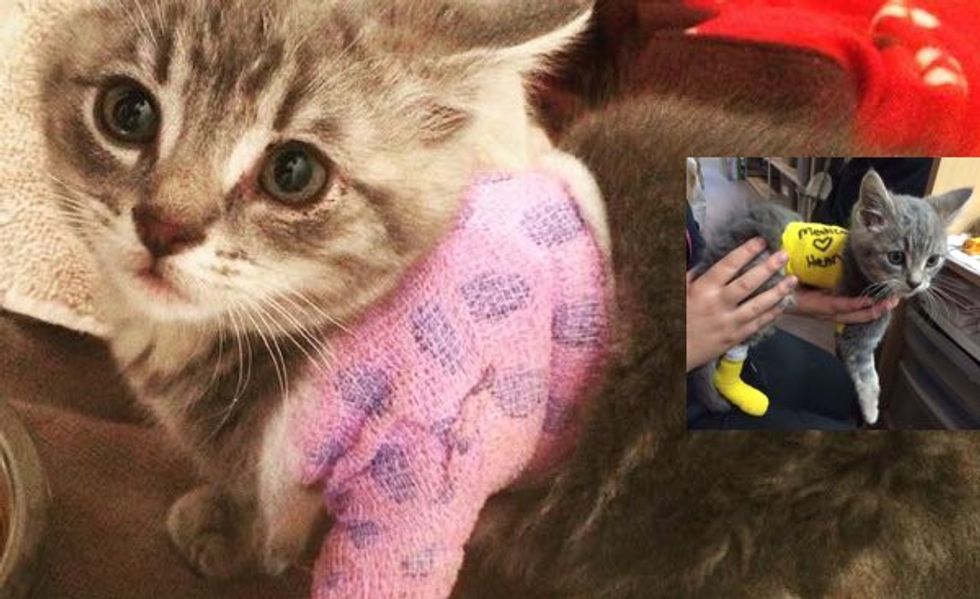 Little Henry the kitty is a survivor and a fighter! "He doesn't know he's broken!"

Edmonton Humane Society shares his story: "This little warrior cat is Henry. One day this tiny grey kitten was found at the side of a highway, severely injured after being struck by a vehicle and left abandoned. Kind souls brought him to an emergency veterinary clinic, where he was bandaged and put on IV. Because he was a stray, he was transferred to Edmonton Humane Society.

When Operations Supervisor Mariah took a look at his injuries and held his quiet body in her hands, she wondered whether this kitten was going to pull through. There was a gaping wound and exposed tendons on one of his skinny hind legs. One front leg was badly dislocated, and there was obvious head trauma. It was love at first sight, and Mariah decided to name him Henry.

The EHS veterinary team checked Henry and made him as comfortable as possible as he faced his critical recovery period. There was a definite possibility that Henry's injuries were too much for his tiny body to overcome.

When morning came, Henry showed his true spirit - he is a warrior! Overnight he had eaten well and was already vocal about wanting some love and attention. It was a great sign!

Today, despite his casts, Henry is a very lively little kitten. He’s a flurry of energy, completely oblivious to his injuries. Staff have commented 'He doesn't know he's broken!'

Henry's foster sister who is always there making sure Henry is resting well.

Henry is currently in foster care and getting help and a ton of love from a team of caretakers. This little guy absolutely loves life!

WATCH VIDOE: Henry loves to play. No cast can slow him down!