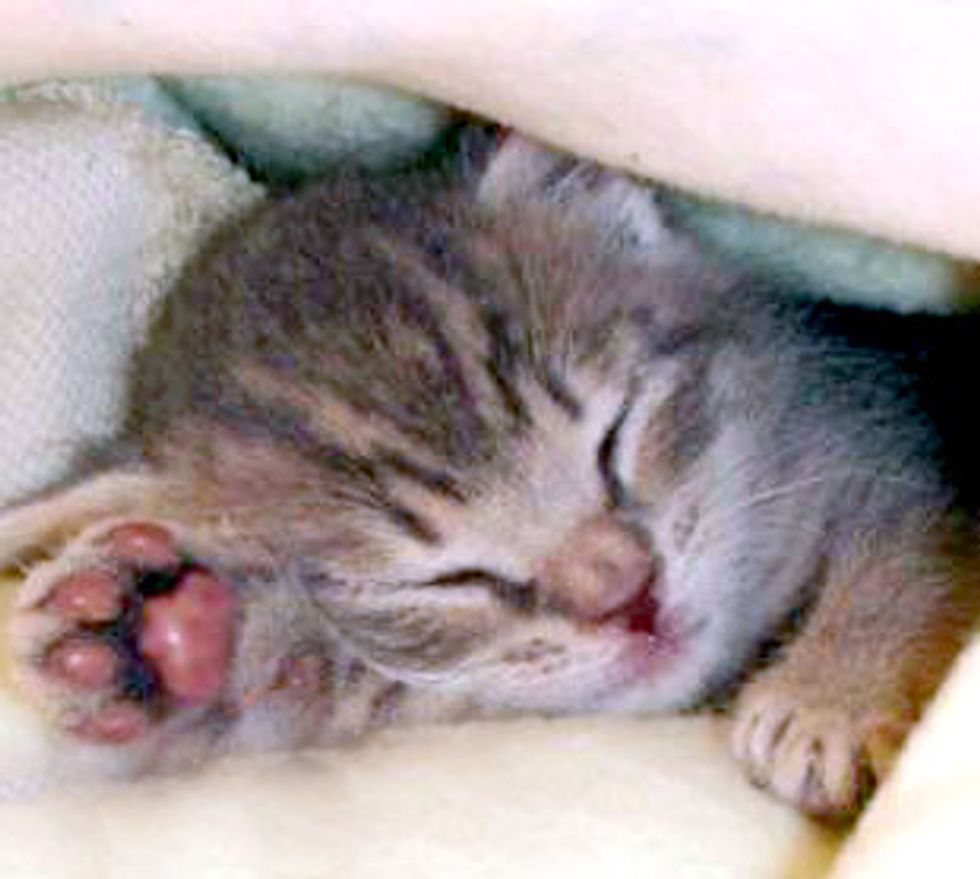 Kara was a little orphan when she was found by a shelter in New York. "They do not keep kittens that can't eat on their own.... I had some time over the 2008 holidays and decided to swing by the shelter and pick up some fosters," said Stephanie, an animal rescuer and foster parent.

"Kara was a solo orphan so she was really independent, but also super snuggly. She is also the type to do whatever she wants."

When Kara met Stephanie's cats for the first time, she was excited. "Eko loves to follow her around and groom her. She likes to try to swat and bite them, but I don't think they can feel it she is so small.... Kara is having a blast exploring the apartment and experiencing all the wonderful new smells! One of her favorite spots is Eko's carrier.... Her other favorite spot is to play with and sleep on my feet," Stephanie wrote on her blog.

In just 5 weeks, Kara could run, play with cats, use the litterbox on her own and was still "snugglerific."

"She is a purring machine and an excellent snuggler. She greets me with a face rub when I walk in the door and sleeps on my pillow at night curled up next to my face."

When Kara was leaving for her forever loving home, it was a bitter sweet moment. "It was a happy day and a sad day saying goodbye to little Kara.... We all said our tearful goodbyes to Kara and sent her on her way to her new home."

Kara is doing exceptionally well at her new home with her new mom Alyssa and a new sister named Hazel. "She is the dearest and cutest thing. She is our little punkydora, made of spring breezes. We love her to bits and pieces, and she and Hazel are great friends."

Kara also found her favorite toy and became quite obsessed with it. "She loves Da Bird beyond what we thought was possible. We have to keep it hidden in the closet when we are not flying it around for her, because otherwise she will obsess about it all day long. Even with it in the closet, she asks for it religiously every morning and evening. Meow. Meow. Meow. Again and again till we finally relent and bring out the best toy ever for a romp," said Alyssa.

"Kara and her sister, Hazel, are still great playmates. they have daily romps and battles, tearing all around the place. Kara can be really funny about Hazel sometimes, though, and it seems that she forgets who That Other Cat is until Hazel gets close enough to really check out. She's always ready for some monster intruder to come around the corner instead of her sister who she lives and plays with every day. Total goof."