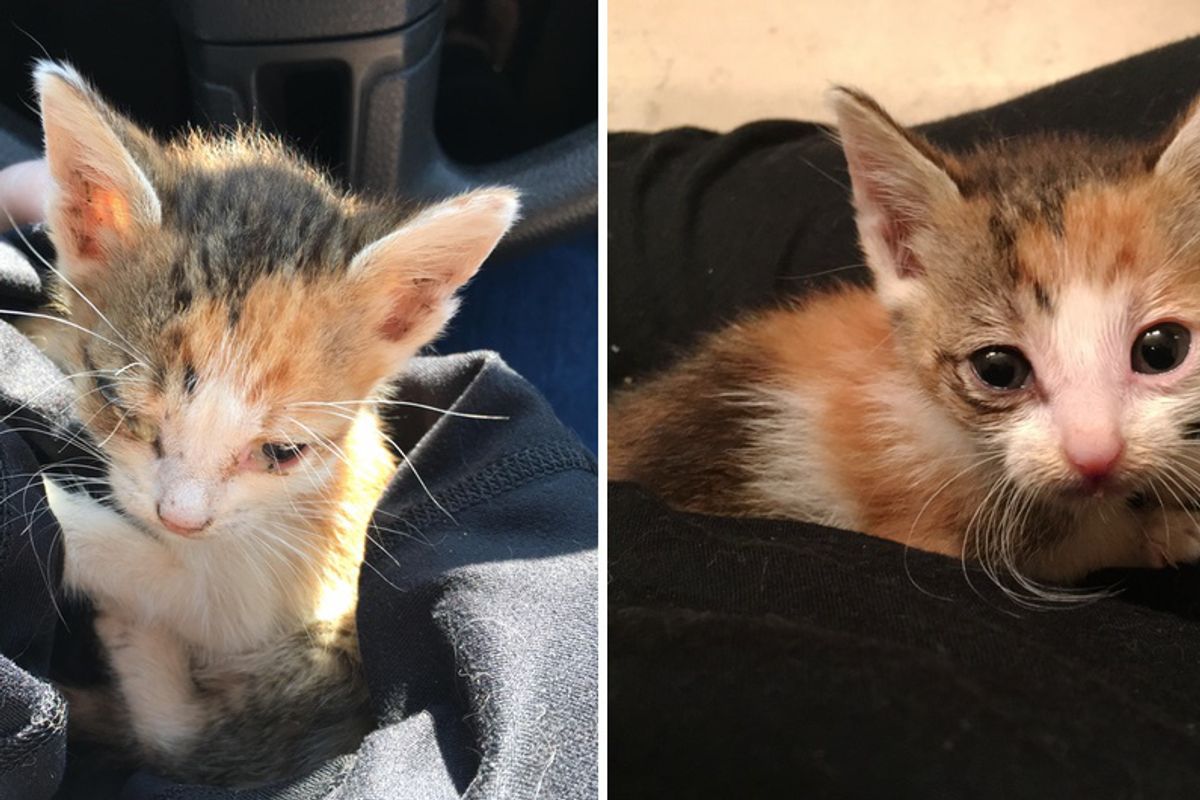 Kitten Given 50/50 Shot for Survival But Woman Determined to Save Her, Now Months Later...

A four week old calico was found outside an office. They weren't sure if she would make it through the weekend, but a young woman was determined to do whatever she could to save her. 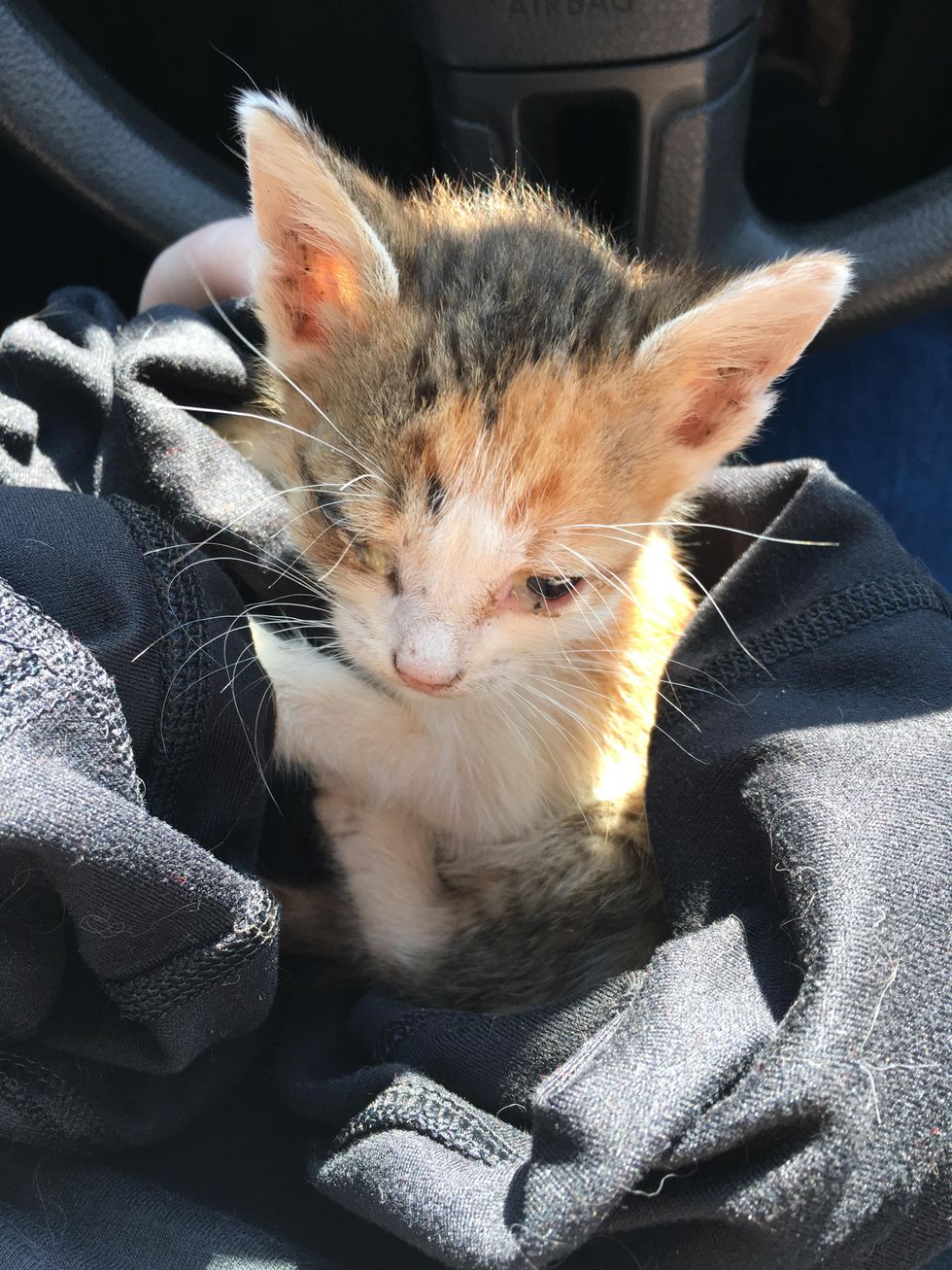 "One of my coworkers found her outside of my office on April 7. I'm the resident cat lady so they called me to come down and see her," reddit user hrtofdixie said. "She was skin and bones, covered in briars and brambles from being in the bushes and her eyes were crusted shut from an infection."

She immediately took the kitten to the closest vet clinic. As soon as she put the tiny furball in her arms, the frail kitten started purring with everything she'd got. She weighed just half a pound and her temperature was dangerously low.

"We got some ointment for her crusty eyes, a sign of infection, and she was prescribed a pretty healthy dose of antibiotics." 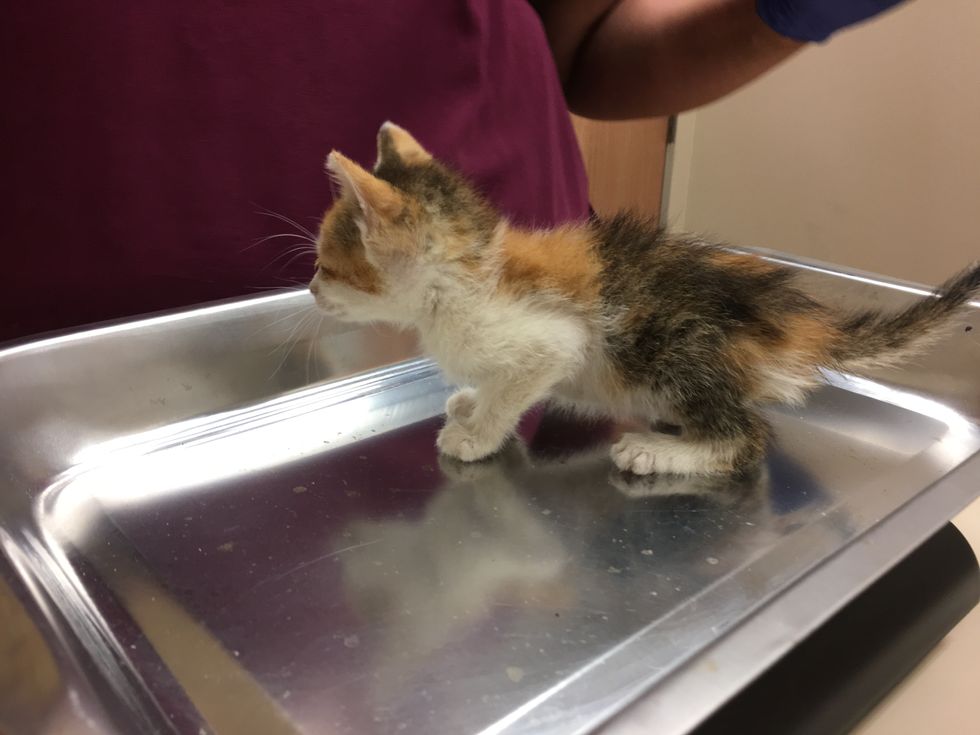 That night, the kind woman didn't get much sleep caring for the kitten. She made a makeshift nest with a large storage tub and placed a heating pad, a comfortable bed and plenty of blankets inside.

"I was up with her every few hours making sure she was ok. She didn't eat very well at first, probably just trying to rest. The vet gave her a 50/50 shot of making it through the weekend, but I had to at least try." 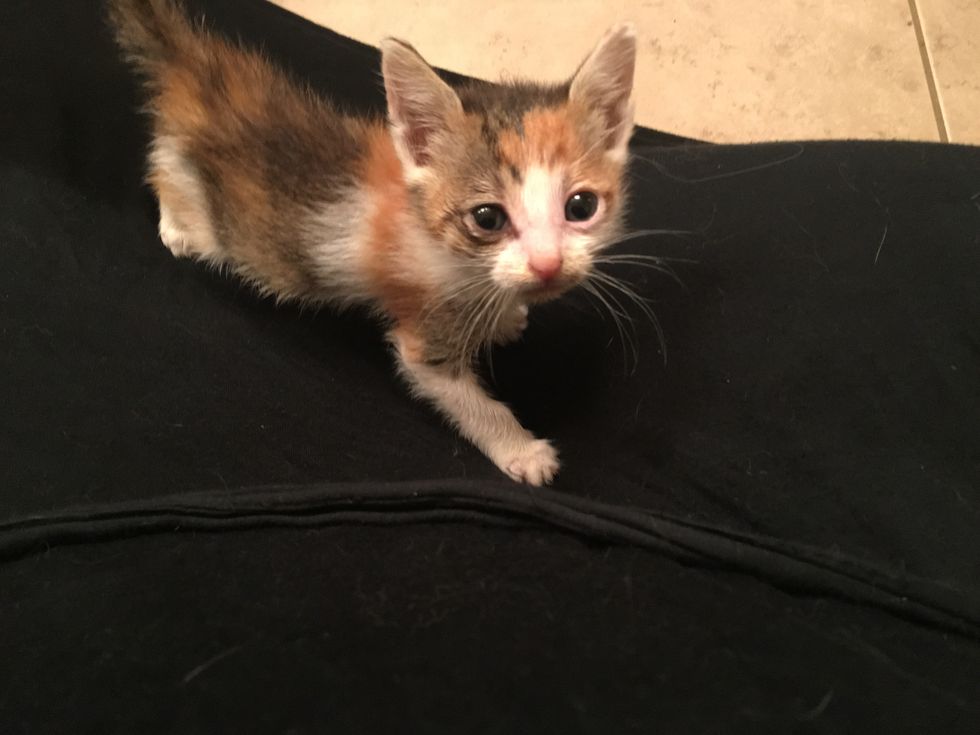 "After being up with her every couple of hours through the night, she was starting to come to life. We cleaned out her eyes (didn't want to touch anything until the vet said it was ok) and began treating with some ointment and antibiotics."

Finley climbed in her human's lap for some snuggles. She purred up a storm as if to thank her for saving her life. 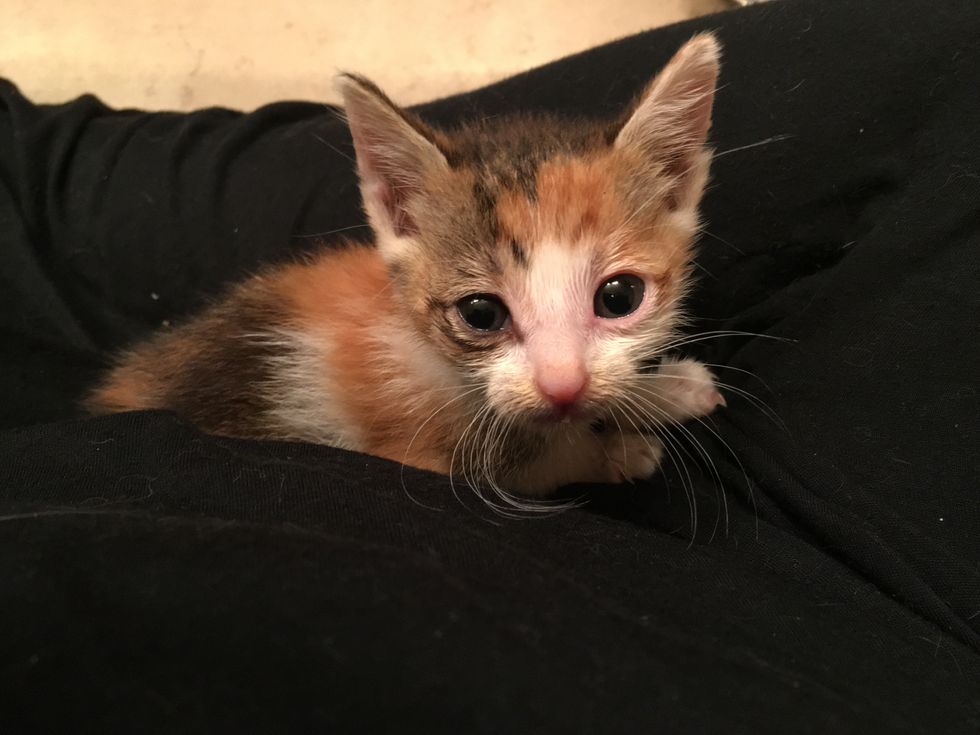 Over the next couple of days, the kitten craved more attention and cuddle time, so they wrapped her up like a purrito to keep her comfortable and warm. With constant love and care, her eyes quickly cleared up.

"After some steady food and some forced water from a syringe (she wasn't interested in drinking herself), she was feeling better." 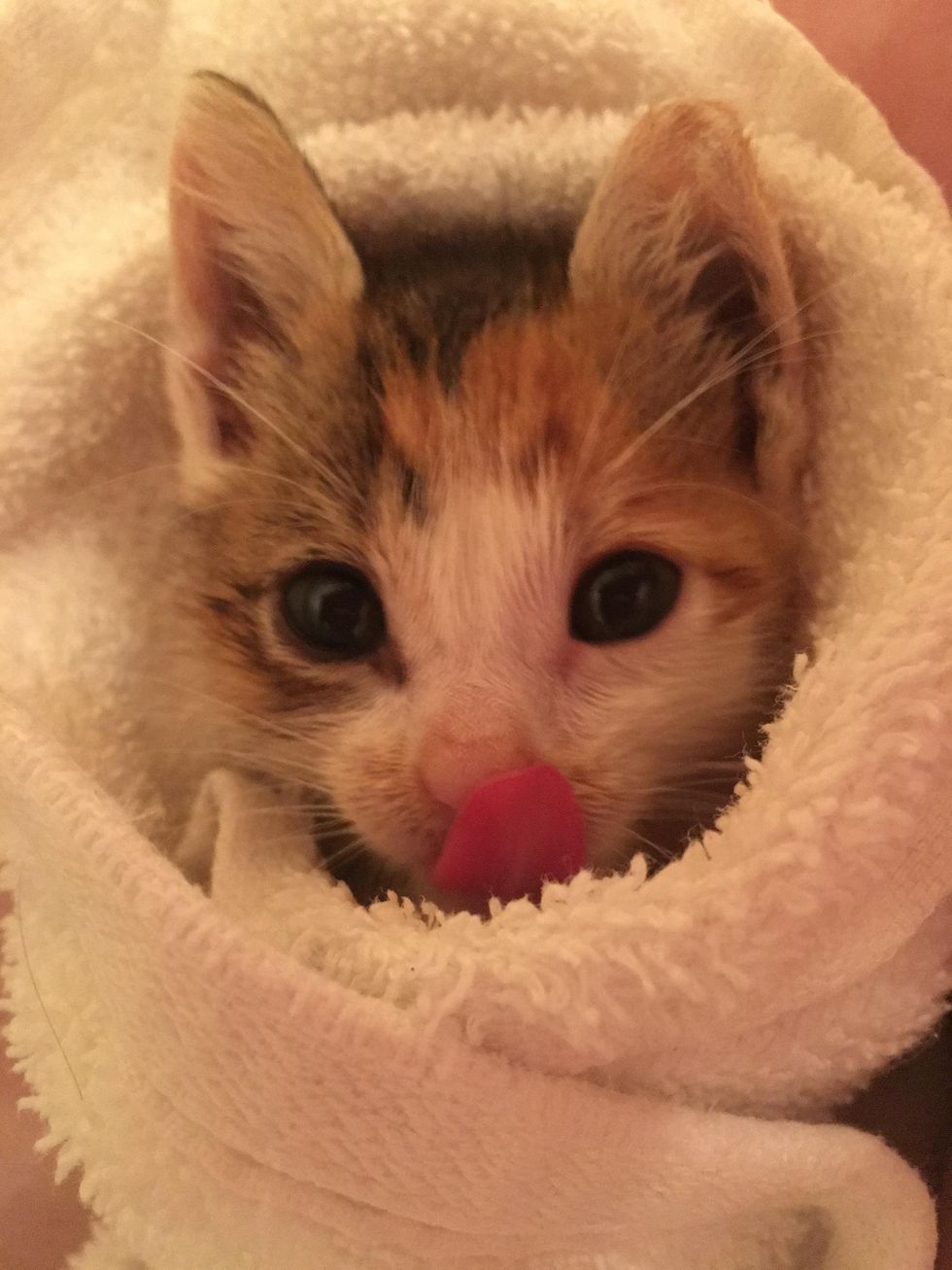 Once she was healthy enough, they gave her a much-needed bath with Dawn soap to remove the fleas.

"She actually enjoyed the warm water… Little girl was so happy to have a full belly and no more dirt and brambles on her." 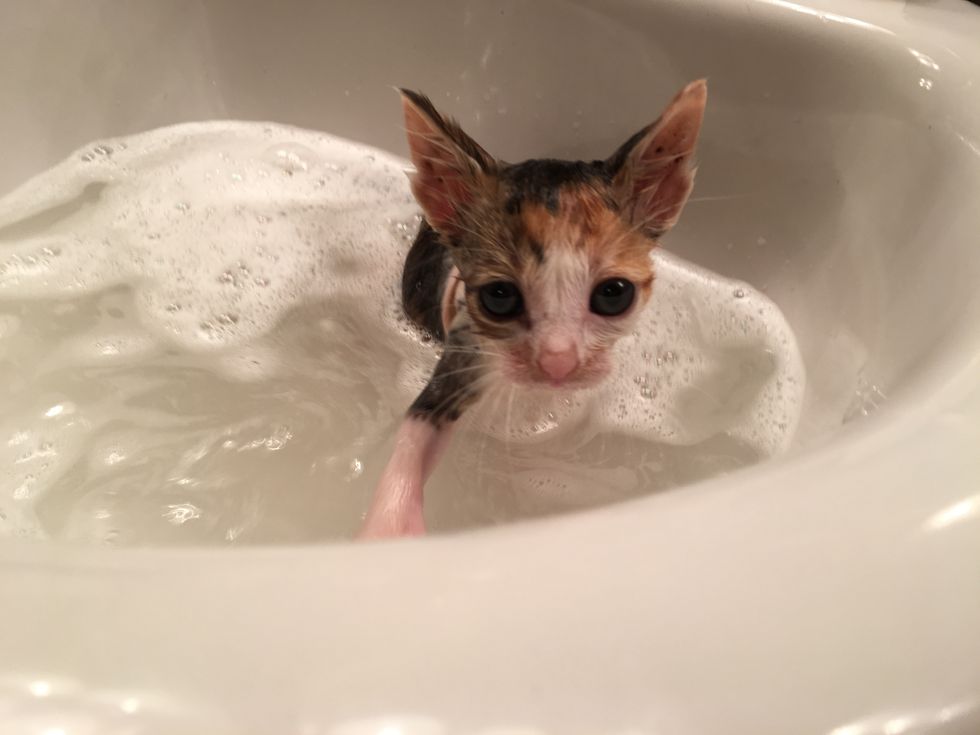 They brought her back to health. 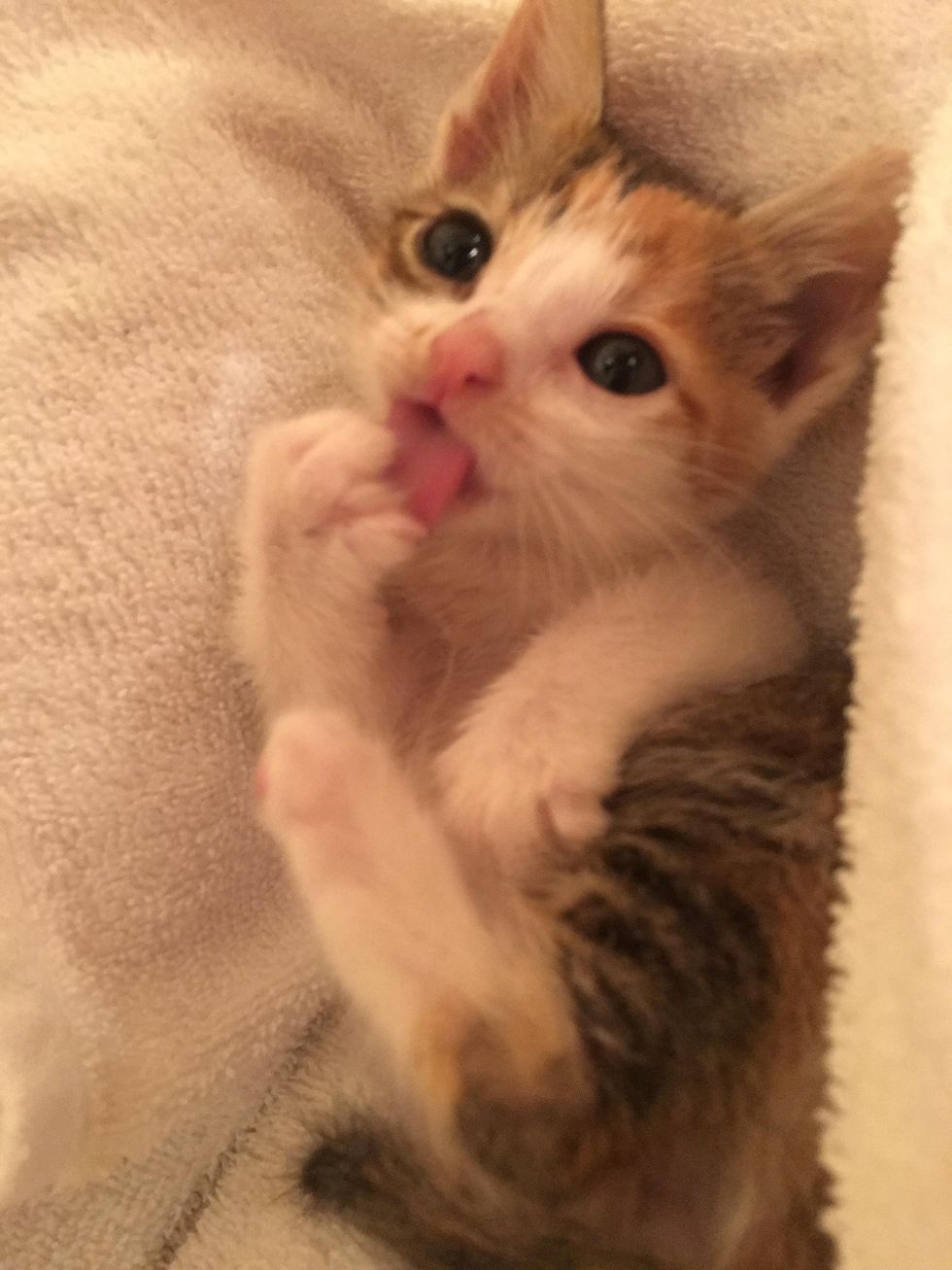 A month later, the little calico had tripled her weight!

"Once we finished the antibiotics and the eye ointment, I took her to my regular vet to get checked out. In 4 weeks she gained over a pound and weighed in at 1.7 pounds." 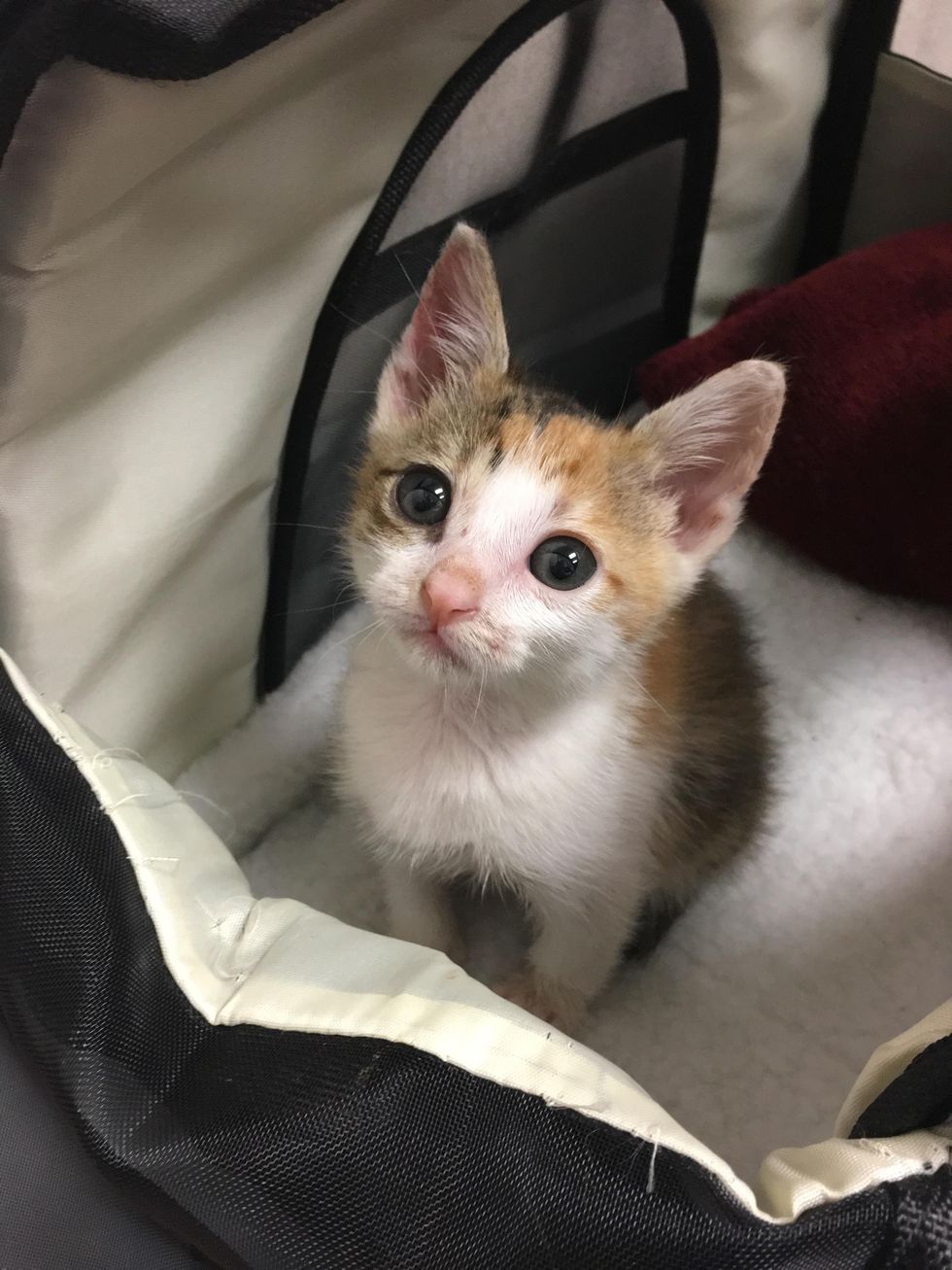 "Her personality is just the sweetest. She loves to play and is such a ham." 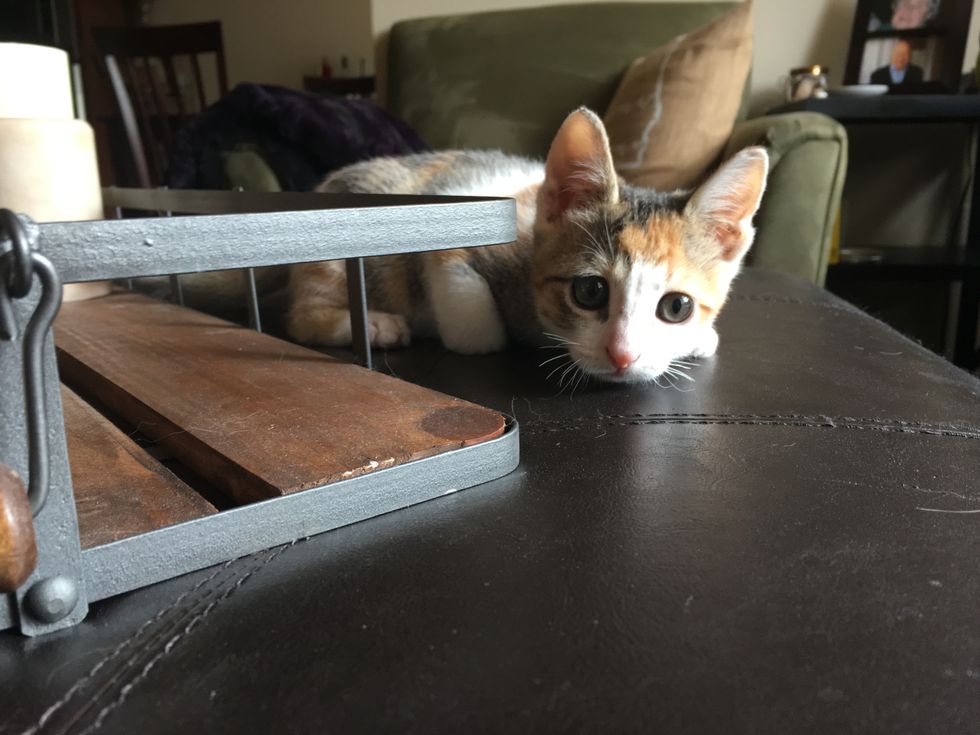 "She's always bouncing around and forcing her way in for attention. I'd like to think she's happy here!" 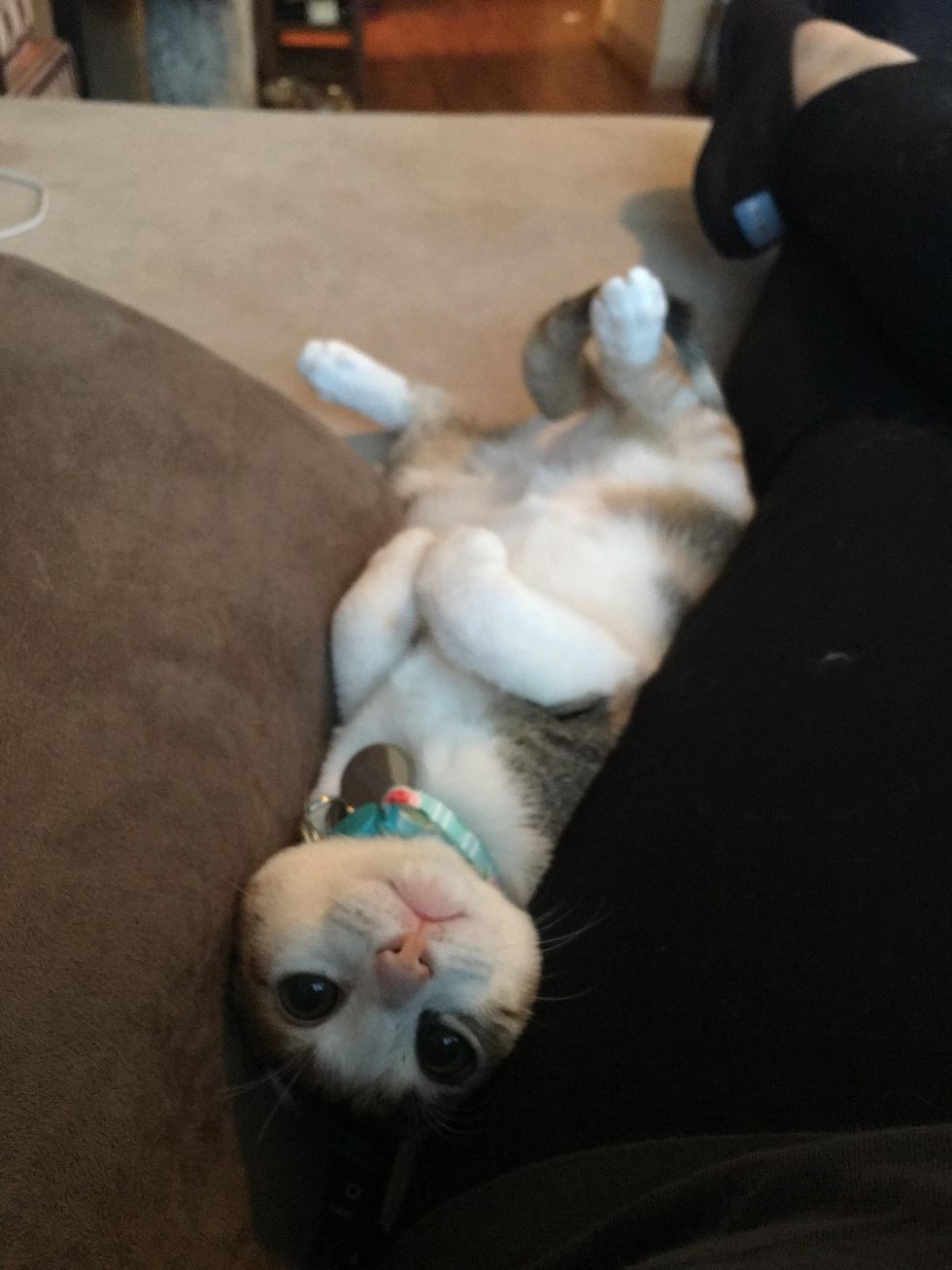 Two months and a week after they found Finley, she had grown by leaps and bounds!

"A couple vet visits later, some vaccinations, and lots of TLC and she's turned into the sweetest, funniest, feistiest little thing. I wasn't going to keep her but how could I not?" 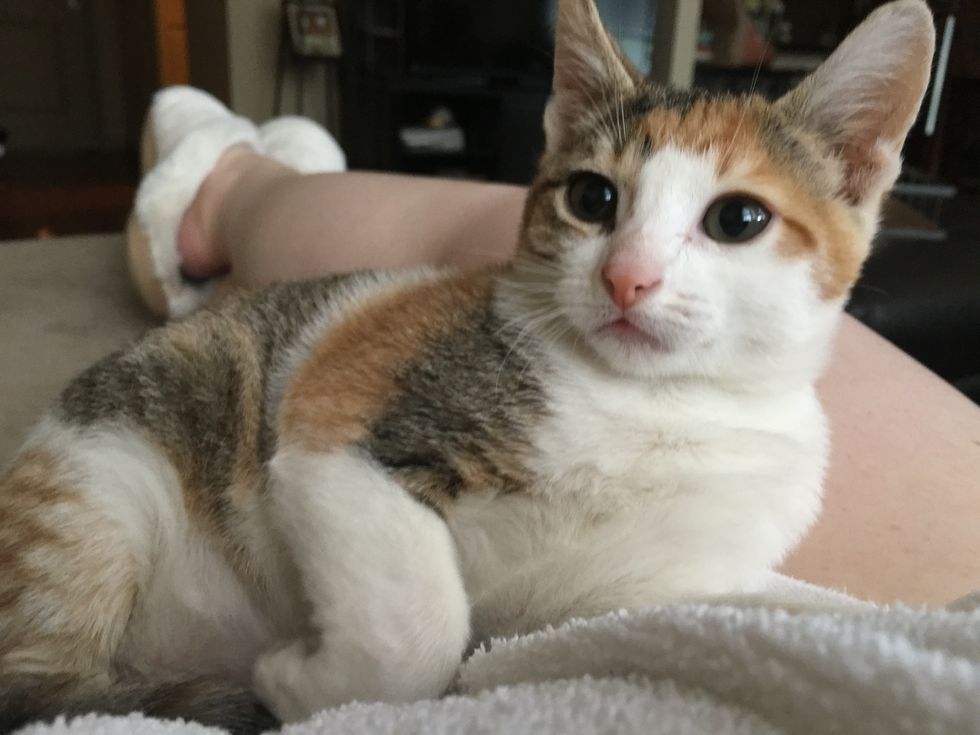 "She is happy and healthy and I love her more than words can describe. She's full of attitude, but I wouldn't have it any other way!" 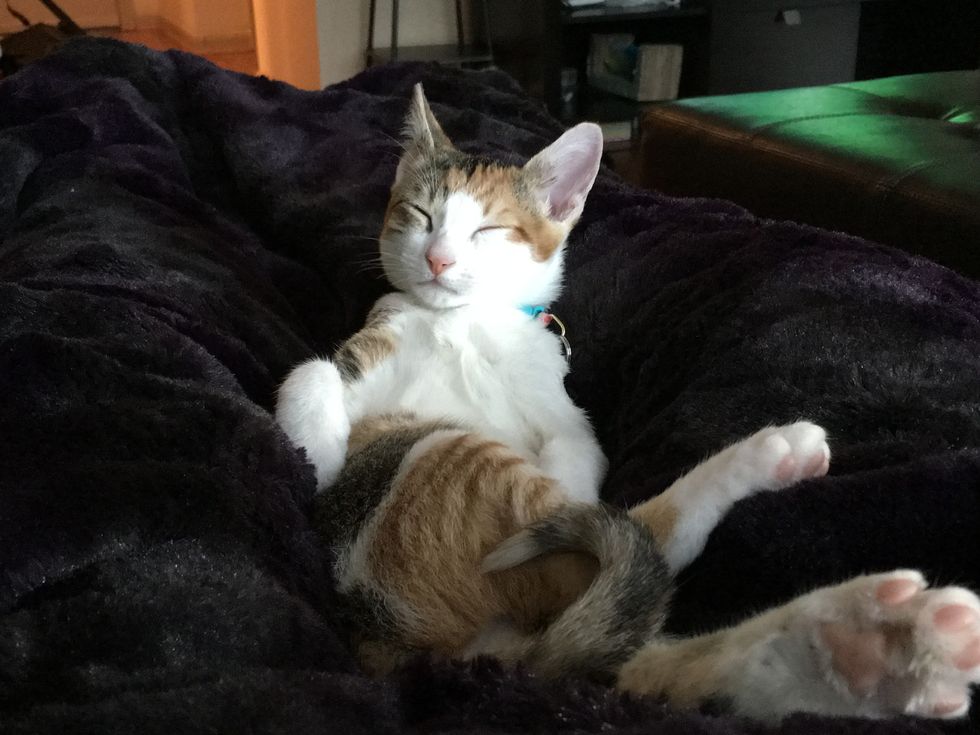 Related story: Homeless Kitten Fell Asleep in Her Rescuer's Truck, He Didn't Have the Heart to Wake Her