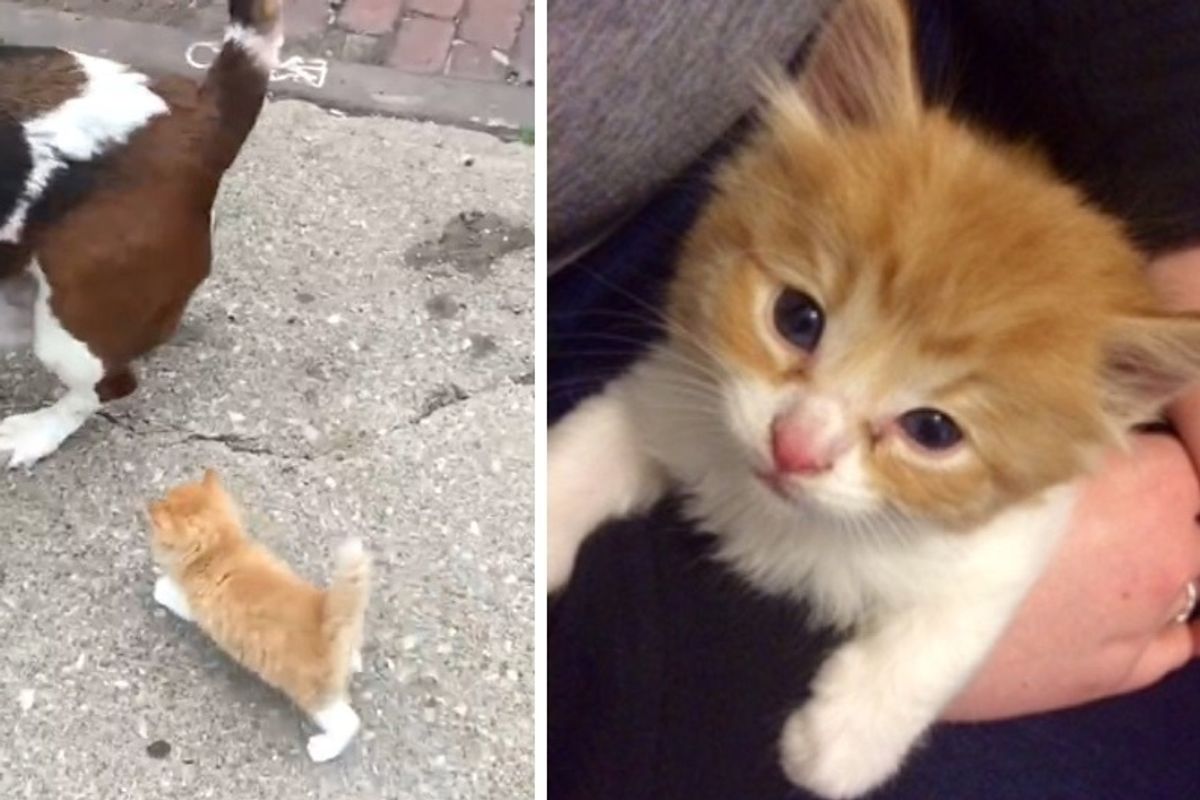 Stray Kitten Sprints Up to Man and Dog and Determined to Follow Them Home..

A man found a tiny stray kitten while he was walking his dog. The little fearless kitty was determined to follow them home. 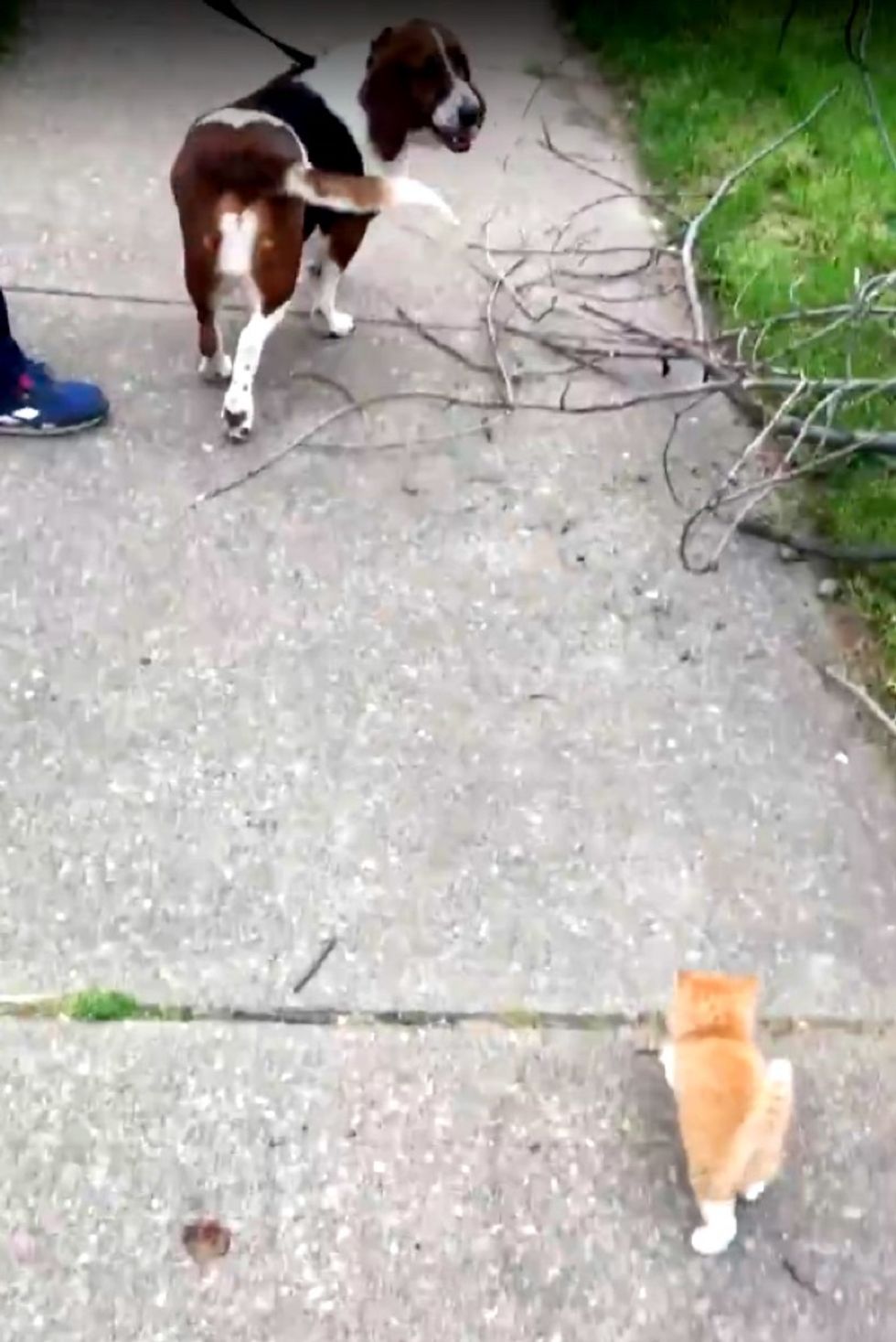 Last summer when Jon Nienaber was walking along the neighborhood with his dog, a tiny stray kitten ran up to them and decided to tag along.

"My husband and I live in Cleveland, OH, in an area with a lot of feral cats. We have a basset hound, and one day my husband was walking the dog when he called me and told me he found this adorable little kitten that just seemed like he wanted attention," Leslie Nienaber told Love Meow.

She quickly grabbed some cat food and headed over to meet the kitten. Little Pinot was so tiny at the time that he could fit into the palm of their hand. 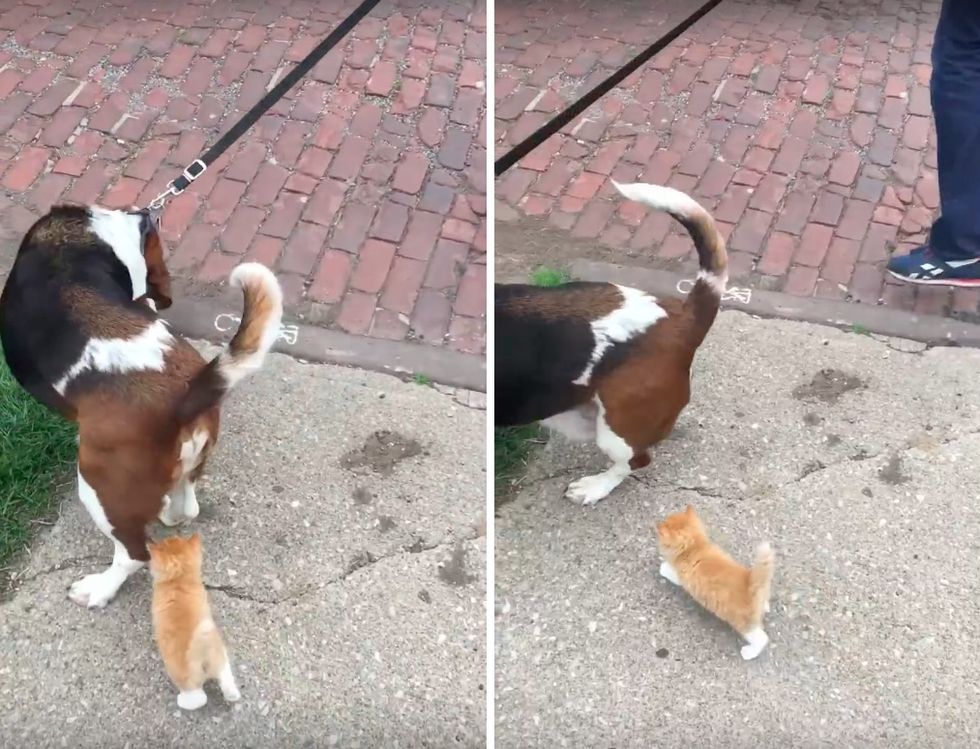 "He poked his head through a little chain link fence, and he started following Jon and I as we were walking away! He seemed determined to stay with us."

When the kitten followed them to the end of the street, Leslie said to her husband that they had to take him home.

The brave little ginger boy tried to play with his canine friend and would walk up to people for love and attention. "When I got him home, he was really dirty, and I tried to clean him the best I could. He seemed hungry," Leslie told Love Meow.

The couple already had three cats and a dog, a full house, so Leslie thought about her sister, Sarah, who is also a cat lover herself. Sarah came the next day and took the kitten in with open arms. 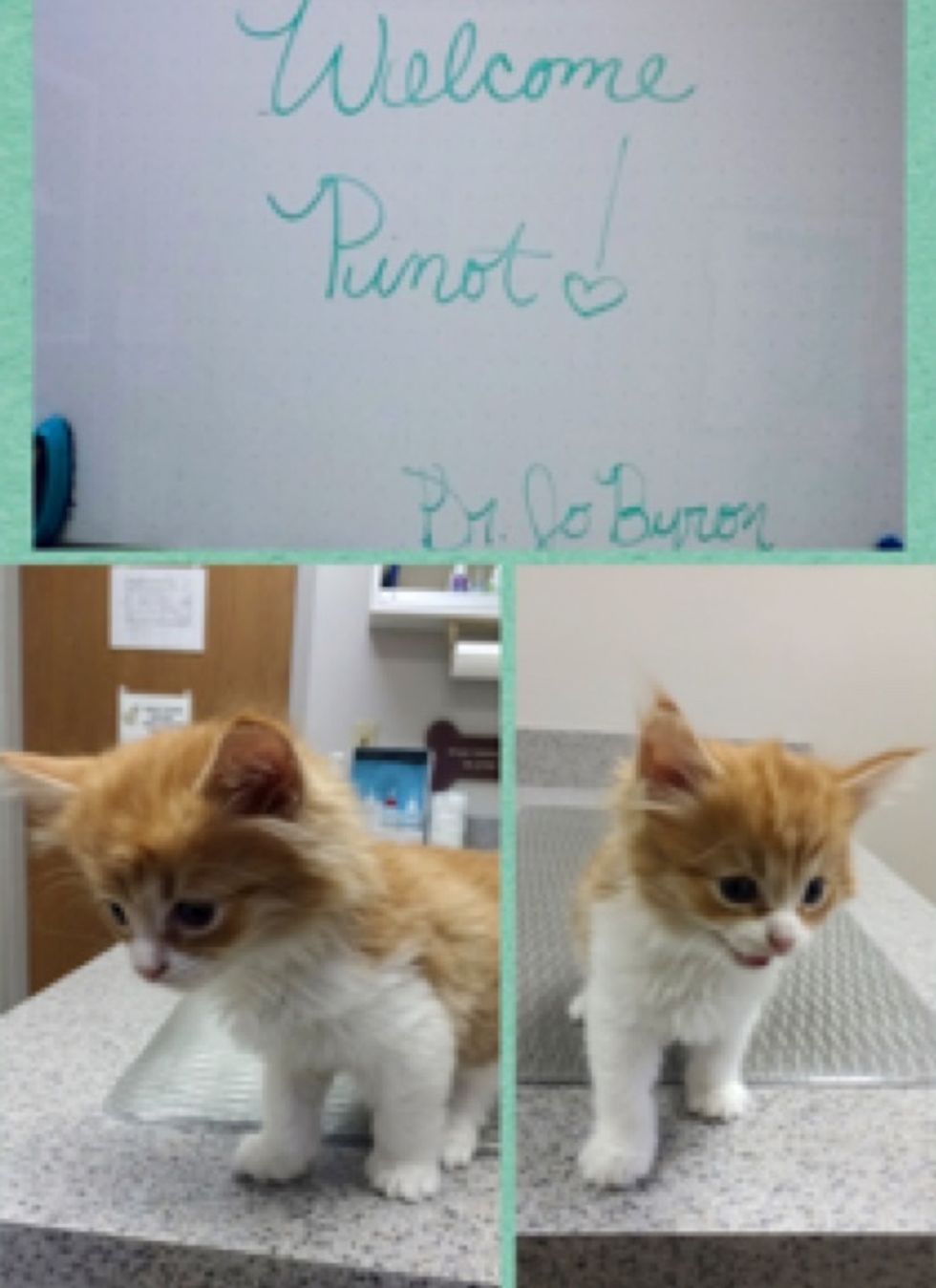 First trip to the vet!Supplied by Leslie Nienaber

"I'll admit that it was really hard to give Pinot away - he was just this brave, determined little soul who wanted to survive, and was the cutest kitten we had ever seen. It made me really happy that my sister took him in, because I knew I'd get to see him grow and I could always visit him," she said.

Sarah was smitten with Pinot from the moment she saw him. After a few trips to the vet, the little kitten was back on his paws, stronger than ever. 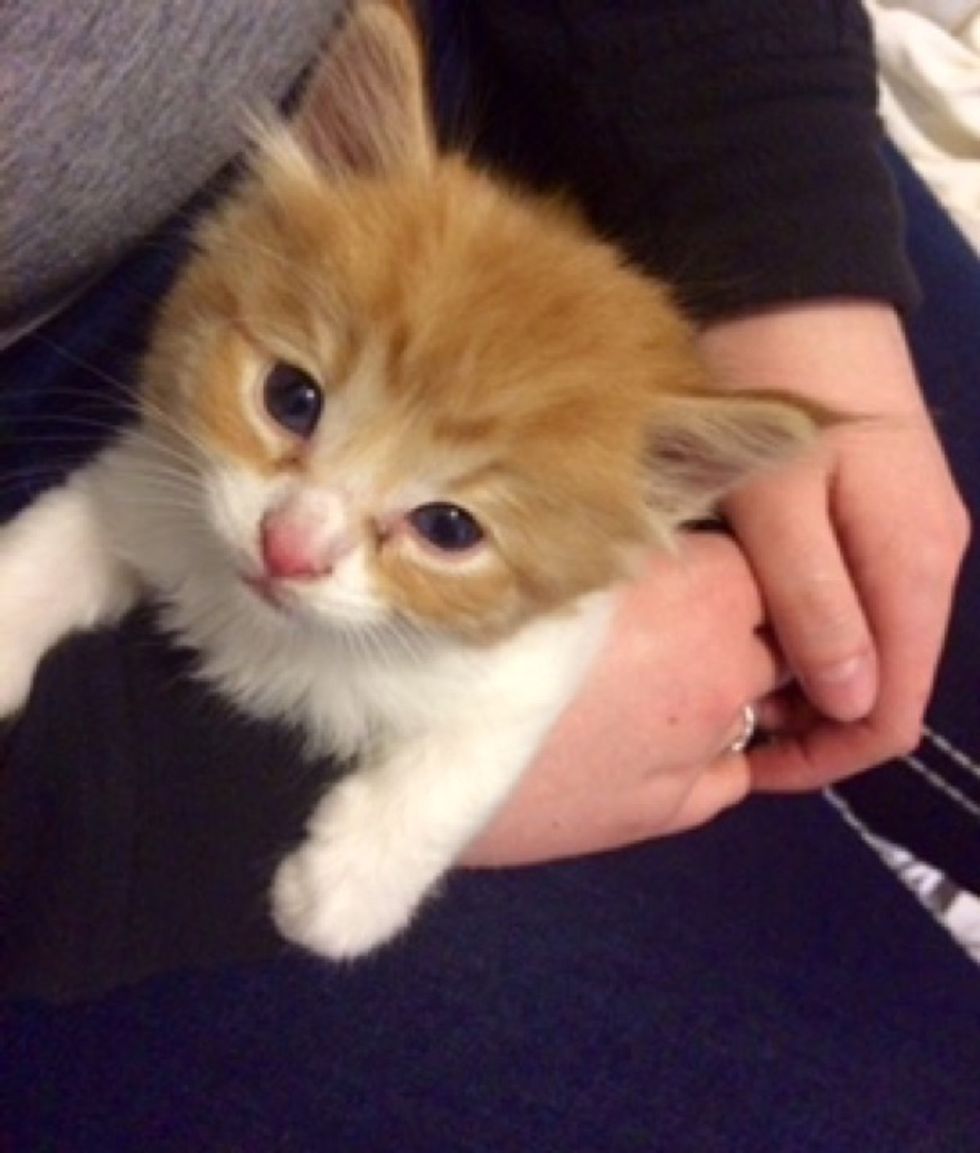 "My sister Sarah was seriously an angel. I am convinced that he would have died if we hadn't brought him home," Leslie told Love Meow.

"He is obsessed with Q-tips, to the point where Sarah has found them scattered all around her bathroom, and loves watching birds from their apartment window." 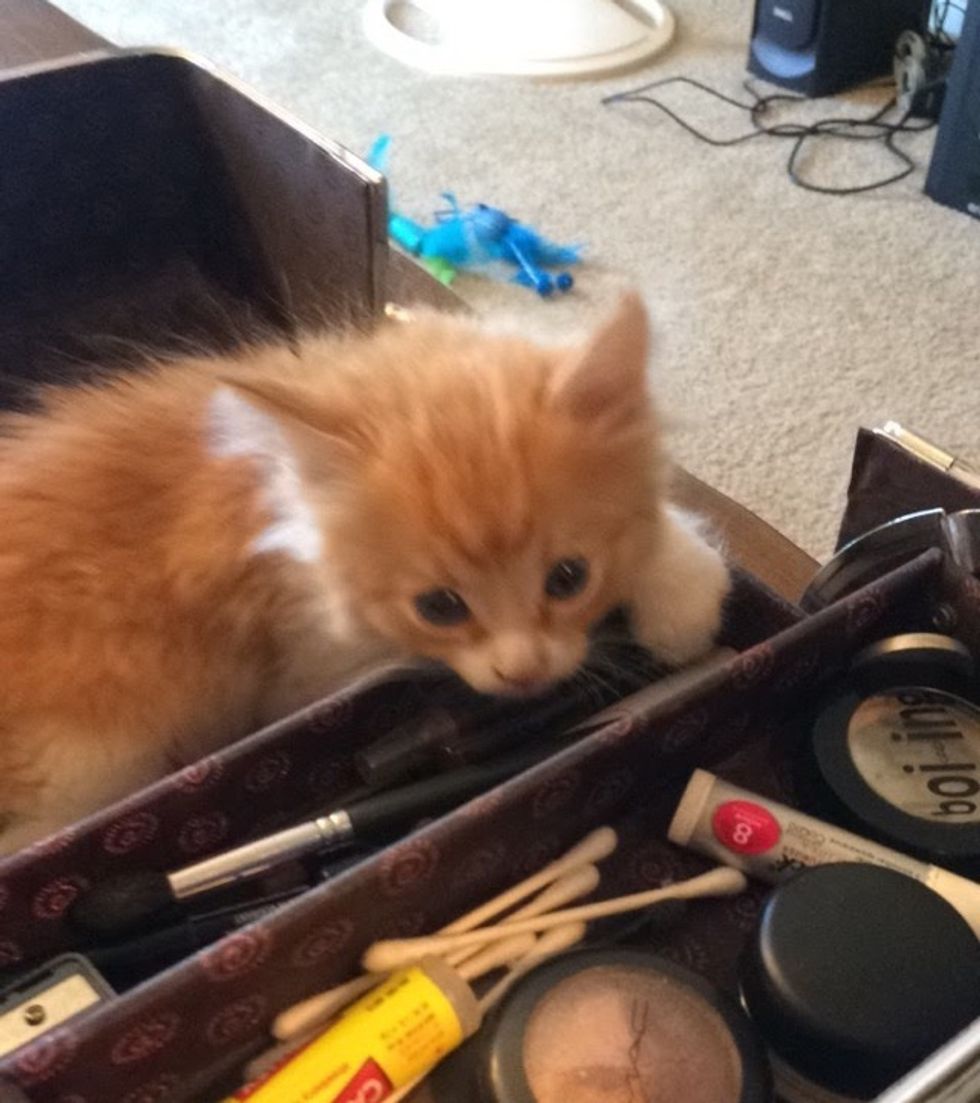 Pinot is quite a character. 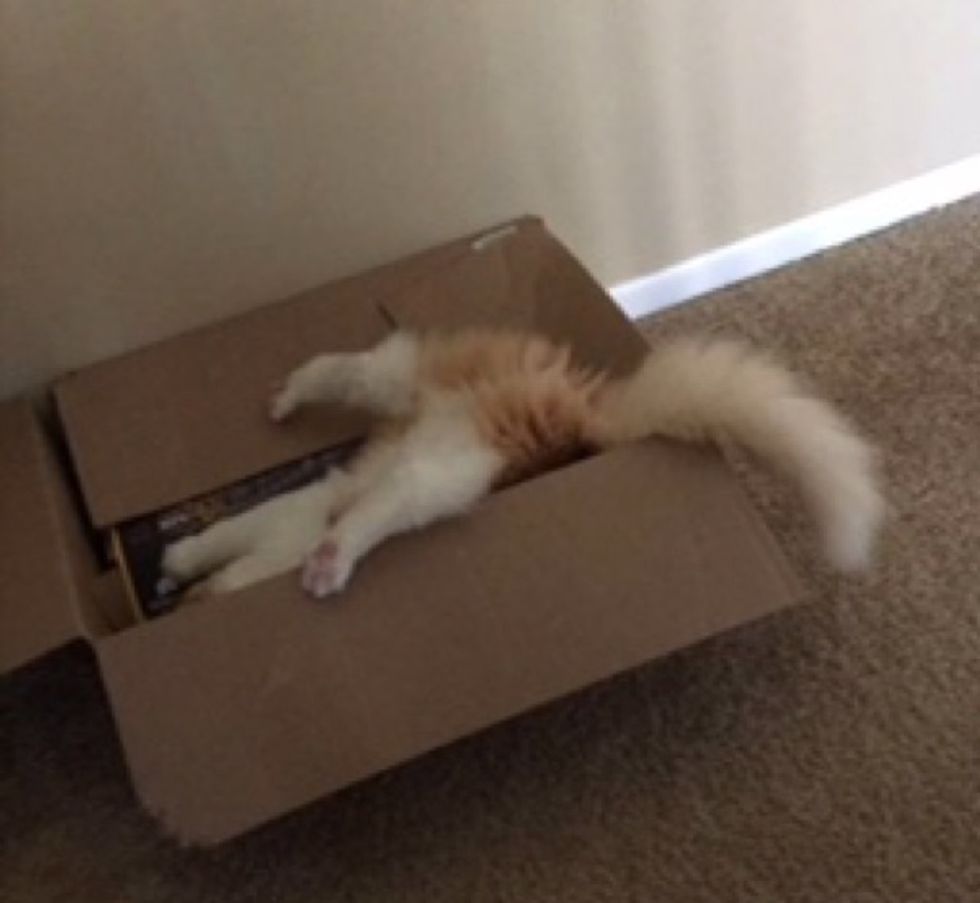 Who needs kitty beds when you have boxes. 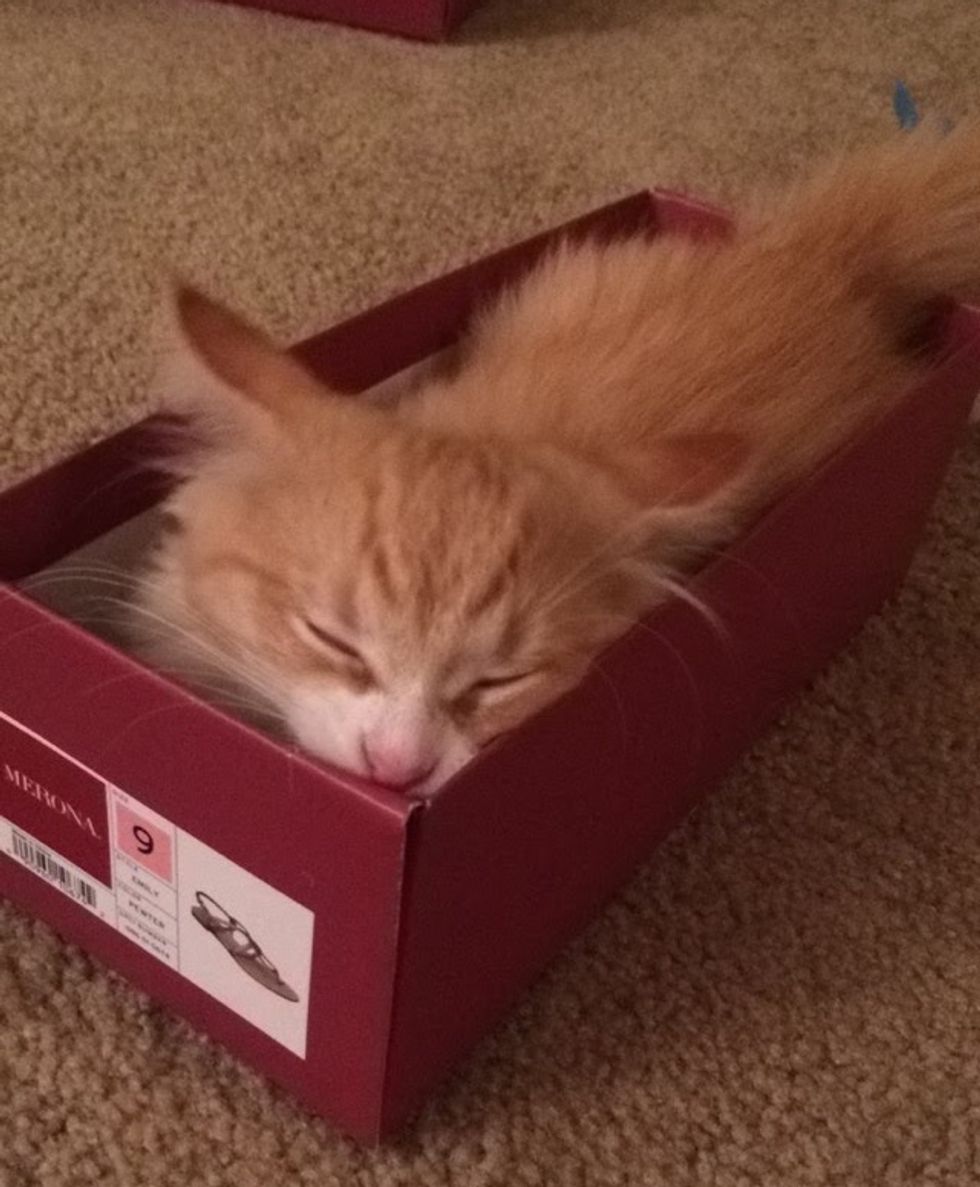 It's been a year since Pinot found his humans. The ginger boy has all grown up. 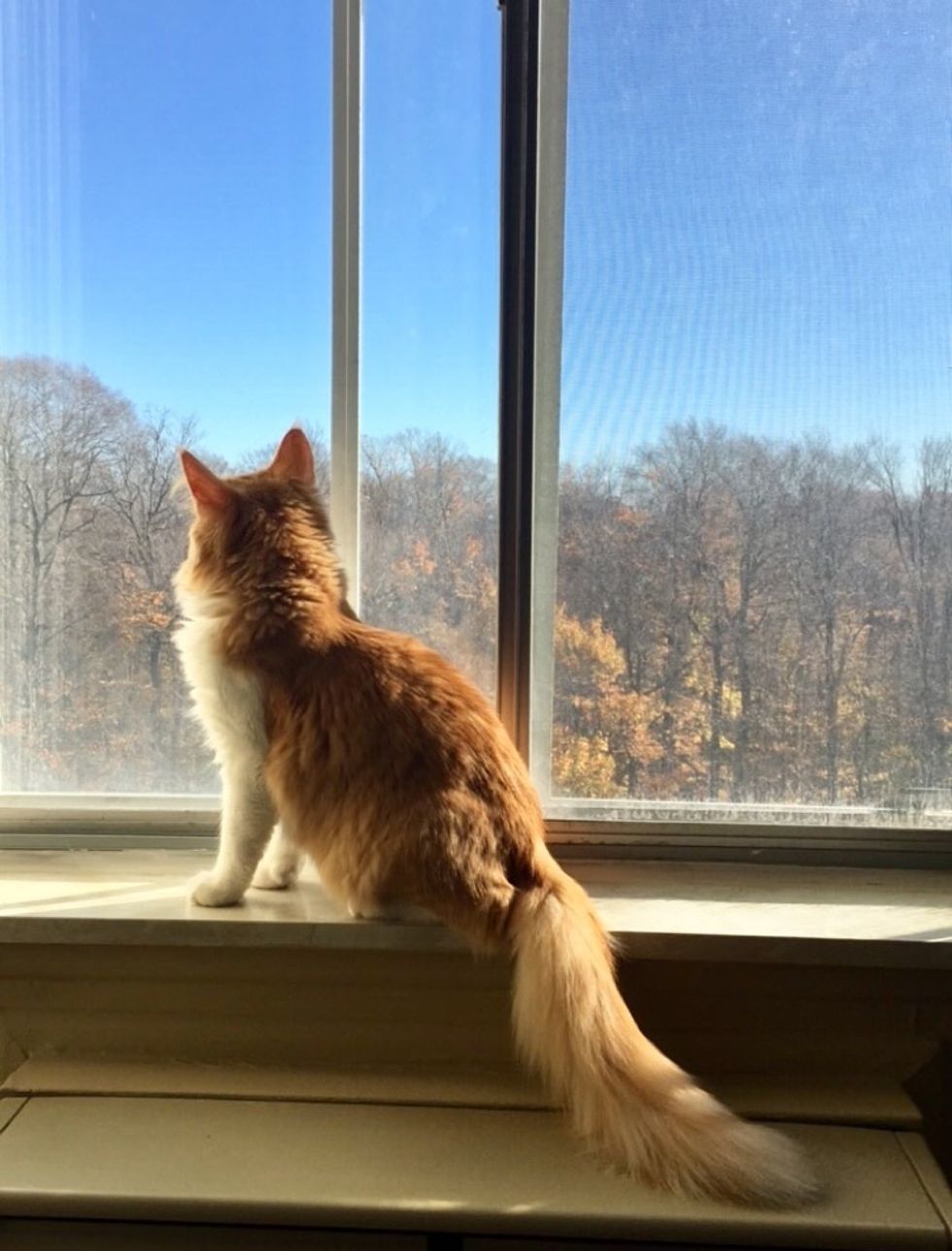 "The vet thinks he has some Main Coon in him! He still has some of his 'street smarts' and you will often find him hiding around a corner ready to pounce."

Showing off his glorious floof! 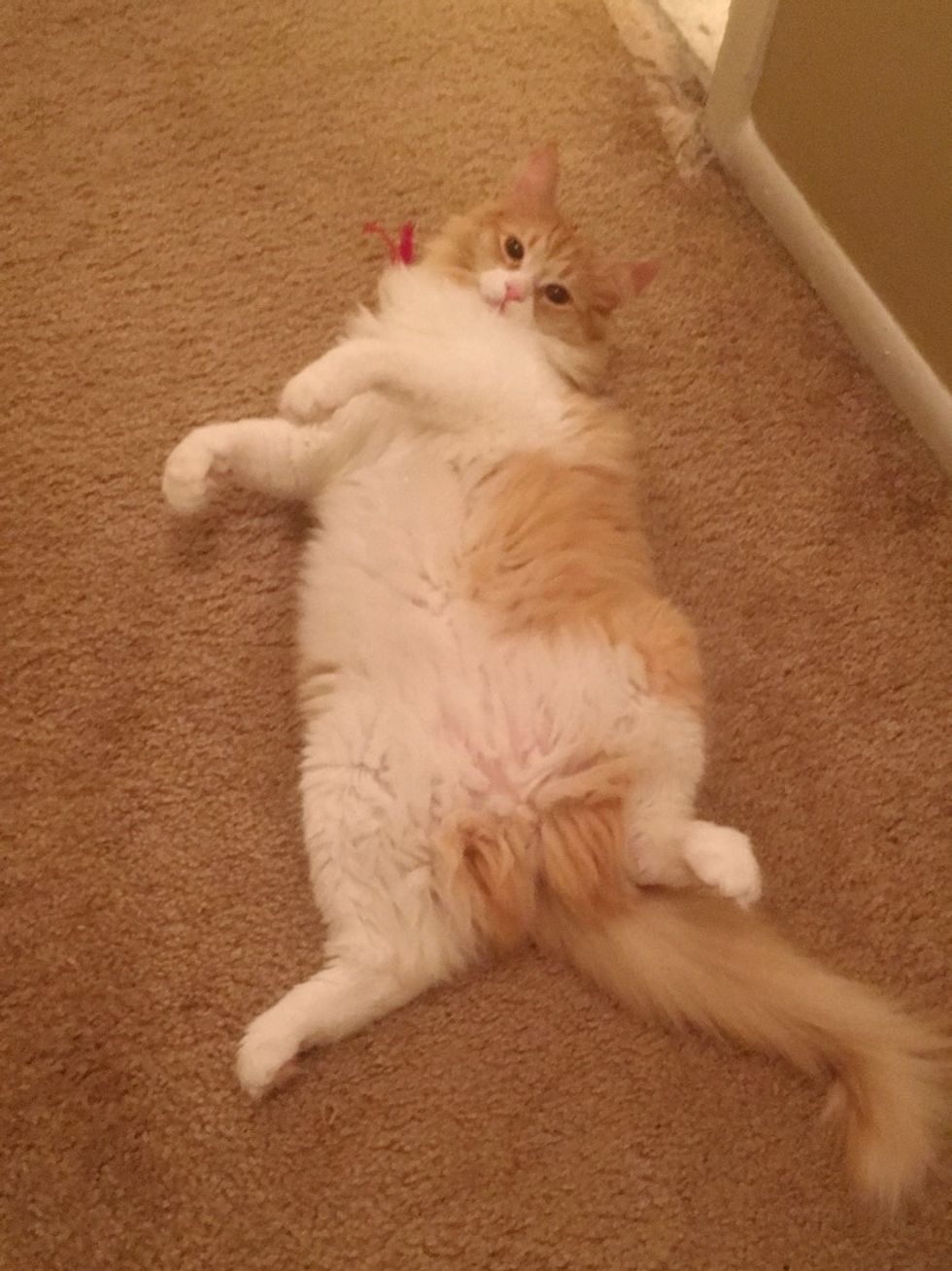 Pinot inspecting the kitchen cabinets. He is curious and very smart. 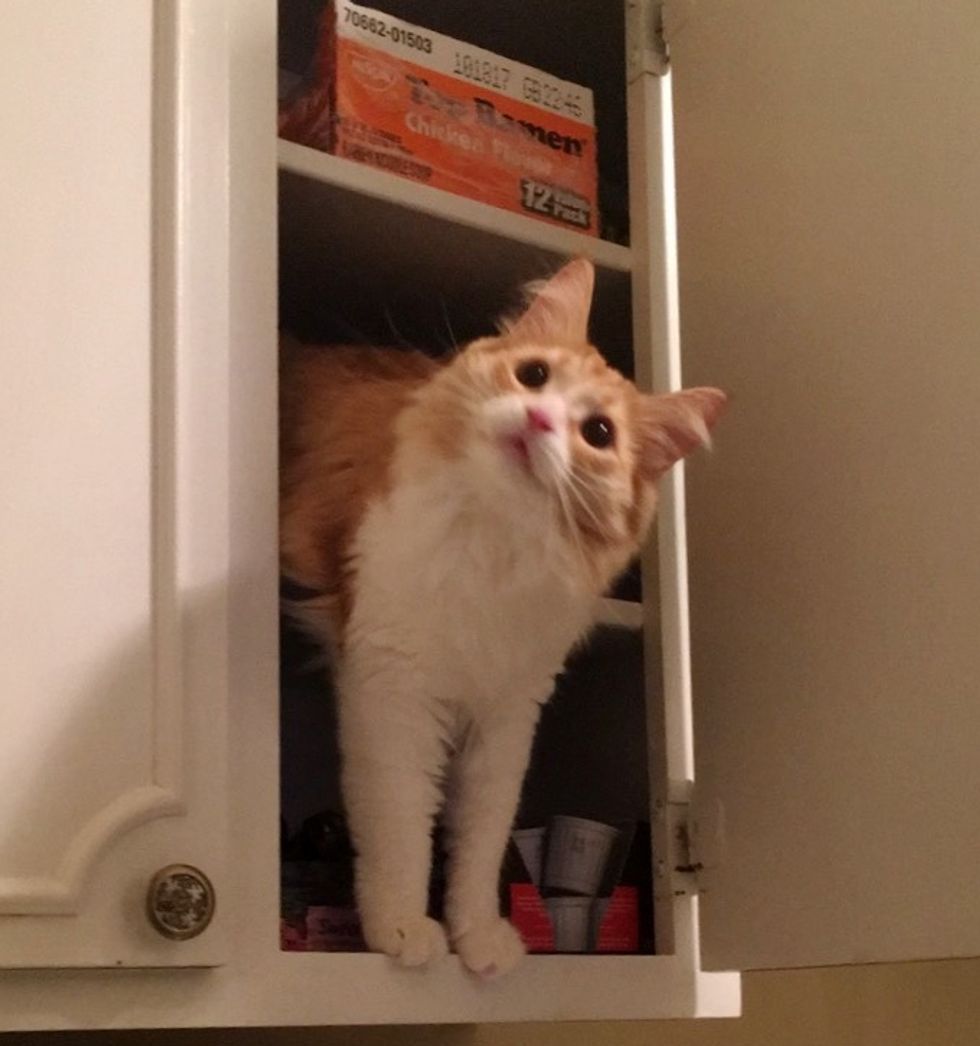 The tiny palm-sized kitten has blossomed into a beautiful fluffy cat.

Pinot was determined to follow them home that day, and now he is living the life like a king! 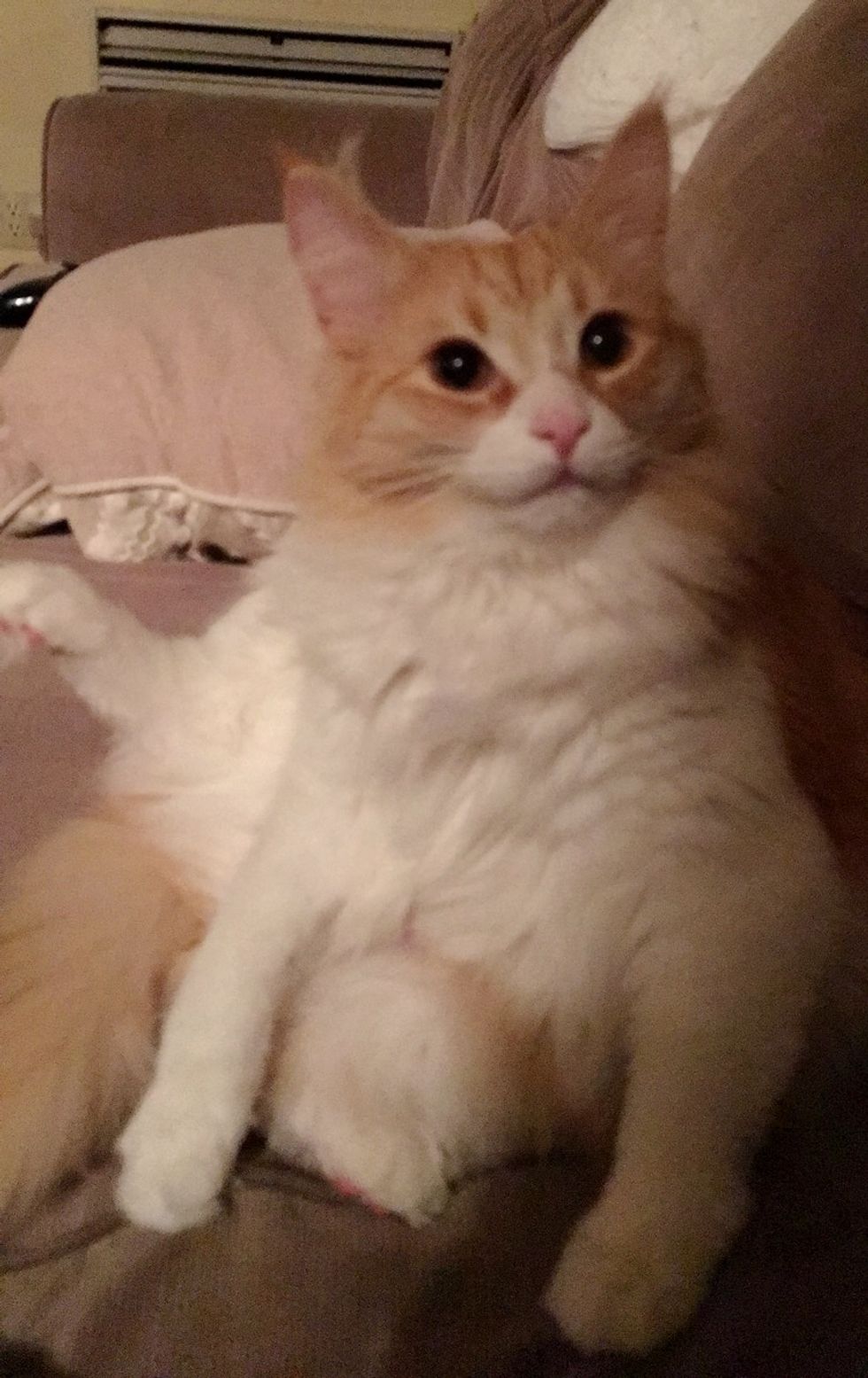