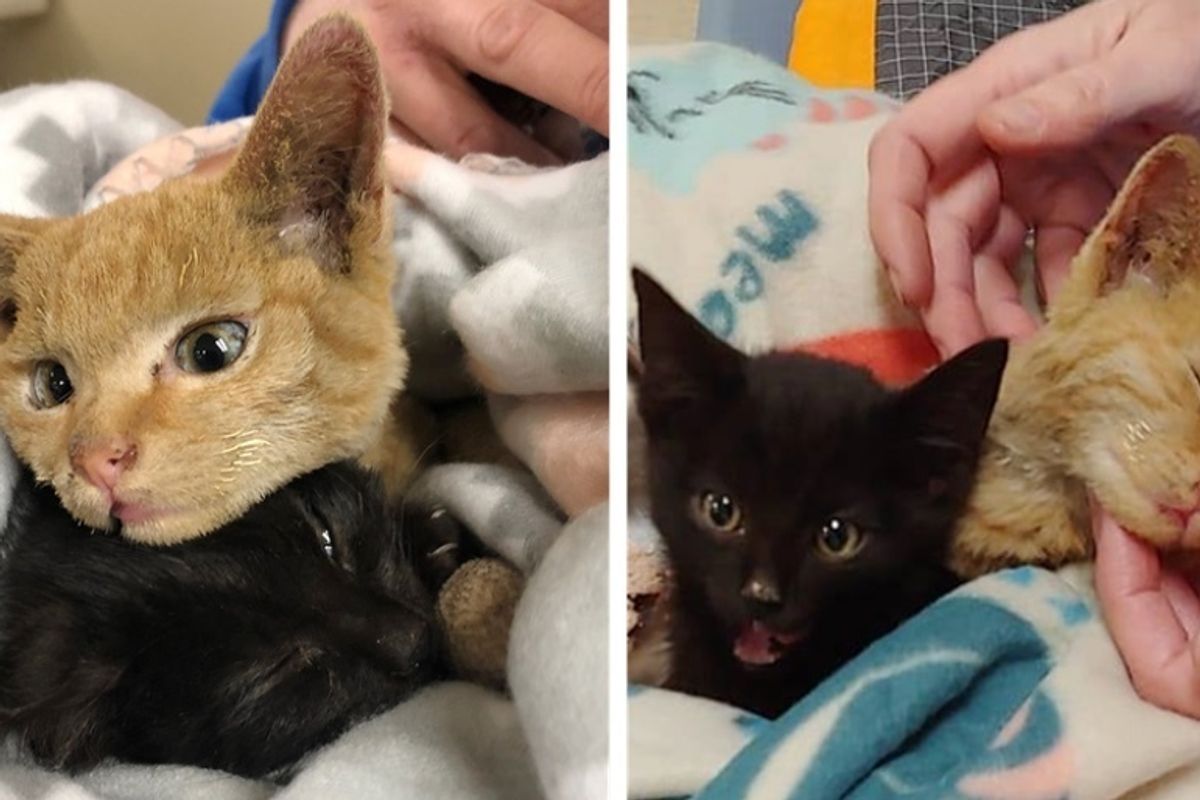 Kitten Shields His Brother Even After They Were Rescued from Wildfire, to Keep Him Safe

Two kittens were pulled from the disaster area in Concow, California after the devastating wildfire ravaged the town.

The orange kitten kept covering his brother and wouldn't leave his side.

Scroll down for updates.

Shayla and several other volunteers met a police officer who had located two horses up in Concow. He escorted them to the area. "We caravanned in our trailers behind this officer so that we could go in and catch the horses," Shayla told Love Meow.

When they arrived, they were stunned by the devastation. While Shayla wrangled the horses into her trailer, they noticed two little kittens scurrying around with an adult cat nearby, who appeared to be their mom. The kitties quickly retreated into a wood-burning stove to hide when they saw the rescuers.

They believed that the cat mother had hidden her kittens in the stove as a safe haven from lurking coyotes. When the wildfire scorched the area, the stove shielded them and saved their lives.

The feral cat mom ran off while rescuers approached, but they continued the mission as the kittens needed immediate medical attention and care.

A fellow rescuer reached into the stove with his rubber gloves on. After feeling around inside, he brought out a tiny black kitten first and then an orange kitten who had been burned.

"Ironically, they were in a wood stove when they survived the fire," Shayla said.

The kittens were so scared and cold that they were huddled up together in the carrier.

Shayla brought them to her son and her friend, who were waiting outside the barricade, and asked them to transport the kitties to FieldHaven Feline Center, in Lincoln, California, while she would get the horses to safety.

Once the kittens arrived at FieldHaven, they were immediately tended to by the staff and the medical team.

"The people at FieldHaven were wonderful. They put them in warm towels and started getting them IV fluids right away," Shayla told Love Meow. "They told me that the little orange one probably wouldn't have made it one more night."

Staff named the kittens Ash (black) and Phoenix (orange). Ash is the smaller one of the two and Phoenix is a little protector.

"Phoenix had singed fur, no whiskers, and burned paws. He was very protective of his brother who was unharmed. All through their first night at the shelter, Phoenix kept throwing his body over Ash," FieldHaven said.

"We think it's because he threw his body over Ash during the fire to protect him. Once Phoenix realized Ash was safe and sound in our care, he relaxed enough to start his own healing."

It's difficult to gain access to disaster areas, but rescuers are working with an officer who is keeping the mama cat fed and safe.

The two kittens are on the mend. Phoenix hovers over his little brother, making sure he's safe and loved. They are like two peas in a pod, completely inseparable.

Phoenix and Ash have been adopted together!

Cuddling with their forever human!

The two best friends went home just in time for the holidays. Happy and loved!

"Phoenix and Ash still snuggle every day. They just turned one year and they are loving life," Robin said.

"They have on older doggy brother and two older kitty sisters. Life is great for these little guys."

Phoenix and Ash love to watch the hummingbird TV together by the window.

Related story: Cat Missing for a Decade Found His Way to His Family After California Fires