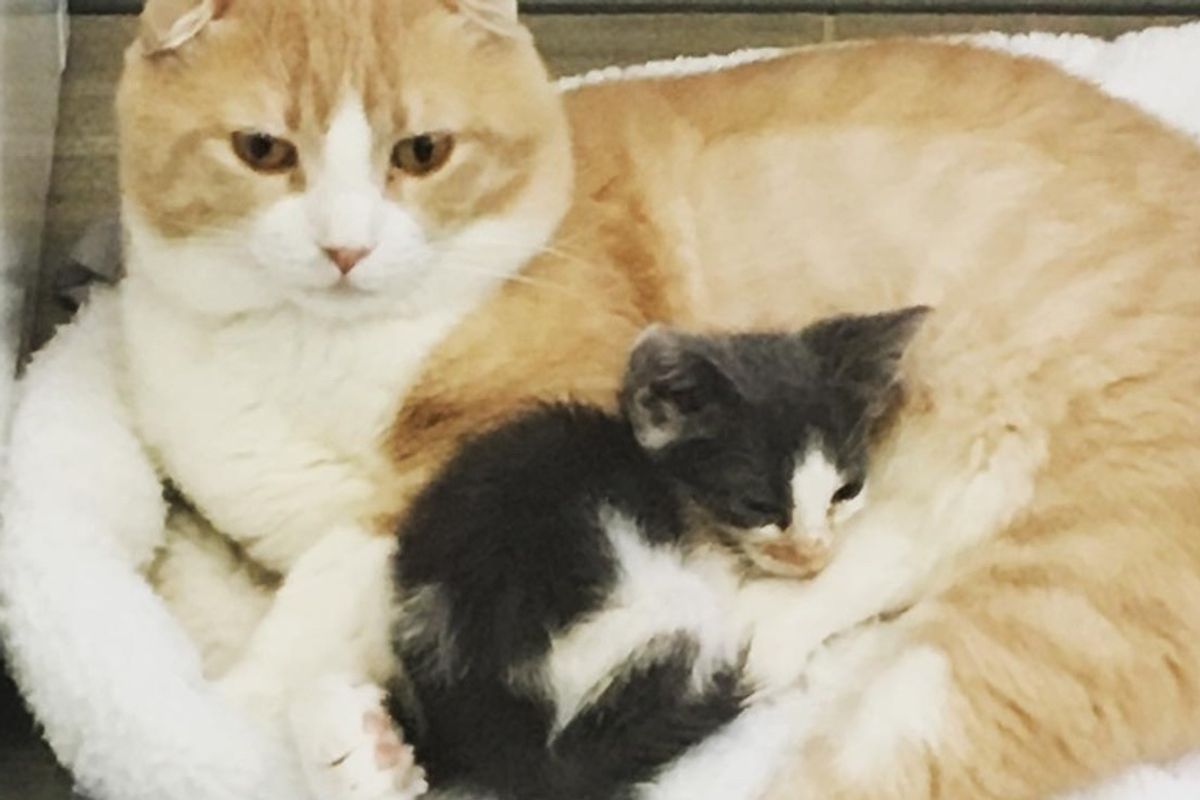 Kitten Found on Side of the Road, Didn't Thrive Until He Cuddled with Cat at Clinic

A kitten who was found on the side of the road, had a difficult time thriving until he met a cat at the vet. 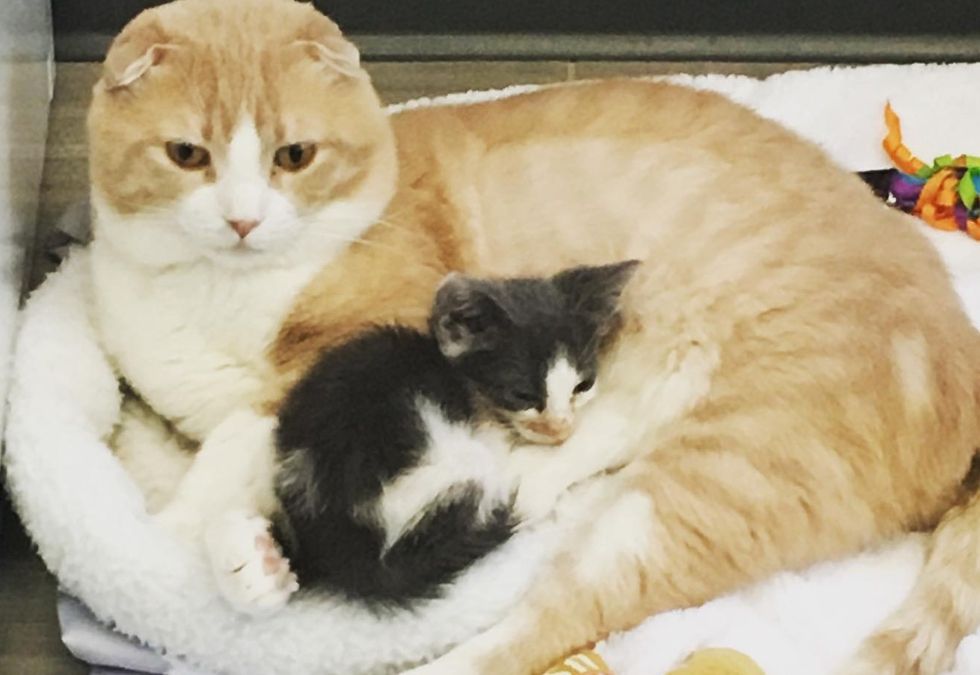 A Good Samaritan found two kittens lying on the side of the road. One of them survived and was breathing faintly. She immediately reached out to Oaks Veterinary Urgent Care in Agoura Hills, California for help.

"She put both kittens in her car and called us on her way over. She couldn't care for the little one and asked us if we could take him on. We said yes," Dr. Rachel Wallach, Veterinarian at Oaks Veterinary Urgent Care, told Love Meow.

"She told us she had named him Skywalker so that he would be strong and the force would be with him."

The kitten was in rough shape, very dehydrated, emaciated and covered in fleas. The veterinary team started him on fluids and antibiotics right away. The kitten was so thirsty but only had enough strength to eat a small amount. 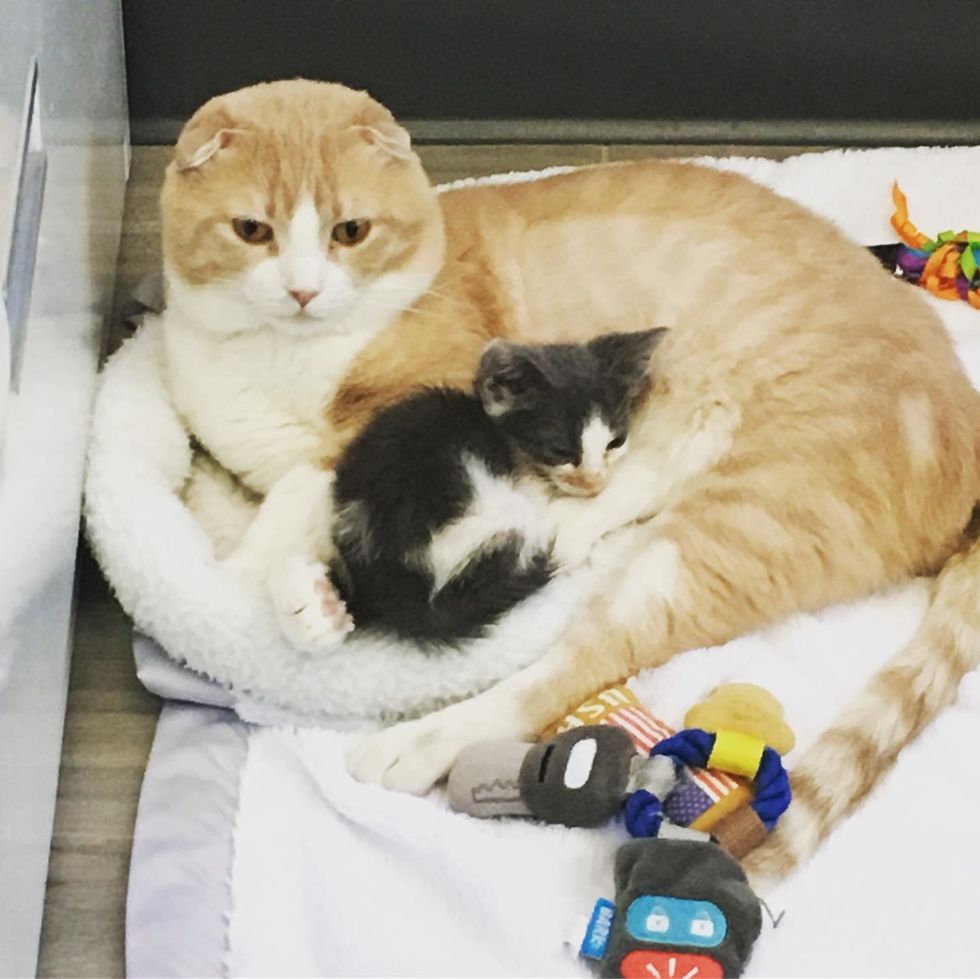 "He basically slept for the first 24 hours we had him. His life on the streets had wiped him out," Rachel told Love Meow.

Over the next few days, it was touch and go. Even with extra attention he didn't really thrive. Once the fleas were clear and he was healthy enough, they decided to try pairing him with a surrogate mom.

Every time, Skywalker was next to a cat, he would perk up immediately and eat. After a few unsuccessful introductions, Fergus the resident rehab cat came to mind. 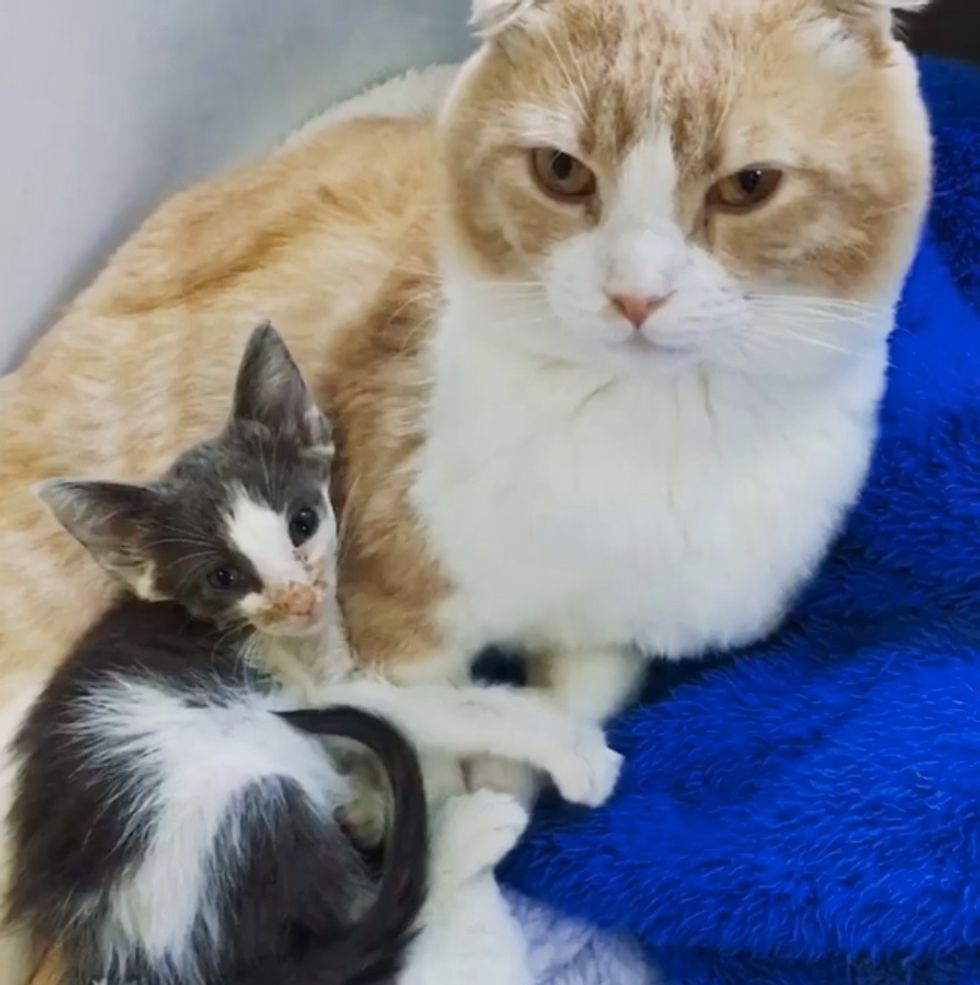 Fergus, a rescued Scottish Fold, has been caring for animals in need since he discovered his knack for fostering.

Skywalker immediately threw himself at Fergus upon introduction. At first, the ginger cat was a bit confused with this very affectionate kitten rubbing his face all over him. The little one would curl up in his arms and didn't want to leave.

But soon, Fergus ambivalently began grooming him and tolerating his affection. 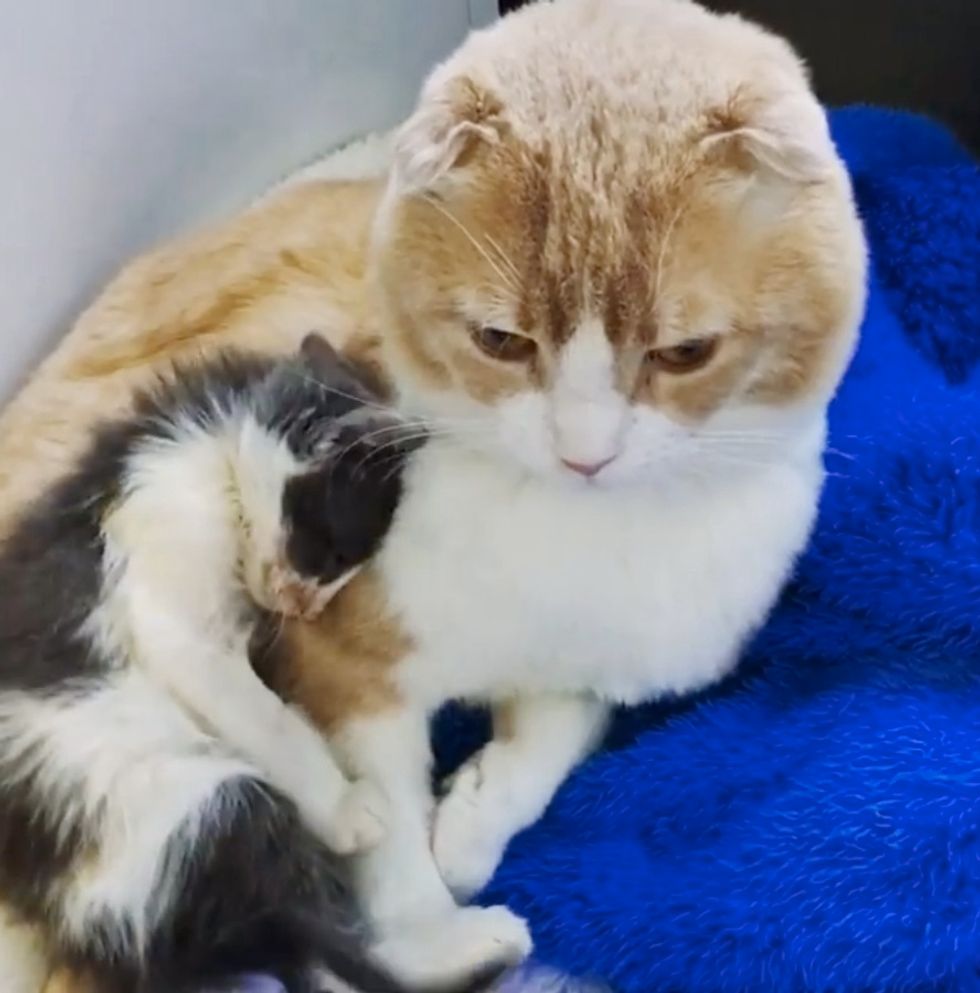 "Within 1-2 days, he accepted Skywalker as his new charge. The attention and grooming propelled Skywalker forward and he gained almost 100 grams in two days," Rachel told Love Meow. "He finally had an enthusiasm and was making amazing strides."

Oaks Veterinary Urgent Care on Instagram: “Everyone needs a little TLC. Someone found a tiny kitten barely alive laying on top if it’s sibling (who had unfortunately passed) on the…”

Fergus was rescued from a difficult situation, which left him paralyzed. Wrenn Rescues in Thousand Oaks, California brought him to the clinic for a second chance at life.

The clinic made the commitment to his long-term recovery to ensure that he would get the best quality of life. A few weeks after his rescue, Fergus stood on his own for the first time.

"I'd like to think it had something to do with our care, but it wasn't. Fergus had been motivated by meeting another cat friend," Rachel told Love Meow. 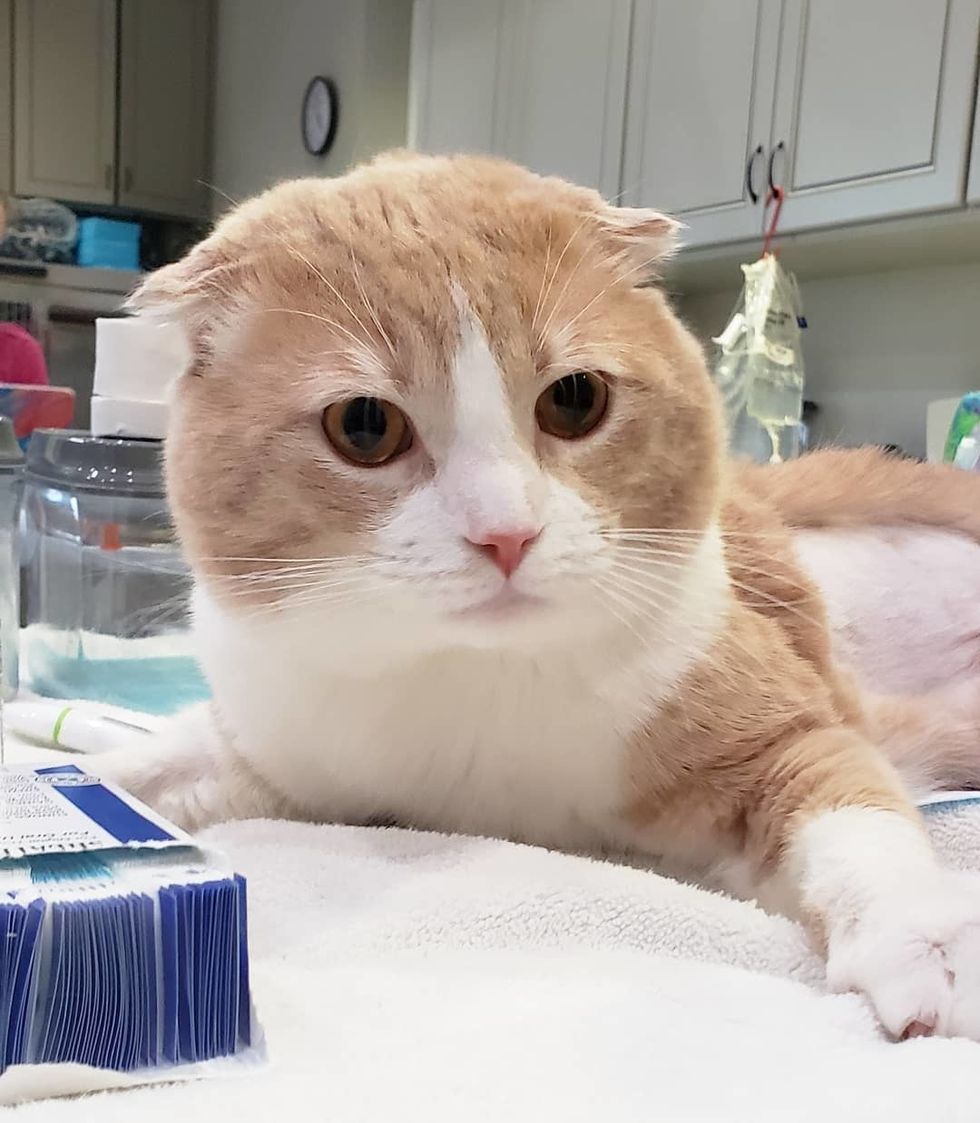 Fergus has always had a soft spot for animals in need and is eager to meet them and comfort them if they are not feeling well. He's become a resident rehab cat at the clinic. While he continues to receive the best care, he's giving back by helping those who come through door for a chance at a better life.

"He met a dog recovering from heat stroke and buddied up to him for the day he spent with us. He hung out with one of our dog rescues whose infected skin hurt him so badly he could barely walk," Rachel said.

"Animal control brought us a bunch of orphaned ducklings and Fergus was quick to provide comfort and warmth to them." 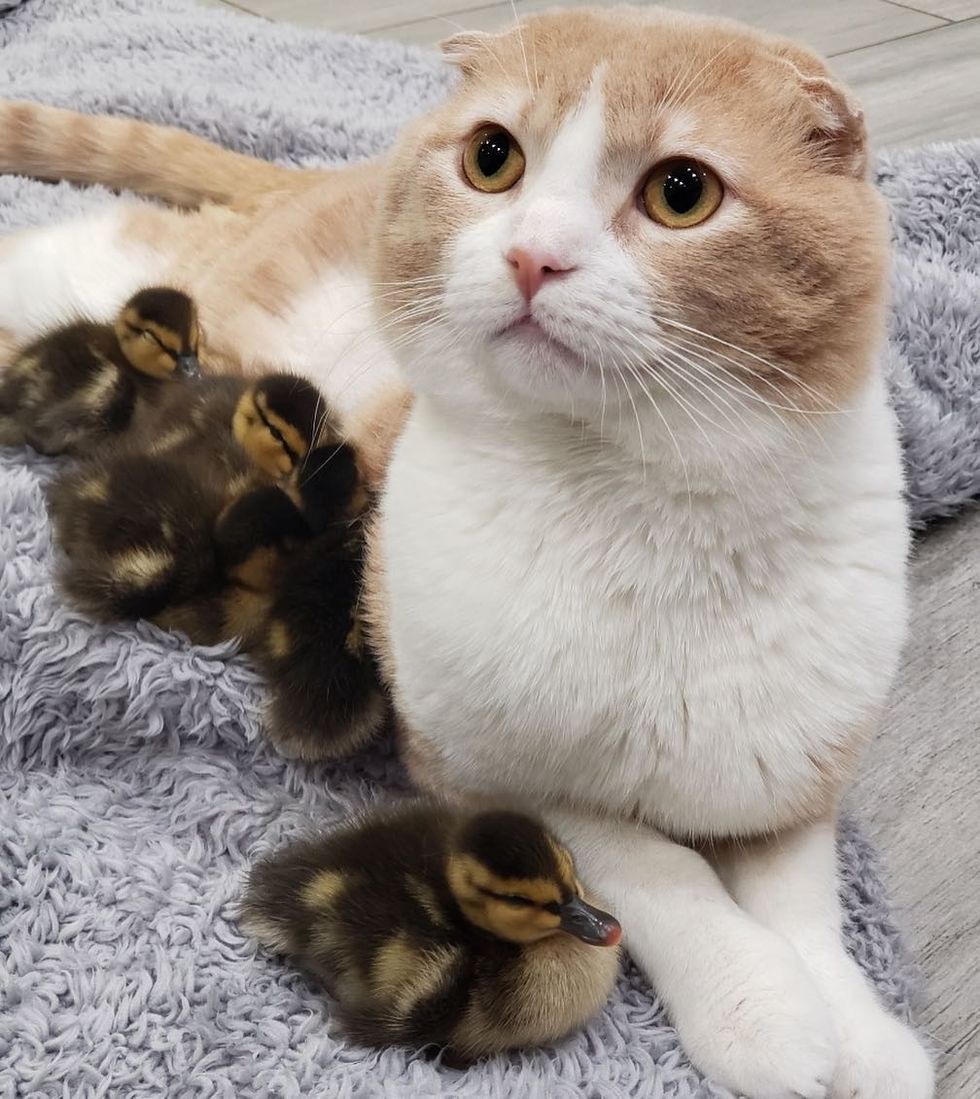 Skywalker has recovered fully thanks to the love from his foster dad.

He has also found another rescued kitten to be his best friend — ET who happened to be Fergus' foster kitten before Skywalker. 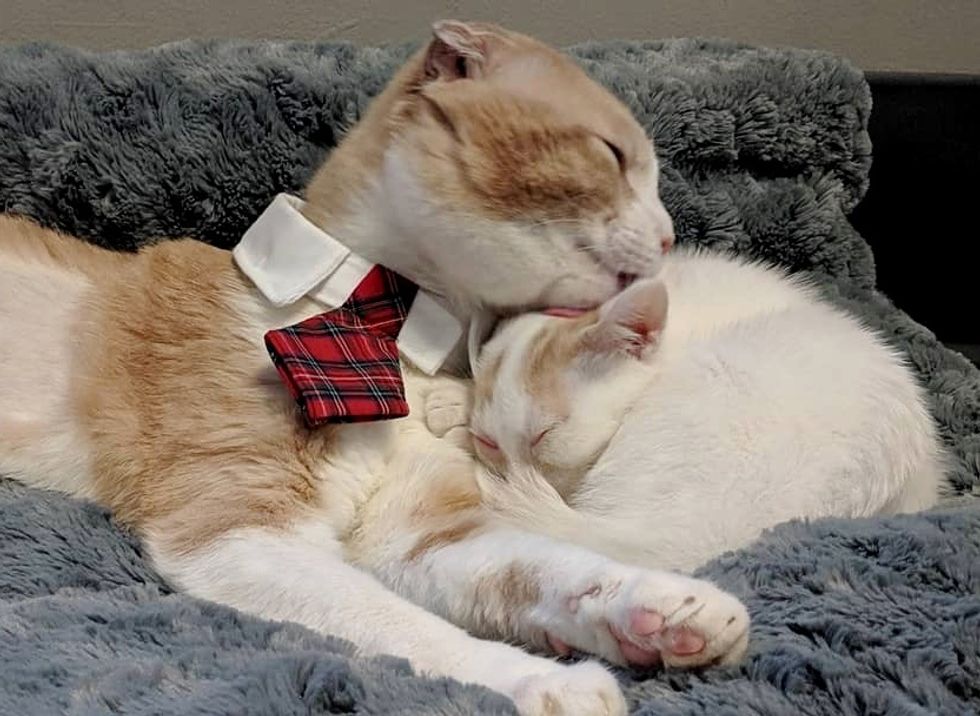 "ET still visits with Fergus and has adopted Skywalker as his little brother. They play pretty rough even though Skywalker is so much smaller than him. But Skywalker holds his own," Rachel told Love Meow.

"He didn't really start to thrive until we gave him a foster parent. Fergus is a great dad and is the best medicine for little Skywalker." 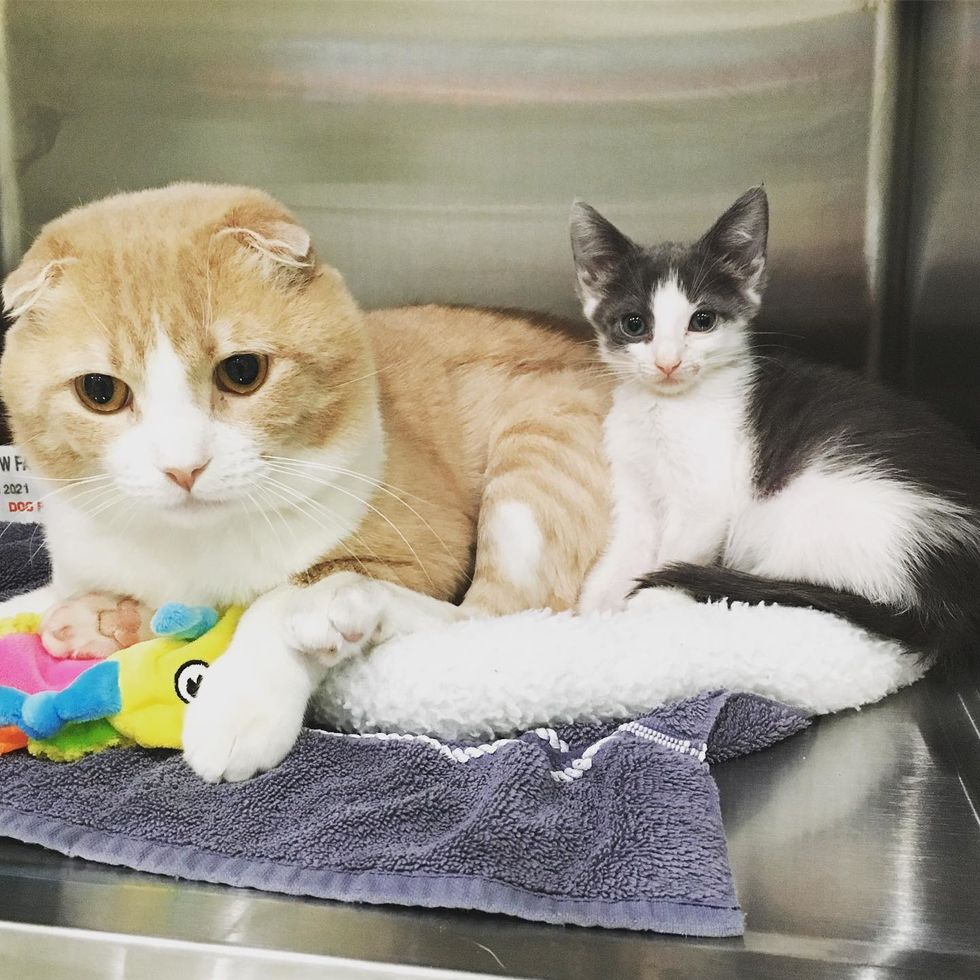