Staff from a local pub in Rotherham, England heard frightened meowing coming from the side of their establishment on Monday and found a little kitten stuck in a dark, narrow gap.

The mother cat was nowhere in sight. The finder couldn't reach the kitten so contacted the RSPCA for help. 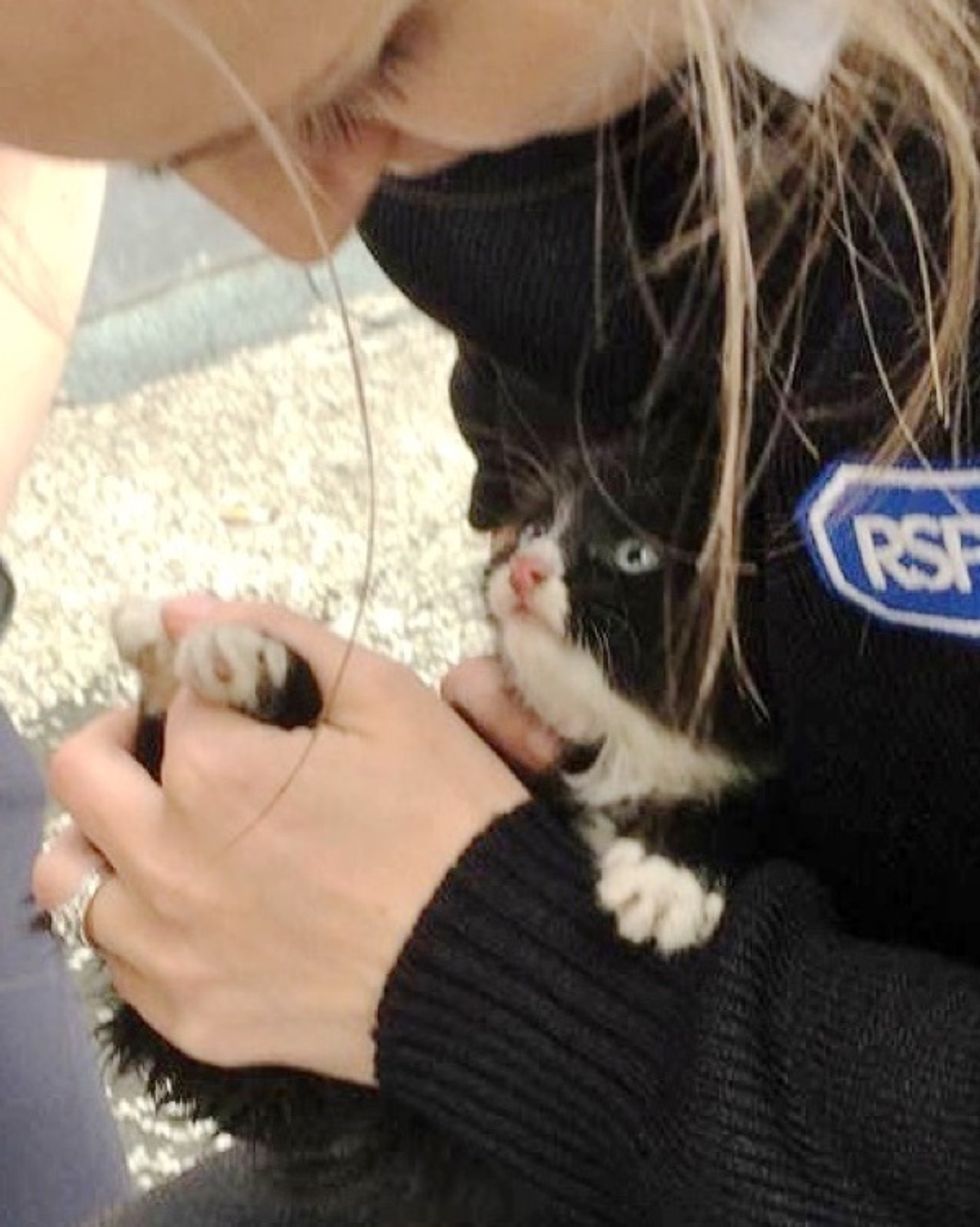 As RSPCA Inspector Sandra Dransfield arrived, she was joined by a colleague and the South Yorkshire Fire and Rescue for the mission.

"This poor little kitten had fallen off the pub's flat roof into a deep gap with no way out but upwards," Sandra said in a newsletter shared with Love Meow.

"It was clear that in order to rescue him, we would have to work from the flat roof above and that proved very tricky, due to the huge drop, the narrowness of the gap and the dangerously rough walls." 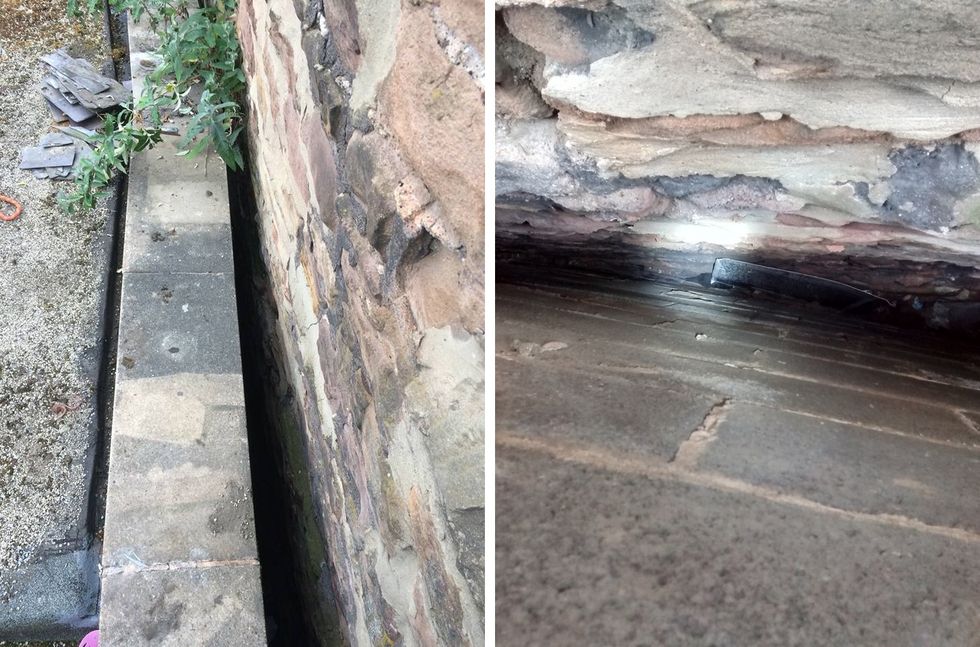 The kitten was terrified of humans as he might be feral. "To make matters worse, there was a lot of debris and rubbish at the bottom, and the kitten kept disappearing from sight."

In order to keep the kitten from going into the even narrower gap, they used two catch pole sets. They weren't able to herd the kitten up with the net, but were able to use the pole that had a crook at the end of it, so the little guy could grab onto it. 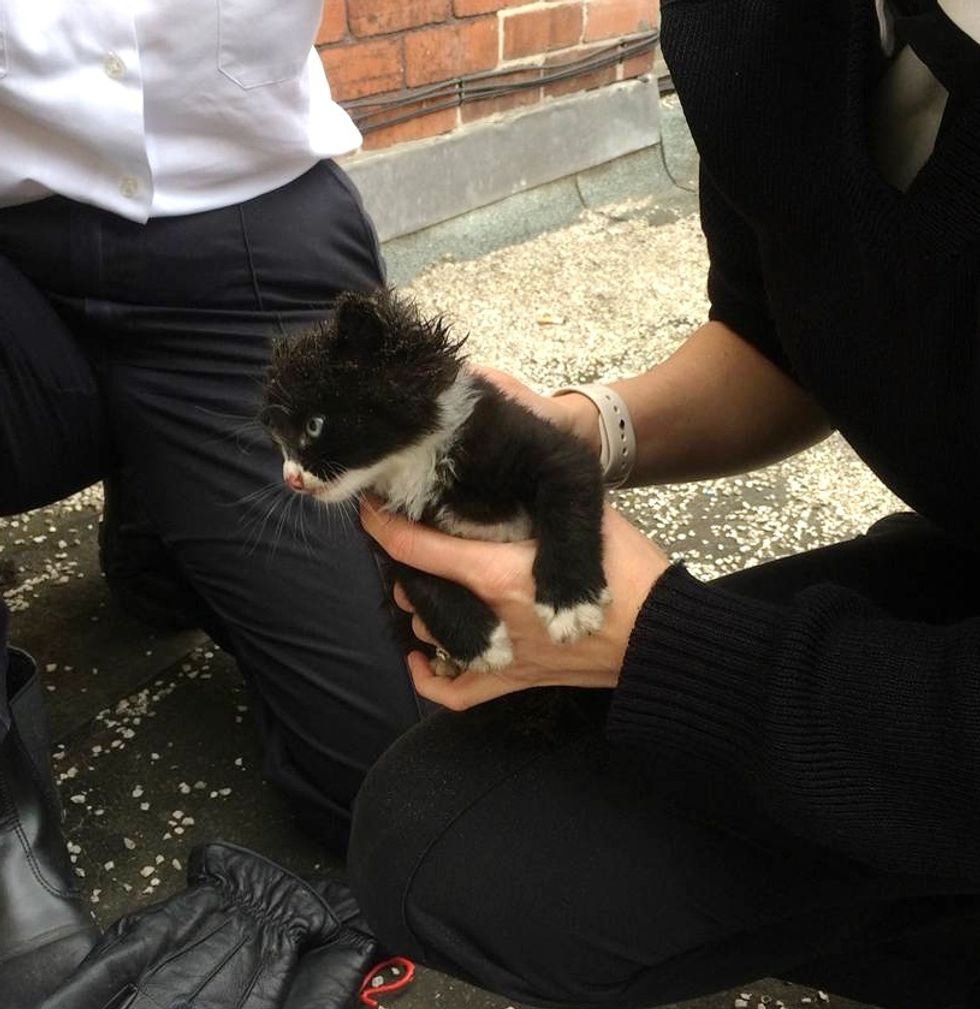 "The little kitten climbed onto it, and we very carefully raised him back up the gap with him clinging on. And just in case he fell off, we held a small bucket underneath to catch him," Sandra added.

It was a 2-hour long rescue mission which ended in a kitten snuggling in a RSPCA rescuer's arms. The kitten was covered in dirt but was able to calm down after getting a few pets.

Cuddling with his rescuer for some much-needed comfort. 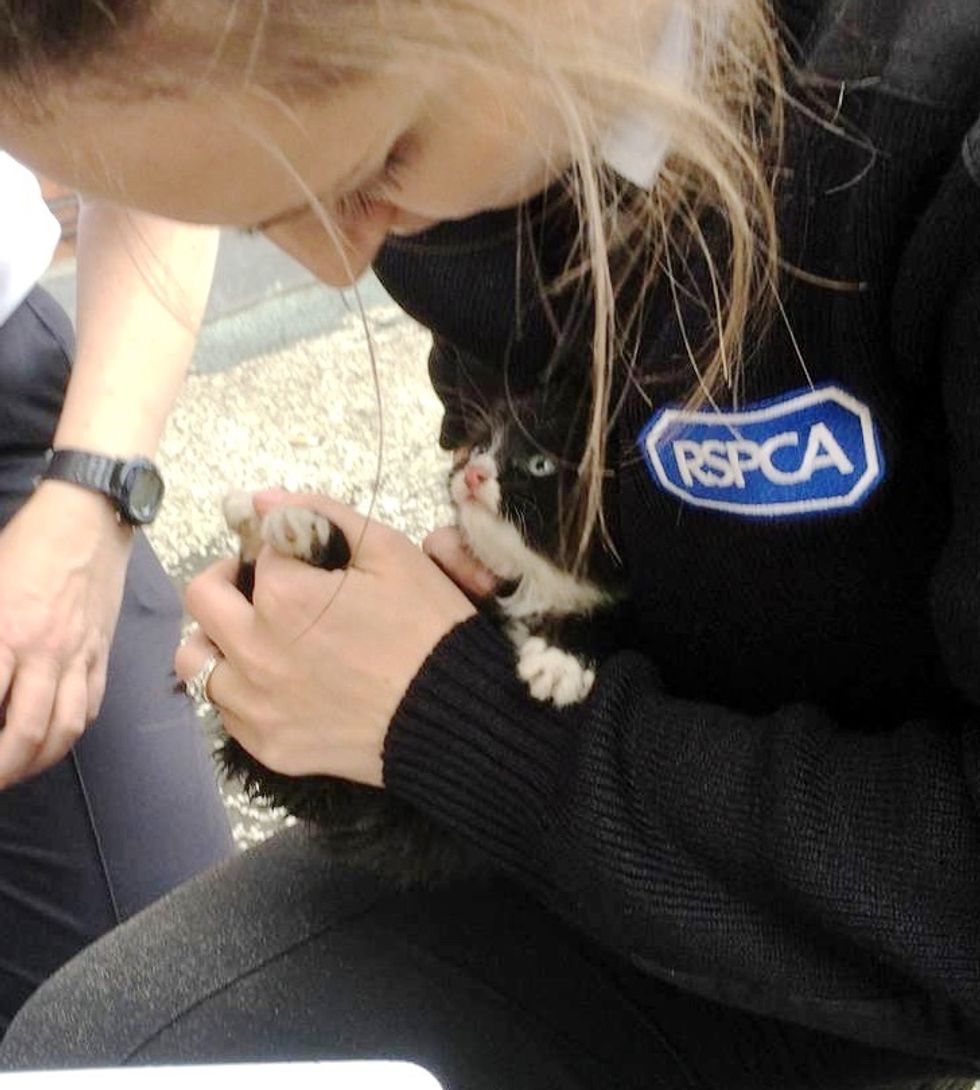 "I took him to Peak Vets in Sheffield, where he is being cared for and closely monitored," Sandra added.

"We have named him Turpin, after the famous highwayman, because he was rescued from the Mail Coach pub." 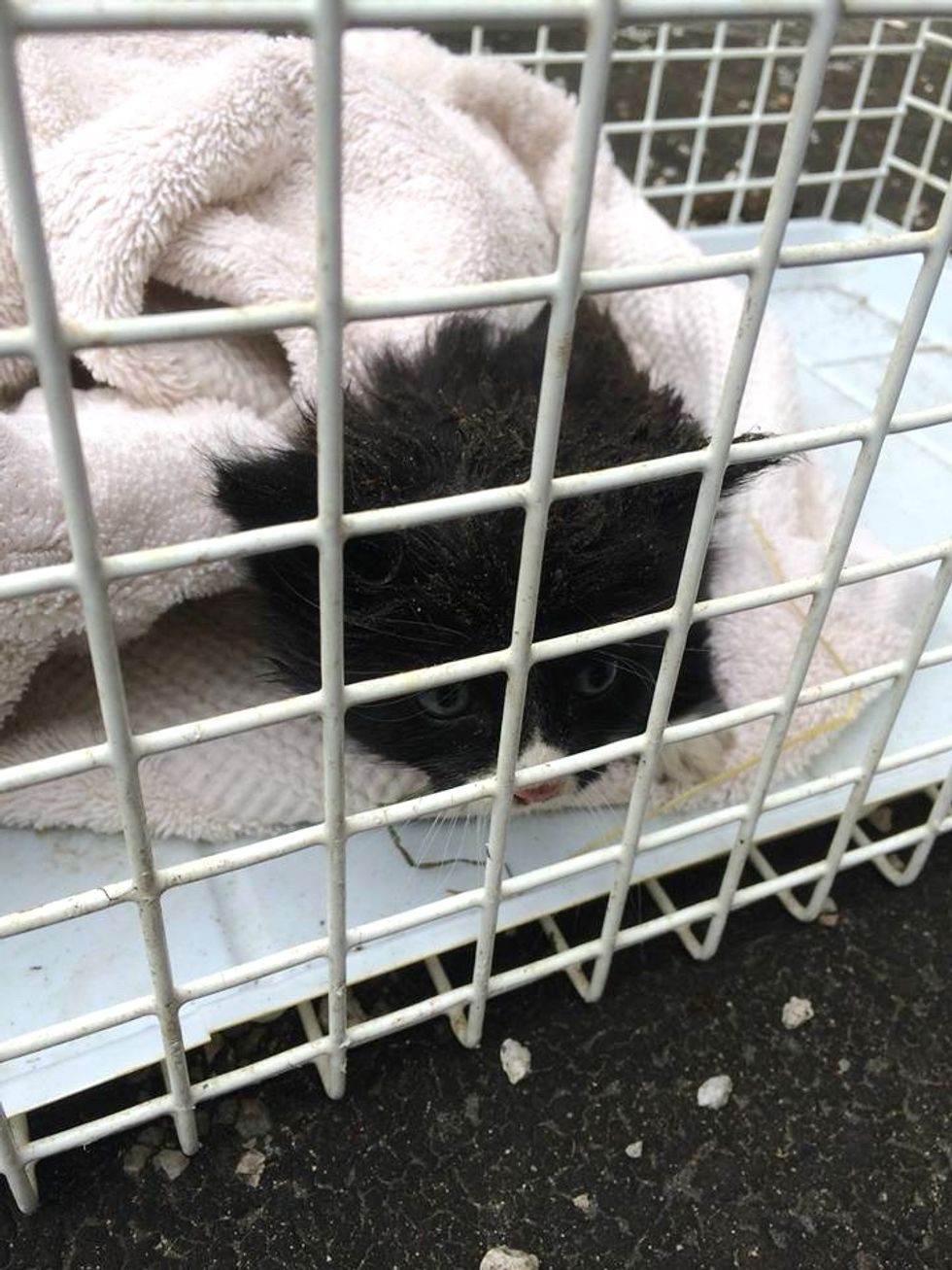 The little tuxedo boy is now on the mend and working his way to full recovery.

"We are hoping he can join a group of four other kittens I had rescued earlier that day, which are now at the RSPCA's South Yorkshire Animal Centre in Bawtry. When they are old enough, we hope they will all find forever homes." 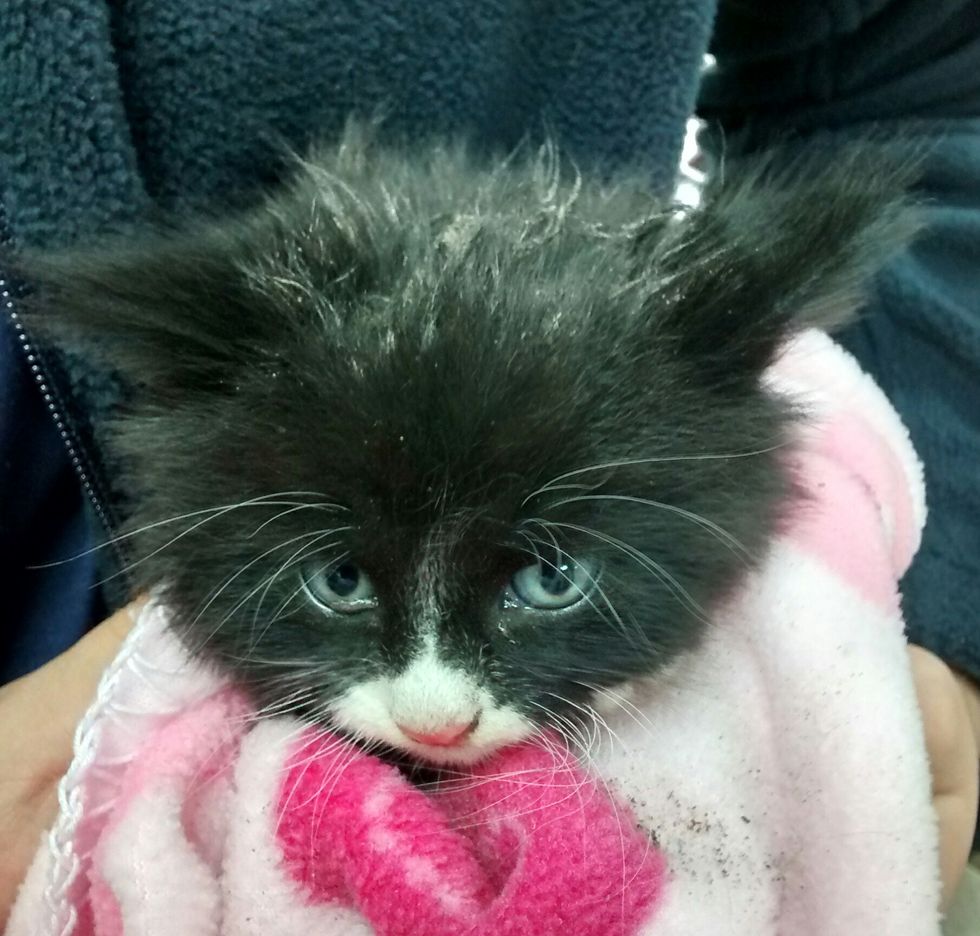