A tiny feral kitty crept her way into a couple's hearts. They weren't looking for a kitty at the time, but when the little tabby looked at them with her sorrowful eyes, they didn't stand a chance. 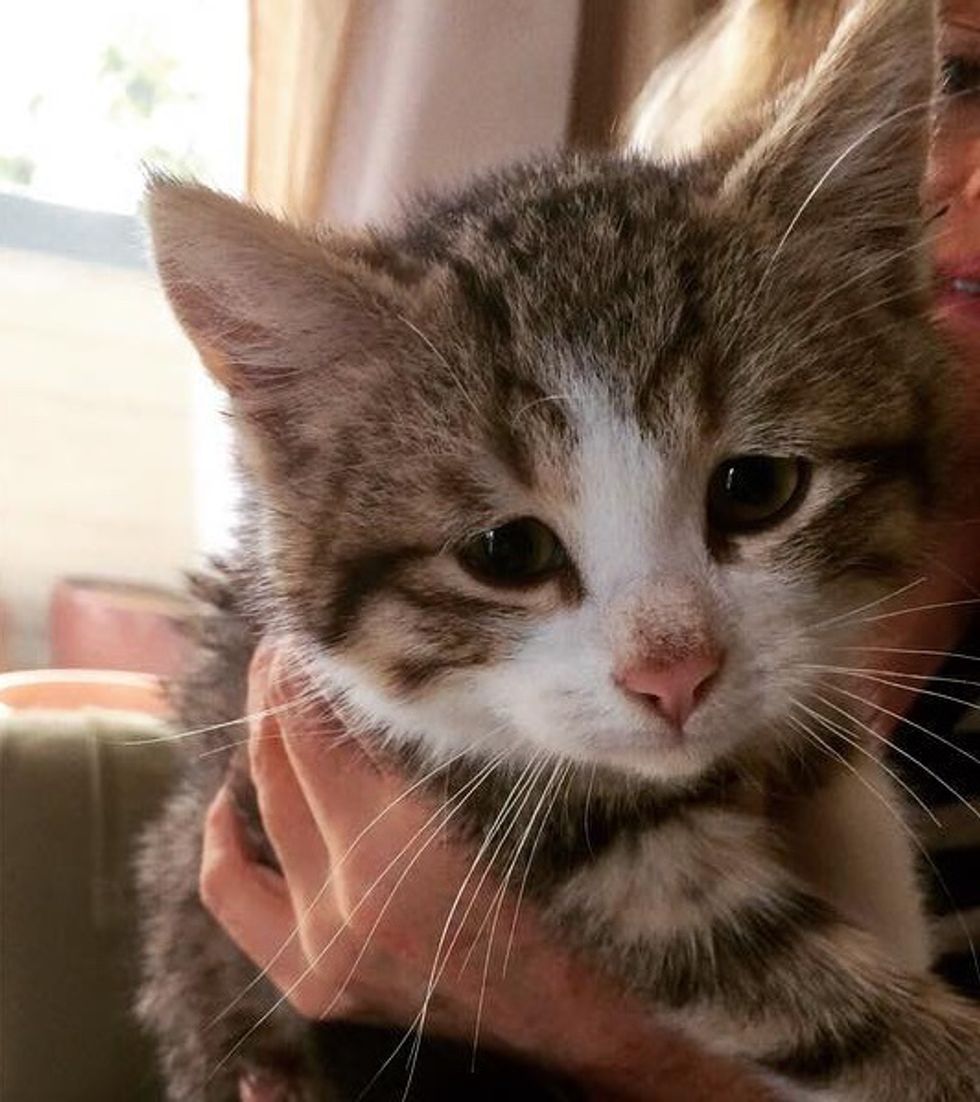 Mami was found along with her two brothers (Louie and Henry) and cat mother in a dumpster at a high school. It was in the middle of winter, and the feline family tried to stay warm huddled up against each other.

They were taken in by rescuers for a chance at a loving home. Mami was the most anxious. Though she was fearful and would flinch away from humans, deep down, she really wanted someone to love.

Sinead Brooks and her then boyfriend (now husband) from San Francisco met little Mami through their friend. It was love at first sight.

"We were not looking for a kitten at the time, but there was no way I could go on without her," Sinead told Love Meow. 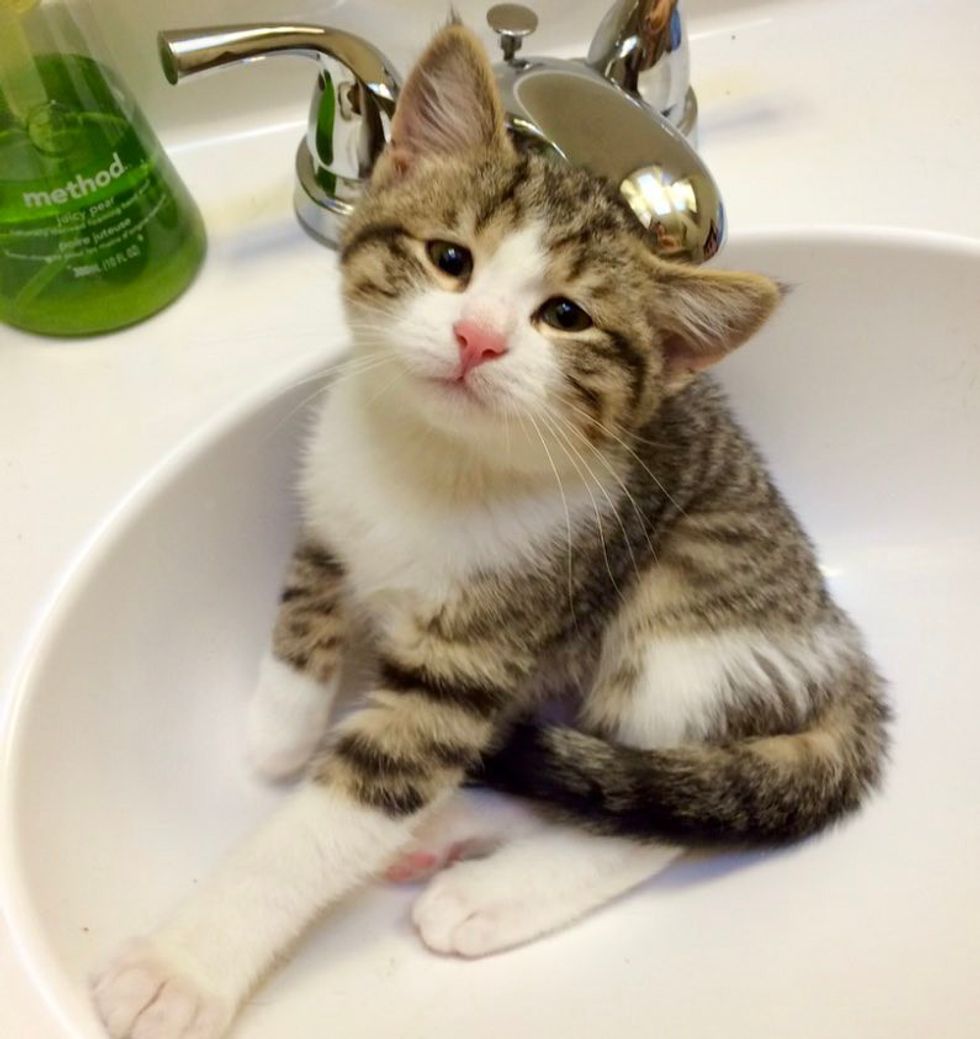 Mami was very shy and her eyes seemed to tell a story. After she moved into her new home, she would hide behind the toilet and hiss at her humans if they were near. It took her a few weeks to feel comfortable enough to come out from the bathroom, but she did it!

Sinead spent hours upon hours to help the little girl learn to trust and love. 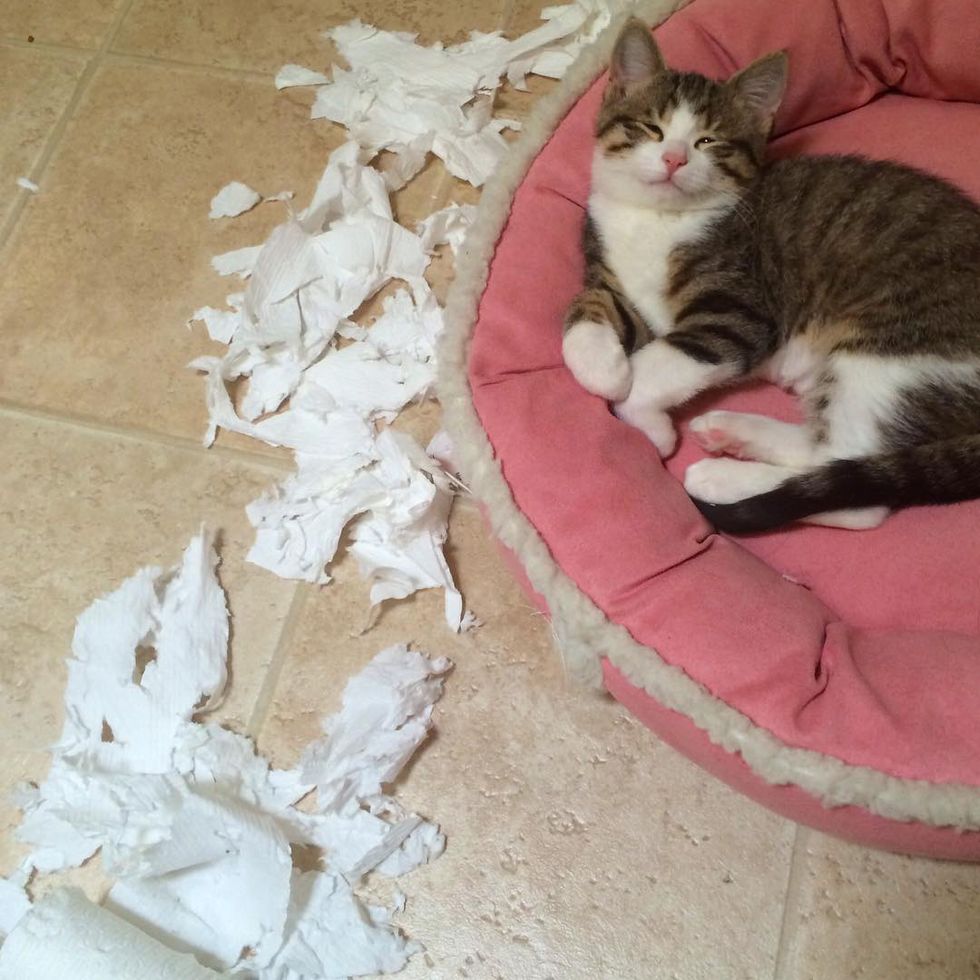 "I have had cats my whole life and would get so frustrated sometimes when she would act scared of me or a noise I made. But we did a lot of reading on feral cats and cat behavior and have used that to help understand her and help her," Sinead told Love Meow.

"Mami really turned a corner in her timidness in the last six months." 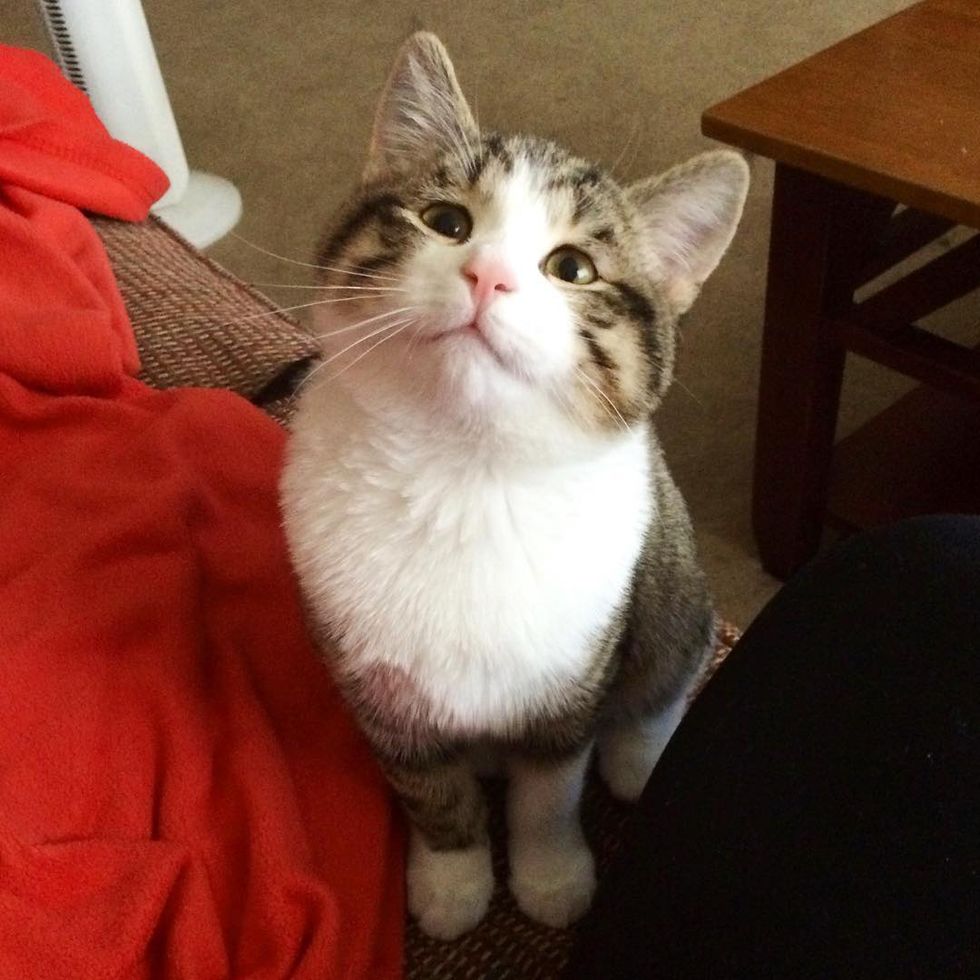 While her human mom was working from home, Mami became much more accustomed to noises in the house and even learned to relax.

She learned that her humans weren't so bad. Then one day, out of the blue, Mami decided to cuddle. 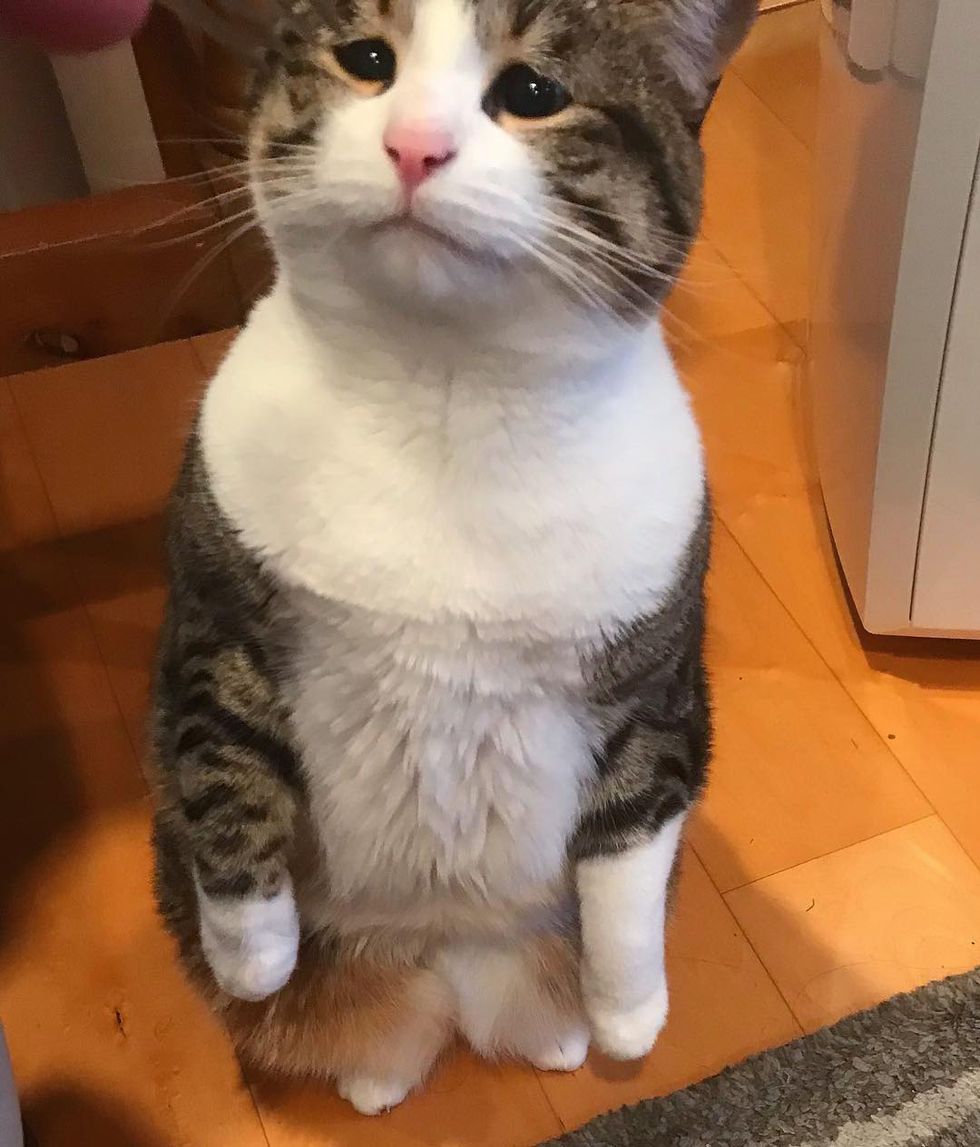 Mami mustered her courage and reached out her paw, asking her human for love that she'd been so eager to get all along.

"She doesn't bolt now when someone comes over. In fact, she is relaxing on the couch about two feet from me right now snoozing away! I am not sure what clicked for her, but she is much more social, very vocal and affectionate with us and visitors." 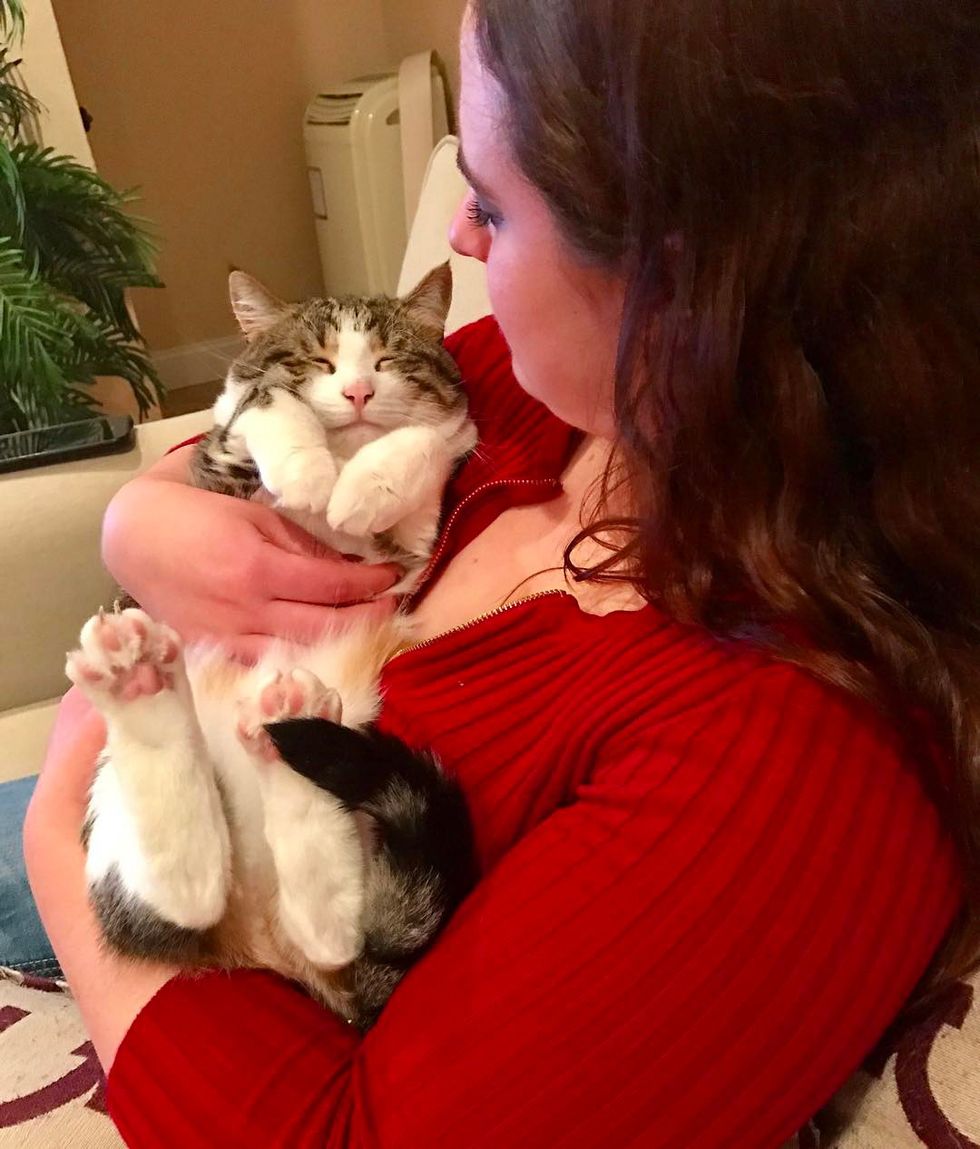 Ever since they brought home another kitty, Morty, the new feline brother has helped Mami blossom even more.

"He is a spazzy, energetic, all boy cat and he showed Mami how to really behave like a cat. She watched him let us pick him up and him sleeping on our laps and saw that its safe to do that. They also love and groom each other all the time - its SO cute!" 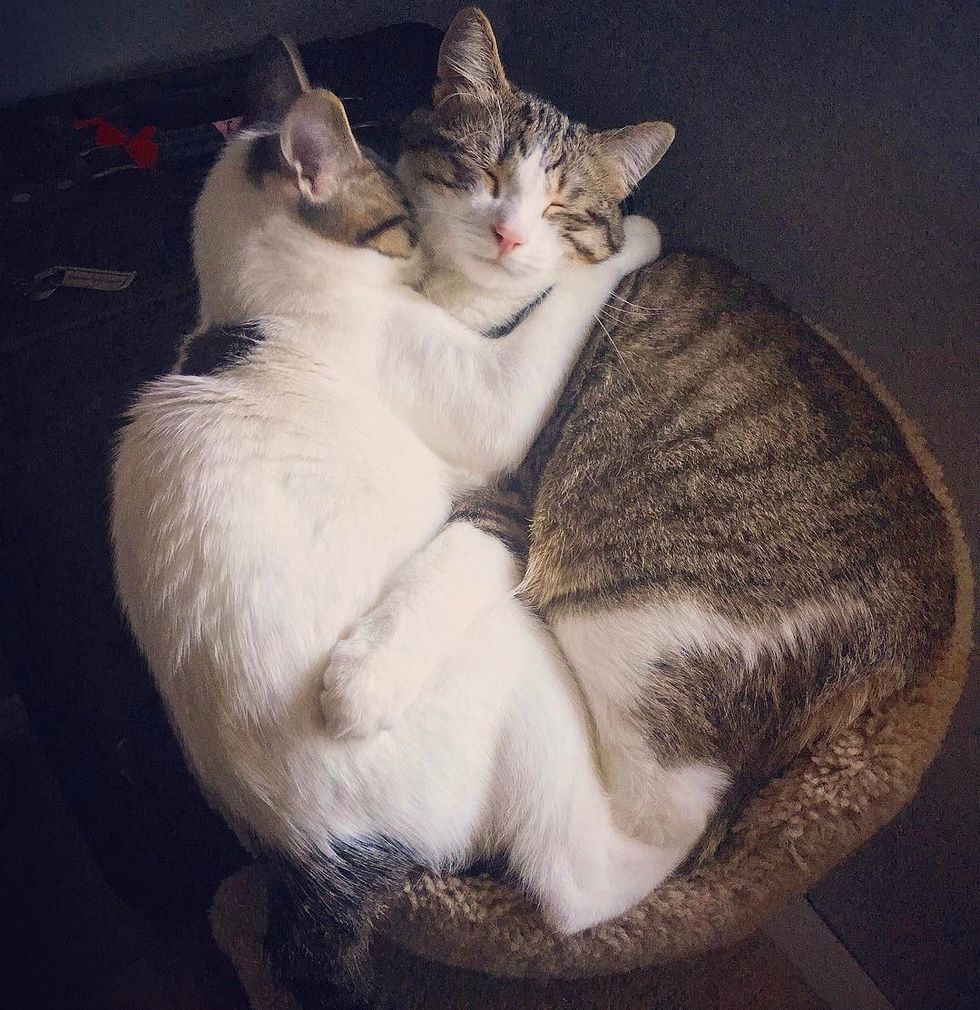 "Her personality is truly that of an angel! She loves affection, toys, treats, and cat nip," Sinead told Love Meow.

"She is sassy and often meows to let us know she is arriving in the room and to clear a spot for her." 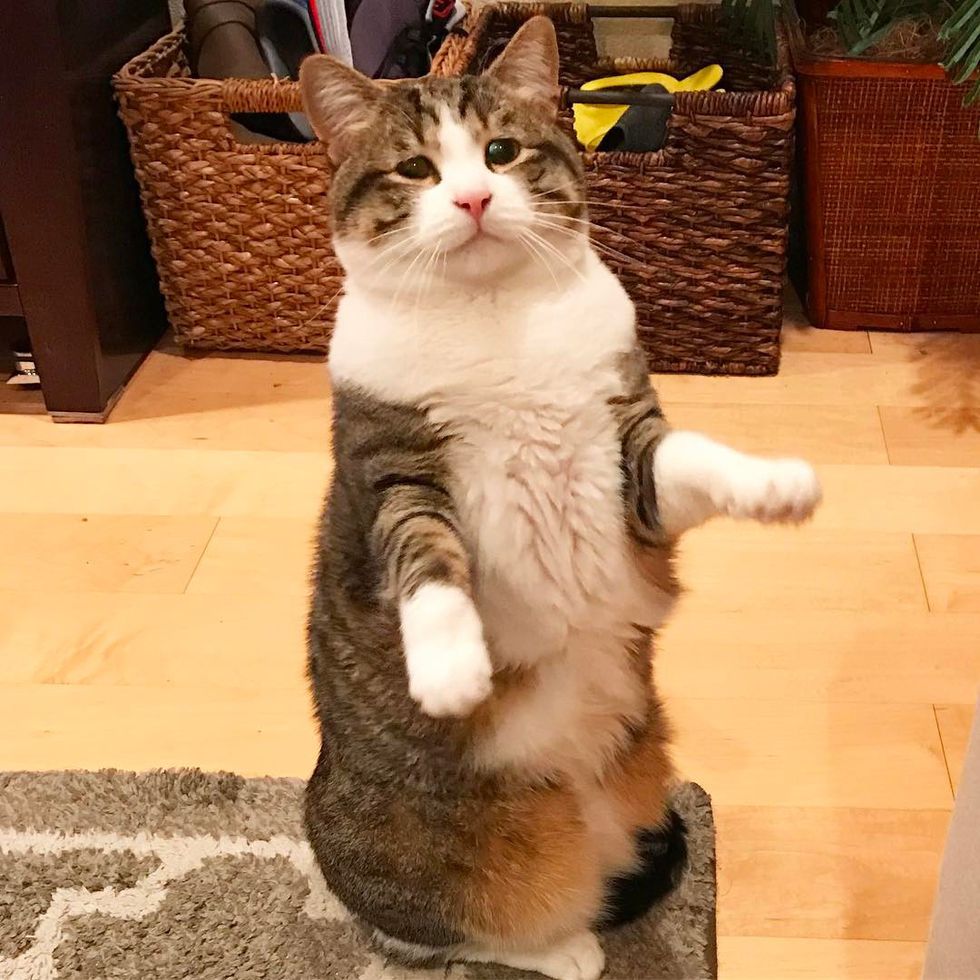 "She also will paw at your arm if you stop petting her before she is ready. She doesn't love to be held, but hey, baby steps right!" 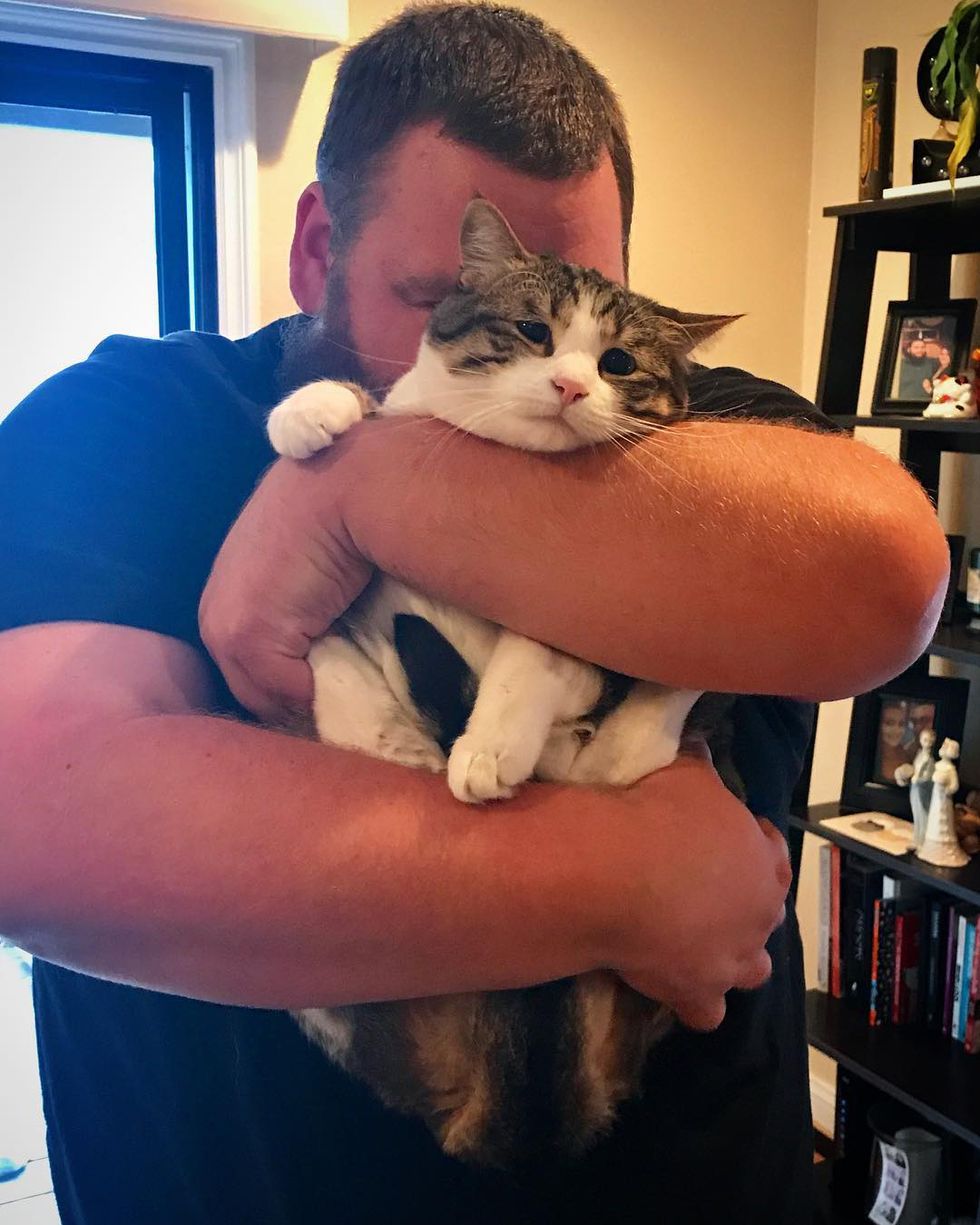 Mami has come a long way since day one.

"Are you sure you want to travel without me?" - Mami 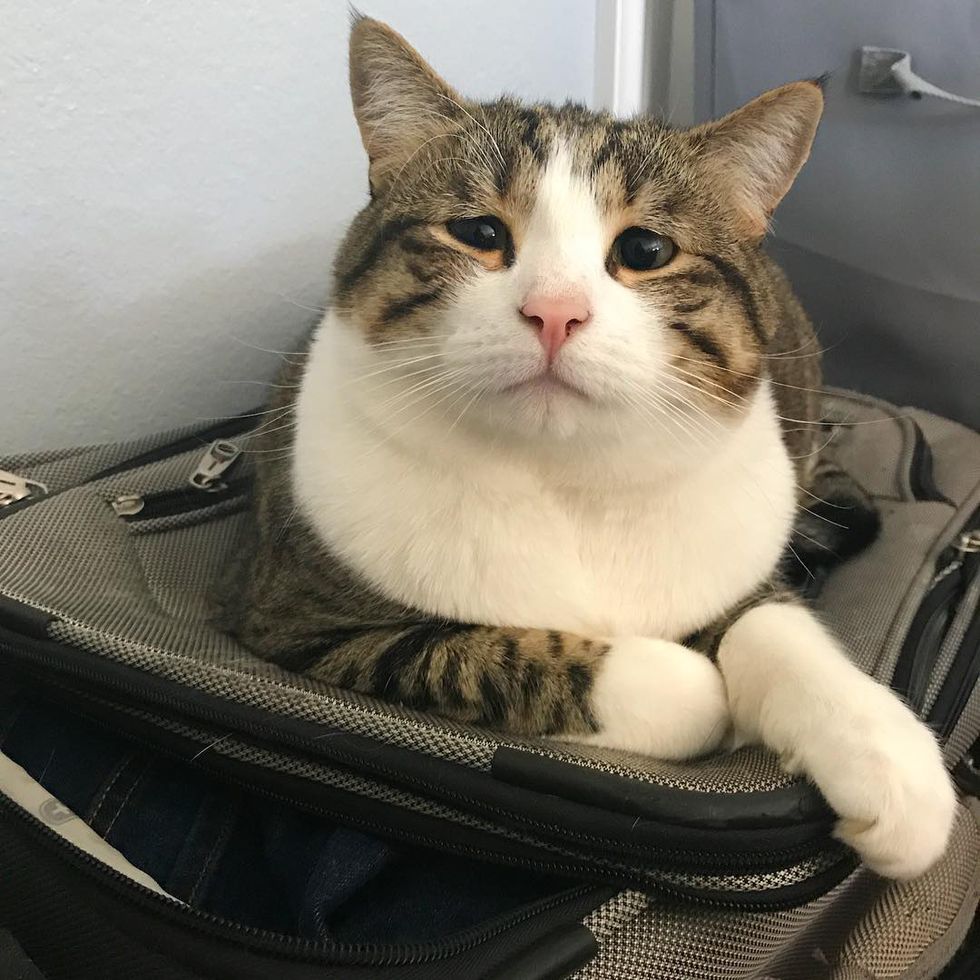 "She is honestly the sweetest, most affectionate baby I've ever had and I wish people got to see that more!" 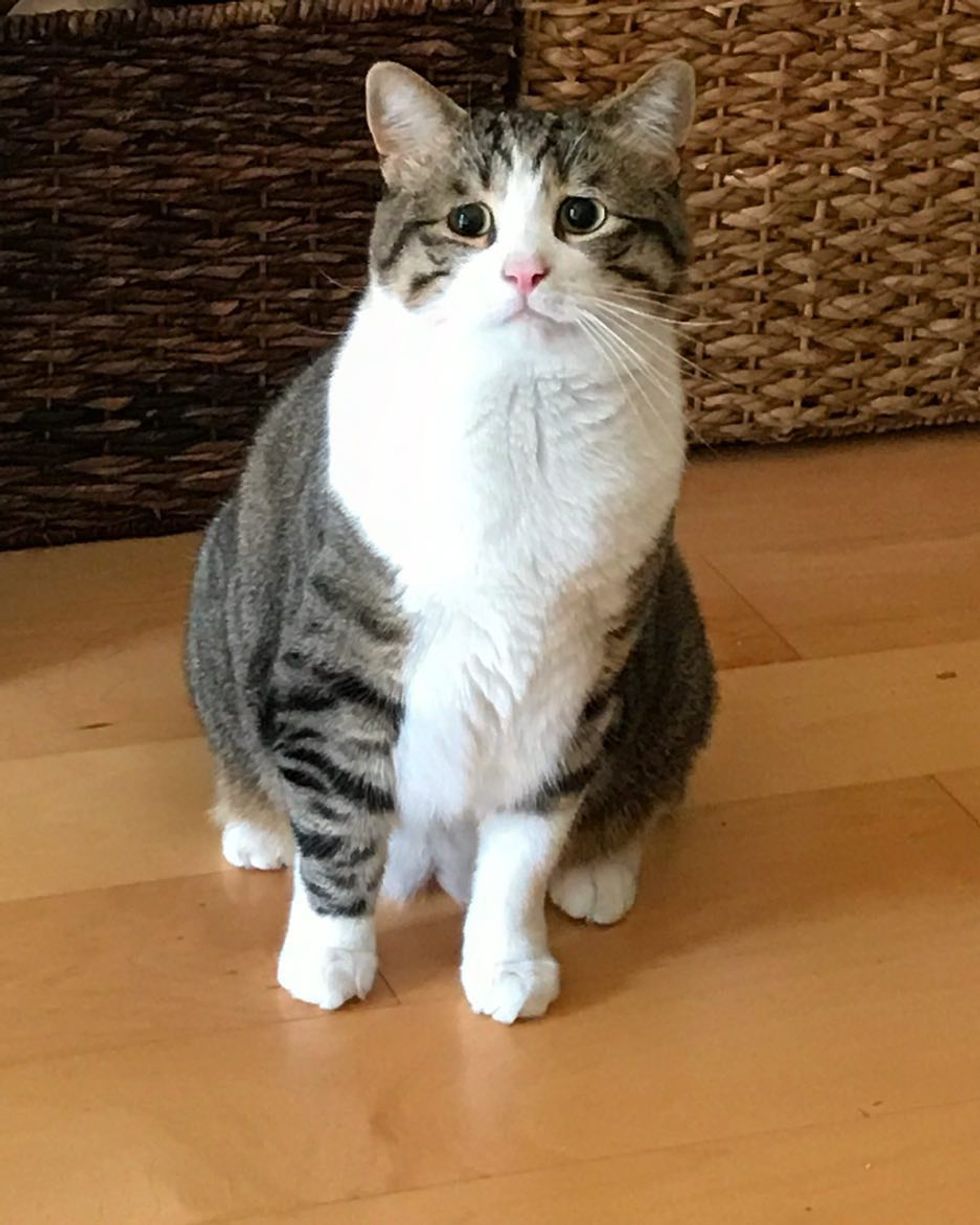 Mami is always watching and supervising. 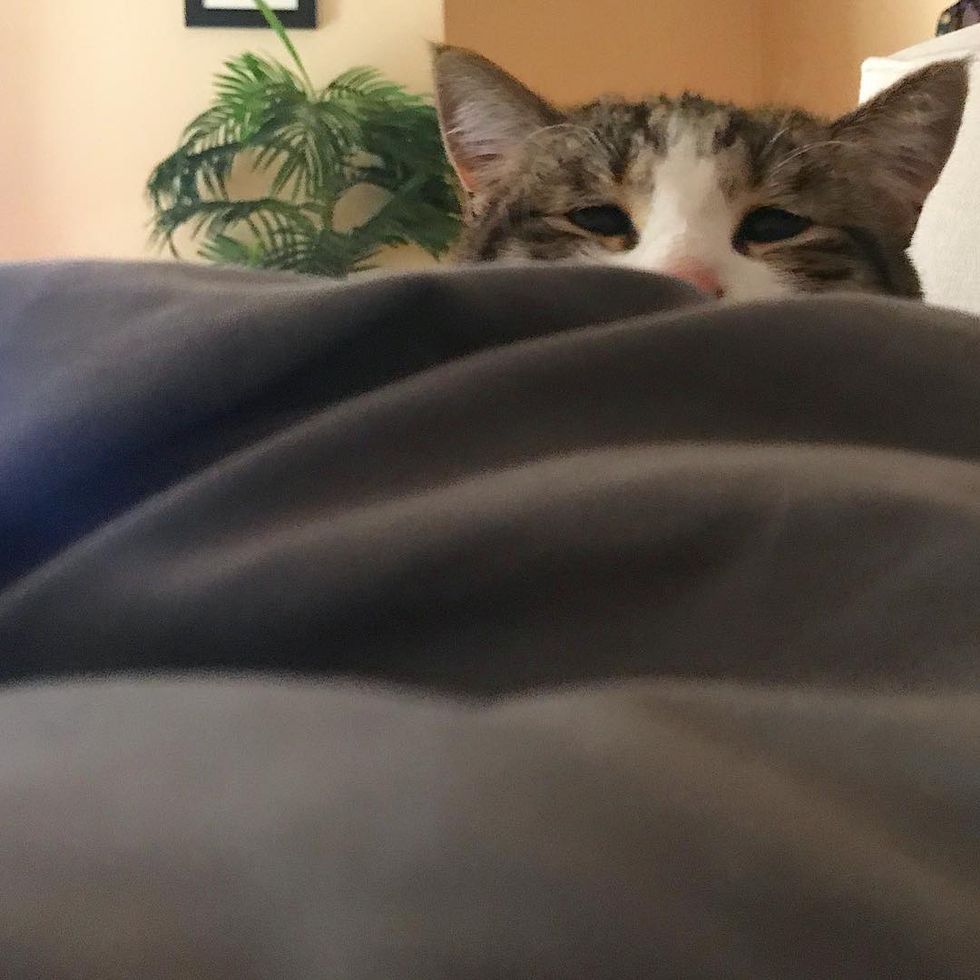 She has the perfect puss-in-boots eyes!

Whenever she asks for something, her humans happily oblige. Who could possibly say no?! 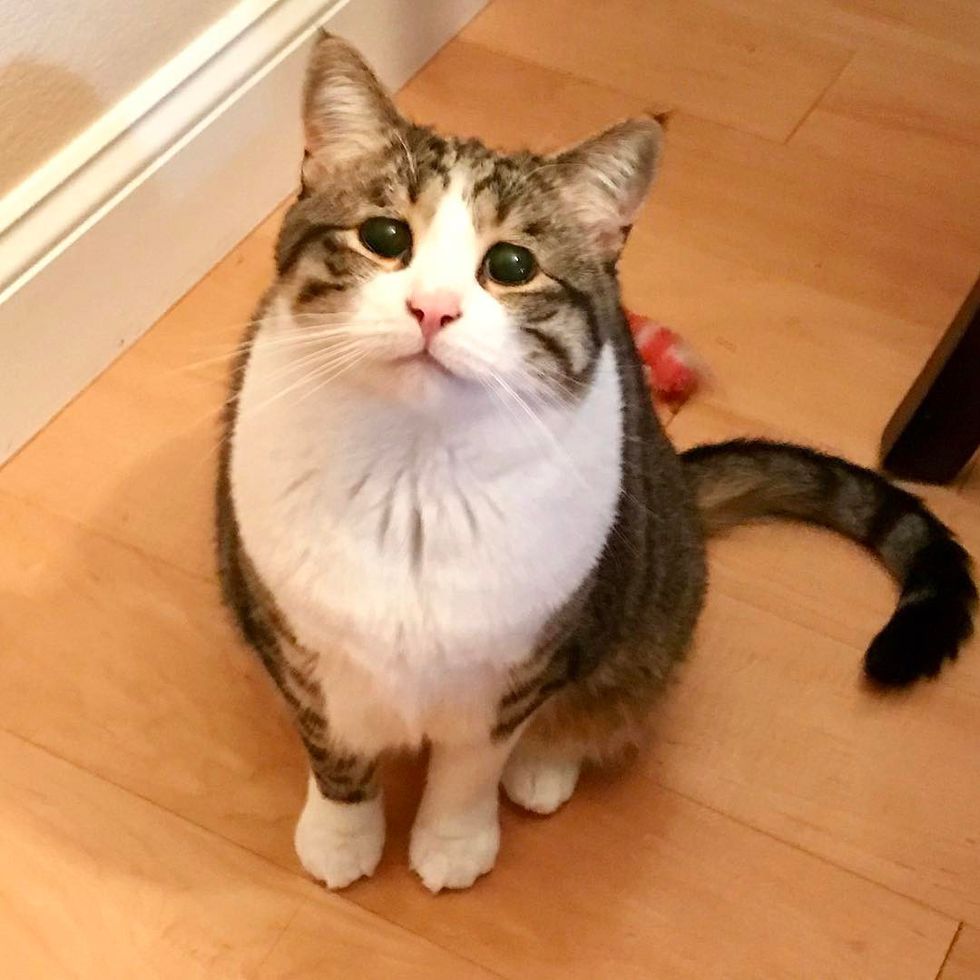 "Building trust with Mami was, and will always be, an ongoing process. She will be three later this month and there are still days when something like a sneeze will scare her under the bed," Sinead told Love Meow.

But Mami knows she's found love. The sweet girl adores her human parents and little brother to bits. "She is the most tender-hearted sweet baby and a great sister to Morty." 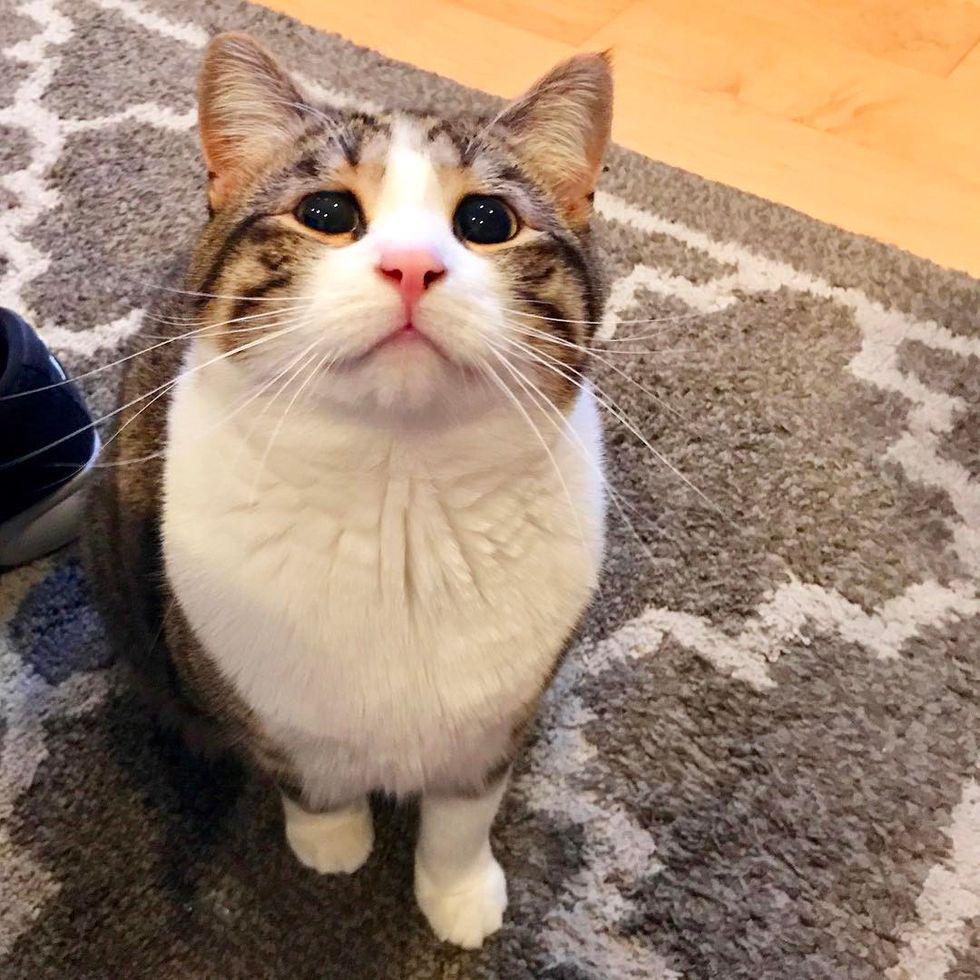 When she wants something... :)