A kitten with a twisted leg shows incredible fighting spirit and insists on walking on all fours. 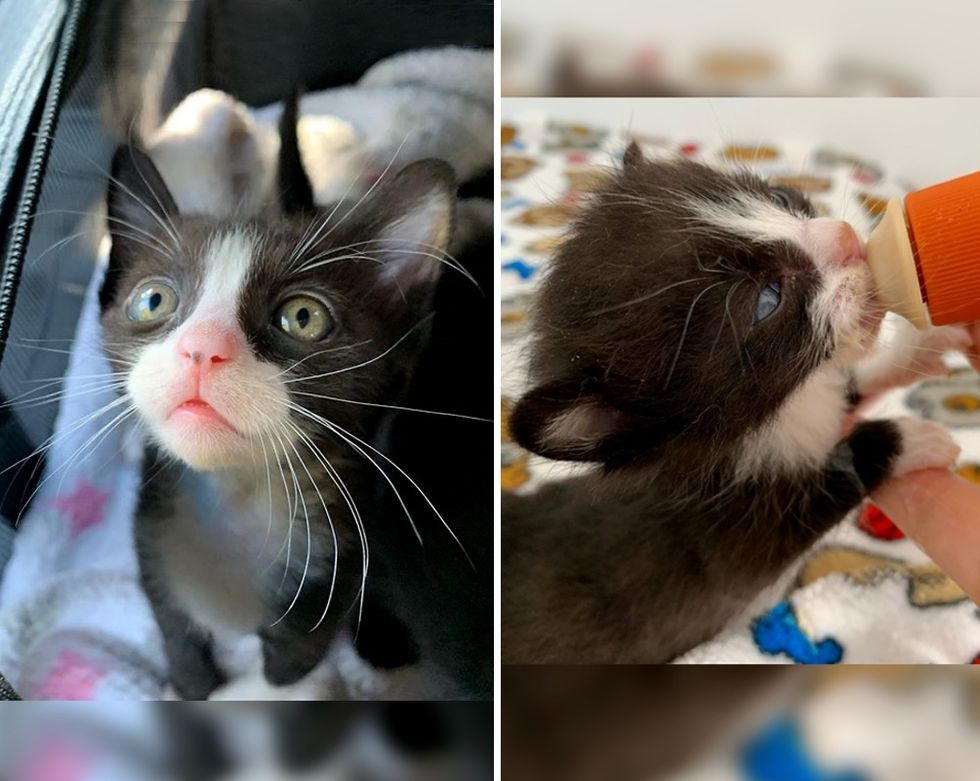 A tiny tuxedo kitten was brought to a shelter in California early last month. He was just palm-sized and came with a twisted leg. Despite being so little, he was very vocal and determined to live.

Alley Cat Rescue in Los Angeles was at the shelter to pick up two litters of kittens when they were asked about the tiny singleton. "We were asked if we could take one more with a leg deformity. How could we not," Alley Cat Rescue shared with Love Meow.

"We had not seen him until he was brought to us in a carrier shouting as loud as he could. We just adore little feisty babies and see it as a really good sign." 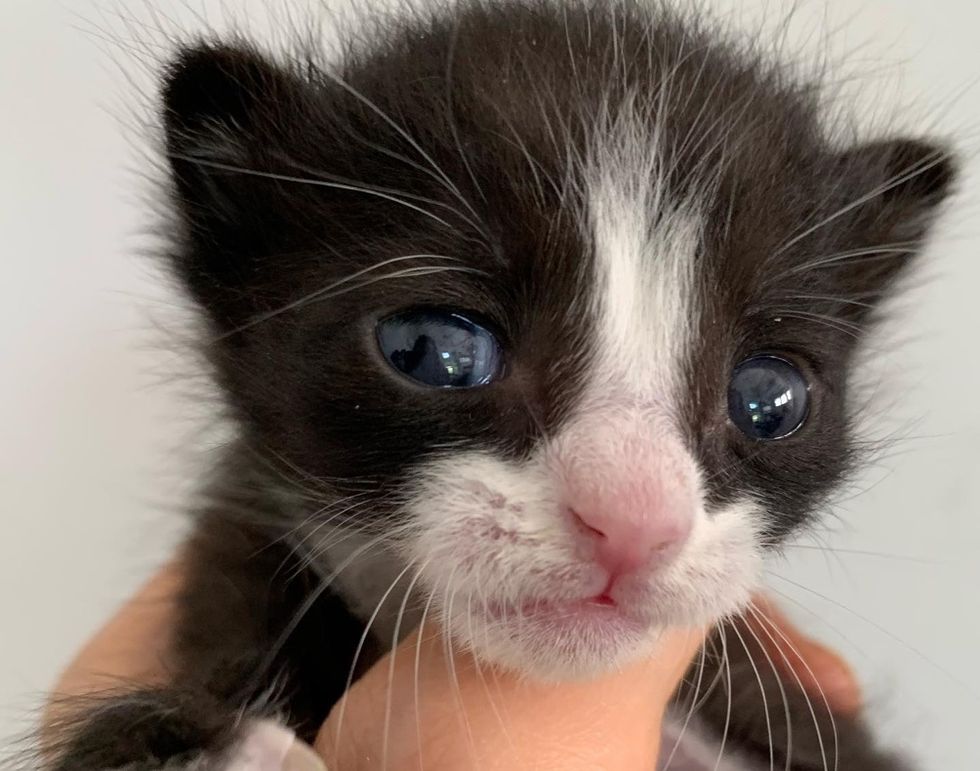 They named the tuxedo Panda and started around the clock feedings, in hopes of getting his weight up. The tiny bundle of joy latched onto the bottle right away and gobbled down the formula like a champ.

"He started to purr and meowed like crazy when he saw us, as he knew food was on its way," Alley Cat Rescue said. 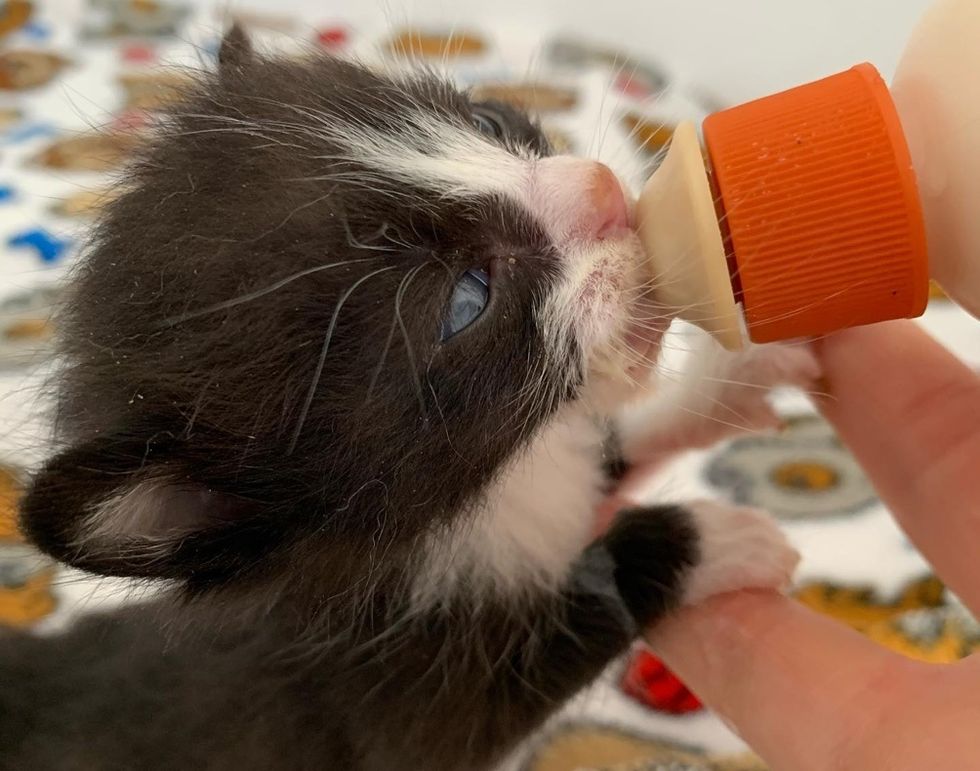 Panda put on weight and gained strength steadily each day. His caretakers began slowly and gently massaging his little foot and warming the ligaments to help reduce pressure. They also used laser treatments to decrease inflammation and pain.

In just one week, the kitten almost tripled in weight. "We do a happy dance every time he is on the scale! We do physical therapy on his leg each day and won't give up trying." 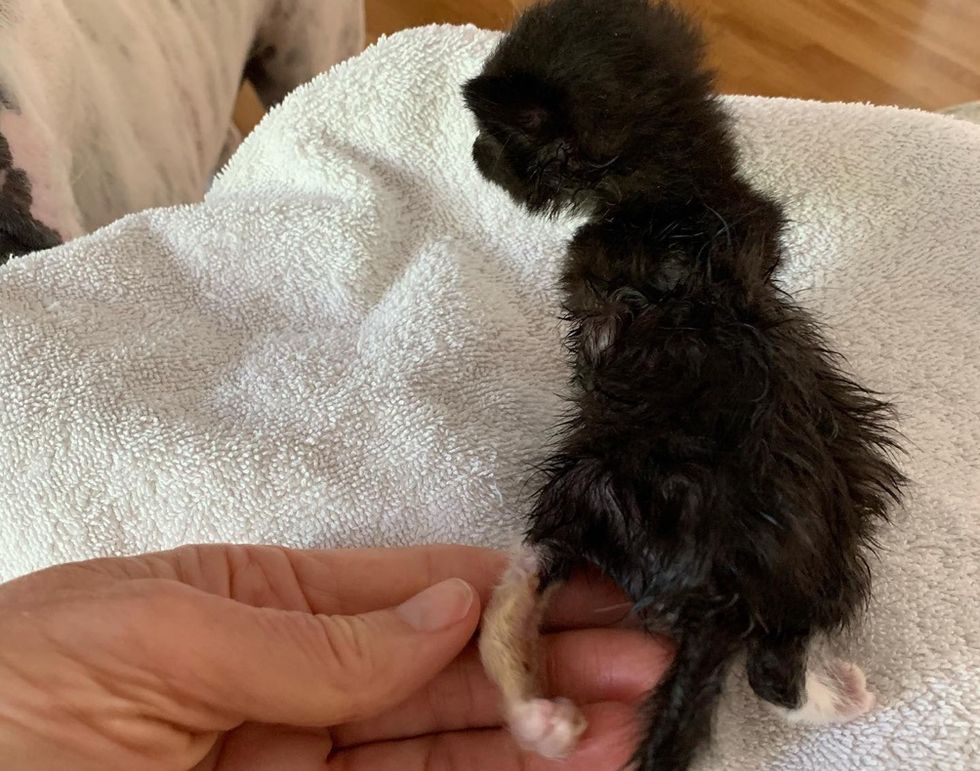 As soon as Panda was strong enough to hold his own, he started to waddle about. His left hind leg was still a work-in-progress, but the brave little guy wasn't going to let it stop him.

"Playing really helps, as he rolls from side to side. We are trying to get him to push more with that back leg. He loves belly rubs and is just adorable." 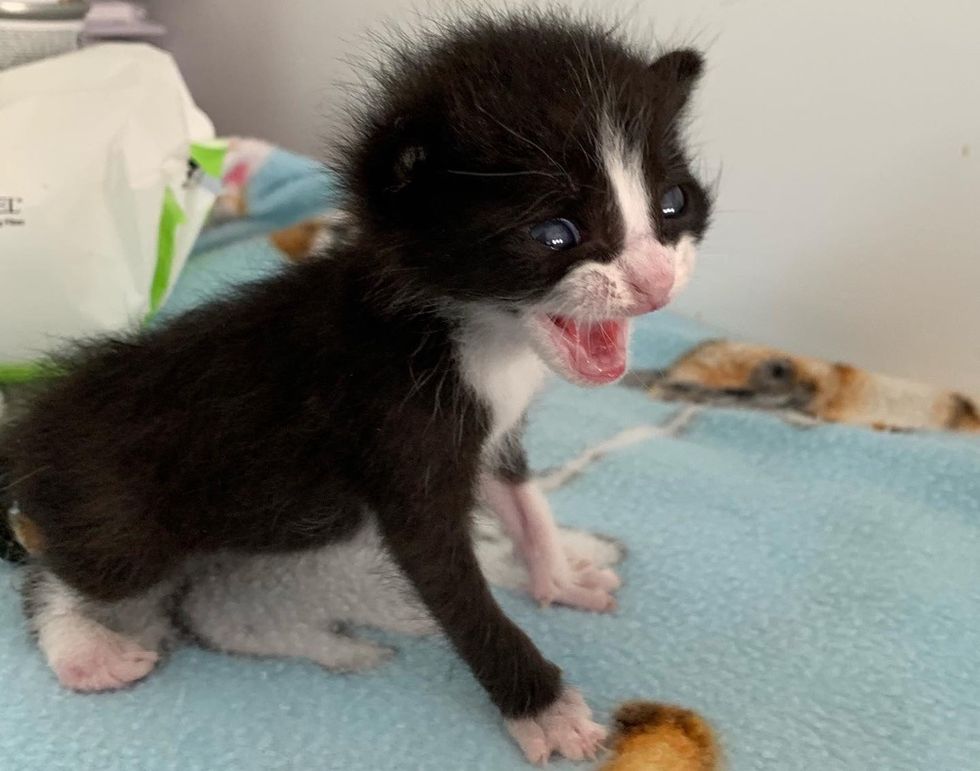 While his caretakers diligently worked towards improving his little back leg, Panda continued to live life to the fullest. He would run up to greet his people every time they came in the room, and would play with toys with so much vigor.

"He tries hard to climb up scratch posts and the side of the play pen, and is ready for the big world." 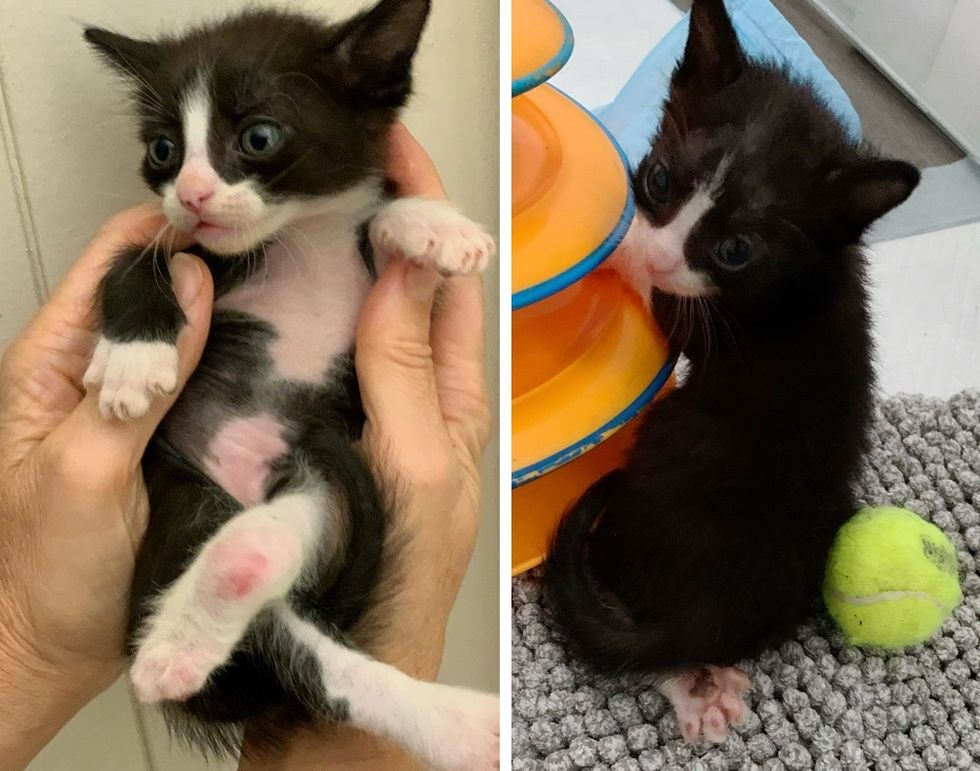 As Panda became stronger, he was getting more mobile and rambunctious. To help his leg heal, he was put in a temporary cast to protect the joint of his foot.

"He had twisted it completely around, and it was limiting his ability to move around and play," Alley Cat Rescue shared. 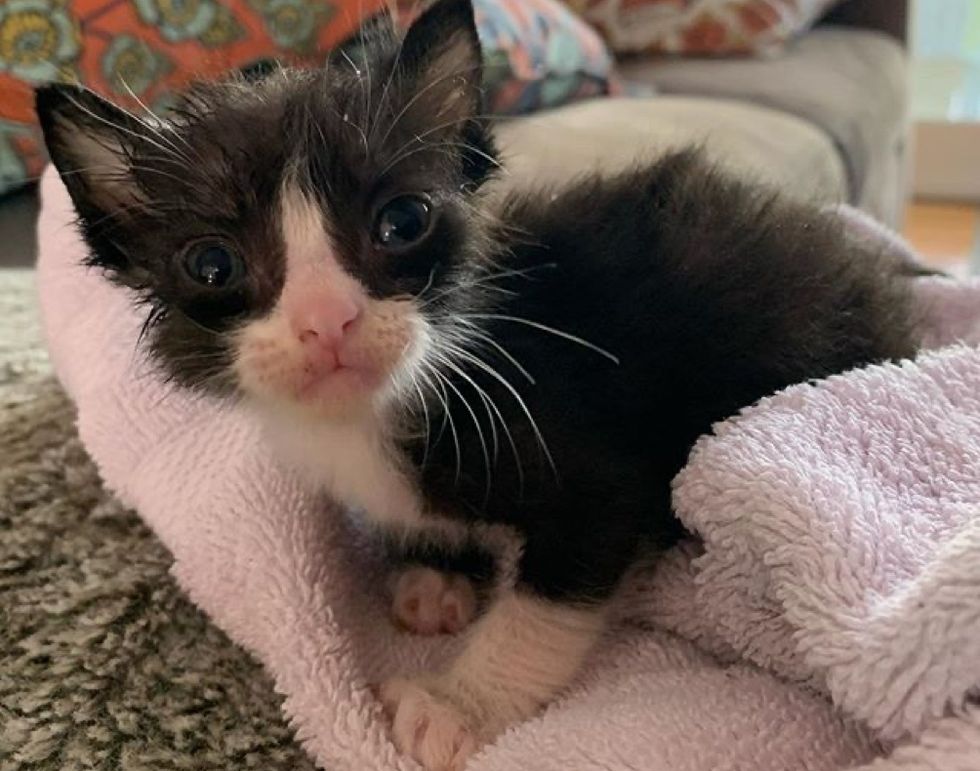 "We will do whatever it takes to try and save his back leg. Cats do fine as tripods, but with these little guys, we prefer not to have to do surgery if it can be prevented."

The little tuxedo is always in good spirits and insists on doing everything just like other cats. 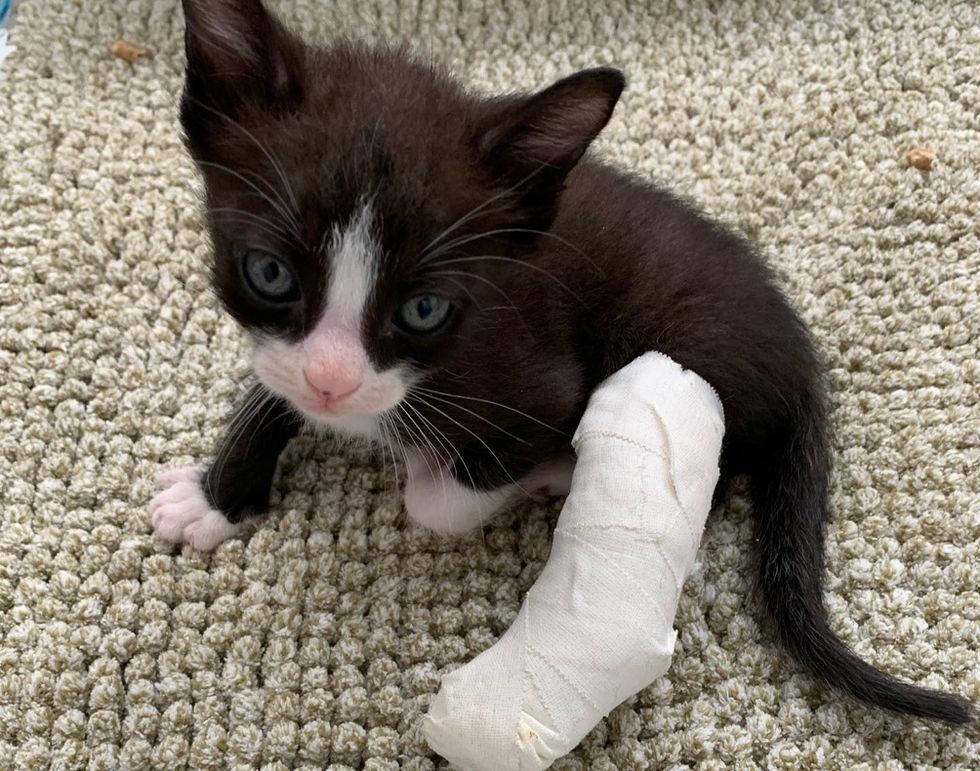 Panda has made incredible strides and started using his back leg to walk. No more dragging his foot around as the kitten has figured out how to use his toes to help him move around and navigate.

Watch Panda walk on all fours in this cute video:

Knowing that Panda could benefit from having a friend, they paired him up with another singleton, Panther.

"He became fast friends with Panther. He is happy to cuddle with Panther and they go everywhere together, even the vet!" 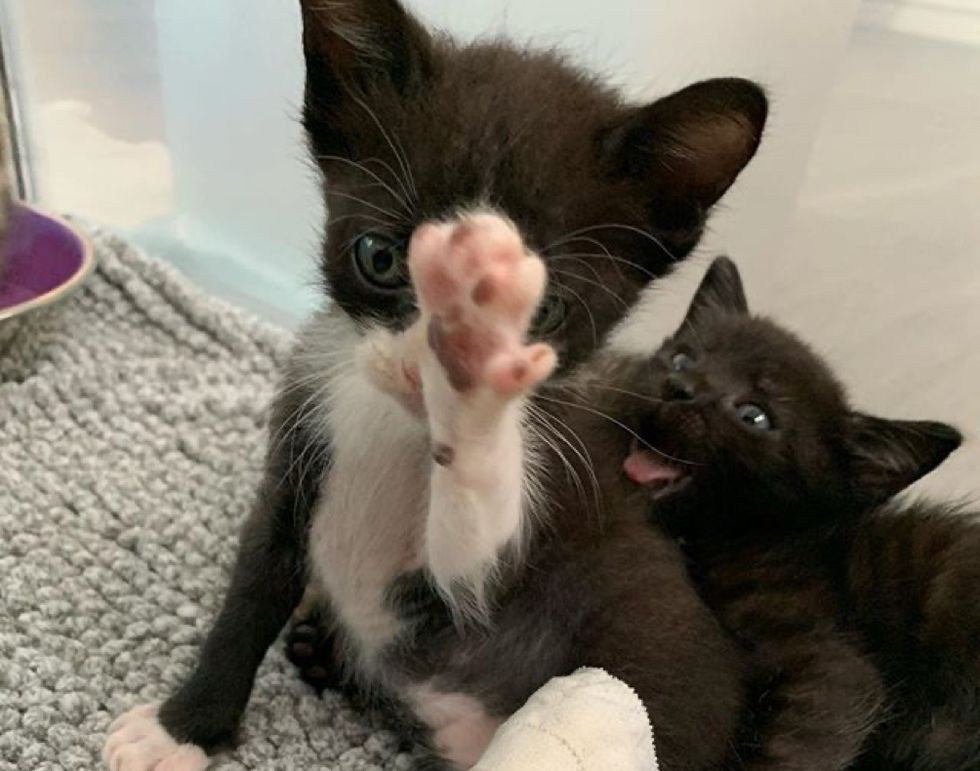 After weeks of physical therapy and tireless efforts, the hard work has paid off.

"Panda now can climb into the sofa. We are focusing on that back left ankle and each week are seeing huge improvements," Alley Cat Rescue shared with Love Meow. 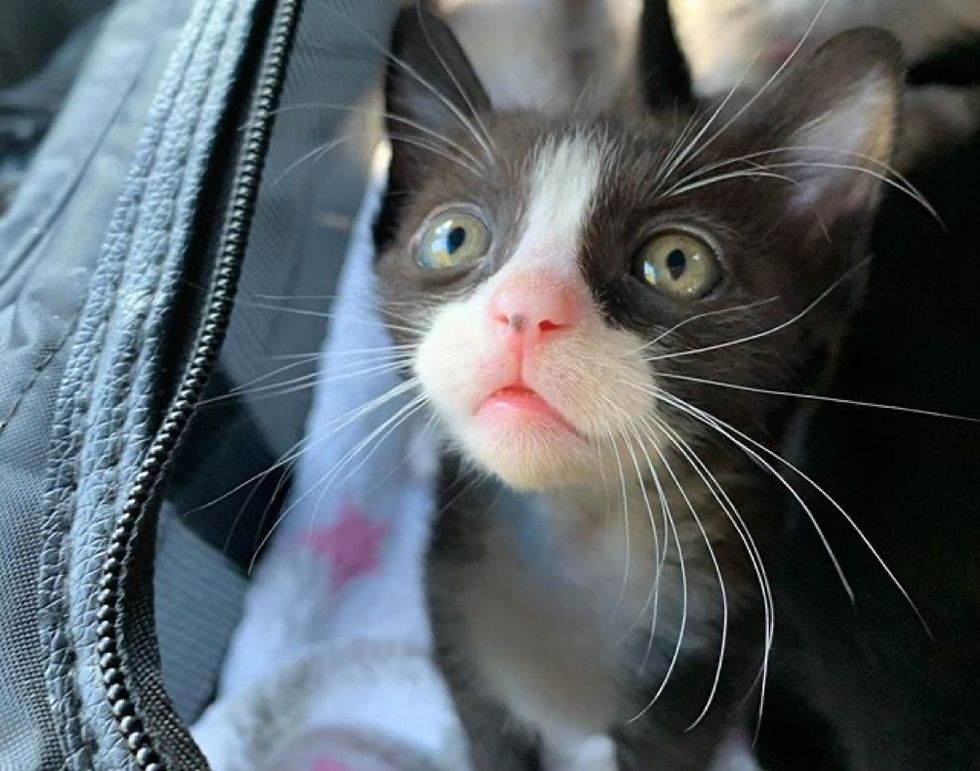 The tuxedo is now playing and creating antics around the room like he ought to be.

"Our vet was amazed at the transformation. He has a little way to go, but having a wonderful team and a buddy like Panther to encourage him to explore makes all the difference!" 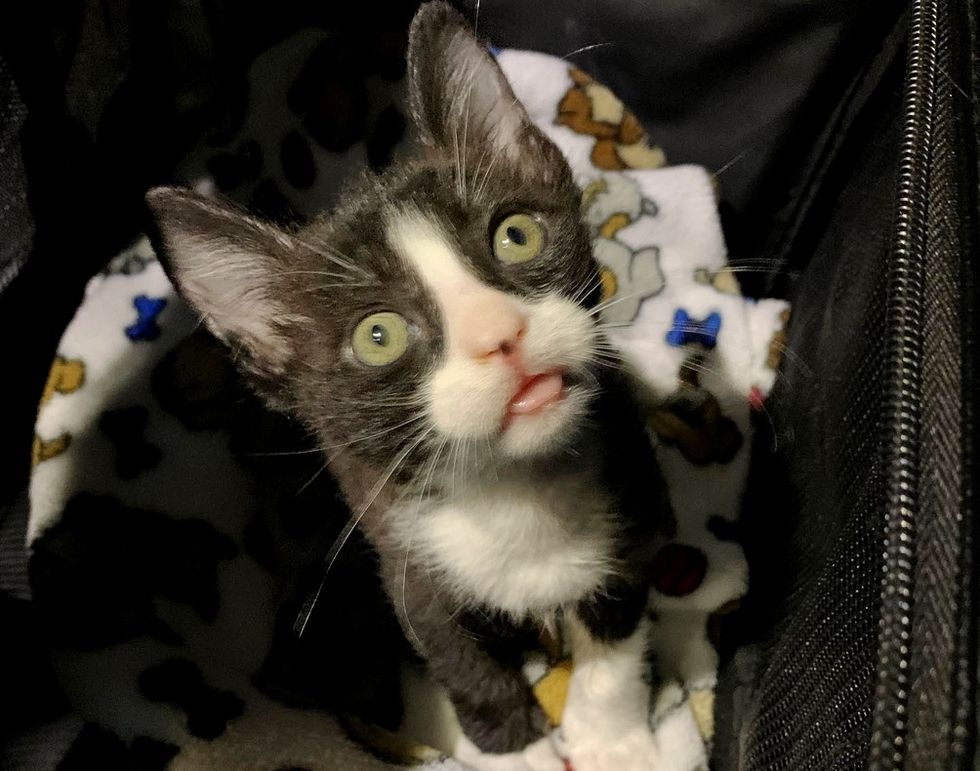 Related story: Kitten With Only 2 Legs Hops Her Way into the Perfect Home