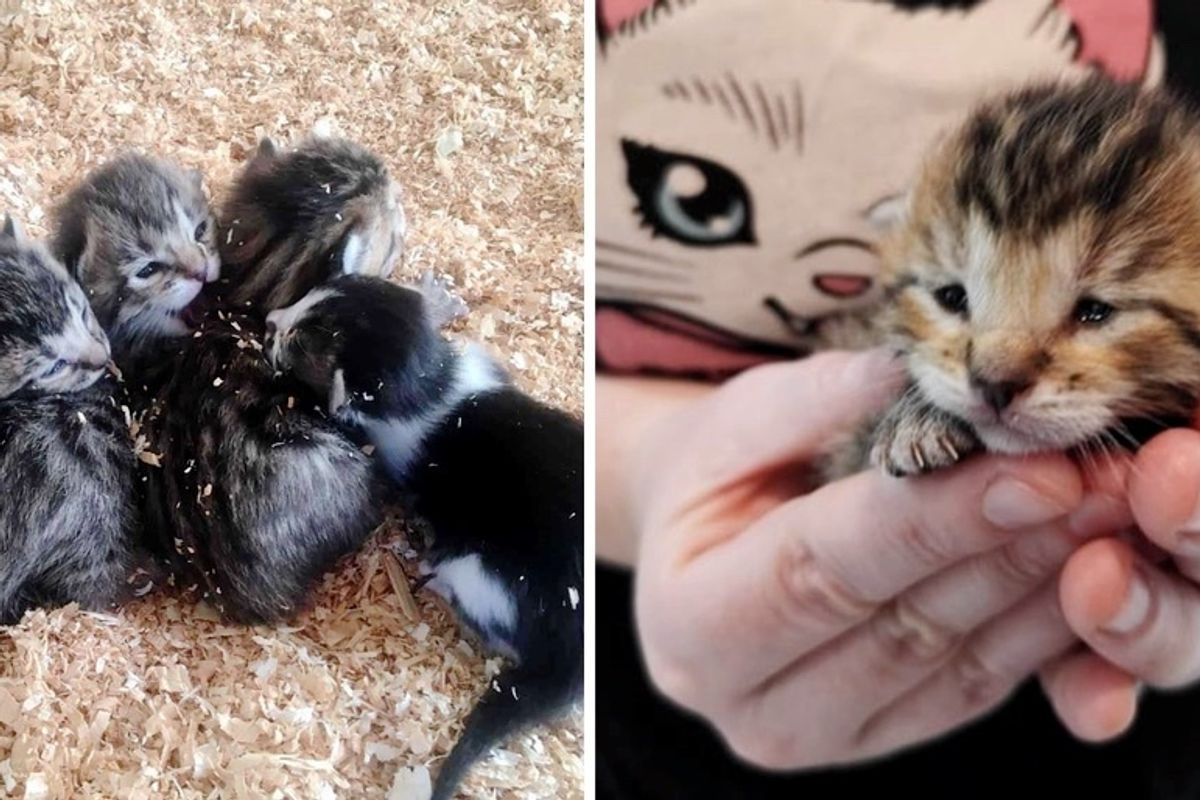 Orphaned Kittens Found With Tinier Adopted Kitty on a Farm, Have Their Lives Turned Around

A pile of orphaned kittens were discovered on a dairy farm. One of them came from a different litter.

These young kittens were found on a farm in Shuswap, British Columbia (Canada) yesterday morning. The farm owner's daughter was out doing her chores when she spotted them. There were six little ones but only four survived.

"She called our rescue and Kelsey, our volunteer, went out right away. The kittens were nursing on a female cat who was already spayed, so she was not their actual mother," Barb, President of Shuswap Paws Rescue Society, told Love Meow.

"Normally kittens this age would stay with the mom, but there was no actual mother that gave birth on site at the time, and these kittens were very sick," Barb added.

Kelsey scooped them up and headed to the vet to get them checked out. On their way there, the tiny bundles of fur cuddled together and fell asleep on her lap.

The vet discovered that the clowder of kittens are, in fact, from two separate litters.

The tiniest one, a black and white kitten, is 3-4 days old and still has her umbilical cord attached. The other three tabbies are at around two weeks old. Their eyes have started to open.

All of the kittens are receiving antibiotics to help them fight off the upper respiratory infection.

Shuswap Paws Rescue is working with Okanagan Humane Society to get these kitties the help they need to thrive and a chance at a better life.

The kittens have settled in their foster home, finally have bellies full and a warm bed to sleep in.

Kittens found huddled together on a farm get second chance at life youtu.be

"When we got them into our care we did warm compresses on their eyes. They are on antibiotic eye drops and nasal decongestant drops to clear their sinuses so they can smell to continue to eat," Barb told Love Meow.

There's a large feral cat population in the area, and TNR (trap-neuter-return) rescuers have been working alongside the farm owner to get the kitties spayed/neutered and provide any help they need.

Sunny adores his little sister from anther mother and always keeps her company.

"This farm is caring for all the ferals and cats that are abandoned there. They have heated barns and lots of food every day, and staff look out for them and call us if they need help," Barb said.

So far, 25 adult cats from the farm have been spayed and neutered, and they are all well cared for and loved.

After a rough start to life, the three tabbies and their little sister are on the mend, eating well and already putting on weight.