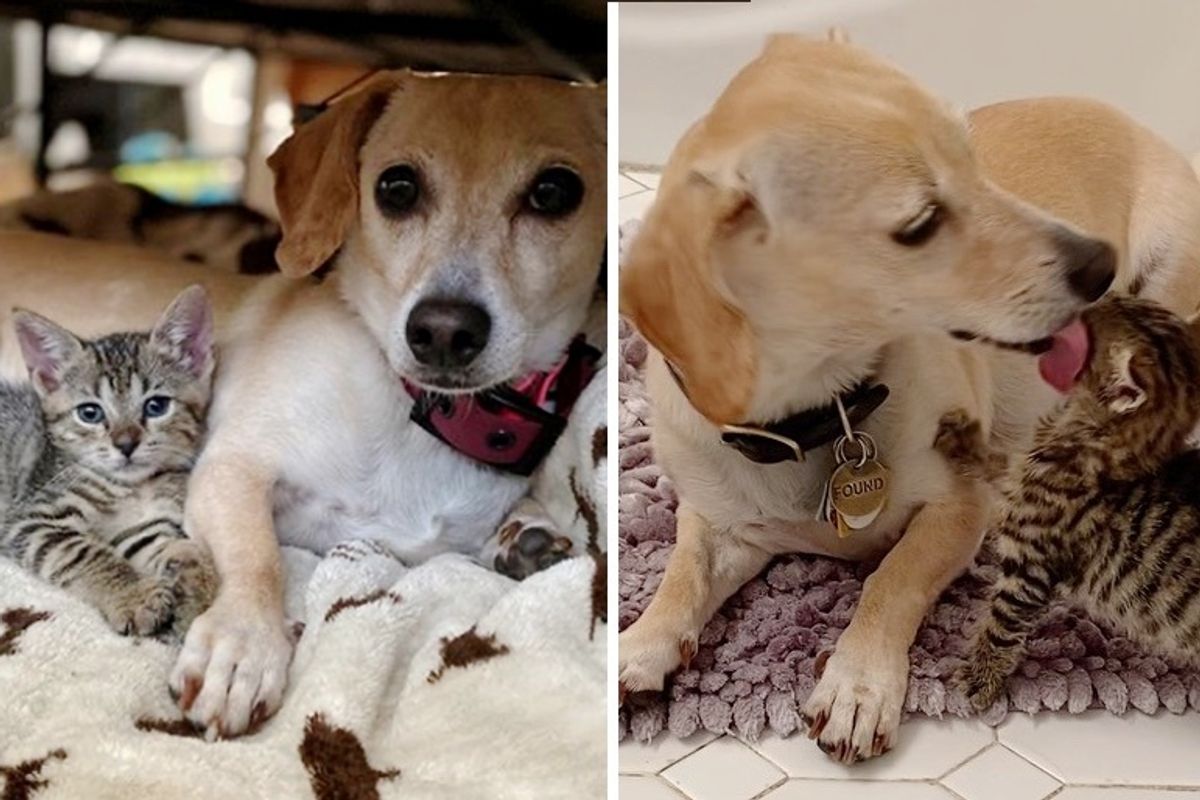 Two kittens found a sweet family dog to be their surrogate mom after they were rescued together. 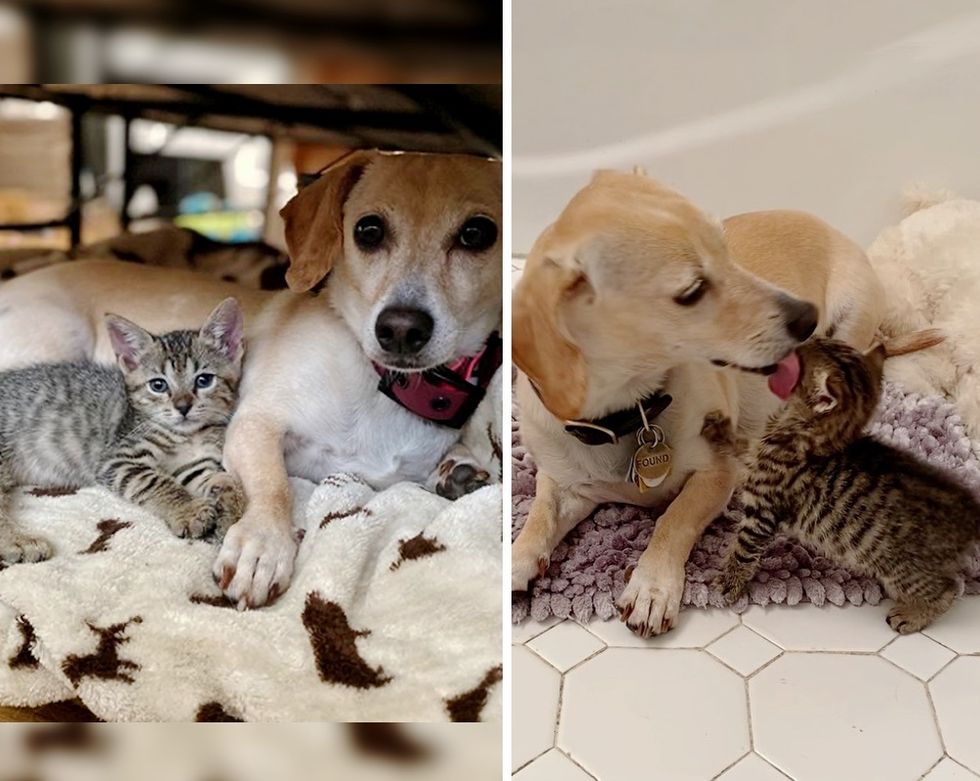 Three weeks ago, two tabby kittens were brought to the Manhattan Animal Care Centers (MACC) for a chance at a better life. They were found without a mom, clinging to each other for comfort.

The pair was in need of a foster home, so Asa, a volunteer of MACC, stepped up to help. She brought them home when they were around three weeks old.

The kittens, Gilligan and Milli, quickly came out of their shells and began to seek affection and attention from their foster mom. They were very young and eager for a mother's love. Asa knew just the perfect friend to introduce the kittens to. 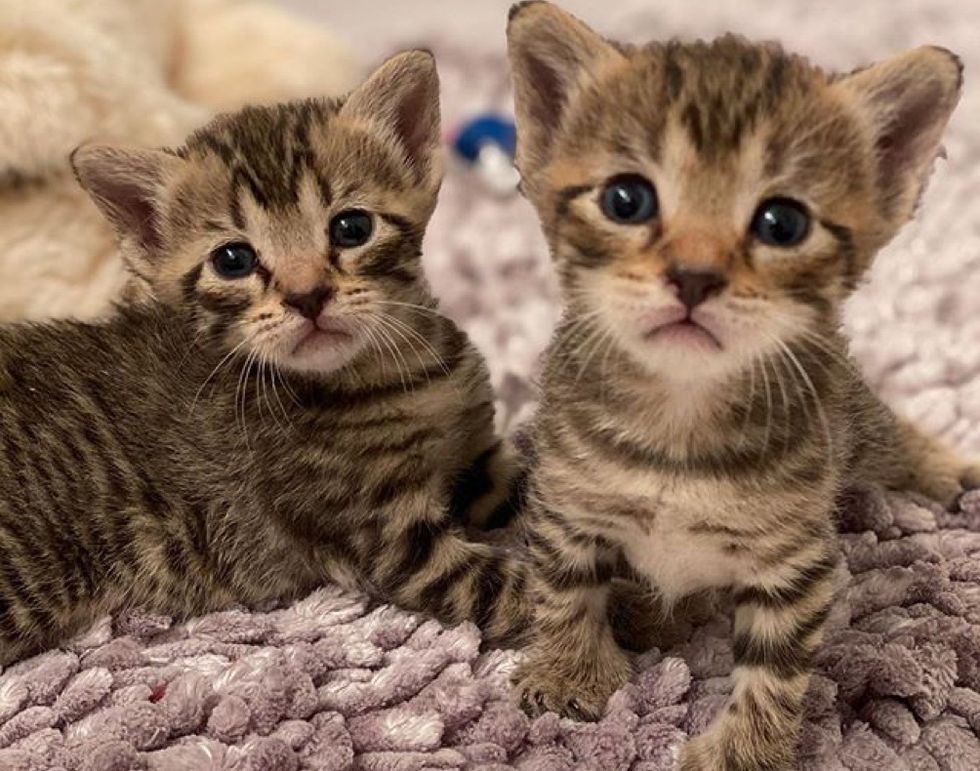 Asa's 7-year-old dog Kona has a big heart and strong maternal instincts for kittens in need. She was rescued with her three puppies, and was later adopted but returned to the shelter, twice. She had quite a journey until she found her forever home with Asa. "She came to me as a foster, and she ended up becoming a 'foster fail'," Asa told Love Meow.

Kona was excited to meet the tabbies as she could hear their tiny squeaks through the door. A few days later, the sweet canine stepped paw into the kitten room and immediately started mothering the new babies. 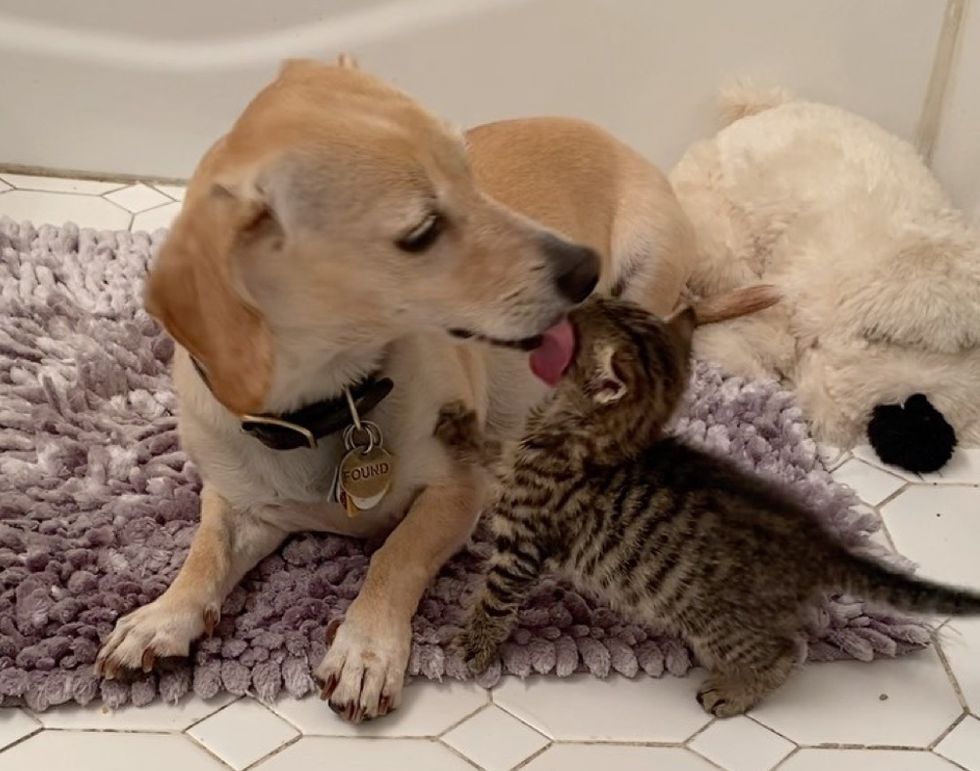 The feeling was mutual as the kittens walked right up to her, nuzzling into her face. They were an instant family. "It was love at first sight on both ends," Asa added.

The kittens gravitated towards their new mama. For the first few days, they tried to nurse on her and would cry to get her attention. Mama Kona licked their faces, showering them with love. 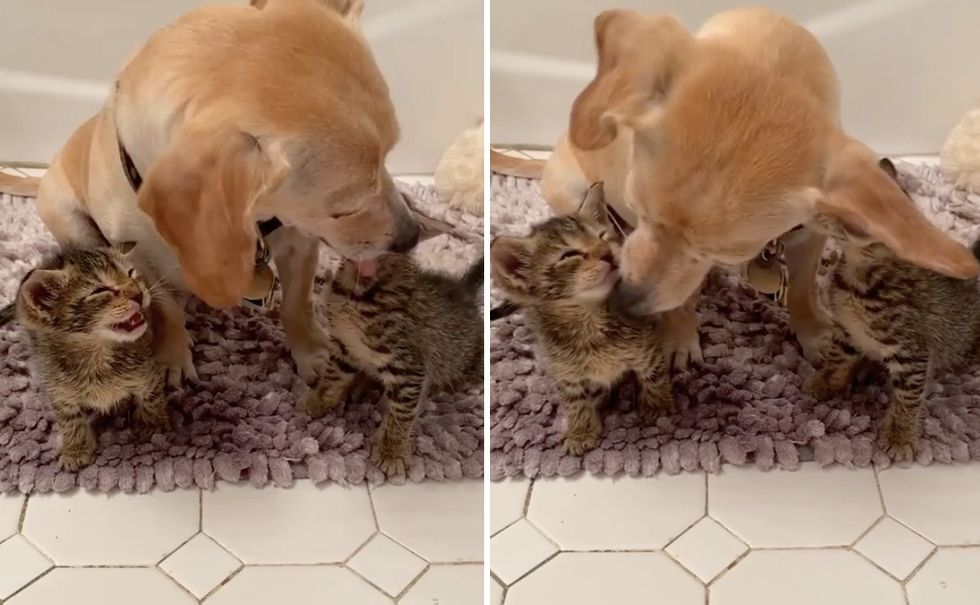 When Kona tried to cater to one kitten, the other started crying for her turn to be doted on. The loving canine found herself busy alternating mommy duties between the two needy kitties. She was in bliss, caring for the demanding little ones.

Kona watches over her feline babies every step of the way. If they wander off a bit too far, she will carry them back to the nest and give them a mandatory bath. 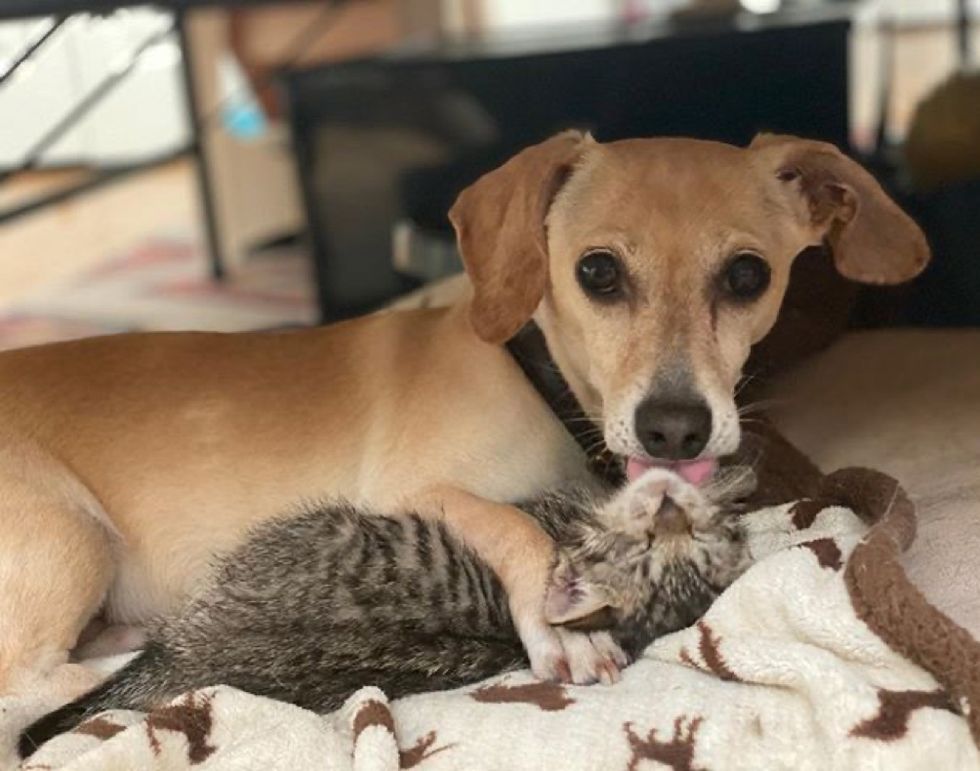 "Kona has always been a great mom to foster kittens but these two are the first ones she's ever carried," Asa shared with Love Meow. "She carries them to her bed to give them all the kisses in the world."

The kittens adore their canine mama and can't get enough of her attention. They snuggle with her in a cuddle puddle when they nap. As soon as Kona hears their cries, she comes running. 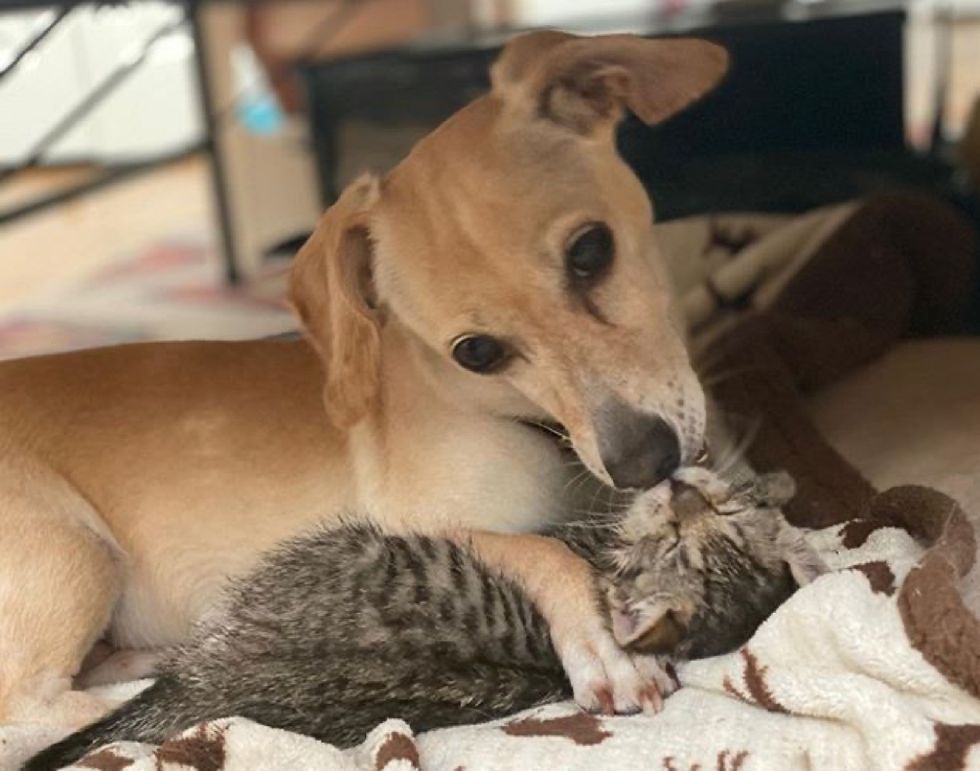 "Milli is more of a mama's girl. She'll somehow find her way to Kona. I keep finding them sleeping together," Asa said.

Watch the kittens and their canine mama in this cute video:

Dog and her kittens www.youtube.com

In a few weeks, the tabby kittens will be ready for their next chapter of life — a forever loving home. 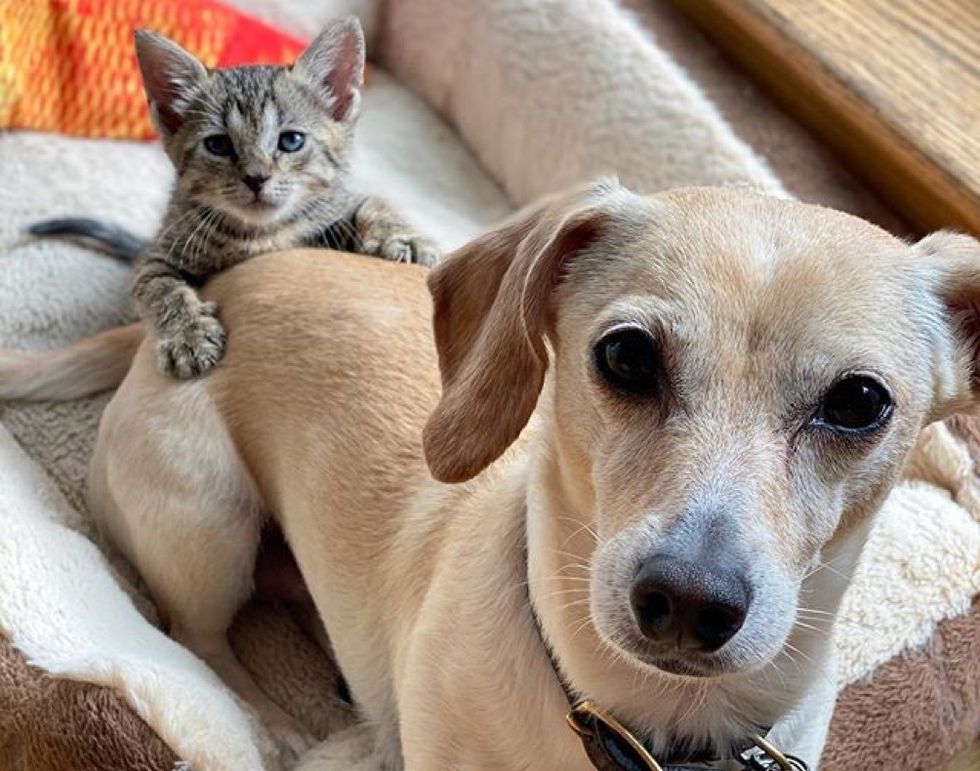 "Lil' Milli is the more needy one — she wakes me up every morning for breakfast but is also the cuddlier one who keeps running over to me to sit on my lap," Asa said.

"Gilligan is the more playful one. She likes to run around and jump attack my feet." 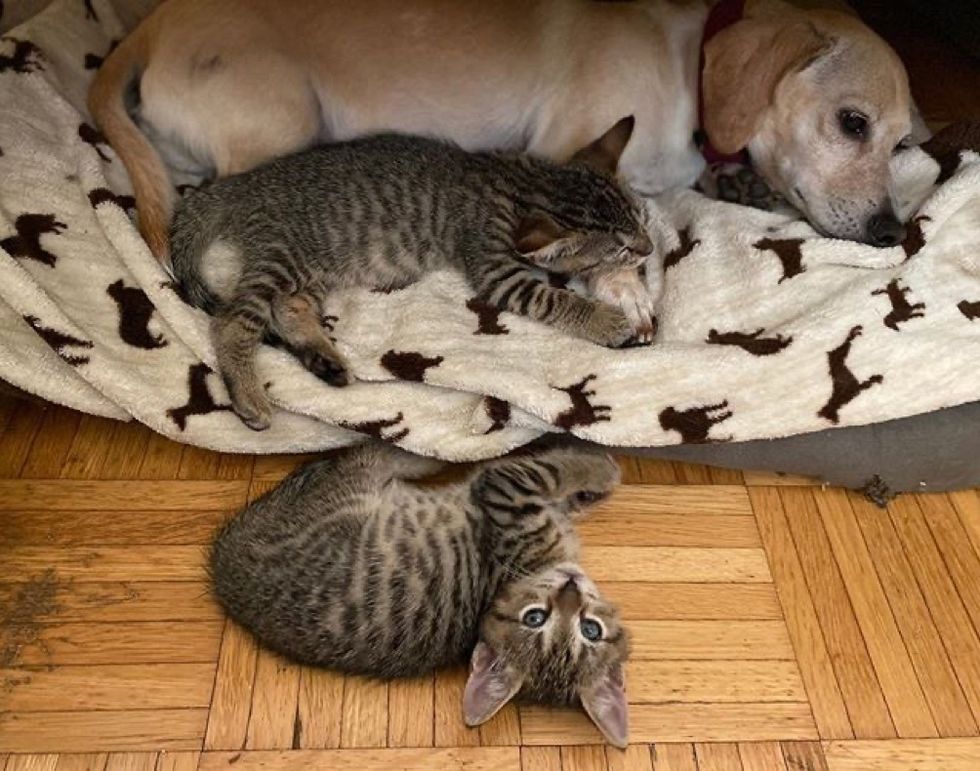 With Kona's help, the two feline siblings are thriving and growing by leaps and bounds. 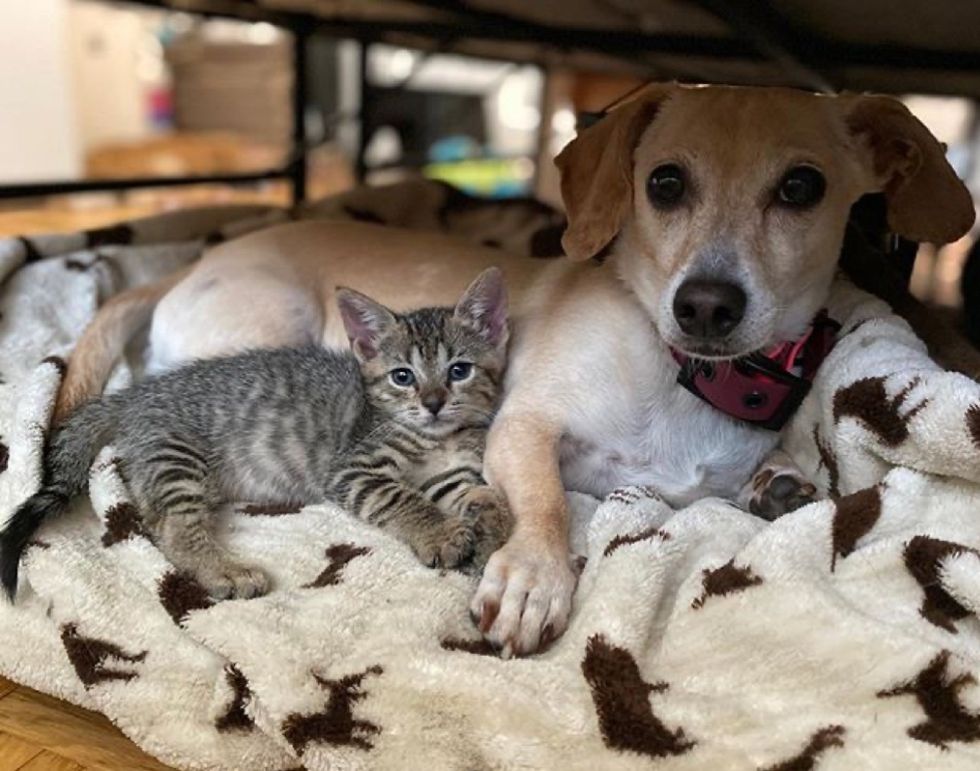 "The kittens are going be too big for Mama Kona to be able to carry very, very soon." 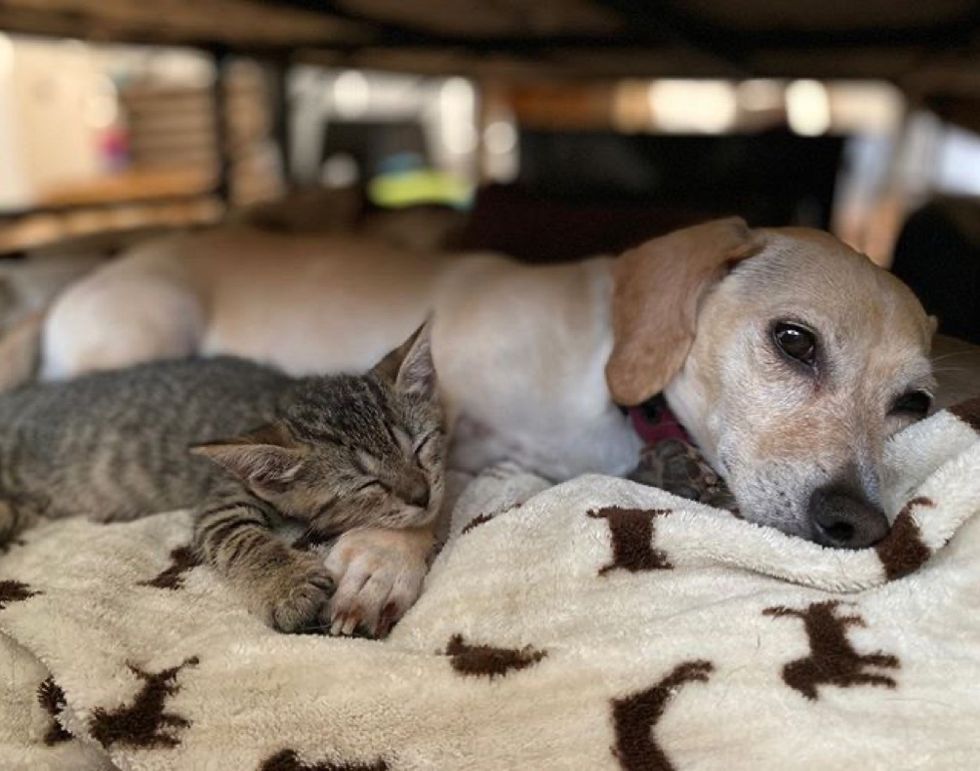