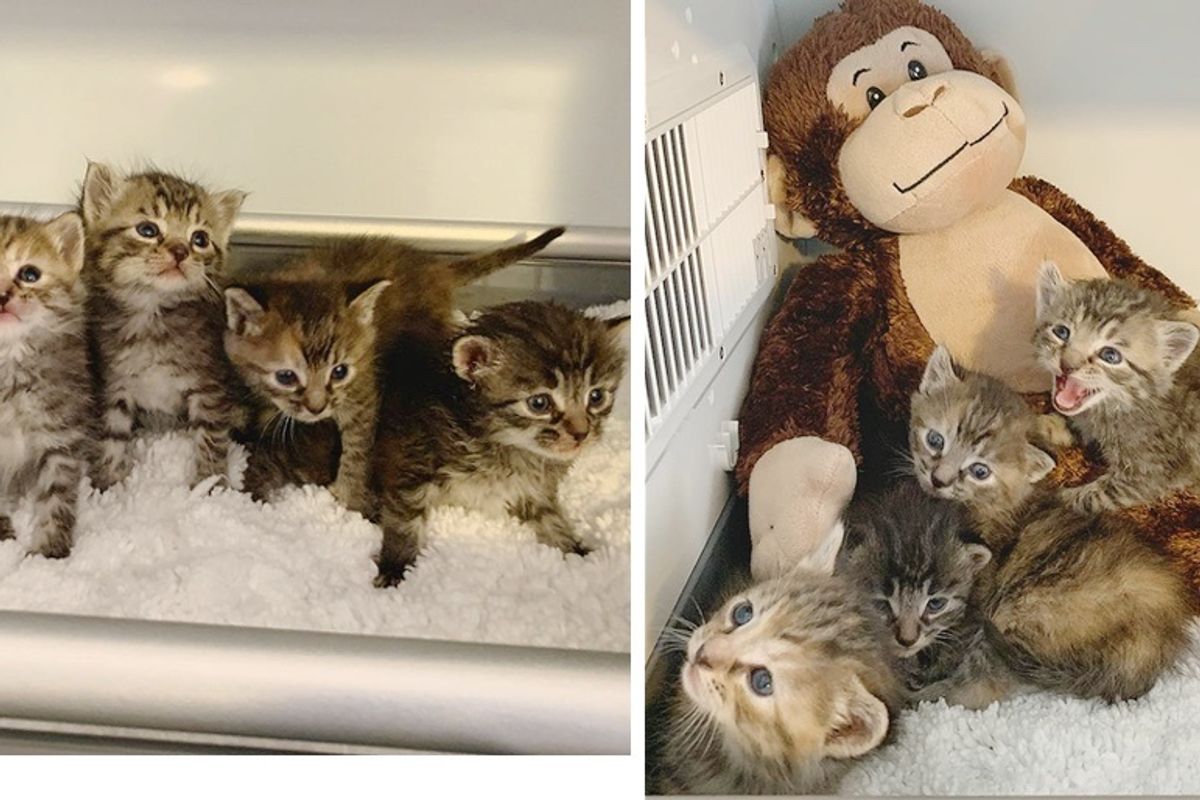 Four little kittens can now rest happily in a warm home, accompanied by a snuggle buddy after being found outside in the cold. 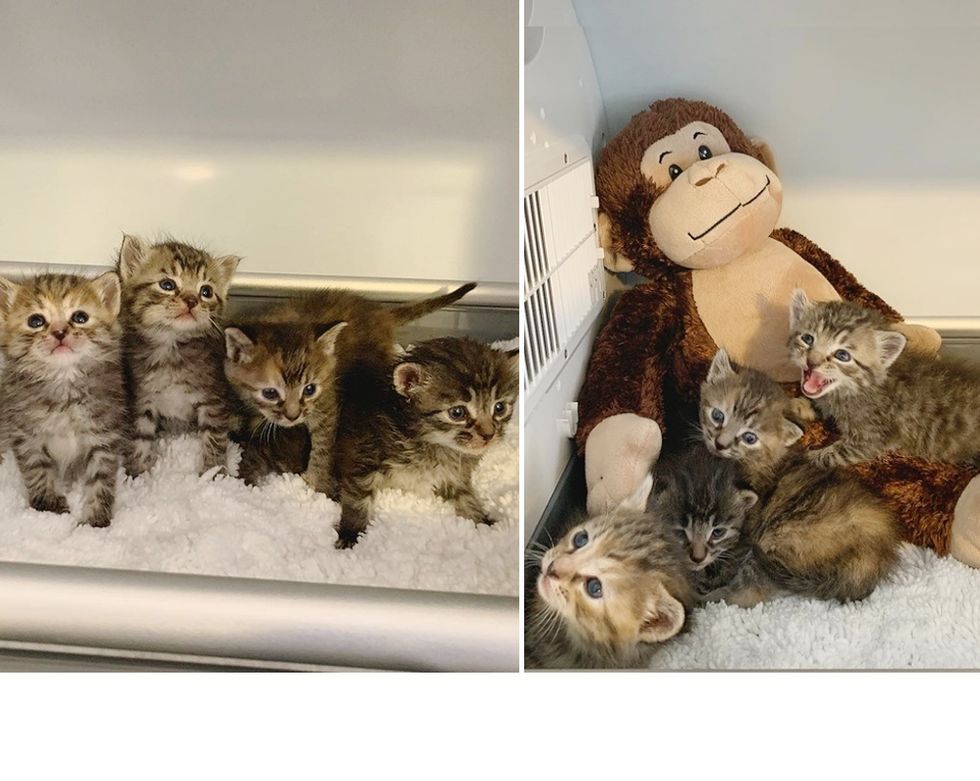 Sparkle Cat Rescue, an all-volunteer rescue in North Carolina, was contacted about a tiny kitten found on a resident's property. The weather was too cold for the kitten to bear alone, so the finder reached out to the rescue for help.

"He was found by himself Monday evening (a week ago) and taken into the vet where they cared for him overnight," the rescue shared with Love Meow.

While the resident continued to be on the lookout for other kittens, she heard little squeals coming from a shed the next day and discovered three other tabbies, litter mates to the first kitten. They were cold to the touch as their temperatures had dropped to a dangerous low. 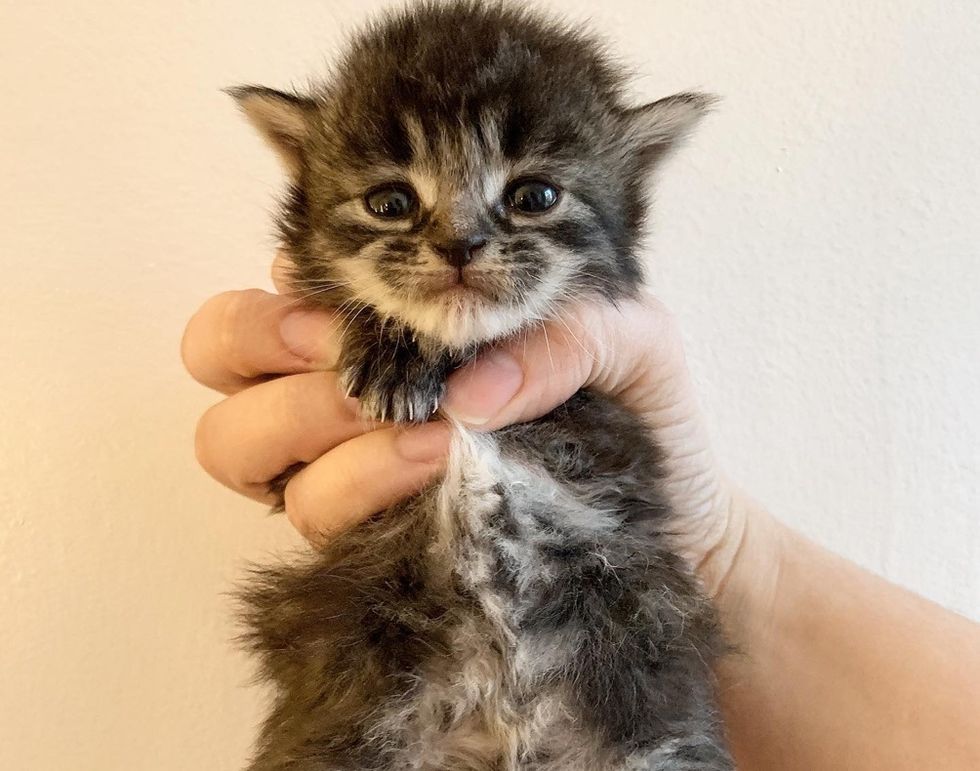 Sparkle Cat Rescue immediately took them in and began the process of reviving the kittens and bringing them back from the brink. "Temperatures were really cold here the night before they were found (and about to get a lot colder). They had a lot of warming up to do."

Sarah Kelly, an experienced kitten fosterer, stepped up to help. She placed the kittens in an incubator, which helped regulate their body temperatures. 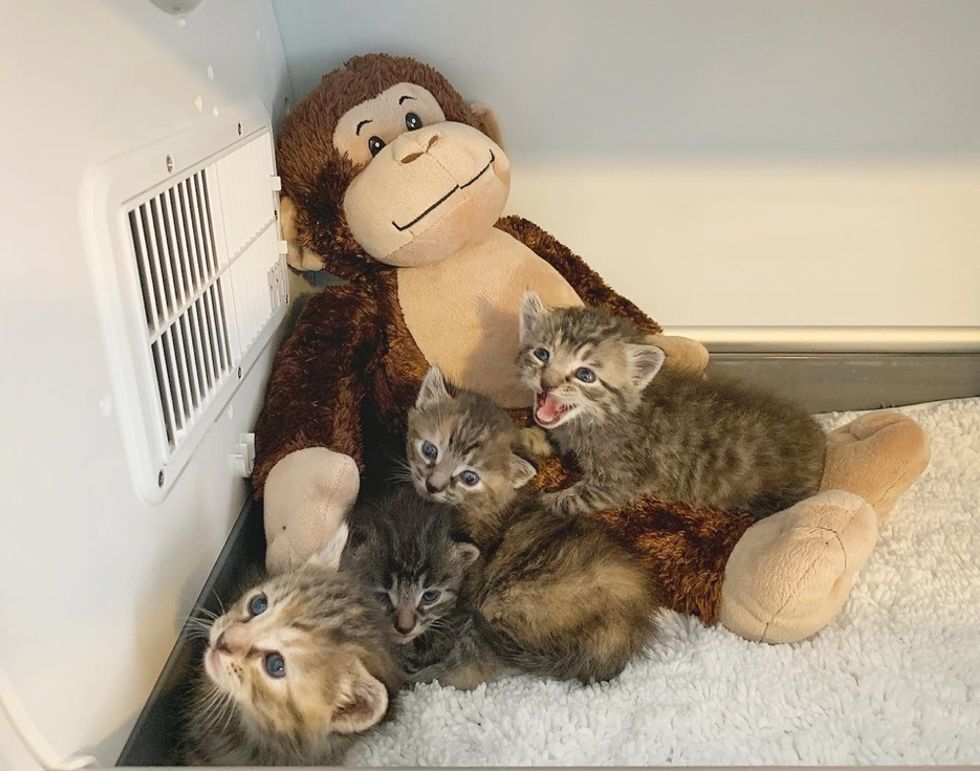 "We are so lucky to have the incubator for these little ones, as they were so cold upon intake and have struggled with low body temperatures," Sarah shared with Love Meow.

"It took several days for us to get them alert, active, and feeling well again. If they were outside any longer at all, it is terrifying to think what could have happened." 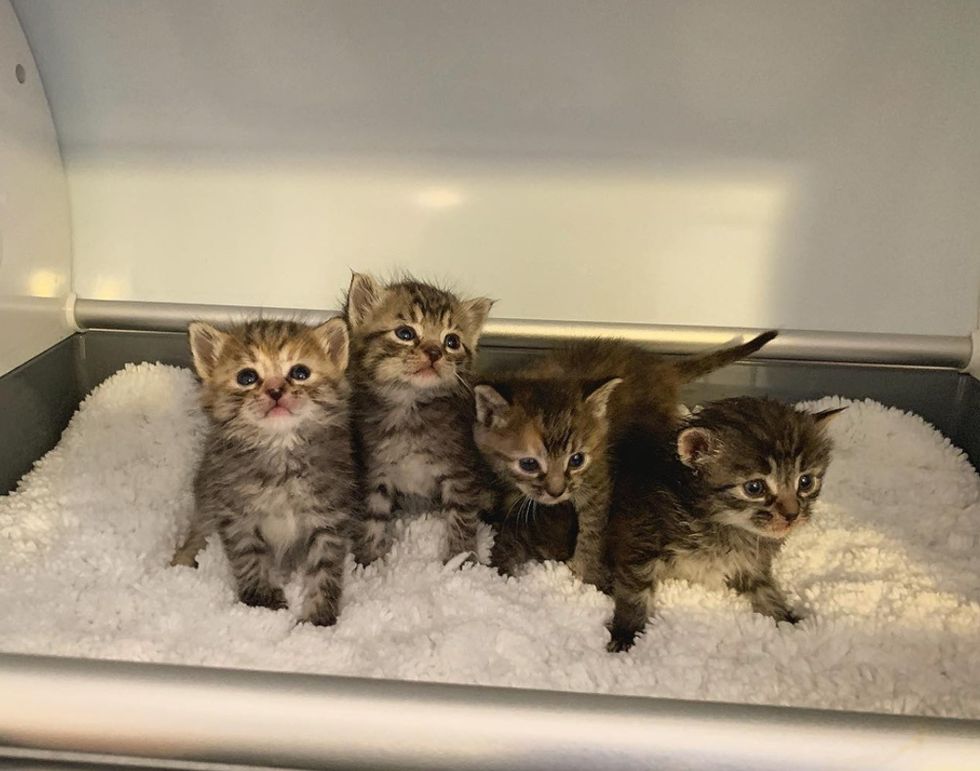 The first 48 hours were intense as Sarah worked tirelessly to nurse the feline babies back from the brink. As the kittens began to perk up and regain strength and appetite, they started to move around and even try to explore.

While they continued to heal in their cozy incubator, Sarah brought a snuggle monkey to keep them company 24/7. As soon as she placed the monkey in the bed, the tabby kittens nuzzled right up to her, purring away in bliss.

Now, they never nap without their mama monkey watching over them. 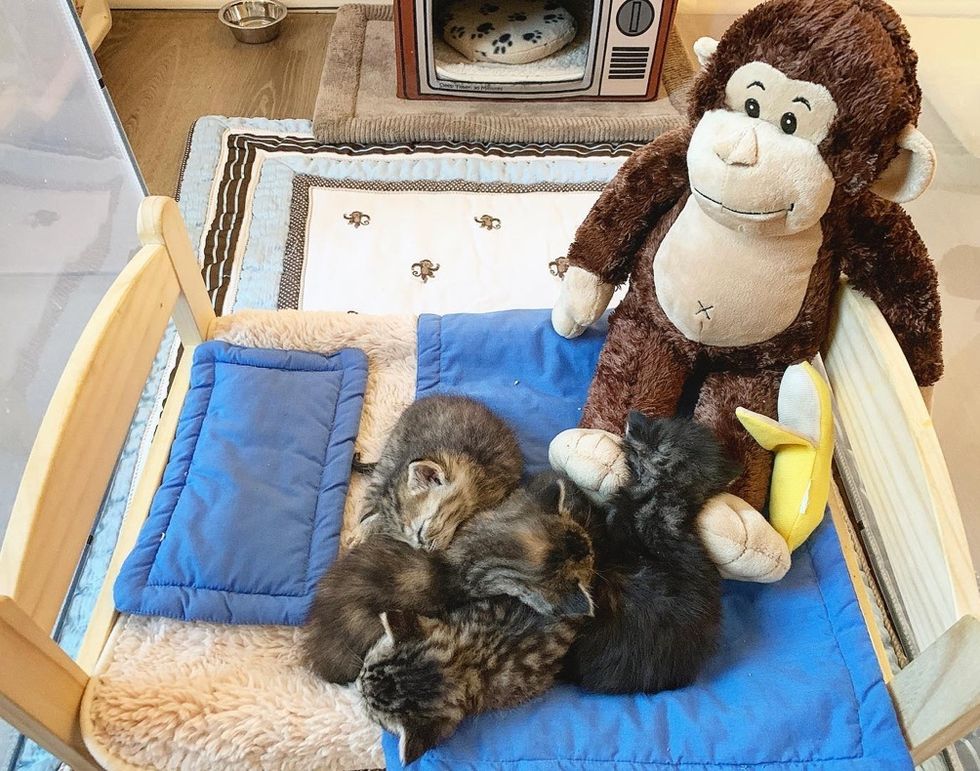 After days of painstaking care, the litter four really turned a corner and started to act like kittens again. Sarah and her family could finally breathe a huge sigh of relief. 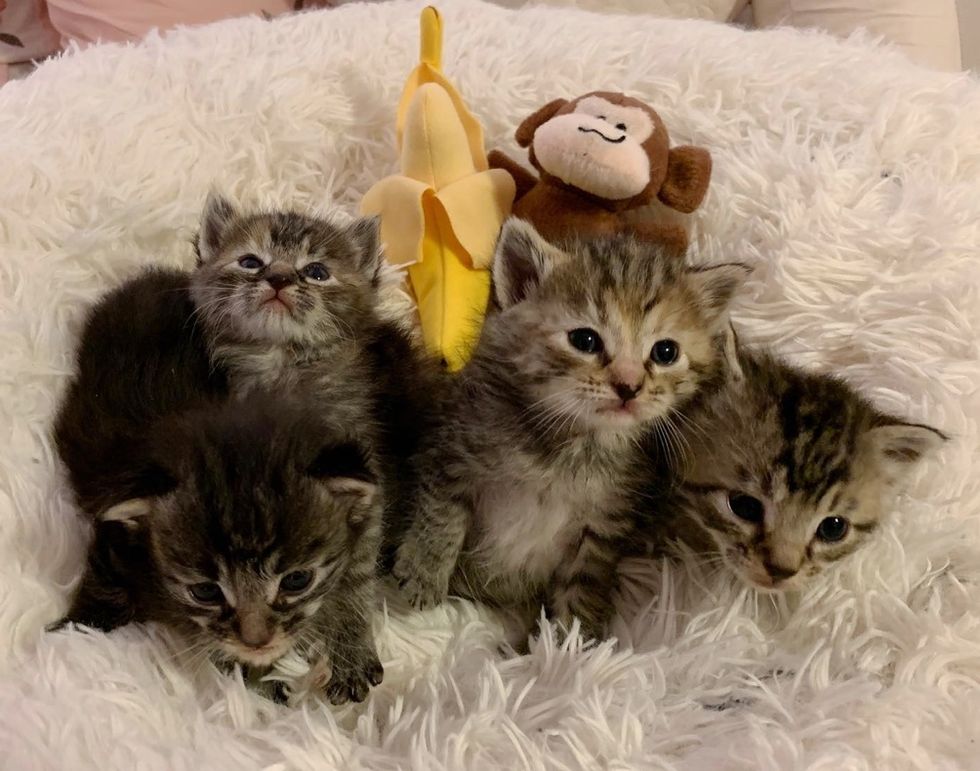 "These little ones aren't interested in formula at all and have had us pulling out all the tricks in the book to get them to eat," Sarah added. "On top of supplemental syringing of fluids, we are trying combinations of slurries (formula and canned food mixed up), baby food, and everything in between! It hasn't been easy but they are all so very worth it."

The tabbies will never have to spend another day outside in the cold. They are learning to eat solid food, working on their gait, and loving their VIP life as indoor kitties. 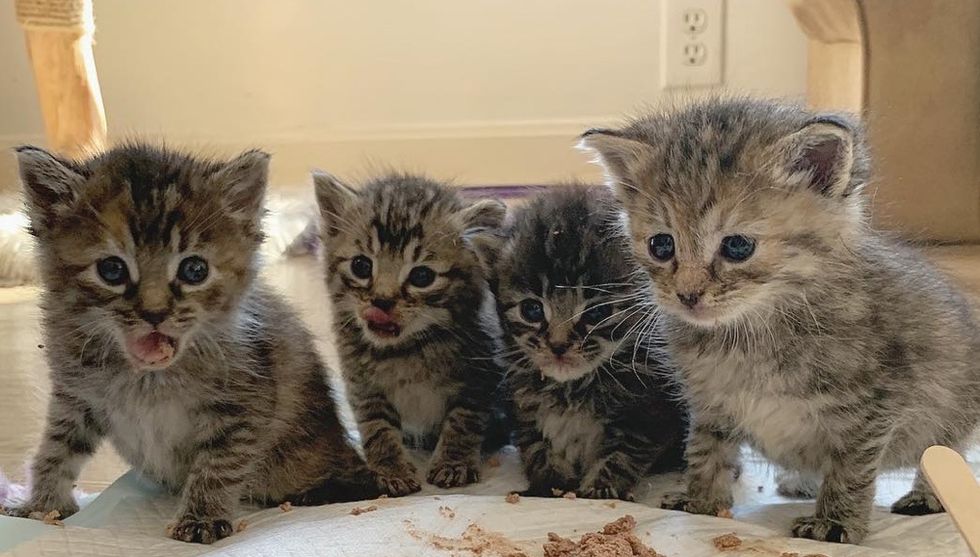 They have moved into their upgraded foster suite with many comfortable warm beds and plenty of soft things to knead on.

Their mama Monkey is never far from them. After waddling about in their new digs, they will cuddle in a purr pile next to their faux momma and fall asleep by her side. 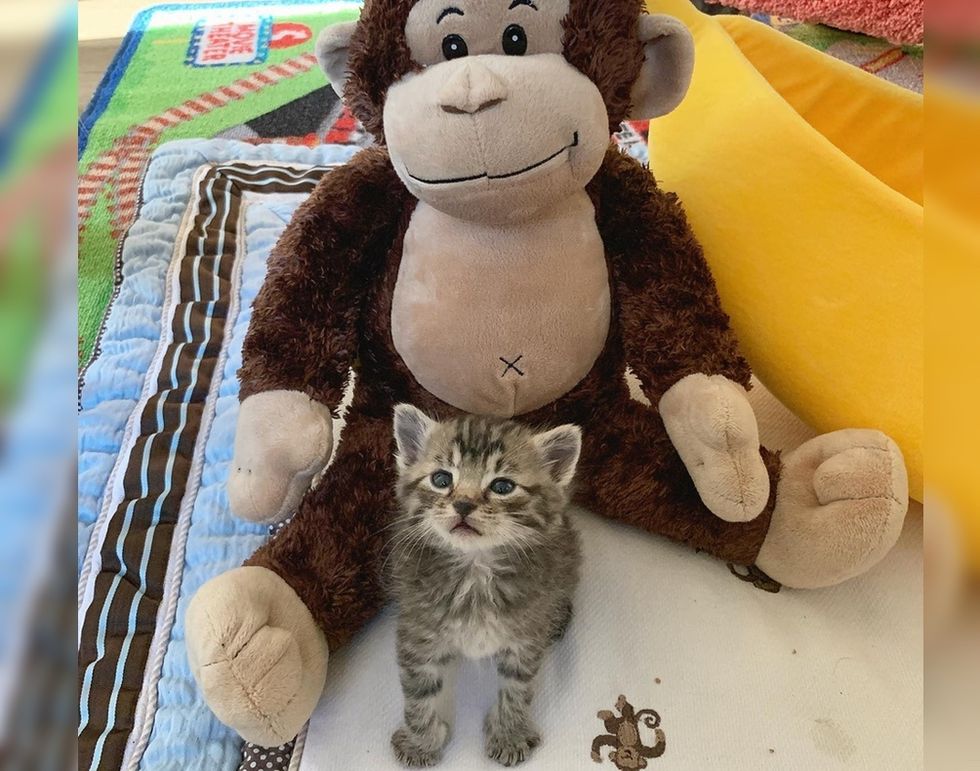 Related story: Kitten Found in Backyard Has the Sweetest Face and Fighting Spirit